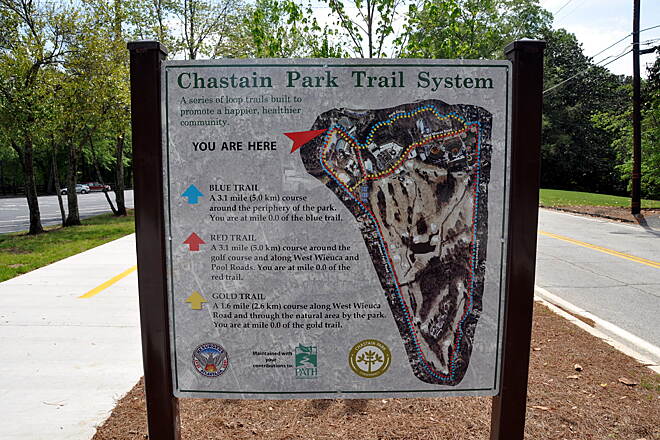 View Trail Map Send to App
This 3-mile path around Chastain Park in Atlanta is one of PATH Foundation's most popular trails (the PATH Foundation is a non-profit organization dedicated to developing a multi-use network of greenway trails throughout Georgia).On any given day you can find joggers, dog-walkers, cyclists and rollerbladers enjoying the trail.

From midtown Atlanta, go north on Peachtree into Buckhead; pass Lenox Square and Phipps Plaza then turn left on W. Wieuca. Continue on into the park or turn left on Lake Forrest Road.

I’m in wheelchair for one and half mile roll of flat and up hills, but I made it for being 78 years old. My daughter helped me up most of the hills. The dog came along and enjoyed it, too. Was a good morning walk. Lots of rest and water stops.

beautiful but some spots narrow for biking with kids

Gorgeous area but for biking with kids there are a few areas that are very narrow. Not such an issue with adult bikers, but a bit more of a challenge when riding with kids and trying to stay clear of the heavy foot traffic.

You can make it easy or hard

There are enough long flat stretches that can be walked back and forth as well as small and big hills for a more challenging walk. There are restrooms at the Tennis Center as well as those marked. Most folks pick up after their pets.

nice trail in the heart of the city

Good mix of flat land and some elevation passing through the Chastain neighborhood, houses and the inner nature walk. Street Parking is convenient. Less nature exposure but well located in the city.

This is a wonderful trail offering an escape from having to wait at traffic lights while out on a run. It is wide enough to not feel too crowded and circles around a very scenic golf course. Only complaint is that it is mainly concrete, but that is difficult to avoid inside the city perimeter.

3 Stars as a Mom pulling a Toddler in a Bike Trailer, 5 Stars as a Pedestrian

This trail is beautiful! I give this only 3 stars because I pull my toddler in a bike trailer and there are a few very steep hills (granted, not very long) that I had to get off of my bike and push it and the trailer up. If I were walking, I wouldn't have thought twice about the hills. Also, there is a pretty long stretch where the path is along a street and the signage was not clear whether bikes needed to be on the street or stay on the path. I stayed on the path, mainly because I was pulling the trailer and the street was very busy and not bicycle-friendly) and it was too narrow for the trailer as I passed other people along it. I had to get off a couple of times and push my bike and trailer. If it had just been me on my bike, I would have had an easier time.