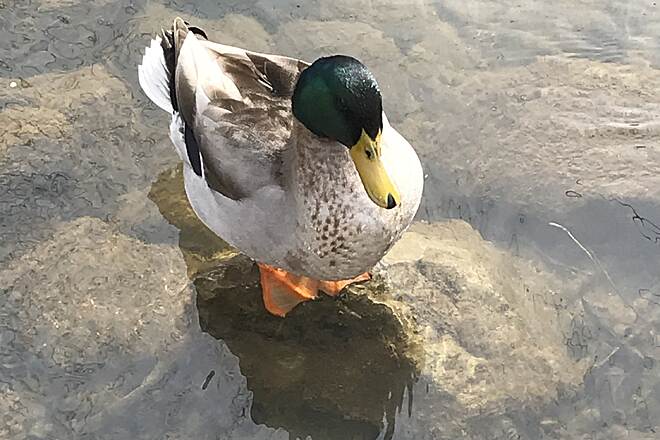 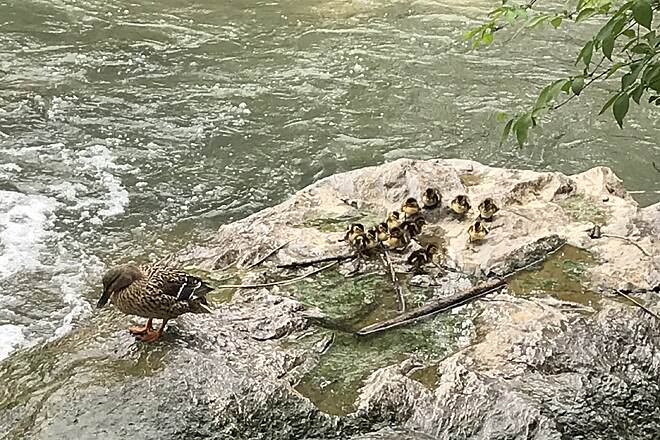 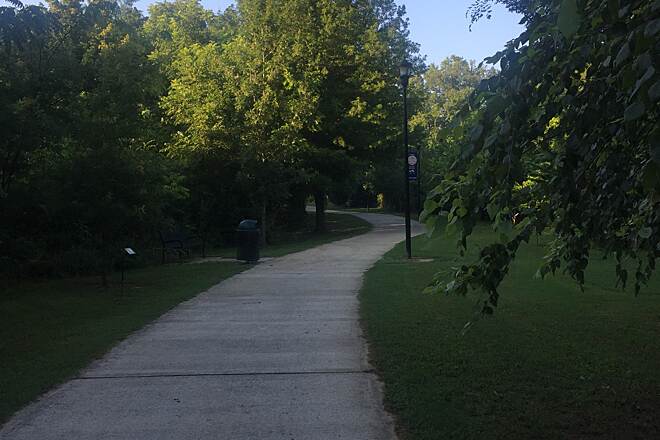 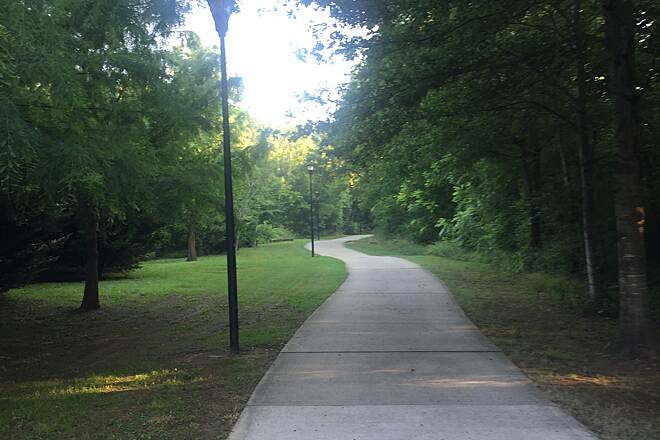 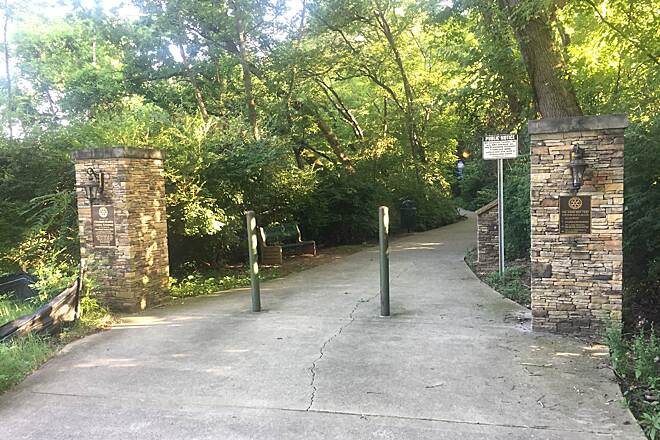 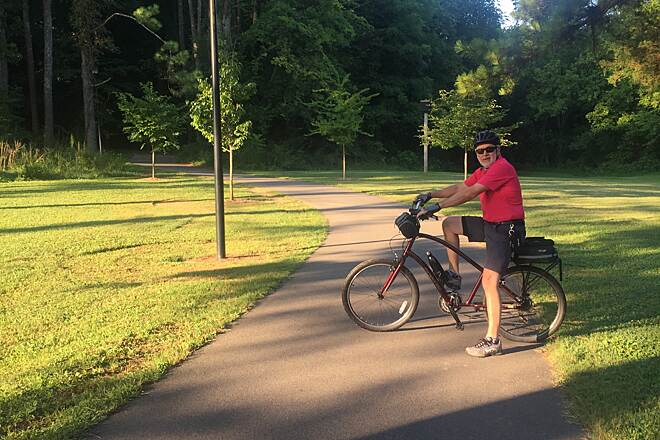 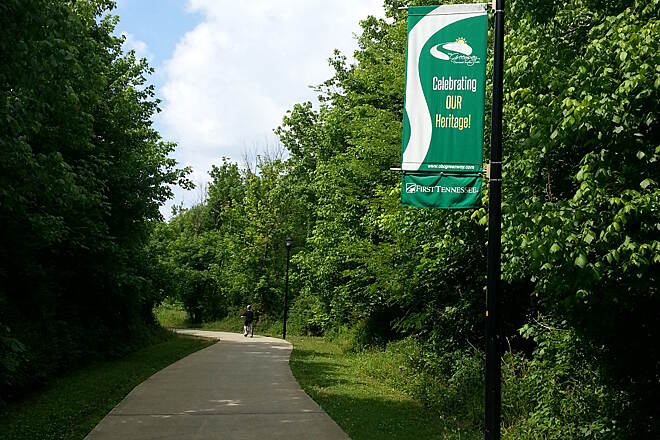 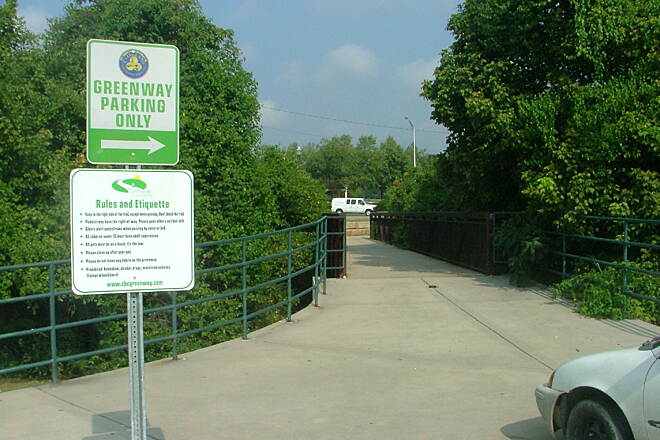 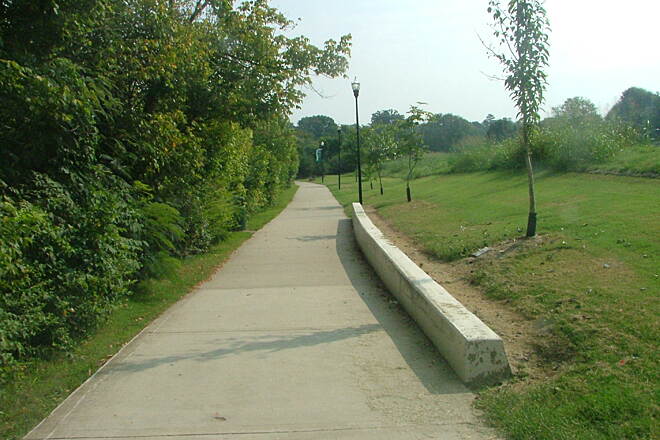 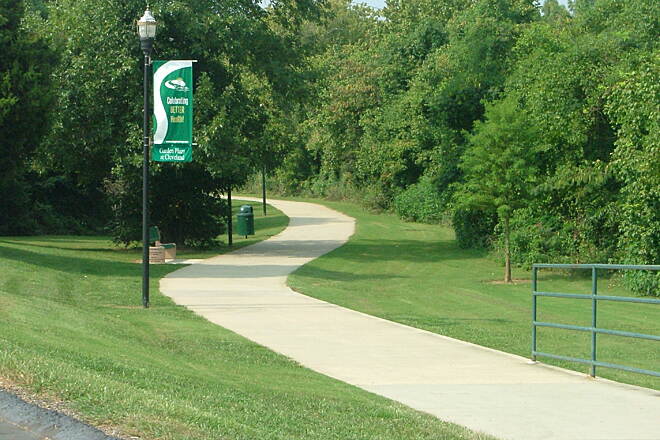 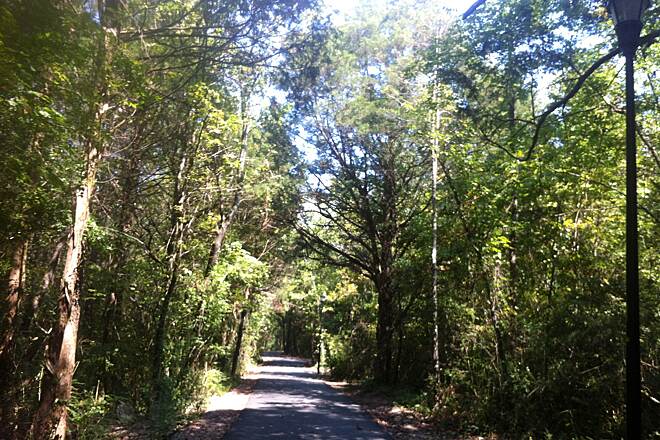 View Trail Map Send to App
The Cleveland/Bradley County Greenway weaves through the northern part of Cleveland, Tenn., from Willow Street to Mohawk Drive. The path follows Mouse Creek and includes three pedestrian bridges over the waterway.
Future plans include extending the trail to the Village Green Town Center, a business and retail hub, and the Hiwassee River in Charleston.
The Downtown Greenway Connector is accessible from all along the trail. It takes in historic sites and connects with the Cleveland/Bradley County Greenway at Willow and Keith streets. The route is marked with Greenway logos.

From I-75, take exit 25 and travel southeast on 25th Street toward Keith Street. Turn right on Keith Street and follow this street to Willow Street and turn left. The south terminus of the Cleveland/Bradley County Greenway is located at this intersection. An 18-space parking area is also available at the north end of Harris Circle NW.

We rode this trail yesterday and enjoyed the shady, easy ride with concrete in good condition, light posts, markers for trees, plants, and plenty of access points with benches to rest and reflect or even picnic. The trail follows Mouse Creek, and we did note mud under a bridge that could be a hazard if going too fast, but no problems for us. We were glad to see that they had a sign that an additional grant for 1.6M was available to extend this trail as our only disappointment was it was too short. This trail was easy to access with plenty of parking at different areas, we will be back!

Cleveland, TN
My husband and I ride our bikes the entire Greenway route, including the connectors. The Greenway is maintained by the city of Cleveland and the staff does a wonderful job clearing debris off the Greenway route plus removing the sand/mud from under the bridges along the Greenway. We enjoy and recommend using the Greenway!

My wife and I went here today for a bike ride and by far this is the best trail system we have been on. Impressed with the cleanliness and beauty of the area.

Sets the Standard for a Tennessee Greenway

Wonderful example of uniting retail, residential and recreational facilities. The park is as functional as it is recreational and boasts tasteful public art and a good balance of sponsor recognition. Plenty of shelters, restrooms, and benches dot the trail. Trail lighting extends usefulness. However, the Creek is the main attraction. Undergrowth really should be cut away in many places to expose the massive rocks and noisy cascades. One of the best greenways I've experienced.

I've been walking, running and cycling on this trail since its creation, and while it is better than nothing, I find that the Greenway has some definite issues compared with other similar town Greenway Trails withiin TN and other states I've lived in.

With its proximity to Mouse Creek, and various low points going under roads, it is very prone to flooding at multiple points. Can't tell you how many times I have had to leave the trail to "portage" via roadway or other means. And when the water subsides, it leaves piles of trash, debris and a muddy mess.

There is also very little adherence to guidelines by cyclist vs. pedestrians vs. kids on scooters, the picking up after dogs, loose dogs and other problems. I've seen accidents happen on more than one occasion due to collisions, etc. On weekends and other busy traffic times, I avoid using the trail as it is more of a headache than it's worth. Cyclists not yielding to pedestrians, kids/people not paying attention, dogs lunging at each other....

But one of the biggest and most recent issues for me (personally) is the increase of transients and homeless people making it a hangout at various points. One person (or more) even set up a ramshackle shelter and encampment off the trail near one of the marshes - the area behind Lowe's. I've heard parents complaining about some of the people hanging out near the playground and loitering in the pavillion. I've seen guys who seem to be living out of shopping carts and plastic trash bags, set up "camp" for the day directly along the side of the path. While some of their activity is not necessarily illegal, some of their behavior and possible instability (from whatever source) is troubling. At least one man, talking to himself, appeared drunk or on drugs or mentally unstable - or all of the above. He may have the right to be there, but it does not make it an appealing place, or feel like a safe place, for me to walk/run/cycle.

As a single woman, it makes me increasingly uneasy to be on parts of the trail that are not exposed to roadways and public view, or are within the more secluded areas like Tinsley Park. I think its only a matter of time before some kind of assault occurs, especially given the increase in vandalism and crime that has been documented with fixtures on the Greenway, and at businesses/property along the Greenway.

Peaceful, Serene and perfect for all.

Although I am from Monterey California and have a beautiful walking trail along the ocean, this walking trail offers such peacefulness and beauty. Whenever I visit my daughter and her family, I make it a point to walk as many days of the week on this walking trail. Very safe, well lit, not very challenging, which means that anyone can appreciate this trail. I love to stop along the side and take pictures of plants, flowers, natures beauty I might come across. And there is almost always a friendly smile or a hello from others enjoying God's landscape.

The thing I like about it is that it's open 24/7 and is lighted the whole way. There are light posts every 60 feet or so. So even late at night you can still see to get in a nice walk.

My kids and I live near the south end of the greenway , near Willow st.. We absolutely love the greenway ! We can't wait until it goes down towards the village , everyone will be able to make a safe circle on the greenway connecting to ocoee st.

We love this trail

My daughter and I really love walking the longer part of the trail but haven't been on the one near Mouse Creek Rd. We like feeding the fish but would never go in the water. I would have given it 5 stars except for how much trash and debris that flows down especially after we have a lot of rain. Even my daughter, who's 6, talks about how bad all of it is for our environment. We still like going for walks, looking for birds and other animals, taking pictures.

Isn't there anybody/group that's supposed to take care of that type of thing? We've talked about taking trash bags inviting some friends and at least getting some things. But I'd definitely not let the kids clean anything out of the water. Yes it looks clean but with all the debris (tires, metal barrels, plastic, etc), I wonder just how clean it really is.