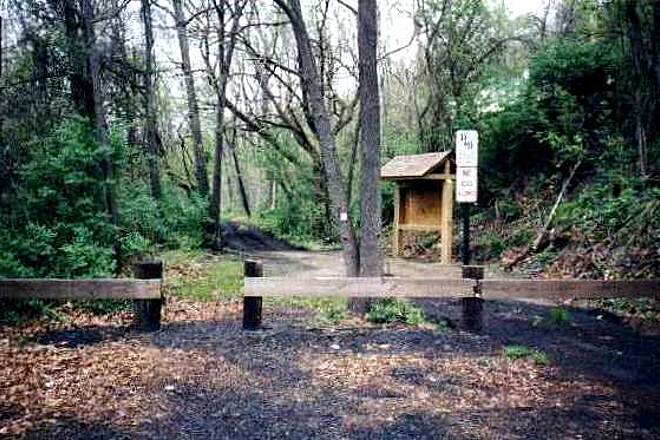 View Trail Map Send to App
The City of Port Jervis is the latest community to save a portion of the former D&H Canal and turn it into a greenway for use by residents and visitors. A section of the canal, which is approximately one mile long, has been cleared and opened for hiking and biking. Additional work is planned including more clearing of trees and debris in the canal.

Aside from the section behind a strip mall near the Metro-North train station, the canal walkway is entirely on publicly owned land or byways. The canal bed near the train station was destroyed years ago and what is left of the bank is privately owned and not accessible. The walkway was rerouted onto West Main Street until it turns northward onto Canal Street.

The trail is marked with 4" x 4" metal signs with the letters "D&H" embossed in burgundy on a white background. The restoration and creation of this greenway was made possible through the efforts of The Office of the Mayor in cooperation with the Department of Public Works, the Minisink Valley Historical Society, the National Park Service and the Delaware and Hudson Transportation Heritage Council.

Dogs are not permitted on any portion of the publicly owned canal towpath.

There is one dedicated parking lot for trail users at the intersection of West Main Street and Grandview Avenue.

Rode the Delaware & Hudson Canal Towpath Trail in Port Jervis. It's paved, but barely so, at most three feet wide, with rather a bit of a drop-off on the sides. It's like they just dumped some asphalt down and forgot to put some fill on the sides. Anyway, it's a pretty ride on the towpath, with substantial evidence of the canal on the northeast side, almost the whole way.

An Unusual Setting For A Towpath Trail

"As the accompanying trail description indicates, this section of the former D&H Canal towpath in Port Jervis, NY, has been recently cleared and opened to the public as a greenway. On the day I visited this publicly owned and operated facility, there were many clues that work here is still in progress. Weekday trail users might expect to encounter construction workers clearing trees, removing rubbish, and/or grooming the trail surface at anytime within the next few months.

As of this writing the trail surface is completely flat and free of standing water. However, it appears as though the City brought in fill from other locations to insure such a dry and level surface. I encountered several stretches of large gravel, broken-up asphalt, and crushed glass. This might make travel for bicycle riders somewhat difficult, but those moving via foot will have no problems whatsoever.

This is an “out and back” trail; that is, the trailhead at West Main Street and Grandview Avenue provides the only access point at this time. There is ample parking at this location and evidence that the City will soon be erecting an informational display board immediately adjacent to the parking lot.

Unlike most canal towpath trails I’ve visited recently, which are located somewhat off the beaten path, this trail is located smack dab in the middle of a very built up commercial and residential neighborhood. The trail right-of-way is bordered on one side by the former D&H Canal (very shallow standing water there may mean biting bugs in the summer) and on its other side by an active railroad line. The canal was cut into the side of a mountain, which sets the trail at about 100 feet higher than the rail line.

The trail abruptly ends just prior to a heavy industrial park one mile after it begins on a busy residential street. Certainly not what one would expect of a canal towpath trail. Views from the trail consist mainly of the tops of nearby homes and industrial buildings, water in the former canal, and the side of a mountain.

If you happen to be in or near Port Jervis, NY and want to see some of the D&H Canal, by all means you should visit this trail. Don’t make a special trip there just to see it though. One interesting note is that the trailhead here is within an easy walk of Metro-North’s Port Jervis, NY, train station. Perhaps this makes it the only towpath trail of its kind?"