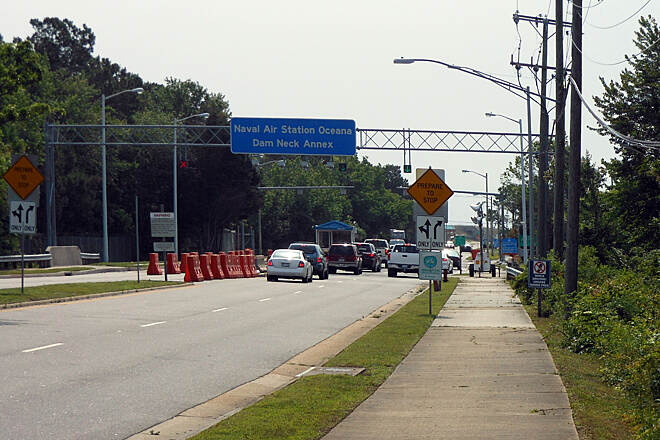 The Dam Neck Road Trail is one in a series of suburban trails in the Virginia Beach area for non-motorized use. The trail runs parallel to its namesake road between Salem Road and Terrier Avenue, along the southern border of the Dam Neck Naval Air Station. The trail passes among a few neighborhoods along the way but does cover more open countryside than many of the Virginia Beach area trails.

Near its eastern terminus, the Dam Neck Road Trail intersects the General Booth Boulevard Trail at the road of the same name.

Good trail to link up to other trails in the area. If you plan on starting from the west end of the trail be aware there will be no place to park. You have 7/11, CVS, or the Jehovah Witness church.
I used the JW's parking lot for a number of months because it was at the trail head and never had any issues. I always made sure there was nothing going on at their church before parking there and never left any signs that I was there. Any interaction with members (whenever I saw any) was positive. Again, I stayed away if there was any activity.
Recently after finishing a ride I was confronted by one of the members and asked if I was a "brother" and I told him that I was not. He then became angry and I was told I was trespassing and was NOT to use their parking lot. I didn't argue and left.

I Run this at least 3 times a week

The trail is asphalt all the all and pretty straight all the way down dam neck road. i see some bicycles on the trail sometimes but more runners. Most bicycles ride on dam neck road itself (which i wouldn't do). lots of trees really help keep the area cool.