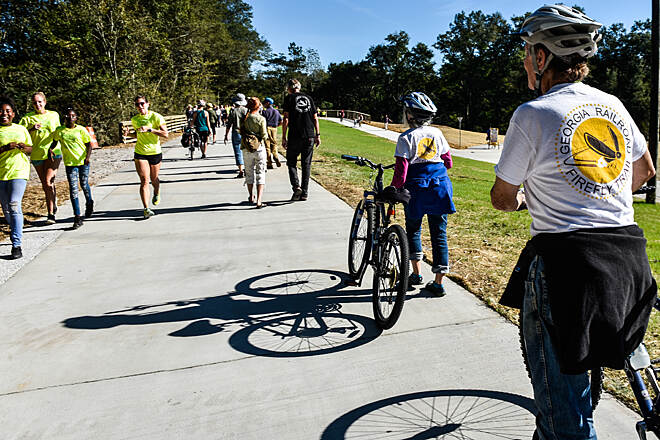 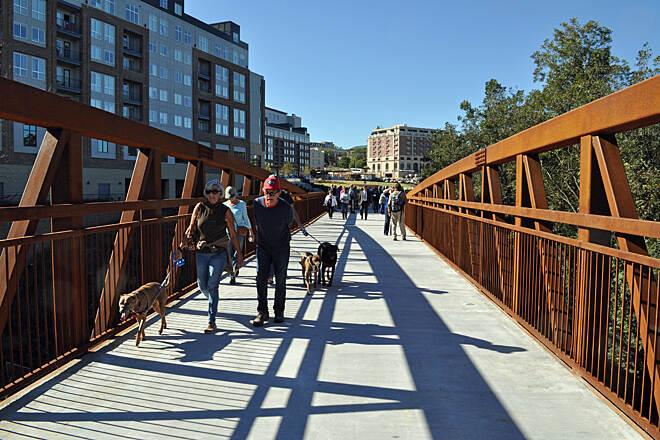 In the late 1800s, when the Georgia Railroad trains rumbled through the rural darkness between Athens and Union Point, embers would flicker in the night sky from the wood-burning engines. Farmers began calling the line “Firefly.” Today, locals are working to covert that old rail bed into a 39-mile multi-use trail.

In 2017, the effort reached a major milestone with the opening of the Firefly Trail’s first section. Athens, a thriving college town home to the University of Georgia, is the northern gateway to the rail-trail. The new paved pathway begins downtown at a trailhead on East Broad Street and travels through Dudley Park, which offers picnic tables and other amenities, as well as the opportunity to connect to the North Oconee River Greenway. A highlight of the rail-trail is the 500-foot long bridge rising 40 feet above the North Oconee River; it incorporates piers from the old Georgia Railroad and has large platforms for taking in the views.

From Athens, the Firefly Trail will eventually head east to Winterville and then south through a handful of small towns—many of which began in the heyday of the railroad—to end at Union Point. The rail-trail will roll through open fields, pastures and forested areas, where deer, opossums, armadillos, coyotes and many species of birds might be spotted. While the Athens-Clarke County section is surfaced with concrete, the rural sections of the trail in Oglethorpe and Greene counties will most likely be gravel.

In Winterville, the trail will pass by a few historical buildings, including the Carter-Coile Country Doctor’s Museum, which provides a rare glimpse into a rural medical practice more than a century old, and a restored train depot painted a welcoming yellow.