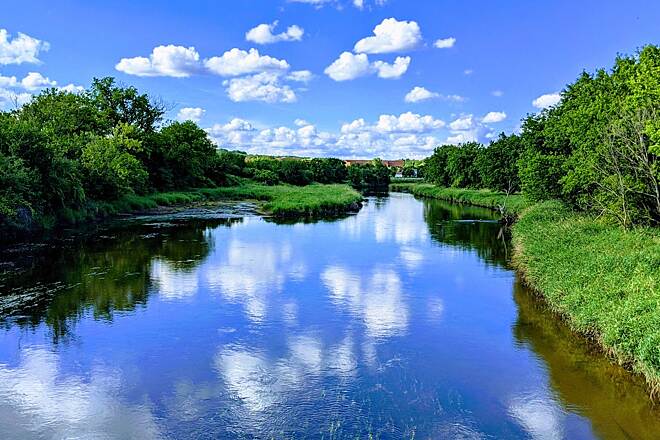 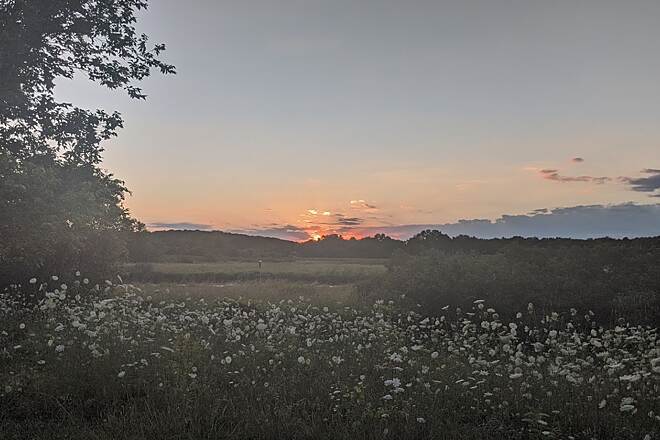 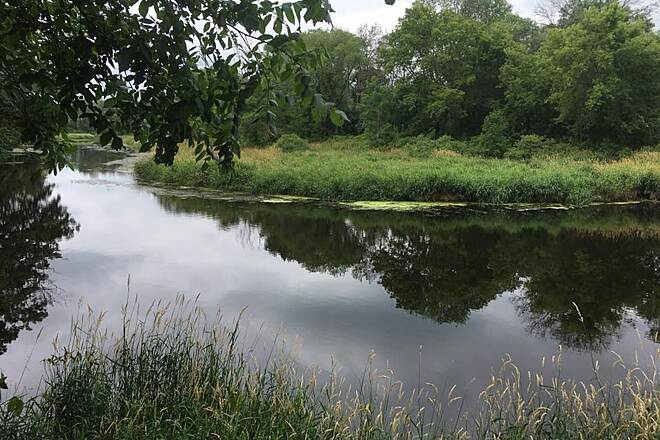 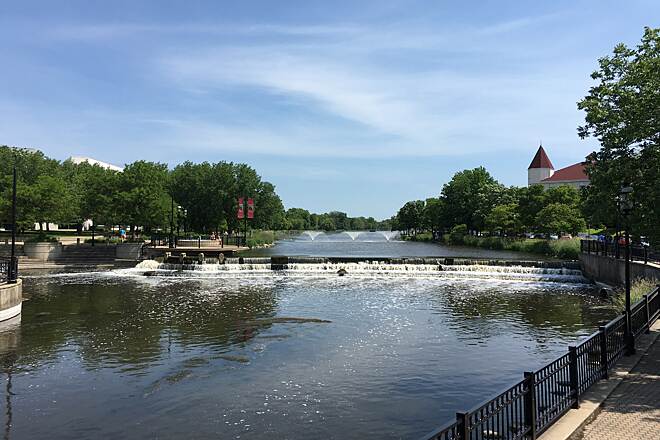 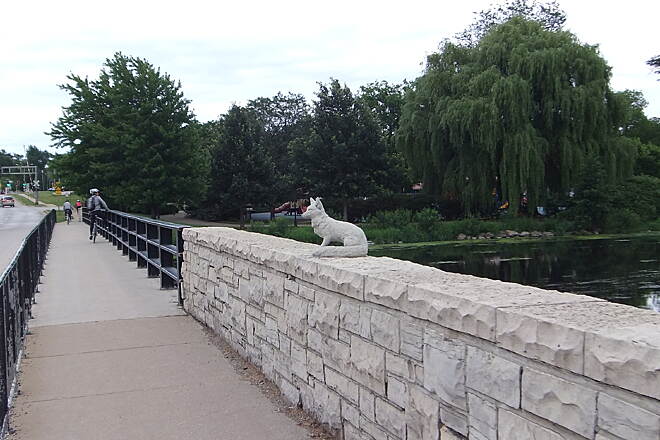 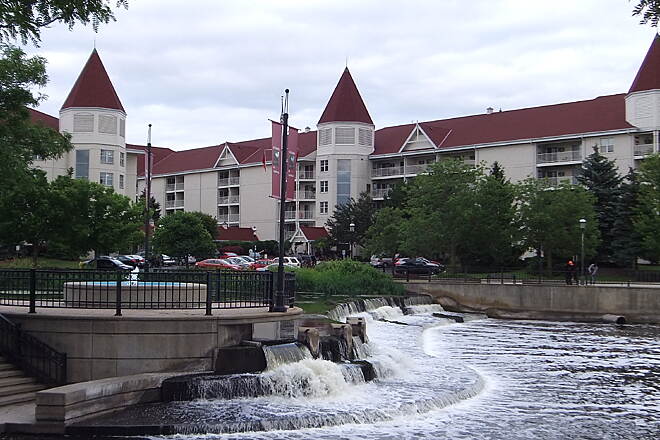 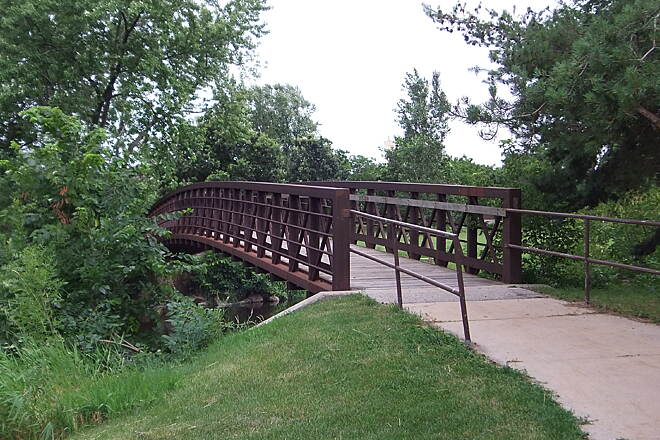 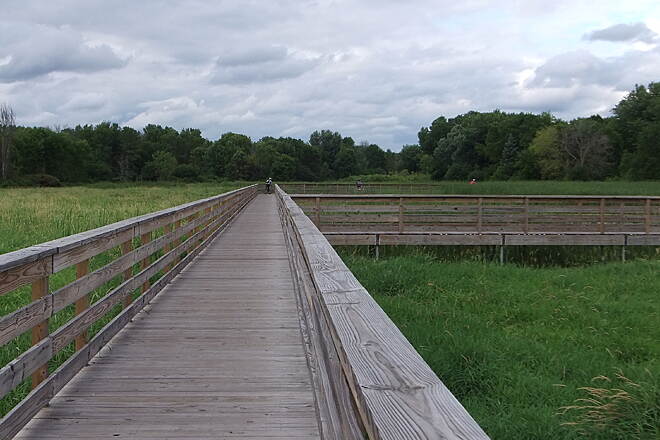 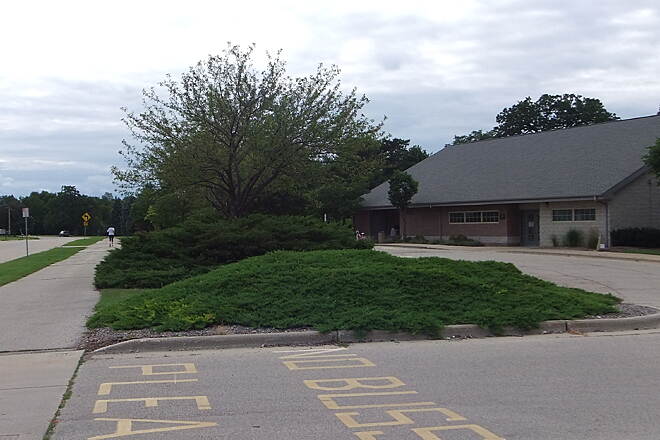 The Fox River Trail runs diagonally along its namesake waterway through Waukesha in southeastern Wisconsin (just outside of Milwaukee). A trailhead at the E.B. Shurts Environmental Education Center in the Fox River Sanctuary offers water, restrooms, parking and trail information.

At the trail's northern end is Frame Park, where you'll find a baseball diamond, boat ramp, picnic shelter, garden and playgrounds. Fox River Park lies on the trail's southern end. The 257-acre park is a beauty with wetlands, forests and wildflowers. A Nature Play Area offers rock climbing and two large slides, including one that's 32 feet. Picnic areas, observation decks and fishing access round out the park's many recreational amenities.

At West College Avenue (near N. Prairie Avenue), the trail connects to the eastern end of the Glacial Drumlin State Trail, which heads west toward Madison for more than 50 miles.

Parking is available in the Fox River Sanctuary at the E.B. Shurts Building (810 W. College Avenue), which serves as a trailhead, and in Frame Park (701 E. Moreland Boulevard). A small parking lot is also available off Sunset Drive adjacent to the Boardwalk (just east of Genesee Road).

I started my trek south on the trail from the EB Shurts Center, where there are restrooms, changing rooms and plenty of parking. The trail goes along Sentry Drive for a while, through an industrial park area then veers into a more natural setting of fields and wooded areas, all the while following the Fox River. It keeps getting better as you go south, as there are boardwalks and observation decks in the Fox River Sanctuary. After crossing Sunset Drive, you follow the the Fox River Parkway through a very pleasant riverside park. It returns to a blacktop trail that is especially scenic in the Fox River Park. There are several places to stop and admire the Fox River. The trail loops around in the park and returns north. While the trail actually starts north of the Shurt Center at Frame Park, I didn't feel like riding along busy College Avenue to rejoin the trail that leads to Frame Park. My afternoon ride was a very pleasant 10 miles.

south half is great biking

I enjoy jumping on at Wisconsin then south to the Fox River Park. Couple of stop signs and only one light. Watch at the recycle center though. The cars don't always watch.

I found south of college very enjoyable and I could gear up pretty easily. First time I started at the north end and lost the trail before college. Take your map to navigate the few blocks not well marked

Breaking my new bike decided to try Fox River. Except for wind being in the wrong direction I really enjoyed south of College Ave. downtown part has a scenic feel but with walkers and street crossings you have. To pay attention. Will definitely ride regularly.

OK, yesterday we ran the entire length of the trail, or what we thought was the entire length. I say this because once you hit a certain point in the trail, I believe it is the part over by the Soft Ball facility, it is not very clear as to where you should be going. We ran about 2 blocks down the side walks of some residential area and then hooked back up with another park but then that was short lived because we were back in the middle of a busy intersection with no clear direction again. It is an excellent trail up until about that point then it is just confusion. The good part is that this doesn't happen until you are almost close to the 5 mile mark, so if you had to you could just turn around at this point and back track and still get a 10 mile run in, or whatever your preference may be. Frame Park is a very beautiful park, but in my honest opinion it's not a good one for running. The brick side walks are just too hard on the limbs and in the long run (pardon the pun) are just not worth the possible injuries that running on that type of surface could cause. I would definitely recommend this trail for running but I would just do a turn around at the point where it gets confusing. Also there is a part of the trail that runs through and industrial area that does have some smelly odors, this may also bother some people, but here again you could also turn around at that point and still get some mileage in.

We used this trail for running. It offers a nice paved route with various scenery, from wooded areas, ponds, parks and residential. The scenery is really beautiful in the wooded areas of the park and provides you with such a variety that you won't be bored with your surroundings. I was most impressed by the extreme cleanliness and modern bathroom facilities at the far southern end of the park which was nicer than the bathrooms in most local restaurants. There are also bike riders and walkers on the trail.

take a map! or gps

The first time I took this trail, I took a bunch of guesses as to where to go. Some worked out some I had to back track. There was several new signs but they need more or bigger ones. Frame park has a beautiful formal garden( no bikes allowed in gardens) Saw several wedding parties taking pics.