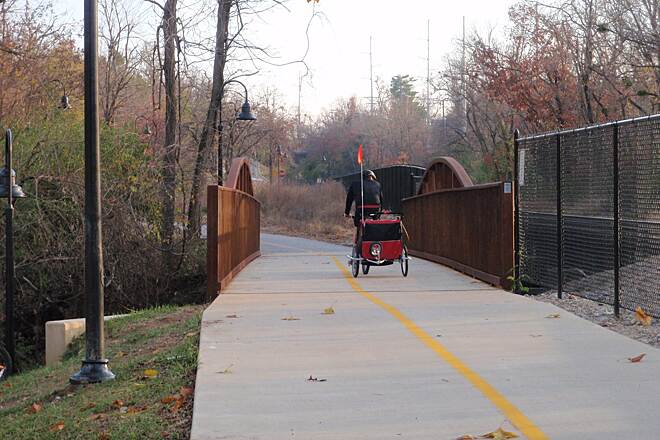 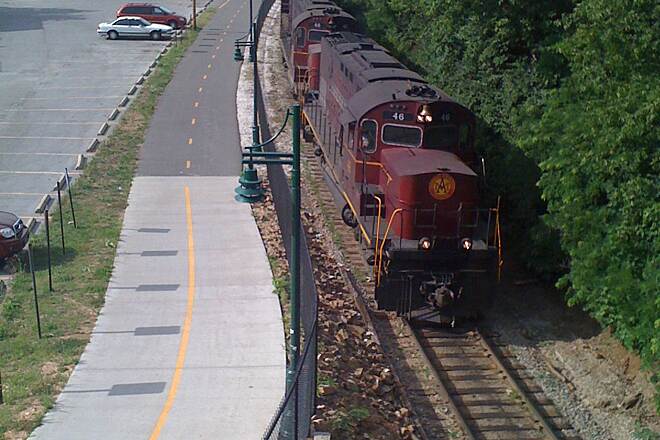 The tree-shaded trail parallels an active rail corridor for a portion of its route. In the early 2000s, the city of Fayetteville succeeded in negotiating for placement of a portion of the Frisco Trail immediately adjacent to the railroad corridor, which is used by the Arkansas & Missouri Railroad for both freight and excursion passenger trips. The trail now provides a safe alternative to accessing the city's entertainment district for those on bicycle or foot.

On its route from its southern terminus at the Town Branch Trail to its connection with the Scull Creek Trail at W. Prospect Street in the north, the Frisco Trail passes through Walker Park, under Martin Luther King Jr. Boulevard and through Frisco Park, an undeveloped section of woods. Night-time travelers need not worry, though—the trail is well-lit. This portion of trail follows an abandoned railroad bed that was originally built by the Pacific & Greater Eastern Railroad at the end of the 19th century. Later it was used by the Ozark & Cherokee Central during the early part of the 20th century before it was taken over by the St. Louis & San Francisco Railway, better known as the Frisco. The corridor was abandoned in the early 1980s but remained undeveloped until the city bought the right of way at the beginning of this century.

The trail provides a direct route through downtown Fayetteville that makes climbing the steep hills of the surrounding streets unnecessary. Benches are plentiful, and users will likewise appreciate the well-maintained asphalt and concrete surface.

Although a relatively short trail, the Frisco Trail provides a seamless connection with the Scull Creek Trail, Town Branch Trail, Tsa La Gi Trail, Walker Park Trail and Oak Ridge Trail. Many of these trails, including the Frisco Trail, are also components of a larger trail network known as the Razorback Regional Greenway, a 46-mile, primarily off-road, shared-use trail that extends from southeast Bella Vista to the southern edge of Fayetteville.

The Frisco Trail can be accessed at the intersection of W. Spring Street and N. West Avenue. Public parking is available at that intersection. The trail can also be accessed in the 500 block where it crosses Center Street, Prairie Street and Martin Luther King Boulevard. Ample parking is now available at the trail's newer southern end in Walker Park off Block Avenue.

Nice trail through the center of Fayetteville