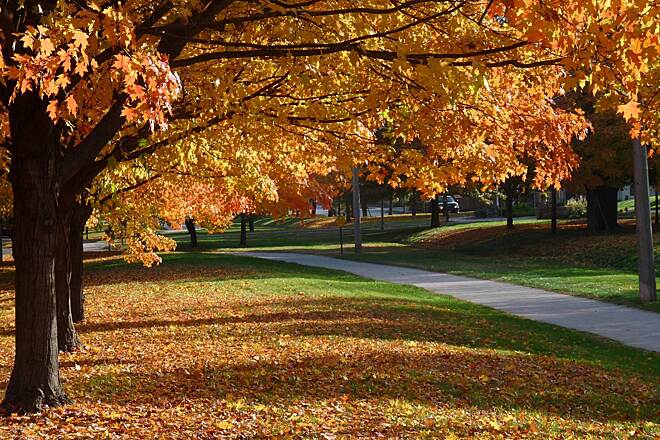 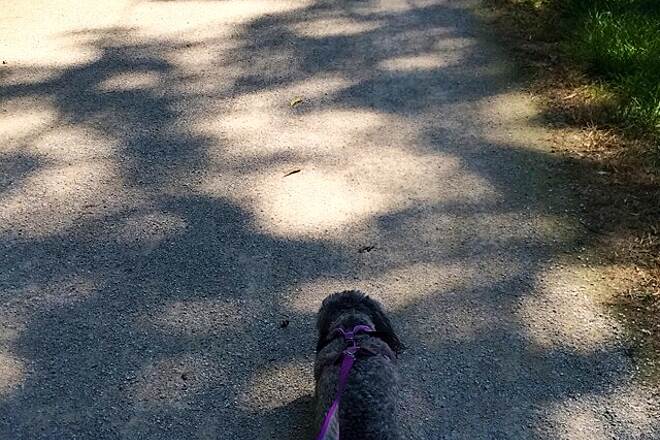 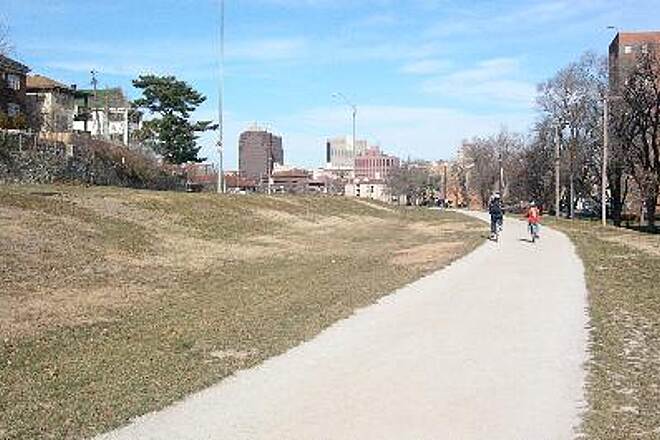 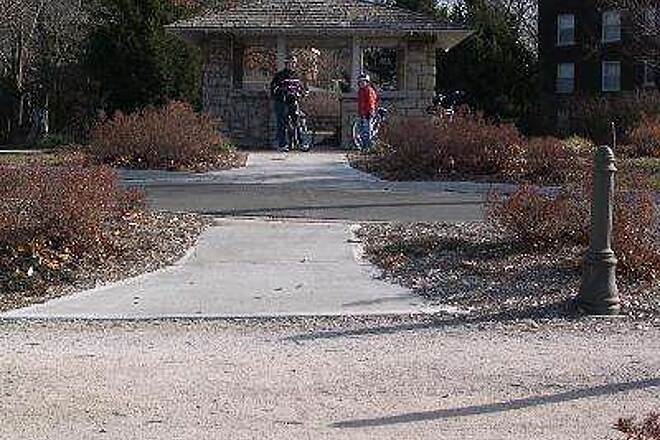 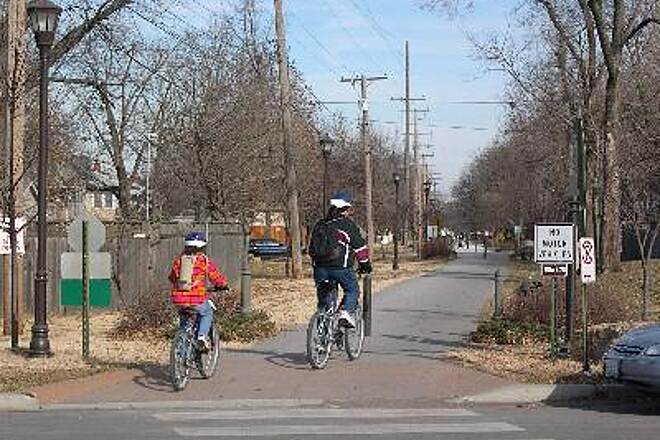 Note: A portion of the trail between Troost and Woodland Avenues has been closed since 2012 due to the presence of a small sinkhole. Trail users should take 85th Street as a detour. Refer to the Kansas City Area Transportation Authority's official website for more information and future updates.

The Harry Wiggins Trolley Track Trail, named for the departed state senator who persistently sponsored tax legislation for the Kansas City Area Transportation Authority (KCATA), is one of the most popular trails in Kansas City, Missouri. The trail runs on the former alignment of the city’s last streetcar—known as the Country Club route (or Club Line)—which ceased service in 1957.

A restored streetcar station reminds trail users of the right-of-way's past at E. 54th Street and Brookside Boulevard. The trail is located in one of the highest density residential areas of Kansas City and is adjacent to neighborhood commercial and activity centers along its entire length. City parks along the way partially punctuate the urban environment, helping lend a sense of seclusion and offering a place to rest.

The trail has night lighting in limited areas. While most of the route is surfaced with crushed limestone, the section south of E. 85th Street and certain areas prone to flooding are paved. In the north, the trail connects directly to the Brush Creek Trail, which extends east and west along the waterway.

Small parking areas for the Harry Wiggins Trolley Track Trail are located at the southeastern trailhead at E. 85th Street and Prospect Avenue; at the southern end of Woodland Avenue; and at the intersection of Main Street and Pico Street.

Farther north, park at the KCATA Park & Ride lot at W. Gregory Boulevard and Brookside Road or at the lot at Wornall Road and W. 74th Terrace.

This is a pretty good ride through some nice neighborhoods in Kansas City. Frequent traffic stops and moderate pedestrian activity make it somewhat tricky if you are looking to move quickly and without distraction, but still enjoyable overall.

Was hoping for more.

Stopping every block for traffic was frustrating along with the two block stretch through parking lots with no clear idea where the trail picked back up. Lot's of folks walking and could be a nice trail but a lot of the curbs have either sunk or the gravel leading to them has washed away. Very rough ride on a street bike. Drainage appears to be a significant issue though some of that is just due to saturation after a snow. Might try it again when it's dryer. Lots of Pokestops if you do that.

I have ridden this trail multiple times. The Northern end is quite busy, and there are several crossings throughout, so definitely a recreational trail. The further south you take the trail, the more quiet and remote the trail becomes. Trail crosses a few parking lots in Brookside and Waldo.

I have ridden this all the way to the end at 85th and Prospect, and then continued on to the Blue River Parkway. Will love it when this connects to the Blue River trails someday. The last mile of the trail is rough, overgrown and neglected.

A Decent Urban Trail with Many Road Crossings

I bike the Trolley Track Trail to get from the Country Club Plaza to Waldo frequently. The trail surface is similar to most rail-trails, and it can get quite crowded with walkers and joggers on nice evenings. There are also numerous road crossings, so it's difficult to keep up a decent pace. If you're in a hurry you're better off riding adjacent Brookside Boulevard. Overall this is a decent trail for commuting and leisurely weekend rides, but too short, with too many road crossings to make it any sort of destination.

It's Labor Day, so I was expecting quite a bit of traffic. I parked on the Plaza and rode around the Brush Creek Trail a little bit. There's a lot of interesting shops and restaurants on the plaza, so it would be a great place to end a ride for some shopping or fine dining. Some people have issues with riding in the street (maybe if you have small children?) but for me by and large that's common to see on the plaza and throughout the length of the trail. I rode south to Brookside. Similarly, there's so much to do in Brookside too. Plenty of places to stop and rest or shop. There's more street riding through there, but mostly parking lots (ironically they say no bike riding, probably for liability reasons but that didn't sway me - go slow and keep your eyes open and head moving). I continued south to Waldo which is my personal favorite area this trail comes to. There's a good sized bus hub if you had to pack up and ride back to the plaza or if you decided to bus in and then ride it's good both ways. There's countless places to grab a drink, although bike parking isn't a huge emphasis in the area, maybe just chain up to a pole or something. A great place to spend an evening before riding back. There is even a little family bike shop near there if you ran into some kind of snag. I continued south, but there isn't too much beyond that. I went across 85th street and for some reason there are barriers and signs posted that state the trail is closed - again I wasn't going to ride nearly six miles to not complete the whole trail, so I went around like everyone else apparently. There was no obvious indicator as to why it was posted as closed (no massive craters, huge tree limbs, or total degradation of the trail), but it was definitely less maintained with plenty of over growth, but still doable on a bike, maybe if you were on a little street bike in the rain it would be difficult, but on a nice sunny day on my mountain bike it wasn't anything worth mentioning. Unfortunately, this trail only leads to 85th and Prospect which was basically a seemingly deserted industrial part of town (at least on the holiday). There's not much worth seeing outside of a train track and a sign the states the trail ends (but the mileage numbering starts from this point).
I have read numerous reviews on here from people saying it's a walking path not a bike path, but that's just not the case. There was a fair number of walkers, joggers, bikers, children, pets, and all other kinds. I got no resistance or glares or anything. There are parts where you can't really get going too fast because of multiple stops for traffic or the like, but by and large it was fine.
It's relatively flat. It's a good trail. It's not really a destination trail, there's not much to see at the end, but on the way back you get to stop in Waldo, Brookside, and the Plaza again!
I completed the 6.25 miles, there and back, plus some of the Brush Creek Trail in about three hours without much breaking, but it could easily be turned into a day trip if you plan to stop for the evening in Waldo or ride around town a little more than I did.
Yeah, the path isn't in perfect shape (especially where it is labeled as closed), but it's not in any way damaged or unpleasant. It varies from fine gravel, to side walk to paved, just depends on where you are. I don't know why this trail got such bad reviews from others, I enjoyed it just fine.
The only thing keeping it from a 5 star rating would be going around the barricades because the trail is closed? and a some what rather uneventful ending.

I cannot agree enough with previous comments on this trail's real beneficiaries: walkers not cyclists. The Brookside area is a mess, walkers are not courteous, and there are far too many crossings to get to a reasonable speed. The trail itself is in poor shape, especially after any precipitation, when ruts have hardened and made it a particularly unpleasant riding experience. I frequently use Brookside just next to it, but am accosted to "use the trail!" when I do. The worst part is that as long as planners think that it is a legitimate bike path they will see no need to makea real one in the Brookside/UMKC area, which is particularly unfortunate because the Trolley Track is a nice hill-minimized route, avoiding the constant and unnecessary ups and downs of every other N/S route there.

A Great Path for Pedestrians, but not for Bicyclists

Always looking for a safe, bicycle-friendly place to ride together as a family, my wife, daughter and I found out about the Henry Wiggings trail from a friend, and we tried riding this trail from 75th street north to the UMKC campus area. As other reviewers have mentioned, the trail is likely wonderful for walkers, but it was very unpleasant as cyclists - several groups of people walking took up the entire breadth of the narrow trail, and it was uncomfortable how many of the walkers we passed (we were on bikes, after all) made it clear that they found bicycles on the trail annoying and a bother that they needed to move over to one side instead of walking down the middle or three or four abreast. The Brookside area was the most discouraging part; there was no clear, safe way for crossing through this area, especially Meyer and 63rd streets, and the need to stop for each cross street each block made this trail not nearly as relaxing or enjoyable as simply riding instead on residential streets for our return trip home. The trail is a beautiful concept; unfortunately, it simply doesn't work well for people riding a bike instead of walking.

Okay for walking, not a good bike trail

Wife and I just completed walking the whole trail. We started at the south end. It's okay for walking, but would be difficult for riding~ there are lots of street intersections and stop lights to interrupt a smooth ride.

There's a large cave-in right next to the trail on the south end, which did not quite gobble it up, but came right to the edge. The city has blocked the trail off at that point, and it has remained unfixed for at least four years. The trail has pretty much been abandoned from about the Troost bridge to the south end.

On the plus side, the north end goes through picturesque Brookside and Waldo. Plenty to look at and enjoy. Perfect for a leisurely evening stroll.

This trail is popular for walking through the neighborhoods, but not the best for cyclists looking for a long ride. It is often crowded with families with children, strollers, and street intersections every block make it difficult to maintain a steady pace. But it remains a good trail for a leisurely walk or short bike ride.

"The trail has now been extended to 6.5 miles. It's very popular with bikers, joggers, lots of families, even some bike commuters."