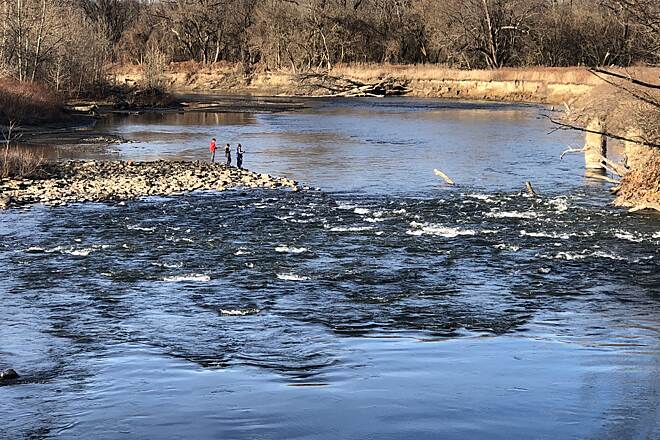 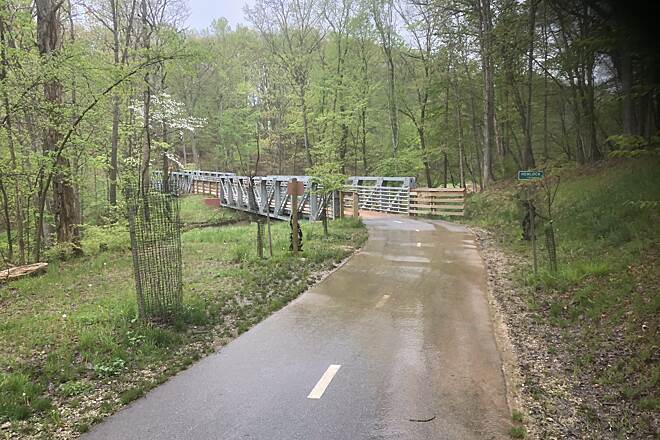 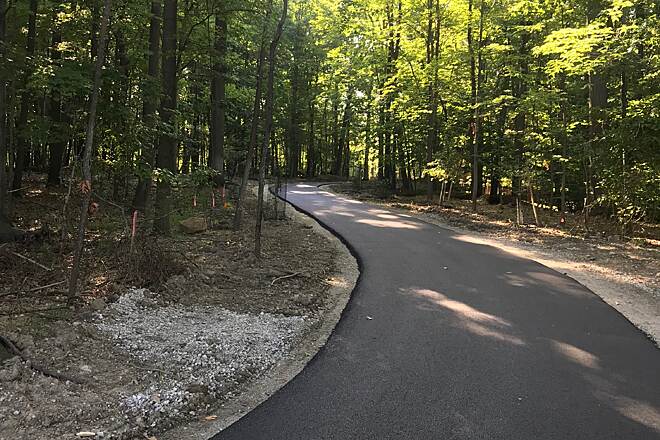 Decades in the making, at long last the Hemlock Creek Trail opened to the public in September 2019, giving residents of the Ohio community of Independence a convenient and scenic trail connection to the Ohio & Erie Canal Towpath Trail, which runs for over 80 miles through four counties. The Hemlock Creek Trail may not offer quite so much length, but it does provide a lovely paved pathway through the woods along the creek, just west of the snaking Cuyahoga River.

The trail's western end in Independence begins at the city's Elmwood Park, home to a sprawling recreation campus of sports fields, pools and playgrounds. A concrete sidepath runs out to Selig Boulevard, and heading east trail users will soon come to the start of the asphalt trail proper, on the campus of the Cleveland Clinic Business Operations Center.

The rest of the path abandons the suburban setting and fully immerses trail users in the forested expanse that surrounds the creek. The trail runs slightly downhill as it heads east toward the river, utilizing a series of bridges to cross over Hemlock Creek. Numerous benches line the route, giving ample opportunity for rest and relaxation; just after crossing the Cuyahoga River and around the two-mile mark, the trail comes to an end at a junction with the Towpath Trail in the village of Valley View.

The Hemlock Creek Trail is part of a planned trail network called the West Creek Greenway, which hopes to one day create a link between parks and communities in Parma Heights all the way to Valley View. The Hemlock Creek Trail is a lovely start, bringing together neighborhoods in Independence and Valley View and giving the communities a beautiful connection with the broader area trail network.

Parking and restrooms are available in Independence at Elmwood Park, located at 6200 Elmwood Avenue, and access is also available at the Cleveland Clinic Business Operations Center, at 6801 Brecksville Road. Please follow any posted parking signs and regulations.

Local buses also offer a convenient stop at Selig Boulevard and Brecksville Road, providing access to the western end of the trail.

I rode this trail on an exceptionally warm December day back in 2019 long before it was listed here on the TrailLink.com website. As stated in this website's trail description, this trail is at present, the most prominent piece of the planned 25 mile West Creek Greenway trail loop which will connect the Cleveland Metroparks West Creek Reservation in Parma and the Ohio & Erie Canal Towpath Trail in the Cuyahoga Valley National Park to the communities of Valley View, Independence, Seven Hills, Brooklyn Heights, and Cuyahoga Heights.

I parked and started at the Cleveland Clinic Business Operations Center off of Brecksville Road in Independence, Ohio. From here I headed east and downhill toward the Towpath Trail in Valley View. Unlike the trail description listed by TrailLink, I would not characterize the trail as running slightly downhill. You will drop 227 feet in elevation over the course of the first 1.5 miles, with 204 feet of that in a single half mile stretch. I mention this for two reasons. First, while many will find this type of drop exhilarating, it is unlikely that you will be able to completely cut loose as you will probably encounter quite a few pedestrians out using the trail just as I did. Secondly, since the West Creek Greenway loop is far from being completed, returning to your starting point will require that you climb back up out of the Cuyahoga Valley where the grade will reach 11% at points. Thus, in my opinion the trail is not for novice, or out-of-shape cyclists, or for young children on bikes.

When you head east out of Cleveland Clinic Business Operations parking lot, you enter wooded terrain that follows Hemlock Creek as it descends toward the Cuyahoga River. The trail surface is predominantly asphalt with concrete on many of the bridge surfaces. Since the trail opened in September 2019, the surface was smooth as glass when I rode in December of that year. The trail passes through the remnants of the millionaire William H. Hunt's estate, Terraced Lakes, which was created out of a historic mining landscape that created the foundation stones for many of Cleveland's first buildings. On your way you will cross over five bridges including a 200 foot span over the Cuyahoga before you reach the Towpath Trail at the eastern end of the trail. On the western end, the trail continues past the Cleveland Clinic Business Center and crosses over Brecksville Road, where it runs along Selig Boulevard passing Independence City Hall and then ends in Elmwood Park. In the future, this western end of the Hemlock Creek Trail will connect further westward toward the Seven Hills Recreation Center as some part of the West Creek Greenway.

This is a beautiful trail, and a great start to the larger West Creek Greenway. It's worthy of at least 4 stars but the climb out of the Cuyahoga Valley isn't a friendly one for everyone. Perhaps as this trail connects to future links in the West Creek Greenway then my rating of 3 stars will need to be re-evaluated.