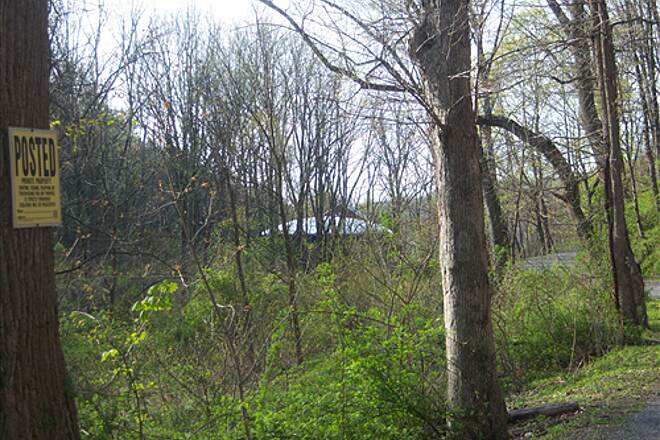 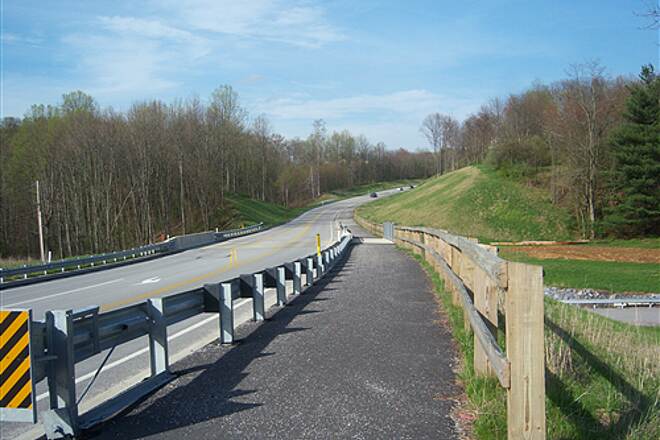 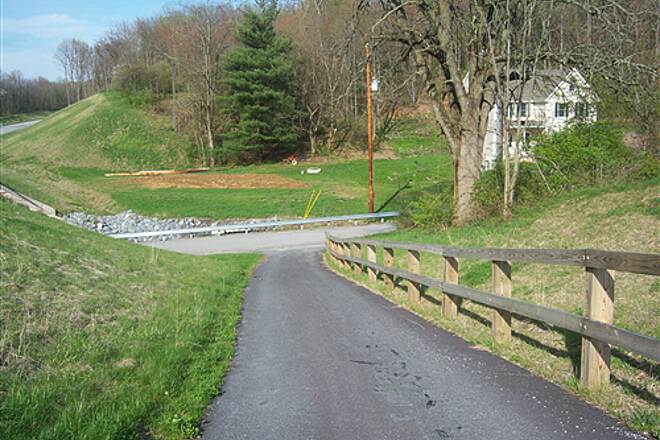 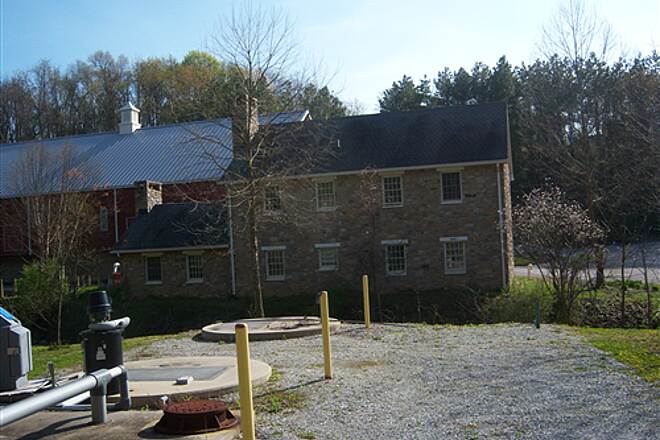 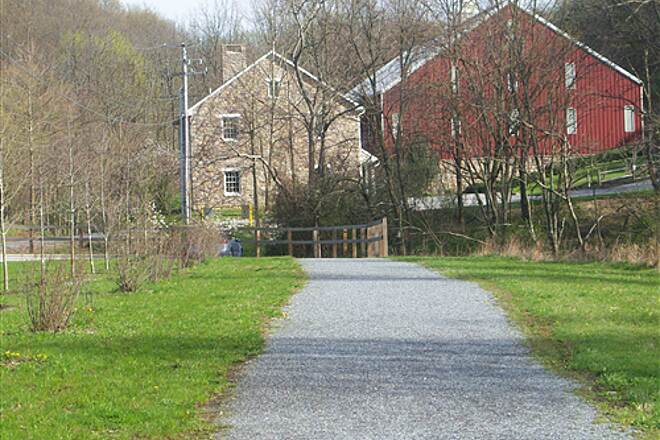 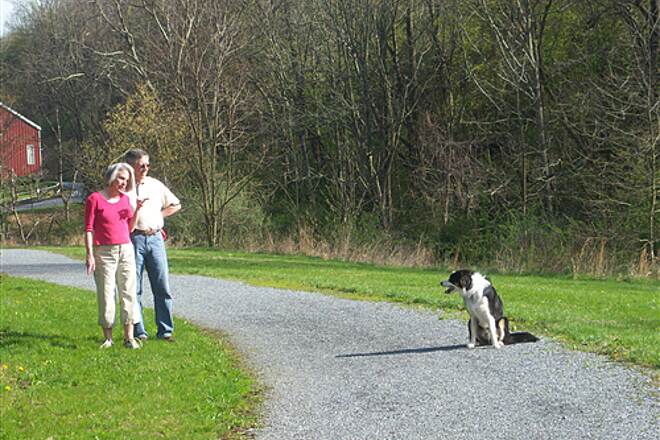 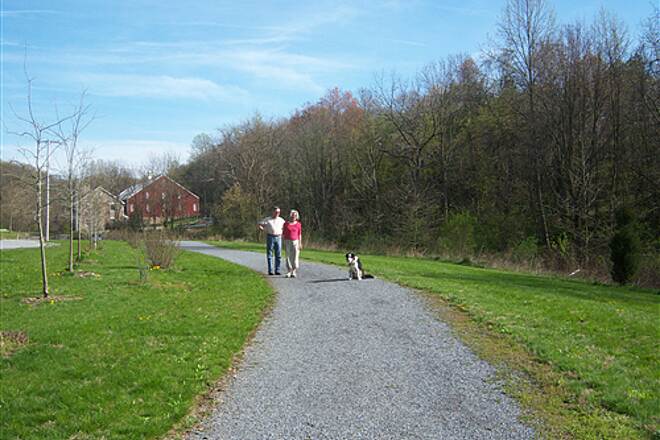 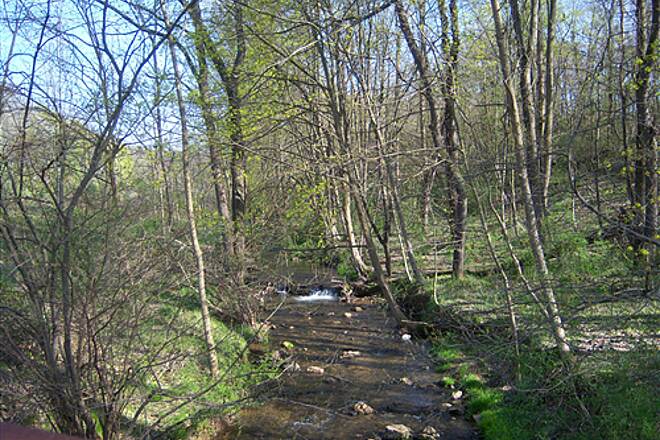 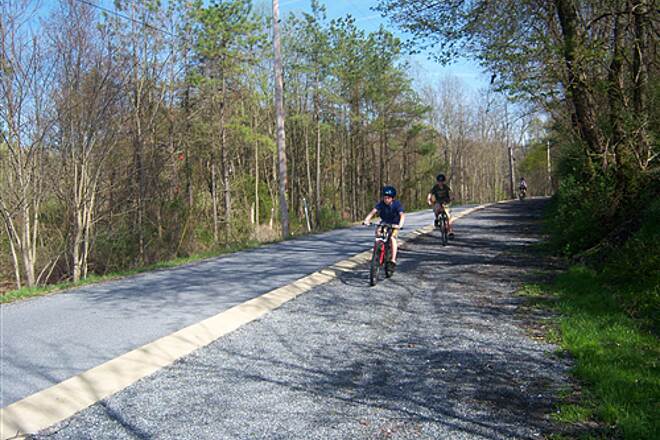 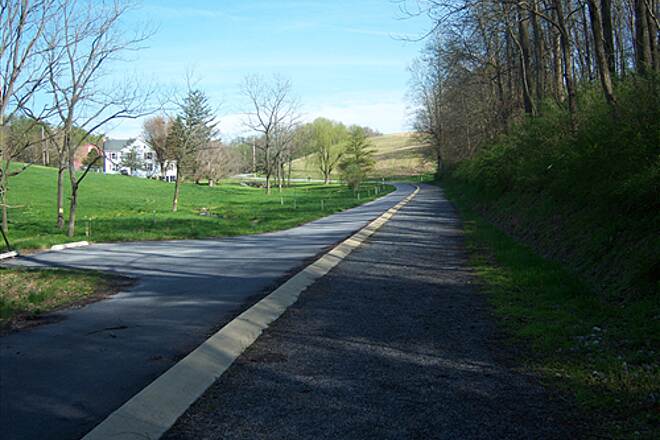 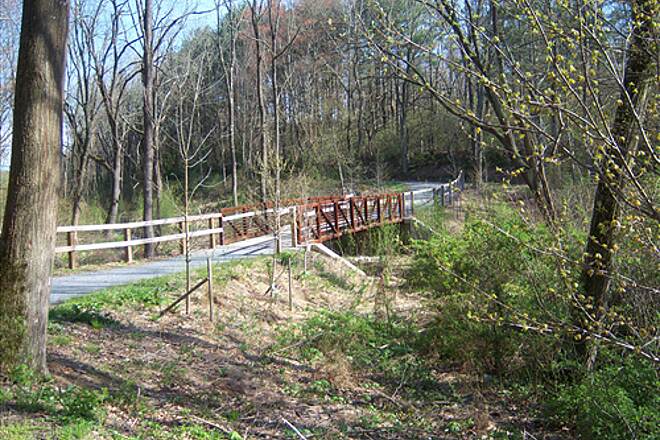 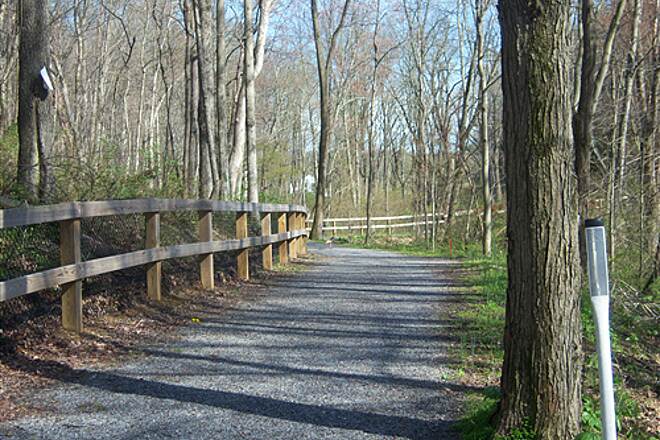 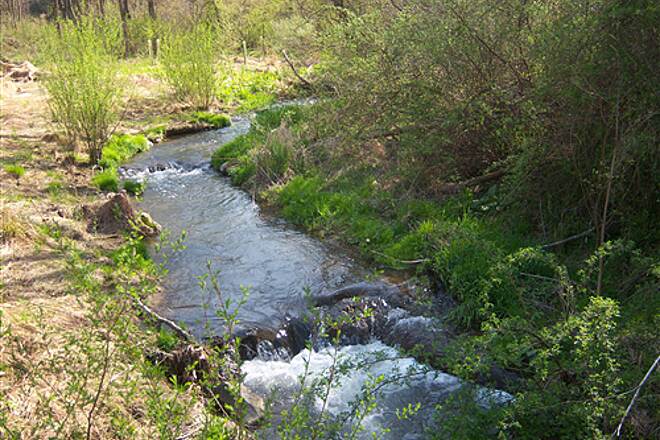 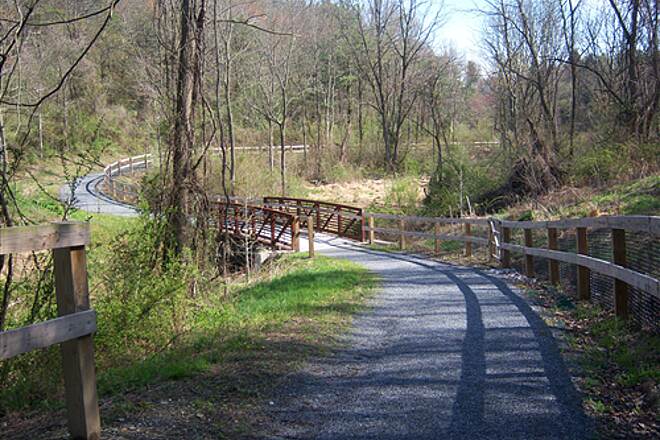 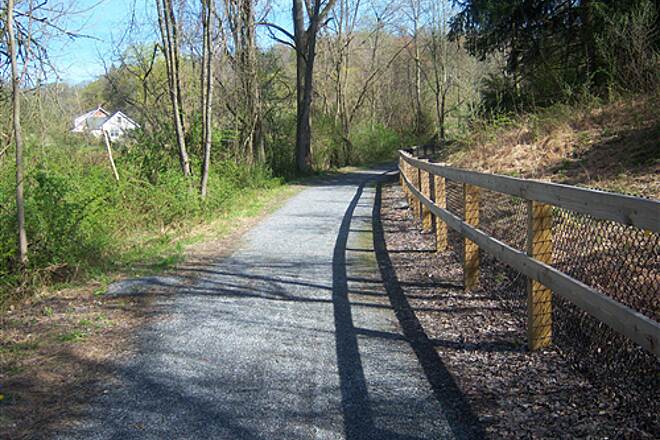 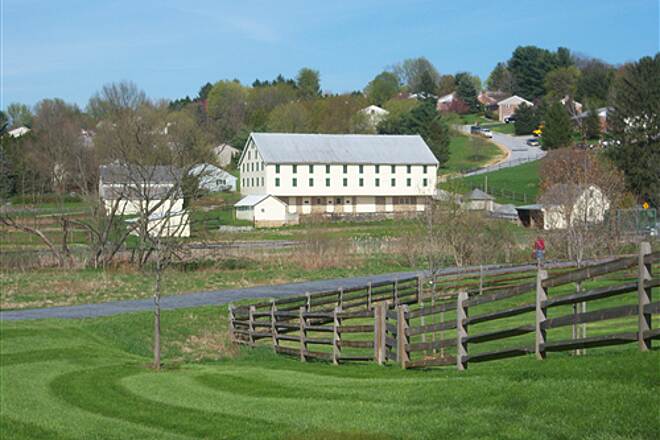 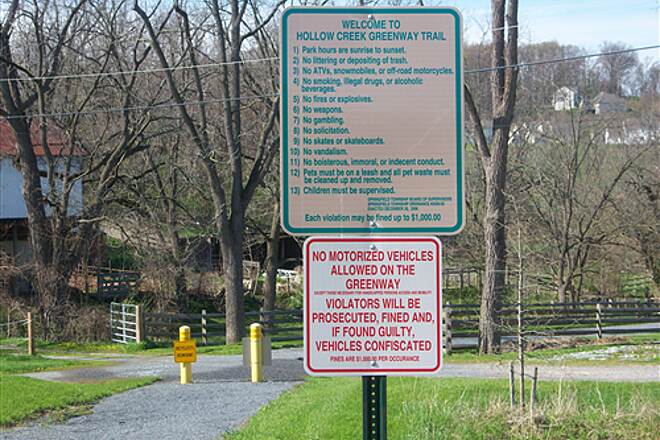 View Trail Map Send to App
The Hollow Creek Greenway follows its namesake waterway through scenic woodlands and valleys, offering a quiet oasis in the suburbs. The trail provides an important link between neighborhoods, schools and community parks from Springfield Township to Loganville Borough. Future plans include extending the greenway north to Richard Nixon Park and west to the Heritage Rail Trail County Park.

Parking is available at the northern trailhead off Valley Road.

The Hollow Creek is sure- a thing trail to walk, alone, or with a friend, kids, and a dog! My 2 dachshunds & I love the wide windy gravel path through wood with colorful trees, deer, streams, and flowers. The shade shelters us from light rain, winds, and hot sun. The trail is accessible from a variety of entry points because it intersects side roads connected to neighborhoods and the pathways of Dallastown Intermediate School.
Often I walk from the Valley road entrance to the end where it meets Susquehanna Trail, turn around, and walk back. My dogs love to stop at the creek and cool off, then we continue on. Often I see deer in the woods or up on the hill across from a farm. One time I saw a huge turtle hanging out and we were amazed.
Sometimes I make my walk longer by going to the connecting trail on Beck road. That trail passes a neighbor and connects to the Dallastown Intermediate School path around the school.
This trail is a great trail to take a friend who doesn't walk a lot because one can decide how long or short one wants to go. Please know the Valley Road entrance is about 2/10 of a mile from a beautiful nature walk that takes you to Richard Nixon Park.
On each walk, I finish feeling relaxed and happy. My dogs and I appreciate the wide trail especially when bikes or others need to pass around or opposite me.

Nice warm up before riding the York Heritage trail

Nice parking with porta-potty along Valley Rd., scenic trail climbs to most of the way, which means an easy return. Just a short drive to Seven Valleys and access to the York Heritage Trail.

A good workout and pretty

I started from the Trailhead off of Valley road. The trail commences going initially away from Valley road and turns sharply back and crosses over Valley road. After crossing over Valley road, one is immediately met with a short, steep incline. The trail levels off in places but is ascending most of its course. It also contains quite a few curves and with the course stone on many parts of the trail, it makes it challenging to make any speed on those section of the trail. There are a few places where the trail is surfaced with your standard crushed limestone found on many rail trails throughout the country. One will travel over three bridges while traversing the trail. The scenery makes the trail worth the workout. The trail "appears" to terminate at water street just west of the Reynolds Mill Road over pass bridge. There is no signage indicating that the trail terminates or that one is even on the Hollow Creek Greenway. If one continues eastward; i.e. make a right on to the street where the bike trail ends and you ride underneath the overpass bridge, you will come to a very steep gravel path up to the above road - Reynolds Mill. One can then continue north, up hill on Reynolds Mill road on the designated, crushed limestone path where it terminates at the intersection of Reynolds Mill Rd and The Susquehanna Trail Blvd.

The trail is very nice and calm but very short. You also cannot go off the trail because all areas surrounding it is private property. I suggest it for a small trip when you don't have a lot of time.

From the nature center in Richard Nixon Park I followed the stream until the edge of the county park. I backtracked a few hundred feet and took the trail up the hill. It climbs steadily for half a mile and then circles back to the nature center

This trail is a hidden wonder, that most people do not even realize it exists.

It parallels the Hollow Creek which is small and peaceful. The trial is close to Nixon Park and just a few miles East of the Heritage Rail Trail.(The Rail Trail is longer and attracts more users.)

Unlike the Heritage Rail Trial which is quite level, the Hollow Creek Greenway is a good mix of grades which can make it fun for someone looking for a slightly more challenging (intermediate)walk or bike ride.

Overall, this is a great little trail well worth discovering if your in the area.

Constructed in 2008, the Hollow Creek Greenway is a splendid, 1.7-mile, multi-use trail that winds through a secluded valley directly west of the boroughs of Jacobus and Loganville in central York County. Like the nearby York County Heritage Rail Trail, which it may some day connect to, the Hollow Creek Greenway takes users past lush woodlands, picturesque creeks and ponds and rural farmhouses. Although the greenway itself has a crushed stone surface, two paved trails; one that connects to the Dallastown Area Intrermediate School and Jacobus Community Park, and a second that extends east along Route 214 to the Susquehanna Trail and the north end of Loganville, have already been constructed. The York County Parks and Recreation Department, which recently bought the former horse rescue grounds near the greenway's northern terminus, will permit its extension into Nixon Park, while Springfield Township officials have ambitious plans to construct future extensions through the area, connecting to the trail networks in nearby William H. Kaine and Spring Valley county parks. The only caveats are that the greenway's southern terminus, off Water Street on the north end of Jacobus, is rather unremarkable, and there are no signs informing users about the ramp connecting to the Route 214 extension on the other side of the underpass. This is in marked contrast to the greenway's northern terminus, which features a well-defined trailhead with ample parking off Valley Road. The extension to Jacobus Community Park and the Intermediate School is also unsigned,