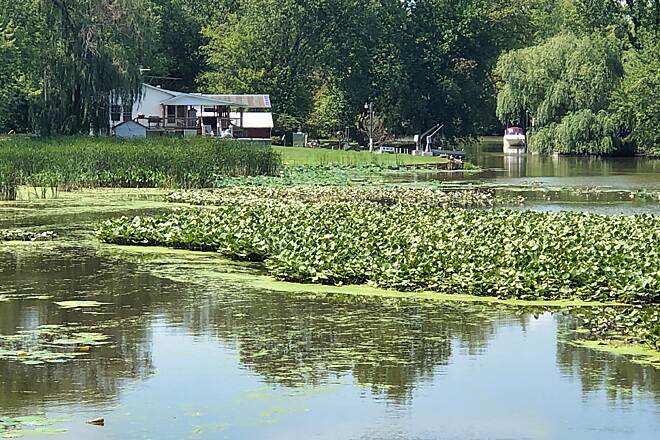 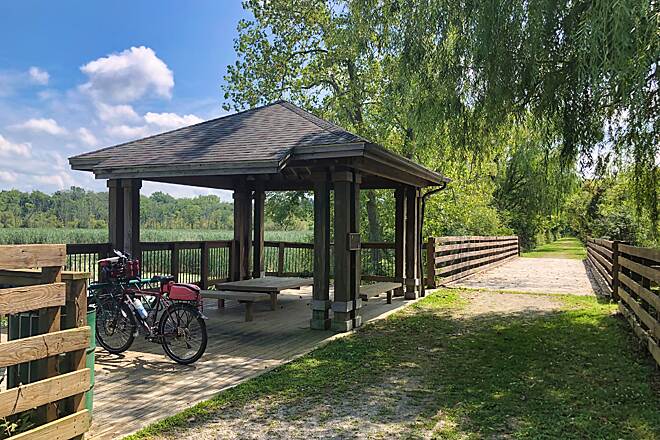 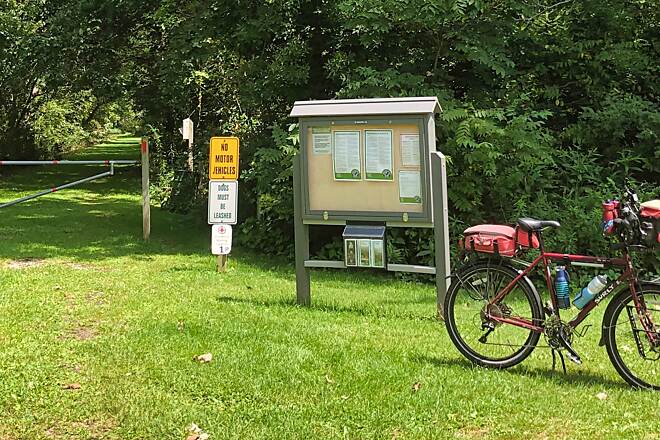 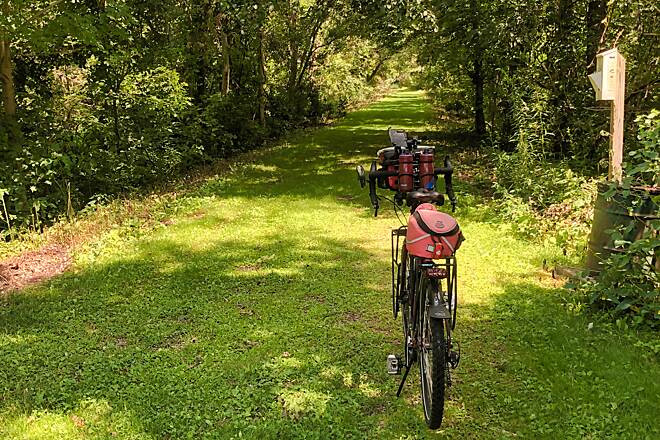 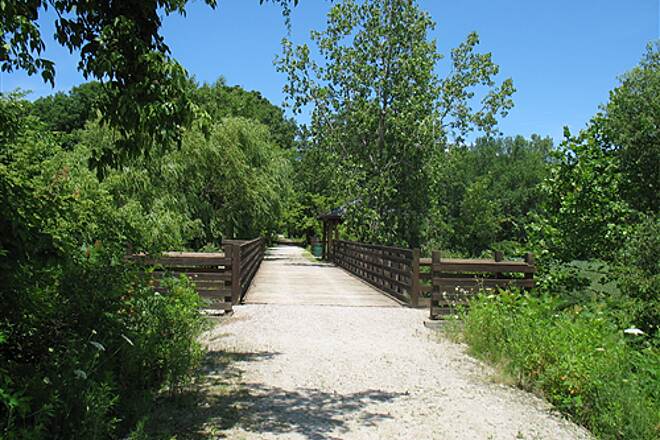 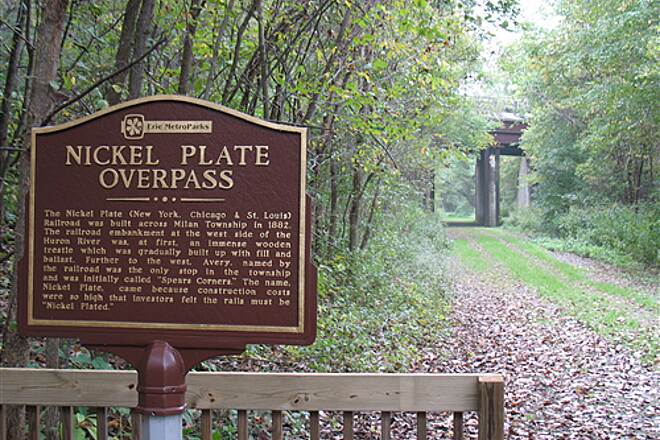 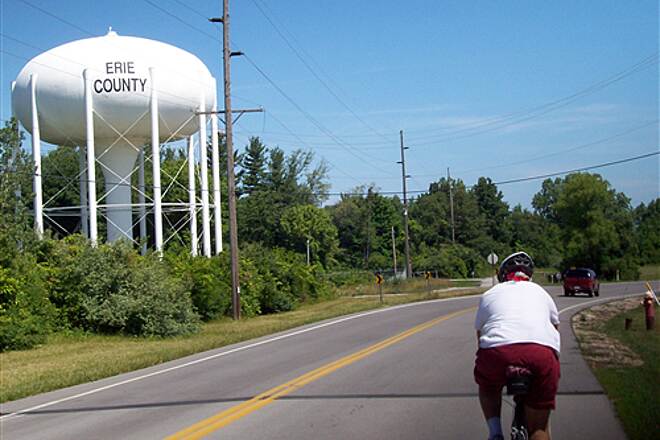 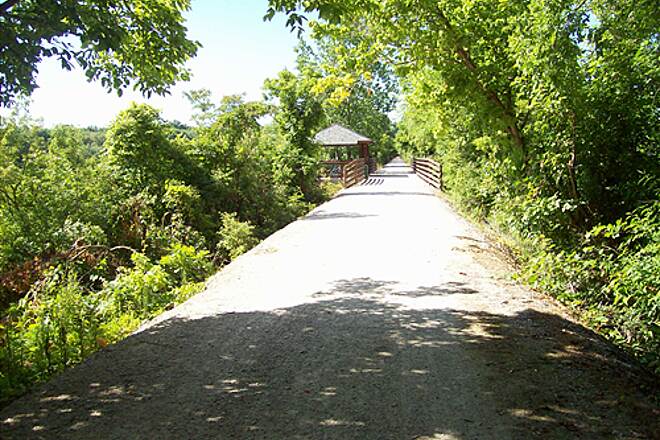 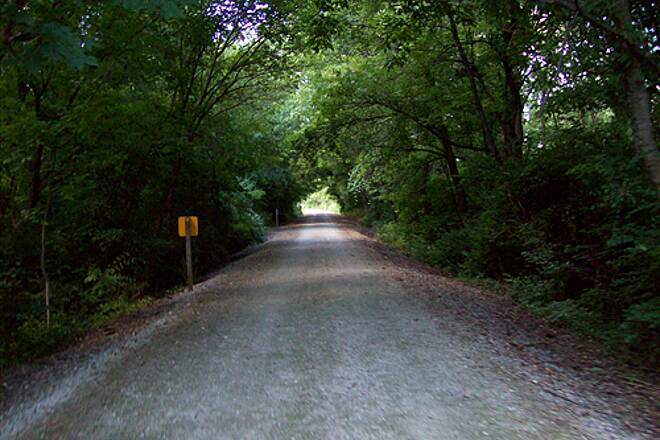 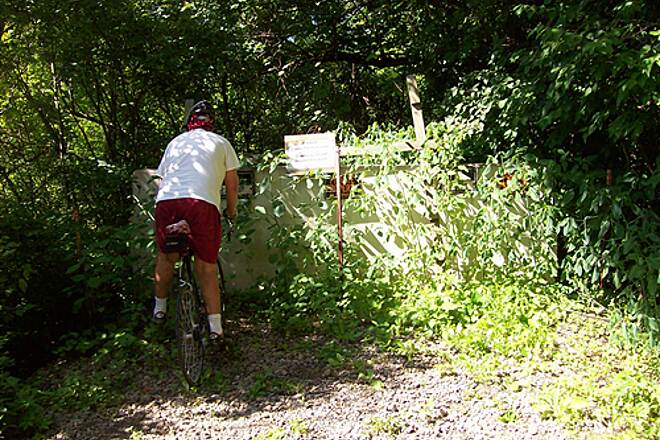 The Huron River Greenway MetroPark Trail has two separate segments, each just under 1 mile long. The northern (Huron) segment runs from DuPont Marsh State Nature Preserve off River Road and heads south about 0.9 mile, ending at a gate on River View Drive in Franklin Flats. The other side of the gate is private property, so do not trespass.

The southern (Milan) segment runs from the end of N. Main Street and heads north 0.9 mile to end at a barricade across the trail. Again, the other side of the barricade marks private property.

Start point location does not look promising but whole family (and dog) enjoyed it VERY much. Wide, flat, manicured grass path that sits above ground level on both sides. Large bends make the walk interesting with the first 0.5 mi as the most scenic part. The latter 0.5 mi is swampy/marshy on one side and woods (mostly) /river on the other.

A Trail on Hold

I rode what I will call the northern and southern sections of the trail. On the northern segment the trail runs from the Erie County water tower to River View Drive. The southern segment runs for about a mile along the old Wheeling & Lake Erie rail corridor from North Main Street in Milan, Ohio. So, the lawsuit mentioned in other reviews here must have been favorable to the abutting landowners as the trail certainly does not cover the same distances as mentioned in zars 2010 review.

The northern section has a grass surface that covers a solid crushed gravel under layer. The DuPont Marsh is pretty with many types of aquatic birds to be seen. Where the trail ends you get a good opportunity to see the Huron River. The southern section is very similar to the northern section of the trail in that it has a grass surface covering a crushed gravel under layer. However, the surface is softer than what you find in the northern portion of the trail and probably difficult to ride after a prolonged rain. Definitely, not a trail for skinny tired street bikes.

At this point the Huron River Greenway is probably best left to the local communities as the grass surface and several mile gap between segments do not make it attractive to people looking for new trails to ride. Until local property owners decide to reopen their portions of the rail corridor to the public I would imagine that improvements to the trail surface and additional amenities probably are not in the picture for Erie MetroParks. There are a few pretty sights on these two trail segments but until they are connected to each other or to some other nearby trail I would not go out of my way to ride this trail.

The Huron River Greenway MetroPark trail has been re-opened to the public
to the extent it was before being closed in 2007 as a result of a court decision.

It is open from the trailhead they share with another Erie MetroParks facility,
the DuPont Marsh State Nature Preseve south to about 1/2 mile south of the
"Nickel Plate Underpass." The current entrance is near a large Erie County
water tower on River Road south of Huron. It is also open from the foot
of Main Street in the Village of Milan north to near the Ohio Turnpike bridge
over the former railroad and the Huron River. Users on this portion of the trail
should park on the left side of the trail entrance, near the Greenway sign, or up
in the Milan Town Square and walk or ride down the hill. Only about a 700
foot long section between the NKP underpass and the Ohio Turnpike bridge
remains closed.

While the bridge for U.S. 250/State Routes 13 & 113 over the former railroad
track in Milan was removed, a box culvert was installed in its place on the
former railroad right of way. While this has precluded the railroad line from
being re-laid; it does mean the trail could eventually be extended south to
Norwalk along the former Wheeling & Lake Erie line. There, it would connect to
the North Coast Inland Trail, another rail trail open west of Norwalk on the
former NYC Norwalk Branch.

"The prior review by Mr. Gary Steiner that states the Huron River Greenway is closed is FALSE. The trail was not, and IS NOT closed.

While it is true the ""Nottke"" decision was overturned on appeal and another appeal by Erie MetroParks to the Ohio Supreme Court was turned down; the only thing the opposition won was another day in court. It did not close the trail.

Mr Steiner is an abutting property owner and a litigant against Erie MetroParks. If you have any questions or need more information; please contact Erie MetroParks directly, or visit their web site at www.eriemetroparks.org."

The decision on the Nottke Case was reversed on appeal last year (2004)and park is closed by agreement of land owners and park system until the Courts can finish their work. An appeal by the metroparks to the Ohio Supreme Court was refused last month.submited 8/6/05