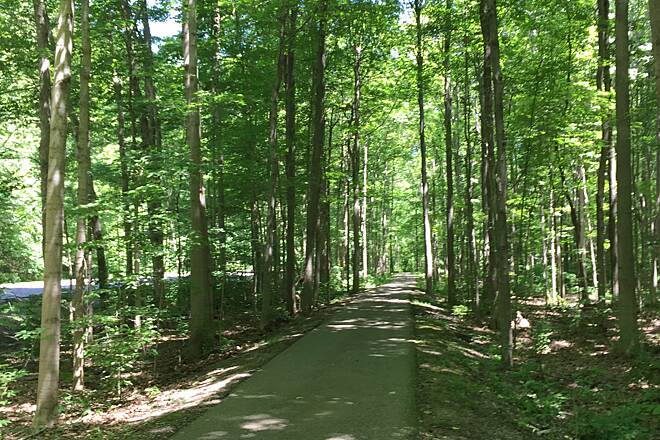 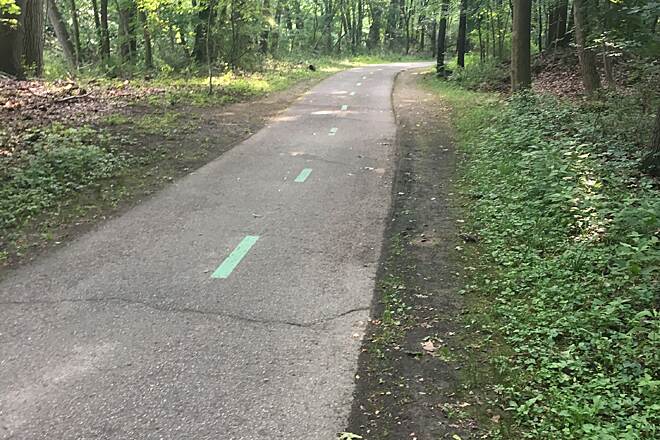 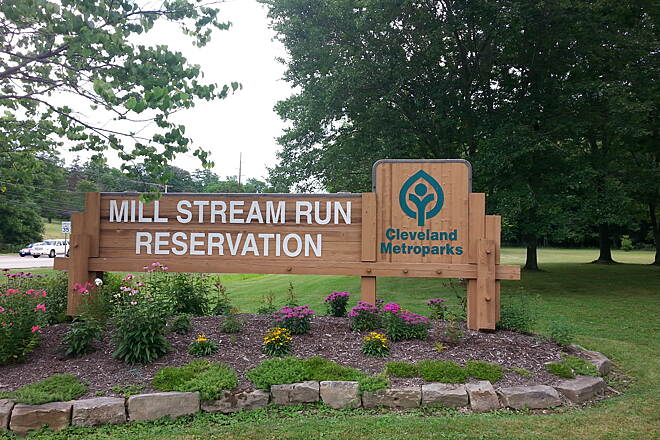 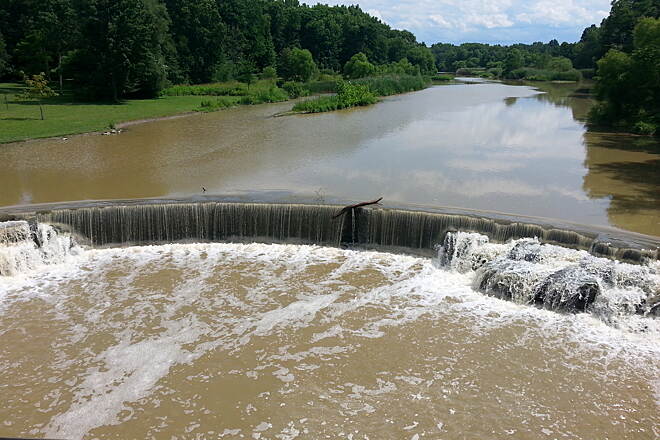 For nearly 9 miles, the Mill Stream Run Reservation All Purpose Trail runs through a wooded park in Berea, a western suburb of Cleveland. Though the trail loosely parallels Valley Parkway, you will feel removed from an urban setting. Along the way, you will find a wildlife area, several picnic areas, an archery range, and several connecting nature trails, including an equestrian trail.

At its northern end, you can easily pick up another paved trail on the north side of Bagley Road, which continues nearly 14 miles northward through the Rocky River Reservation.

Parking is available at the trail's southern end at Edgerton Road, and on its northern end near the intersection of W. Bagley Road and Valley Parkway. Additional parking spots, as well as restrooms, are available along the trail throughout Mill Stream Run Reservation.

I ride this trail frequently. It is very well maintained with a super smooth asphalt surface. Depending on the day and weather there can be other walkers, runners or roller bladers but I rarely find it problematic. You can extend the trip all the way up to Lake Erie which is an awesome way to spend a day. This is an amazing, safe ride that is a must-do. I love it.

I’m out for the ride and beauty this trail was breathtaking in a lot of areas … people seemed very pleasant and it was easy to ride … what was a small drawback for me was you do ride gently down hill and it’s is more uphill coming back.

Typical for a Cleveland Metropark

I rode this trail in early June of 2017. This trail is approximately 9 miles long. I started at a parking lot just west of Edgerton Road and rode out to Edgerton and then northwest back through this Cleveland Metropark until it crosses Bagley Road where it continues on in the Rocky River Reservation. As mentioned by other reviewers this trail follows the main road through the park — the Valley Parkway. There were many bikers and pedestrians using the trail so at times maintaining a decent speed was difficult. I could see and understand why many cyclists prefer to ride on the road. I enjoyed the shade the trees along the trail provided, although on the return trip, the position of the sun was such that there was not as much sun protection. This trail follows the Rocky River as it heads north toward Lake Erie, though you don't see much of the river on this trail. Starting where I did, you are descending most of the way, and climbing on your return. For the most part the slope is very gradual with just a few short steep climbs on the return trip.

The above review nailed it. Not great for cycling.

I wanted to at least try this trail as it's one of the only longer trails nearby I haven't done. As AJW said, it very often clings along a road way most of the time. Very little as far as scenery, and lot's of spurs. The constant sound and sight of traffic isn't a pleasant "getaway" atmosphere. My visit was on a busy day during peak hours and it was quite busy. I'd imagine it still being quite populated during non peak hours as well. It serves as an artery for commuters as well. If I lived very near to the trail, I'm sure I'd ride it plenty. Though it's not a great cycling trail to go too far out of your way for compared to other nearby trails like the Summit Co Bike and Hike, or Canal Towpath for example. There's also many busy road intersections. Several of which you need to wait for a cross-walk light. Now onto the better aspects. It's of decent length. It connects to the Rock River trail, or vice versa, to extend outings. Also a spur heading to Parma Heights as well. With many picnic areas, it's good for a family outing that would include a lunch break. It's paving is above average with middle line markings. It's mostly flat with just some slight minor hills. There's quite a few non blind curves which are fun to navigate. Also some blind curves to watch out for. The trail is well kept. I saw plenty of dog walkers, and not one abandoned pile of poo. Overall, I don't see myself going out of my way for this trail again.

The trail runs through a park with lots of picnic areas. It is paved, mostly flat, and a mix of shade and open areas. There is a river nearby, but you only see it at a couple spots. It is a good multipurpose park trail for locals, but it is not a destination for trail cyclists because it runs right along Valley Parkway most of the way. So you will have cars next to you. Also, you will need a trail map or GPS because there are several side trails and spurs that can lead you astray.