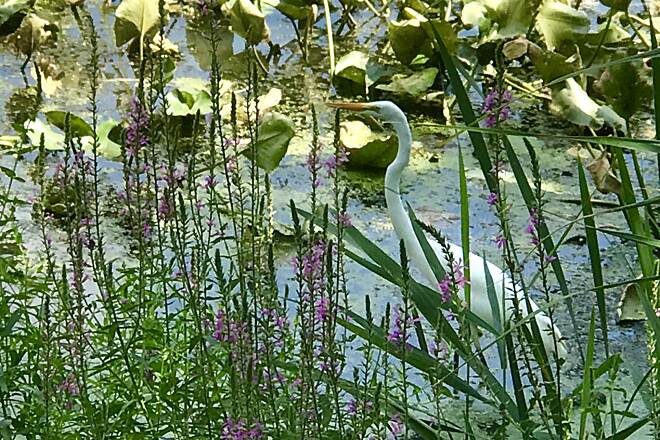 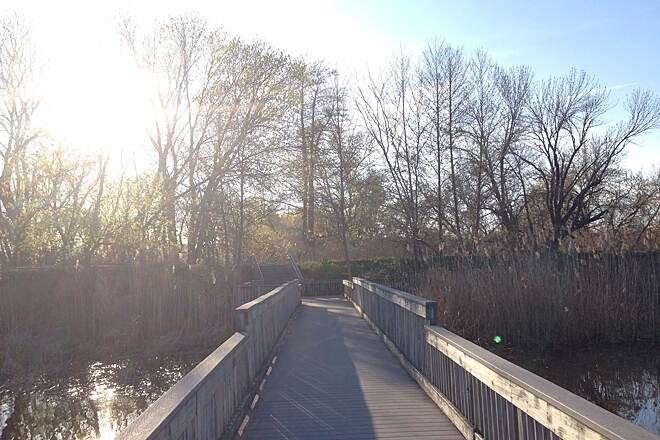 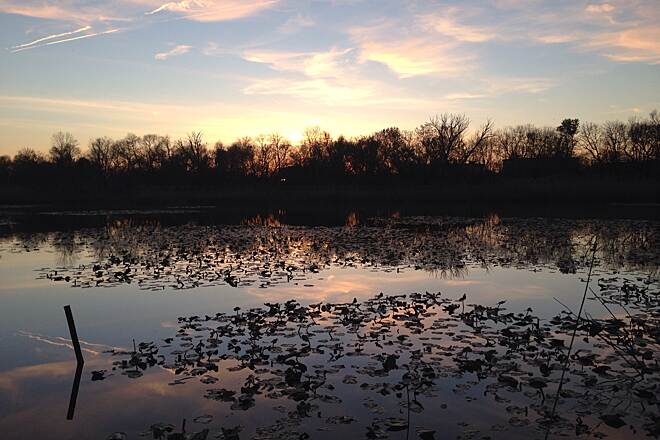 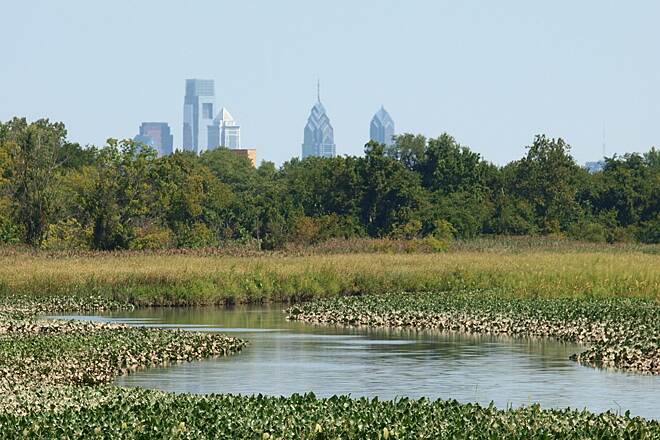 The John Heinz Refuge Trail and various footpaths at John Heinz National Wildlife Refuge at Tinicum stand in stark contrast to the urban setting that surrounds this refuge. At different points on this flat and hard-packed trail, you have views of the Philadelphia skyline, while your immediate surroundings encompass 1,000 acres of water, marsh grasses, and trees.

Expect to see lots of migratory birds here as this freshwater tidal marsh—the largest in Pennsylvania—is a resting and feeding spot for some 300 species of birds, as well as 80 nesting species. Deer, coyotes, raccoons, beavers, and otters are among the mammals that also make their home here, along with many fish and reptiles.

The marshland at the southwest corner of Philadelphia became the first urban refuge in 1972 after local citizens protested the proposed routing of I-95 through the area. Later, the refuge was named after late U.S. Senator John Heinz to honor his commitment to preserving the refuge. The refuge trail is part of the Circuit Trails, a developing 800-mile urban network of trails in Greater Philadelphia, of which about 350 miles are currently complete. It’s also on the East Coast Greenway that will eventually extend 3,000 miles from Maine to Florida.

The refuge is open sunrise–sunset; check the exact times for the season at the entrance gates. Bicycles are allowed only on designated service roads in the refuge. All visitors must remain on the trails, which comprise service roads and footpaths. While the refuge has an estimated 10 miles of trails and footpaths, about 9.4 miles are multiuse or maintained for hikers. Pets are allowed, but must be on a leash and must stay out of the water. Fishing is allowed with a Pennsylvania fishing license.

You can reach the refuge by bicycle on the Circuit Trails; by public transportation on bus line 37, 108, or 115; or by car. Starting at the main parking lot off Lindbergh Boulevard in southwestern Philadelphia, you’ll find the Cusano Environmental Education Center, where you can learn more about the refuge or take hikes led by volunteer naturalists. You’ll also find maps displaying the trails and footpaths, as well as wildlife observation areas and fishing platforms.

The main trail forms a figure eight along the shoreline of the impoundment lake and along Darby Creek, which flows into the Delaware River. Footpaths intersect along the way. Taking the right fork after leaving the parking lot (counterclockwise around the lake), you’ll encounter a boardwalk at 0.2 mile that crosses the lake. In 0.5 mile past the boardwalk, you’ll come to a two-story wildlife observation platform on the shoreline.

The southern side of the figure eight’s lower lobe passes alongside I-95 in the vicinity of the Philadelphia International Airport. At the extreme western end, a section of trail dead-ends at the point of a jetty beyond State Route 420/Wanamaker Avenue.

To reach the western trailhead from I-95, take Exit 9B toward SR 420 N. Go about 0.1 mile north on SR 420 N/Wanamaker Ave., and look for parking on either side of Wanamaker Ave.

mixed review, depending on which section

The John Heinz at Tinicum is excellent at the northern end, around the lake and back. Beautiful with abundant wildlife, especially birds. I haven’t seen the middle section because I can’t walk that far. But, parking at the southern end and walking northeast was horrible and I’ll never do that again. It is too close to the road and the noise from interstate 95 was so loud we couldn’t converse. We tried to come back a different way, but because of the rains and lack of bridges, or even boards, we were in water up to our knees.

A really nice retreat from the city. Tons of different birds, turtles, critters! The path is mostly smooth and wide but definitely would be better on a mountain bike. Pretty quiet

Fun trail but not too long.

This was a pretty nice trail. It is better for a mountain bike rather than a road bike. Most of it is either dirt or gravel.

Working at the airport and looking for a fun, easy run close by to suit my limited ability !! I ran around Derby lake which was about a 5k distance on double track trail. Trail was wide with no elevation, a little muddy after the rain but easily run able. Parking was easy, facilities were clean, run was fun. I will be back next time I’m in town !!

I took my bike (with mountain bike tires on it) and rode the loop. The path is wide and pretty smooth so you don't really need the mountain bike tires. Beautiful day, beautiful place, not overrun with too many people to make it difficult to ride without constantly stopping (wide paths help). The earlier you go, the more birds and wildlife you'll see. It's about a 45 minute ride up I-95 and worth it. Fish, boat, walk or ride, you'll enjoy your time here.

My 10 and 7 year olds had no problems keeping up. Great trails for little legs. So much to see here. They loved stopping along the way to read the signs and taking a look at the visitor center.

2 places to enter this trail. you will most likely see other bikers and hikers. multiple places/trails to explore. all flat no mountains to deal with. some of the off trails can be rough but that's the way i like it.