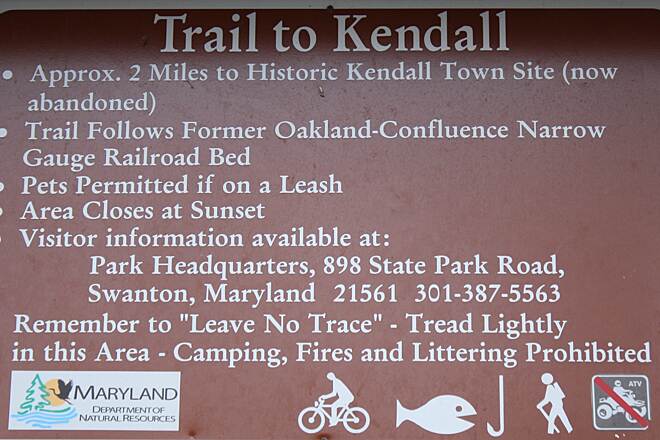 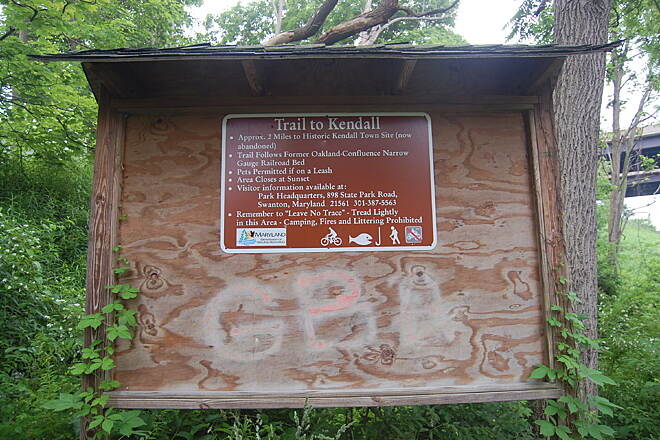 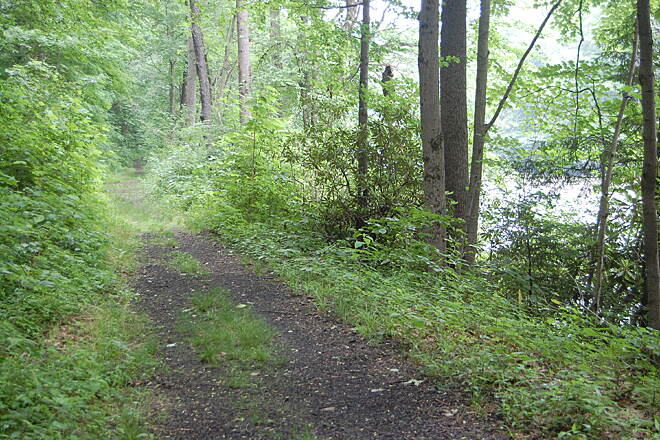 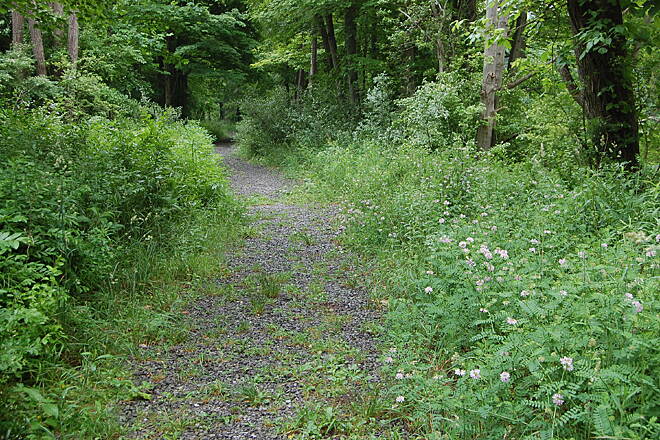 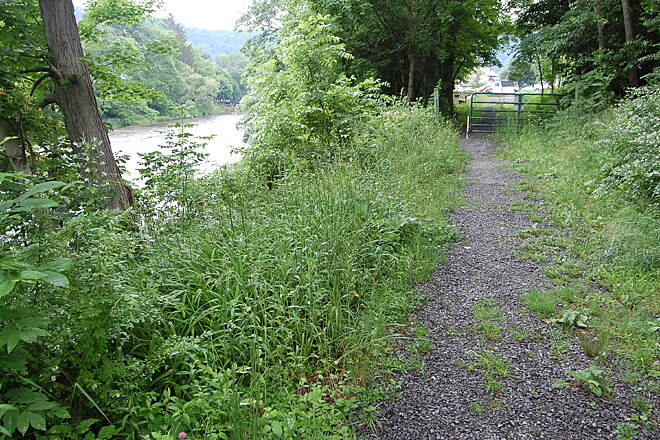 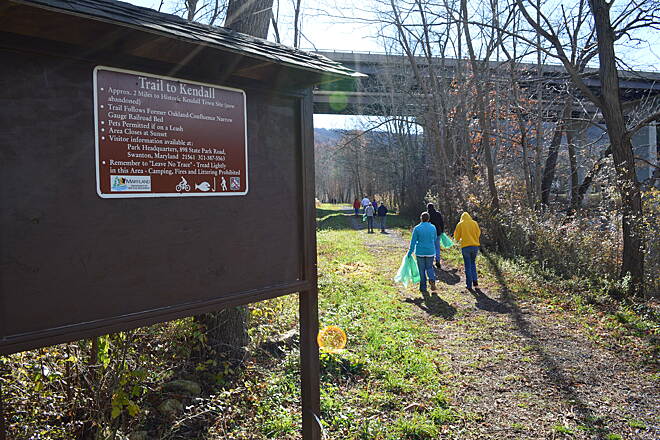 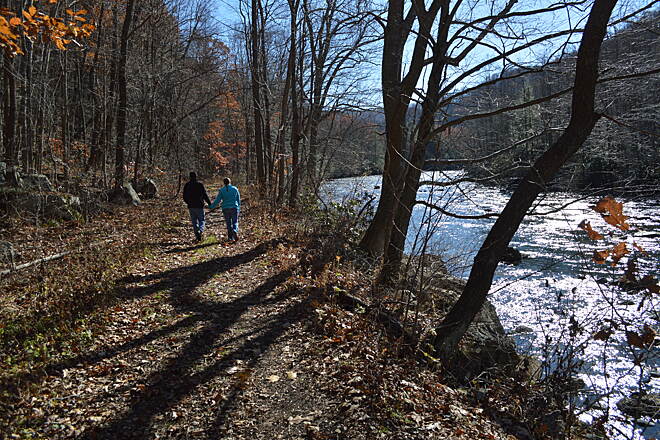 The little-known Kendall Trail extends 2 miles south from the tiny community of Friendsville, Maryland, to the ruins of the former logging town of Kendall. The trail offers expansive views of the Youghiogheny River, which it parallels for most of its winding route. Engulfed in dense woodlands, the shady trail occupies an abandoned narrow gauge railroad corridor.

The trail is supported by the Friendsville Trails Alliance, whose members regularly support and maintain the local gem.

This trail is actually 5.5 miles long. Even the sign in Friendsville only shows the roughly 2 miles that take you to Kendall. But the trail continues on past there, although it becomes increasingly rugged as you go.

From a back story standpoint, Kendall was founded in 1889, as a lumber town, and abandoned circa the 1920s. The railroad was removed circa the 1940s. This means that there are few remains, and that the trail bed is rougher than rail trails built on more recently inactive railroads.

With that in mind, I recommend a mountain bike with suspension, although a hybrid will do if that's what you have and you are used to rough trails. There are far too many rocks for a road bike to traverse this trail. Also note that eventually, you'll have to hike if you want to reach the end of the trail; bring good shoes as there is mud (even though it hasn't rained lately).

The first 0.4 miles are gravel from the parking area by the trailhead (east of the river on Morris Avenue, as indicated on TrailLink; there's also parking and a port-a-john at the parking area west of the river off of Church Lane, which is what the signs from Maple Street off of I-68 will point you to). After this section, it becomes a forest trail, dirt-and-leaves with rocks, sometimes rocks obscured by leaves. The number of rocks tends to increase the farther you go.

Kendall is around mile 2. I've seen some reviews on the Internet that say there isn't anything there. That isn't really true. If you're expecting buildings, this isn't the ghost town for you. But I saw a couple stone foundations that were clearly built by humans, some pieces of lumber that were machine-cut, and a heavily rusted-through iron bucket that had seen better decades. Note that if you decide to explore the Kendall area off the trail, make sure you have a GPS device that marks where you've been - the woods are thick there.

Still, it's fair to say that your primary motivation for this trail should be the rugged scenery and the challenge, not expecting to see a town at Kendall. I suggest Kaymoor, West Virginia if you're looking for a ghost town trail, though that one is hiking, not biking.

Around mile 2.1, just past Kendall, you'll hit the first major (but short) mud section. In a lot of the mud sections, if you have decent speed, you can cross them by bike and keep your shoes dry. If you don't have decent speed (and you won't always), the mud might try to swallow your bike, so navigate by foot as needed.

Just before mile 2.2, there's a downed tree, with two main branch sections blocking the trail. I lifted my bike over each of these, but you may wish to switch to hiking at this point; it would be easy to climb over the tree without a bike. You'll hit another, longer mud section about a hundred feet past this tree.

Shortly before mile 2.4, you'll cross the stream that the other reviewer mentioned. It's necessary to walk the bike across this stream, but it's a fairly easy crossing by the standards of this trail.

Around mile 2.8, a quarter-mile section of very heavy rocks begins. I can't fathom taking even a mountain bike across this area; maybe a Marji Gesick rider would find it to be fun. After realizing the rocks kept going, I left my bike at about mile 2.85. But starting at about 3.05, the trail becomes pretty bike-traversable again.

For the next 1.6 miles, the trail could be biked, although it's a bit narrow in areas, with fairly steep drop-offs to the west (right, heading south) as it gains elevation above the river.

At mile 4.65, there was a rock slide at some point in the past, which took out most of the trail. You can still navigate across it on foot, but it would not be safe to try to cart a bike across this area. This is the reason that I mentioned that you'll have to hike for at least part of it.

The trail continues on until mile 5.5, where it ends at some large rocks, steep elevation, and heavy plant growth. You'll be able to hear some rapids behind the large boulder in the river, and bending low, you should be able to go just far enough under the undergrowth to get a nice view of that area, even with a rock to sit on to rest your weary feet.

Along the route, you'll notice a few branching trails, three if I remember correctly. One is just a direct path (straight) versus a river overlook option (right). The more interesting options branch to the left, and I believe these are the paths of temporary lumber railroads. I didn't traverse those on this expedition, but if they're substantial there may be yet more trail in this area to explore.

Wildlife-wise, I have heard there are black bears and snakes in the area, but didn't see any today. I did run into quite a few spider webs, and wound up with a small black spider with white spots on my shoulder, likely a jumping spider. I also saw a recently deceased deer in Kendall. It may have fallen to natural causes - I saw no obvious wound, although I didn't approach too closely - but make sure you wear bright clothing during hunting season as a precaution.

The trail itself is beautiful, especially this time of year. It's currently near peak color, with leaves on the trail, on the trees, and even in the air, falling as you ride. If you're local, get out on the trail this week and enjoy the autumn foliage.

Finally, I'd be remiss to not mention that there are amazing views of the Youghiogheny River from the trail, and several areas where you can climb down to river level for even better views. Nearly the entire river is chock full of rapids for the duration of the trail.

Bigger than it seems

This trail is actually closer to 6 miles. After getting to the small clearing where the railroad hub for Kendall used to be, follow trail across the small stream and continue the trail more than four more miles. The trail follows the Yough, and begins to peter out near a boulder field local kayakers call Devil's Graveyard. Great scenery. Few boggy areas. Try the local diner after a 12 miles round trip. Pros- scenery of both forest and river, easy grade, pet friendly. Con- last three miles are very rocky so watch your ankles, while you're at it- watch for snakes too