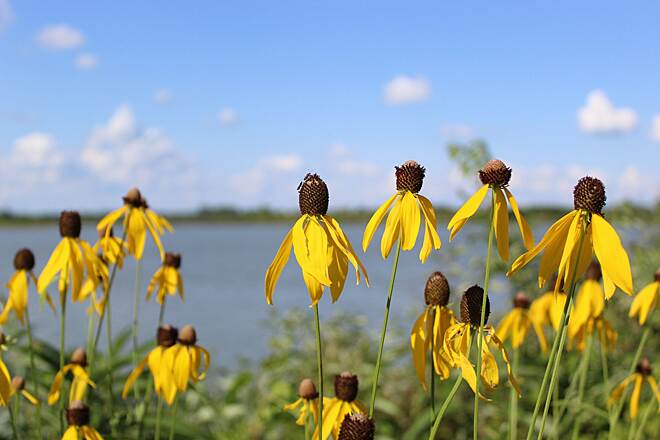 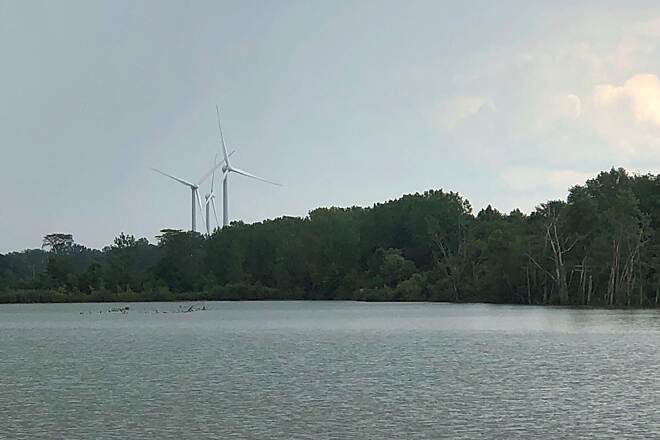 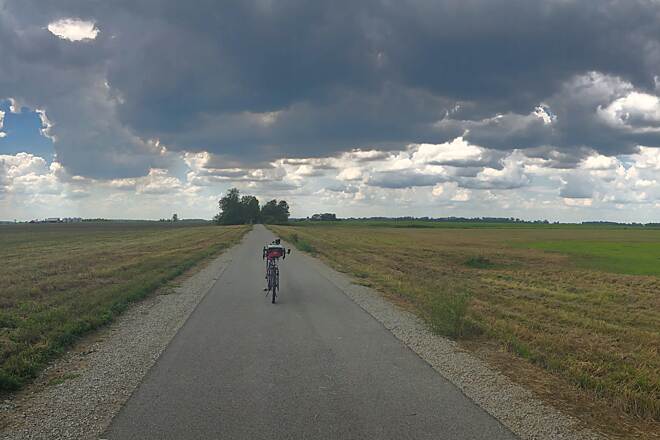 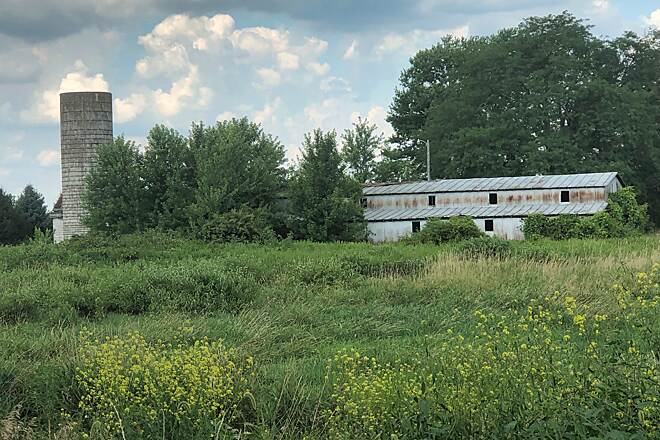 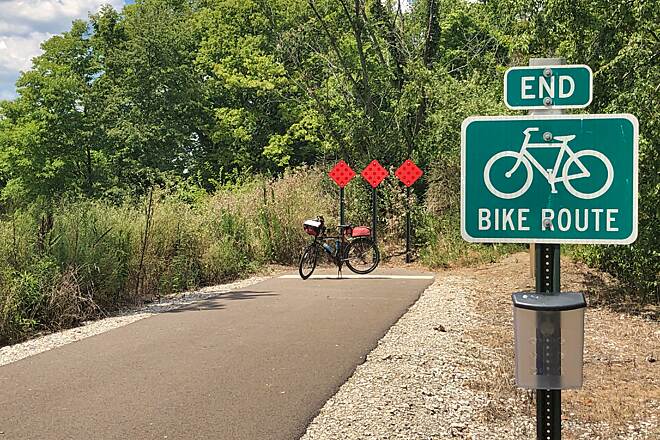 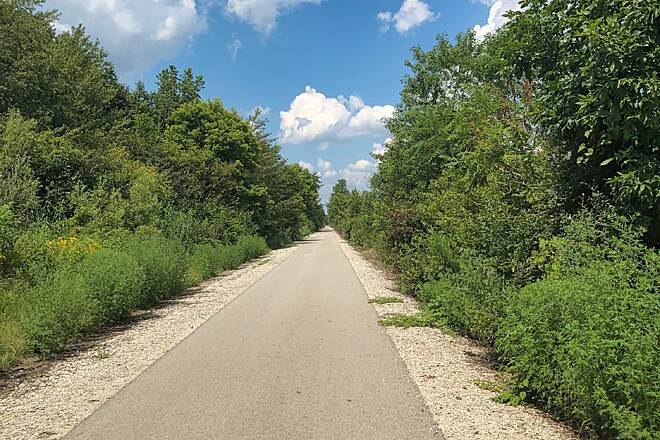 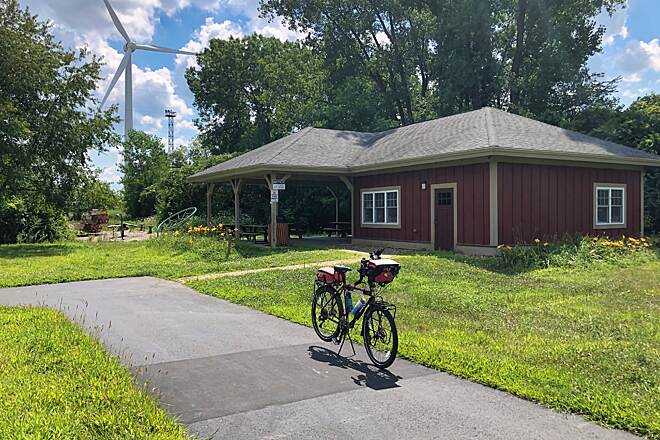 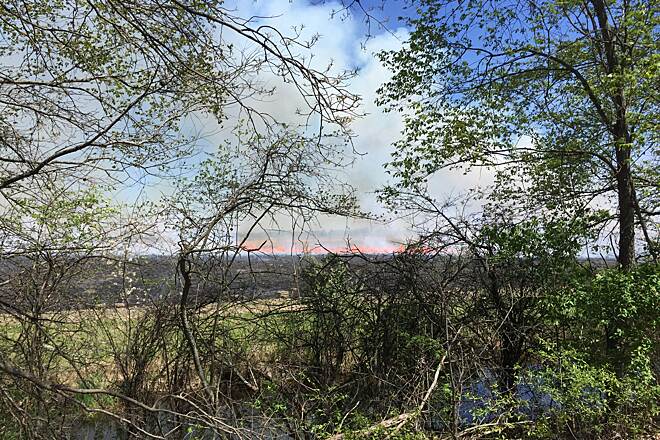 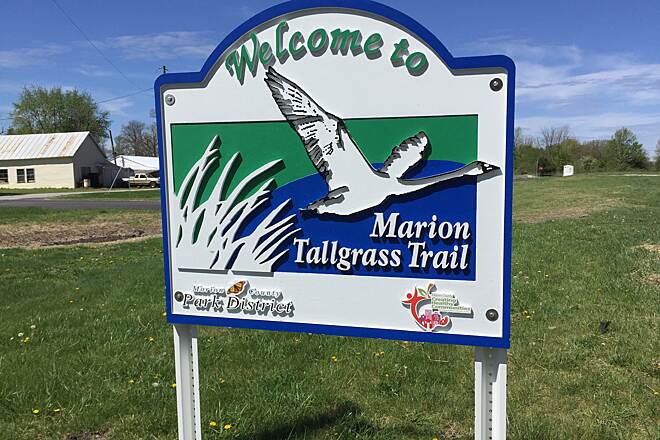 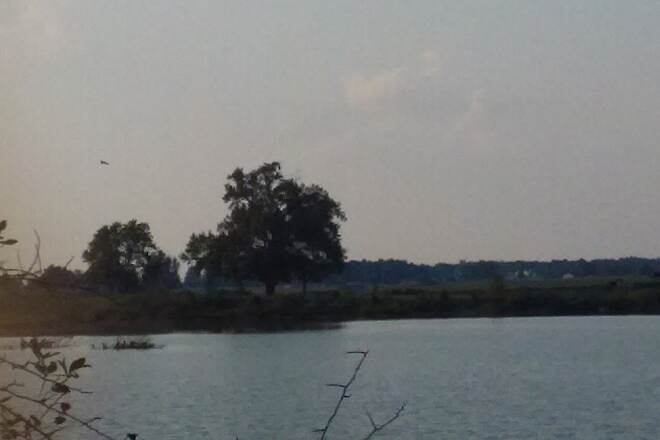 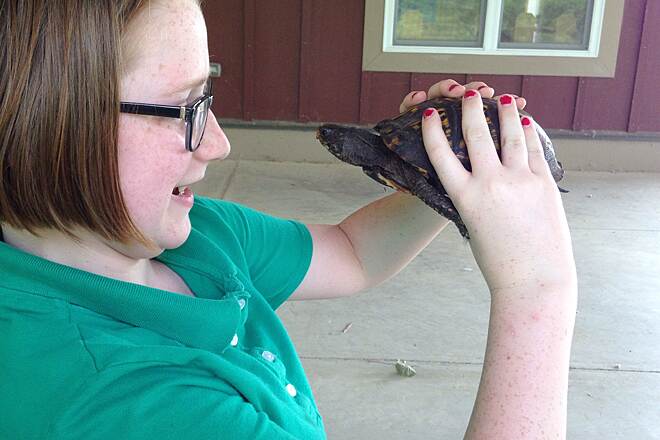 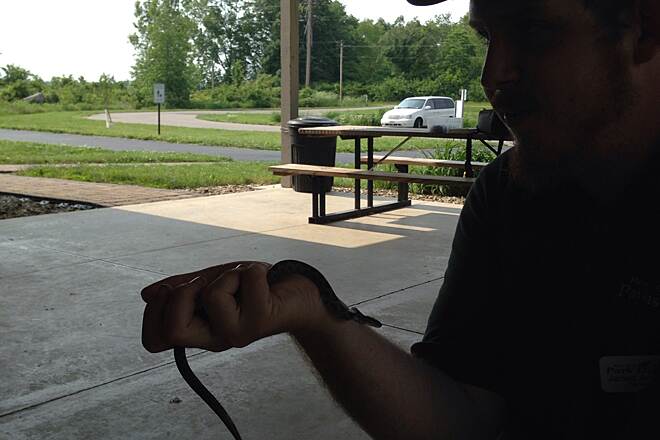 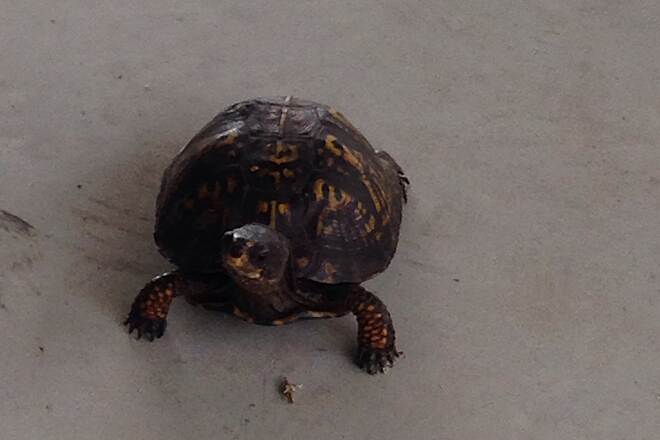 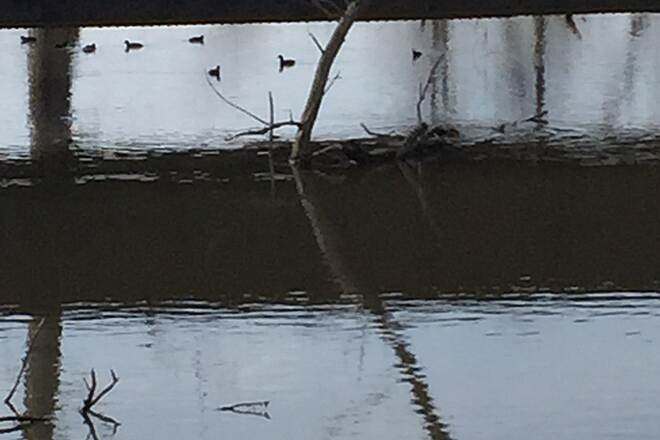 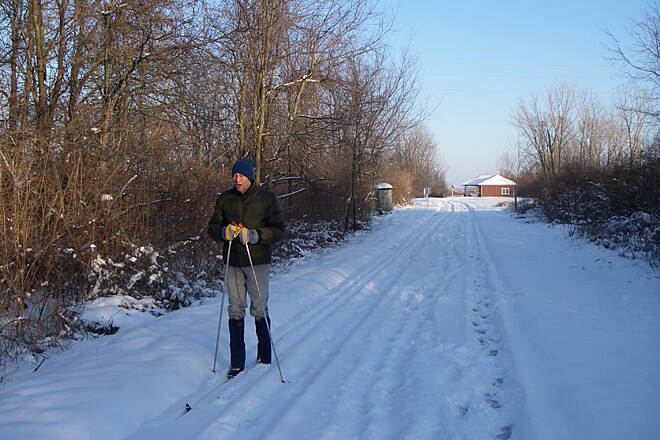 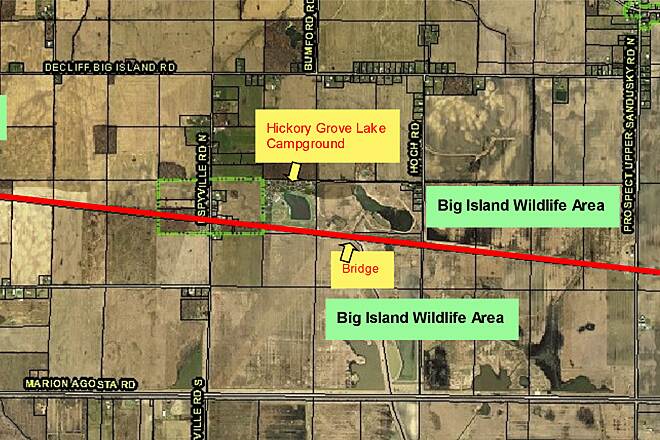 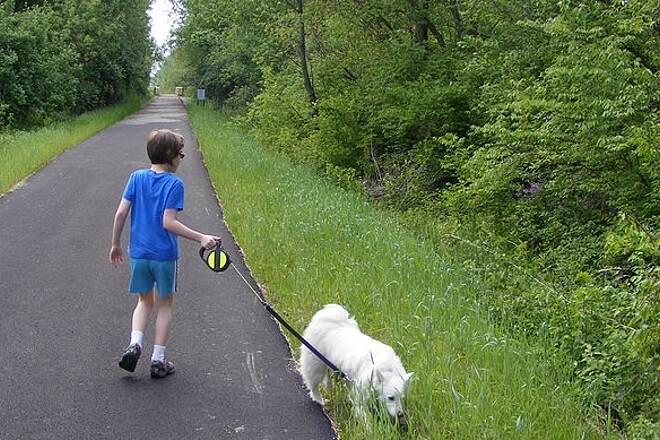 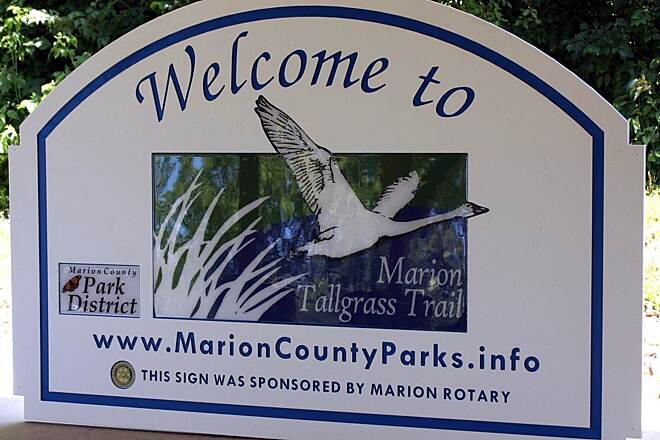 The Marion Tallgrass Trail is a developing rail-trail which will extend from Marion westward on a former Erie Lackawanna Railway corridor. The line was part of the Erie Lackawanna’s main line that once stretched from northern New Jersey to Chicago but was abandoned by Conrail shortly after its acquisition of the distressed railroad.

From the large, east trailhead on Holland Road west to Espyville Road, this section is wooded and includes two restored railroad bridges. Near Herr Road, a large pond is immediately to the north of the trail, making it an excellent spot for bird watching. Indeed, bald eagles and trumpeter swans can often be found next to or above the trail, and there is a large beaver lodge in the center of the adjacent pond. A walking trail encircles the pond.  From Espyville Road to the trail’s current end at Agosta-Meeker Road, this 3-mile section continues along the rail corridor through the Big Island Wildlife Area, offering even more opportunities to spot local flora and fauna. The trail stretches 12 miles west to the Hardin County line.

Parking can be found at the trailhead just west of Marion at 2093 Holland Road. Closer to the west end, there's a paved head located at 1001 Decliff Rd N., La Rue and another further west at 774-1096 Township Hwy 16, La Rue.

A lovely autumn afternoon biking on the trail with my bride of 20+ years. Autumn leaving changing before us, a well maintained trail, with very few others taking advantage of a 75 degree October day. We biked out and back 9 miles each for a total of 18 miles and enjoyed every moment. The trail is largely well screened helping buffer us from the breezy winds today. Great fun to see all of the farmers out in their fields harvesting. We did not experience any of the concerns highlighted in other’s reviews, nor did were we able to see the Bald Eagles.

The mosquitoes were horrible this evening. Never seen anything like it before!

The mosquitos are unbelievable, swarms and unpleasant. We saw several snakes and the bald eagles but you can’t get over the large amount of mosquitoes!!! Won’t be back

Rode this trail last weekend. We saw numerous chipmunks & 2 bald eagles. We’ll be back in the fall.

Moved to this area about 8 months ago. Have rode this trail at least a dozen times. I always start out at the 3 big windmills just outside of Marion. About a half mile in there is a nice little fishing lake. Boats are allowed but no motors. Nice paved level trail from beginning to end (12.4 miles). Many benches along the way. Just past the 8 mile mark there is a nice place to stop and relax with a pavilion and a Porta Pottie. Just know there are only two Porta Potties on this trail. One at the start by the windmills and one just past the 8 mile mark. Also know that there are about 10 roads to cross. But very little traffic on them. All in all a great bike trail. I give it 5 stars.

What a treasure we have in Marion County

I walked the entire 12.5 mile trail, and was so impressed with how it turned out. No matter, whether it is running, biking, or walking it is really a jewel in our community. I am so very thankful to all those who dedicated their time and efforts to the betterment of all of us.

If you haven't yet experienced it, I would highly recommend it to anyone

The Marion Tallgrass Trail is as straight as an arrow for its 12.4 mile length and for the most part it is a green tunnel of trees and shrubs that is surrounded by corn and soybean farms. For this reason people looking to get more of a scenic view of the surrounding country side may want to put off riding the trail until Fall or early Spring. However, riding in the Fall may not be advisable due to hunting season. There were numerous signs along the trail stating that there was absolutely no hunting allowed within the 100 foot wide Marion Tallgrass Corridor. The trail itself is paved and is in excellent shape.

I unexpectedly found the Marion Tallgrass Trail interesting. First, there is almost no change in elevation so it is easy to get up to speed and sustain it throughout the entire length of the trail. However, there are quite a few road crossings (12) that could effect your ability to sustain your speed. Secondly, based on the location of the trail in Mid-Ohio farm country I doubt that you will ever find the trail crowded. I did come across a few bikers and pedestrians on the trail but most of the time I was on my own. So if you’re looking for a ride were you can get inside your own head, the Marion Tallgrass Trail may be the trail for you. Finally, there was a surprising amount of wildlife to be found along this trail. Despite it being around noon when I hit this trail, I encountered close observation of deer, hawks, Turkey buzzards, ducks, chipmunks, squirrels, and ground hogs. Lots and lots of ground hogs. What would I have seen if I had ridden early in the morning or later in the evening?

We rode Marion Tall Grass yesterday and the trail now goes 12.5 miles. It's a beautiful trail and I hope the Hardin county trail enthusiasts continue it even further. If there is a negative, they need more picnic tables along the way. There are 2 porta pots, one at Holland Rd trailhead and the other at about 9 miles.

Now 11.22 miles long and is a beautiful and well maintained trail

Now 11.22 miles long and is a beautiful and well maintained trail. I have rode the trail 3 times this week and have seen plenty of wildlife and heard many types of bird singing along the trail. It is great to see all the new benches and new blacktopped trail. The local community has done a great job developing the trail. I can't wait to see the next section done all the way to the Hardin County line.

Road this trail today. We will be back in the fall. This trail is now 11 miles long. This is a very well maintained trail. The trail is nice and wide. The WCI Biking Division has voted to put this on our honorable mention northern Ohio Rail Trail list. It was interesting to watch a controlled burn of the Brambles to the north. Luckily the wind blew the smoke away from the trail. WCI co-founder Rod was very impressed with the farmlands.

I really like the tall grass trail. It is a relatively short and quick ride and I've rode it hundreds of times. I have got to watch it grow from nothing. Half of the fun for me is watching it grow so I'll kinda few happy and sad when it is finished.

Recent improvements on the older part of the trail include an observation deck at the pond and many benches. Some benches are covered and a play area has been built at the trailhead shelter. The path now extends over 7 miles nearing the county line at Osbun road.

Gem of a trail

We had rode the trail in late July and at that time 3.75 miles were paved. We rode the trail again today and 7.4 miles are now completed. There are benches along the trail. There was a lot of activity on the trail today. Putting in a play area at the trailhead and a deck on the pond. This trail is really awesome and it will be great when totally complete.

A well planned trail, rapidly expanding, and soon to feature gardens. Hopefully benches and trash/pet clean up stations are next *hint*. They recently put up "no tobacco on trail" signs.

We had a great visit. The trail is over 3 miles long now, but in the near future, it will be closer to 14