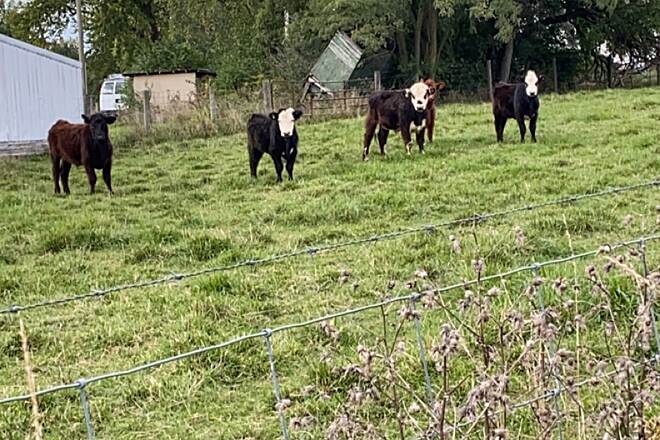 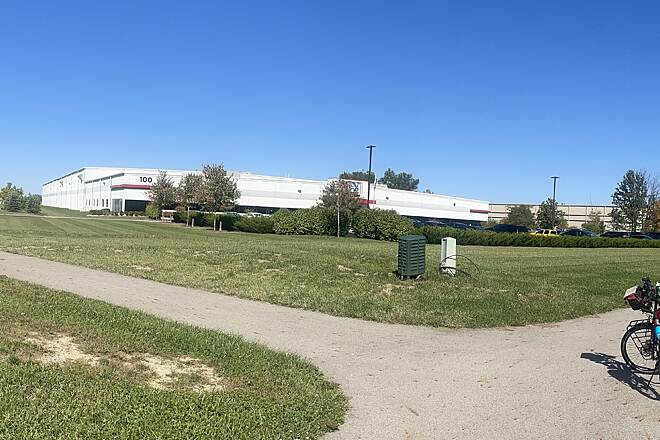 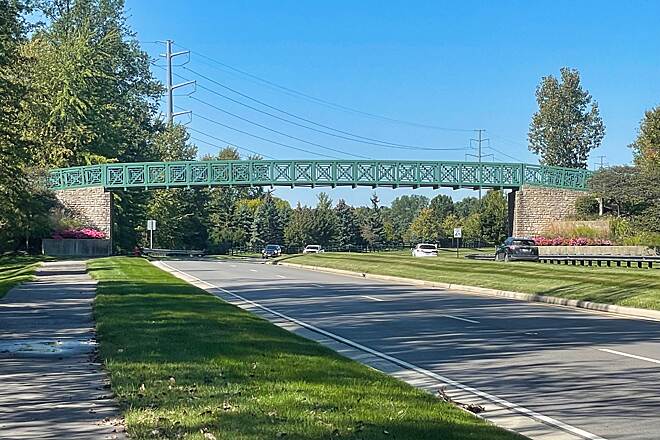 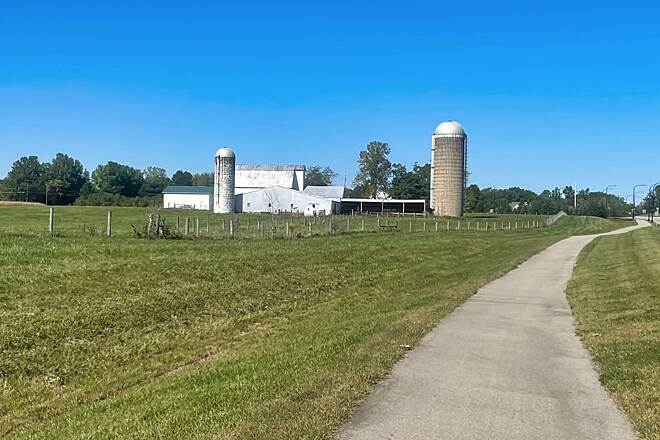 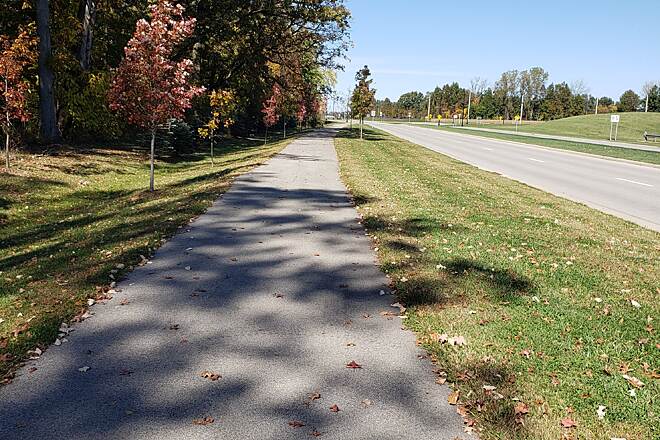 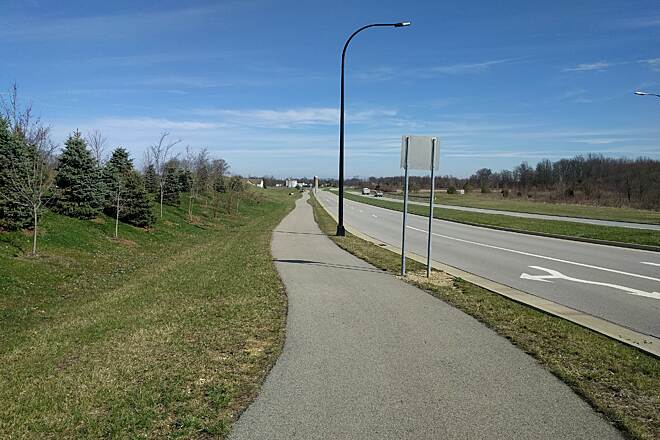 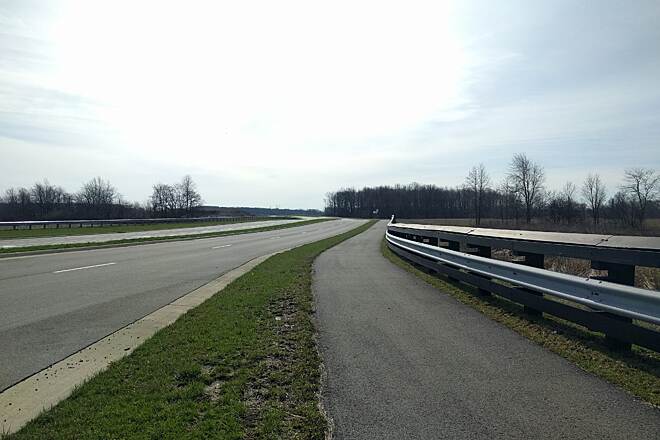 The Sawmill Parkway Trail is a shared use path running the length of the parkway from Delaware to Powell. The trail is paved and mostly sits on the west side of the road. Along the trail are residential subdivisions, businesses and golf courses making the trail a suitable recreation spot for local folks just looking for a place to stretch their legs or ride their bikes without worrying about traffic. The northern half is more rural, with rolling crop fields stretching out to the horizon.

There are five roundabouts to navigate along the trail. Going west about one mile along Powell Road (SR 750) there is a shared use trail to the Columbus Zoo and Zoombezi Bay water park.

The Sawmill Parkway Trail is part of a regional complex of trails known as the OPAL (Oletangy, Powell and Liberty) Trail.

The trail is located in Delaware County Ohio from Powell to Delaware, Ohio along Sawmill Parkway; just northwest of Columbus, Ohio. There is parking in the shopping center at Powell Road (SR 750) and Sawmill Parkway.

Easy ride . Wasn’t too amused with the sites of housing developments but it’s the location . Some adorable steers in the farmland area made the ride worth it .

I rode the Sawmill Parkway Trail on 3/20/2022, starting just north of US-750, and going to the northern terminus, and exploring some of the connecting trails in Powell on the return. Slightly longer than TrailLink reports; my odometer (which tends to slightly underestimate) reported 8.7 miles one way, and I started just north of the official southern endpoint.

The trail's condition is generally very good, although a small section near Olentangy Liberty High School is worn. It should be suitable for all bikes.

The southern half (4.5 miles) is along a relatively highly trafficked part of Sawmill Parkway, with just a strip of grass between the trail and the road. You aren't close enough for it to feel risky, but you're constantly aware of the traffic, and it just isn't very fun to ride. It's kind of like the section of the Olentangy Trail that parallels 315 in that regard, but four times as long. Some shrubberies or other small plants would improve that part of the trail.

The northern half is much more scenic, in part because there is much less traffic once you get past the last subdivisions. It's a calm, relaxing ride, and as you approach the northern end you'll likely see some Cessnas, maybe a Learjet, flying overhead. Once you get to US-42, cross both zebra crossings and continue along the path, taking a right at the dead end. You'll be able to watch planes taking off and landing at Delaware Airport. Definitely a cool experience that most trails don't offer.

Once you return to Powell, you'll find a surprising amount of connecting trails; Powell has done a good job with building trails, and if they aren't at the level of Westerville or Dublin yet, they're at least well on their way. It should be fairly easy to find a place to eat, or you can just explore at random. Only downside is bike parking hasn't always caught up with the trail.

Which leads to the other point - other than the parks that connect within Powell, there isn't much supporting infrastructure north of route 750. A few small parking areas (and I did see a few people out walking who had parked there), but no water, restrooms, or signs. At 17 miles round trip, it might be nice to have some amenities partway through - or if there are some via a branch, then signs to them.

Recommended if you're local, or if you've already done the Olentangy/Alum Creek/Scioto/Genoa Township trails and want to ride somewhere new.

An Important Piece of Infrastructure in a Growing Area

I recently rode 18.73 miles on an out-and- back ride on the Sawmill Parkway Trail between the cities of Powell and Delaware, Ohio. This trail is an example of a trail type that is indicative of many midwestern cities, such as Columbus, Ohio, where surrounding once rural farming communities are transitioning into more developed suburbs. This trail is similar to other Columbus area trails such as the the Buckeye Parkway Multi-Use Path in Grove City and the Hellbranch Trail in Hilliard. It appears that the Sawmill Parkway Trail is destined to become the spine of a developing trail system between the communities of Powell and Delaware as this area of Delaware County transitions into a Columbus suburb. As you travel north on this trail you can see that it is much easier to put these trails in before open land is developed rather than trying to fit in a trail after an area has built up. Kudos to local government officials for being forward thinking. At present, the northern end of the trail is much more rural. Here, farm land is found on both sides of Sawmill Parkway, but there are already roadway cut-ins into these fields anticipating continued development of the land into future residential, retail, and commercial areas. As growth occurs, more trails will need to be built along the streets crossing Sawmill Parkway in order to create greater access for the area’s present and future residents in order to make the Sawmill Parkway Trail into a useful alternative transportation network.

As for the trail itself, it is a paved pathway that is in good shape, although the southern end in Powell is beginning to show its age. The trail itself crosses Sawmill Parkway twice, once at Big Bear Avenue in Powell and again at the US-42 intersection in Delaware. Definitely use the crosswalk call buttons at these crossings. Automobile traffic on Sawmill Parkway is heavier on the southern end of the trail from the shopping district to Olentangy Liberty High School. Extra caution should be taken at street crossings in this area by following pedestrian crossing signals. Starting with the Sawmill Parkway-Hyatts Road intersection, traffic lights have been replaced with roundabouts. There are five of these roundabouts along northbound Sawmill Parkway until you reach a final traffic light where the parkway runs into US-42 in Delaware. The trail’s street crossings at these roundabouts have been moved out from the center of the circles. Visibility is good for the trail users at these traffic circles but caution should still be practiced here, particularly when traveling south on the trail. This is because southbound cars could be turning right onto the street you’re crossing from behind your line of sight. Traffic becomes lighter as you enter more rural areas the further north you go along the trail. However, as the area along the parkway develops, traffic will become heavier and these crossings at the roundabouts may become more problematic.

I biked the trail on October 17, 2020. Many sections in the lower portion were newly paved and most curb transitions between trail and road were also new. The orange cones were still in place. There is not any crushed stone as the description mentions. I could tell that the grass had been cut back from the trail, which brought it back to intended width. So the comments of a previous reviewer who said the path was narrow, sections torn up by development and bumpy, no longer apply. The few sections that had some grass growing in the cracks were not a problem. The one section where the trail was blocked crossing the new road by a new development looked like it was ready for cement. It was not an issue for me to go around it. It is true that there isn't any shade, but trees are planted. So many many years from now, some of the trail might be in the shade. :-). I did register 9 miles, not 7.8 miles, from the parking lot by Mac Donald's on the corner of Attucks and Sawmill Parkway to the north where it hits Rt 42. Lots of parking by businesses and restaurants at the southern end point. There are many road crossings, but I still managed to get over 13 mph between the roundabouts. Overall a nice trail for the business and residential/subdivision areas.

The north segment of 5+ miles is great surface, easy crossings at roundabouts. South of Hyatts Road, the path is narrow, section torn up by development, narrow and bumpy.

This trail has lot of stops. It is open with no shade & close to the road. It was hard to get a smooth ride. As mentioned this trail has 2 types of road & might not be good for all types of bicycles.