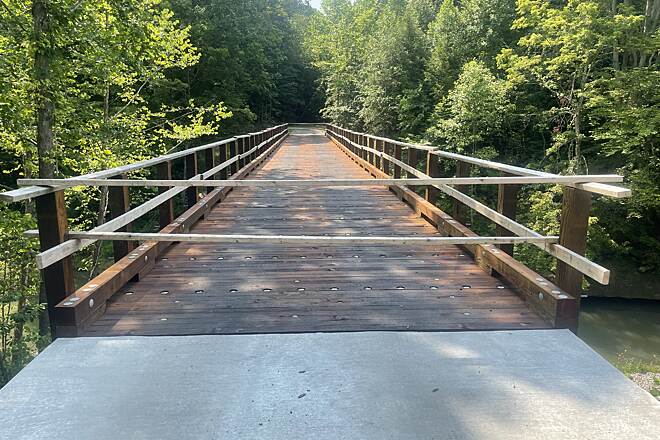 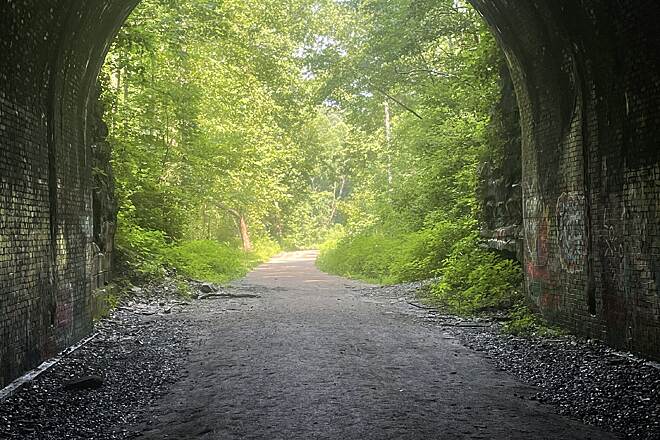 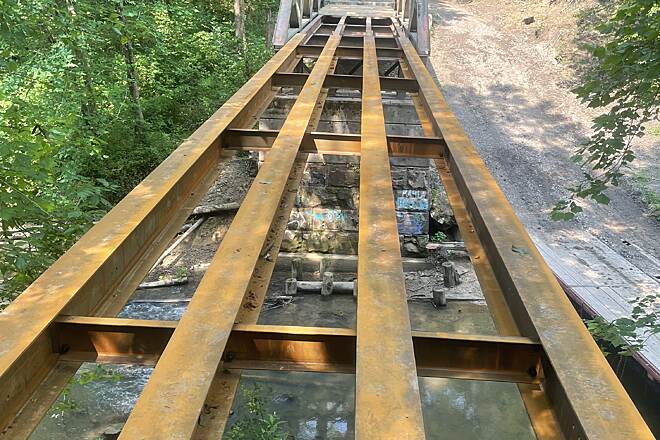 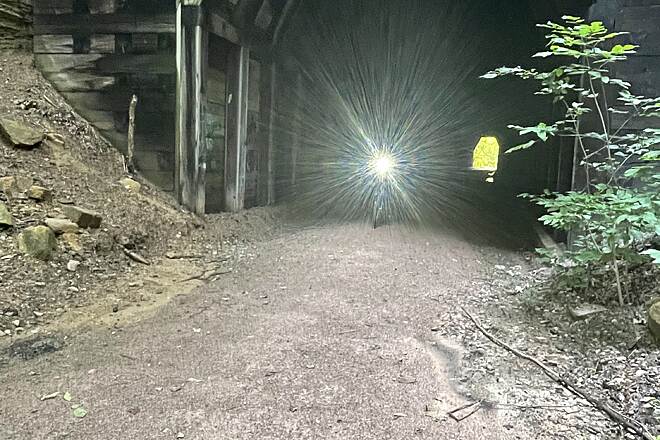 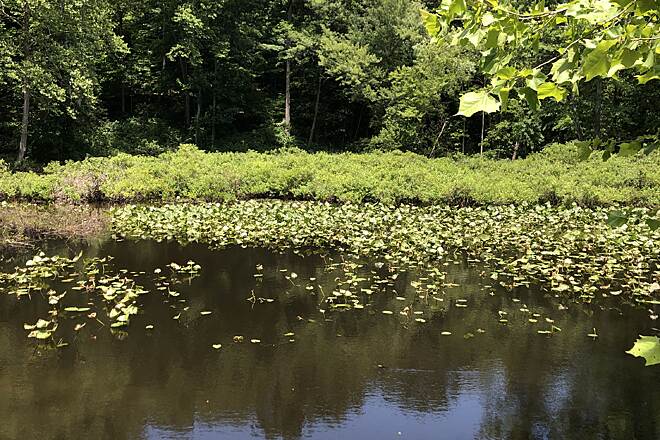 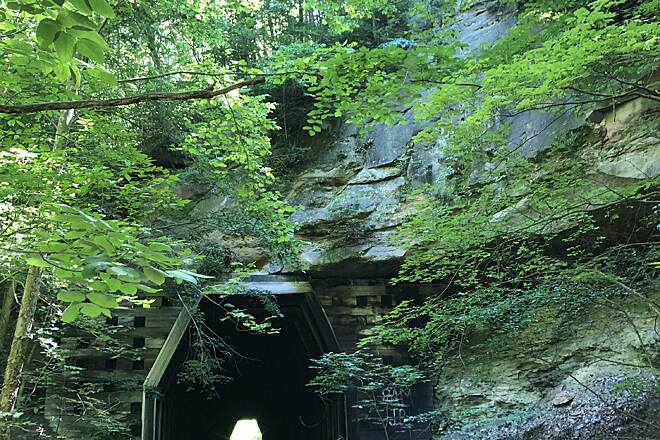 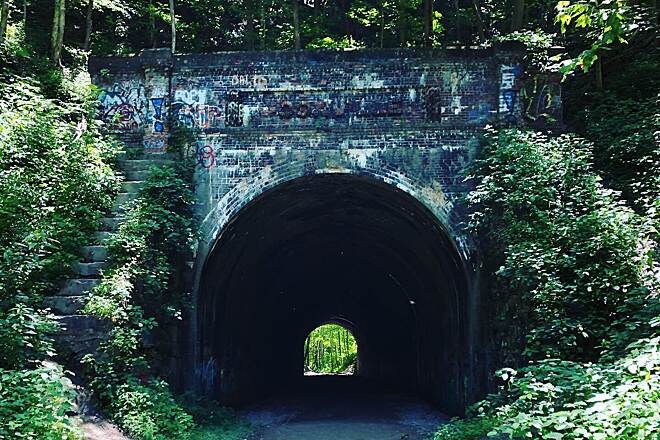 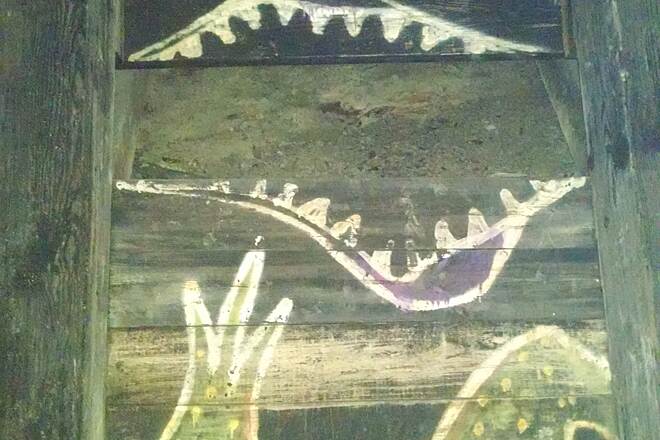 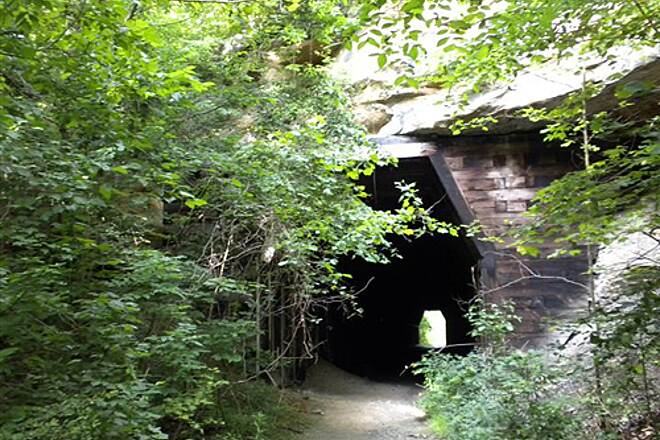 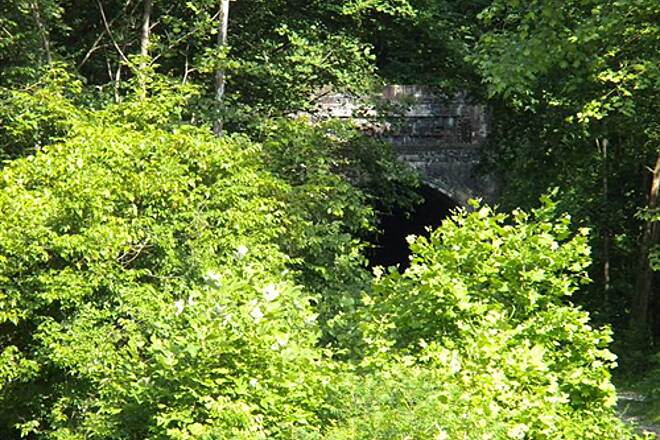 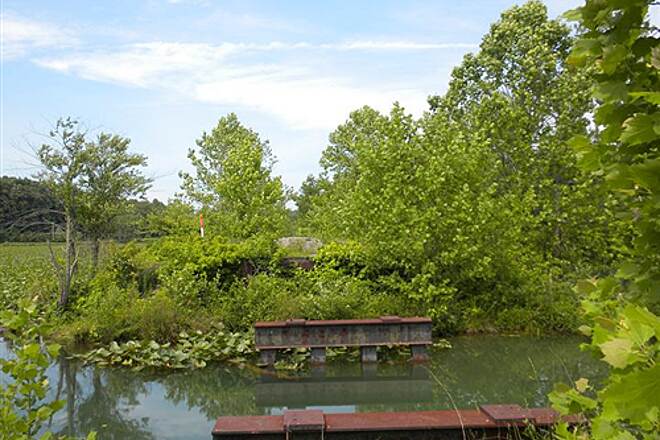 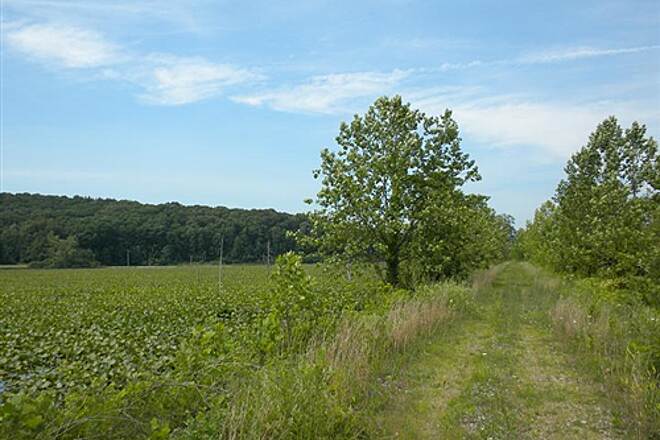 The Moonville Rail Trail is planned to be a 16-mile route that utilizes the former Marietta and Cincinnati Railroad that began service in the 1850s. This railroad provided only industrial service, never carrying passengers because of its proximity to the Red Diamond Dynamite plant.

Currently, 8 miles of unpaved trail, usable for horses or walkers and hikers, are available from Zaleski to Mineral. Future plans call for the trail to extend approximately 8 miles to the east and link with the Hockhocking Adena Bikeway in Athens. To the west, the trail will eventually extend to the Jackson County line.

The trail runs from the western end in Zaleski up to the historic Hope Schoolhouse on an unimproved surface. East of the schoolhouse on Wheelabout Road, several bridges are missing from the corridor over the Raccoon Creek, but trail users can use the lightly-traveled, gravel Shea Road to continue east towards the Moonville Tunnel. From the tunnel trailhead and parking, the remainder of the trail east to Mineral has a crushed limestone surface, with new creek bridges installed in 2021.

This in-progress rail-trail will take visitors through beautiful southeast Ohio forest lands including Zaleski State Forest; the communities of Zaleski and Mineral; past New Marshfield School, which ceased operation in 2004, after more than 100 years of continuous use; and Lake Hope wetland areas. The corridor holds water on both sides of the trail creating a wetland area that is home to numerous species of flora and fauna.

Additional points of interest along this trail are the two unique and historic tunnels. King Switch Tunnel is a 120-foot structure carved through the rock and lined by a series of 12x12 wooden beams. The Moonville Tunnel is brick lined and thought by some to be haunted.

Parking is also available at the Moonville Tunnel trailhead, located midway along the trail off of Hope-Moonville Road (CR-18).

Federal Mine Safety Funds Are Leading to Much Needed Trail Improvements

Last month I rode 10.2 miles on an out-and-back ride on the Moonville Trail starting in the Athens County hamlet of Mineral and riding west toward the town of Zaleski, Ohio. I made it about 2/3rds of the way to Zaleski, but once the trail surface changed to grass covered railway ballast I decided to turn around because I don’t think I could have withstood riding an additional four teeth-rattling miles.

The trail is currently being upgraded due to the federal government wanting to seal a bunch of old abandoned mines in the hills surrounding this old railway. According to workers I met repairing a pair of trail bridges, funds were granted to Vinton County to create the needed infrastructure to enable the equipment needed to seal these old mines to safely reach them. This means that all the bridges along the trail are being upgraded or replaced in order to carry trucks, other power equipment, and supplies needed to seal those old mines. The surface of the trail has had a crushed stone/dirt mix spread over the old railroad ballast surface up to the point where I turned around.

The trail is quite isolated so make sure you have plenty of water, a spare inner tube, and some repair tools. Most of the trail is shaded as it passes through Ohio's Zaleski State Forest. You will also pass by quite a few lakes and marshes as well as cross over the meandering, deep, and slow-moving Raccoon Creek numerous times. Bug repellant would be a good addition to have with you at certain times of the day and year. There certainly seems to be plenty of opportunity to see lots of wildlife, though current construction on the trail may have animals avoiding the trail during typical working hours.

Like several of the other TrailLink.com-listed trails in southern Ohio, the Moonville Rail Trail has tremendous potential, but is not yet ready to shine. I’ll have to come back in a few years when the work is done to give an updated review.

We met with a construction crew today. They are restoring the bridges, clearing fells, and adding gravel. Completion is expected June 2021.

No bridges to cross creeks, trail not well kept

We attempted to hike the entire trail today but it’s not possible to cross the creeks. There are no bridges and water was too deep. Lots of brushy weeds and poison ivy on the path. We did drive around to different points on the trail and saw King’s Hollow tunnel and Moonville Tunnel. We crossed one river by walking across on a log and made it back to “bears hollow” pond. Next time I’ll try parking in Zaleski to see how far one can take the trail from that direction.

Would be a great trail if it's ever upgraded like the Hockhocking Adena Trail! Also, the rail line did in fact host the Amtrak Shenandoah until 1981, the line was formally abandoned in 1987 and the tracks were removed in 1988.

Bridges Out, No Way to Get Around, No one to contact

We went out to Moonville expecting this to be as high quality as the Athens Rail Trails but were sorely surprised to see nothing has been done. It looked the same as when we visited 15 years ago...actually, much worse. We are avid hikers throughout the Midwest and have hiked the Miami Valley Rail Trail and others throughout the state. Oh my gosh! The Moonville Rail Trail was in horrible shape. There is no way to get to Moonville without crossing a treacherous section of deep Raccoon Creek or walking a poison-ivy ridden trail rutted and unkempt. Trees have fallen on the path and have not been cleared. There were even saplings growing along the trail. The rail trail is shabby at best, thick grass and rutted from horse hooves. It is not recommended for children or anyone who does not usually hike. There is no where to park that is safe and this is certainly one of the most dangerous sections of Rail Trail we had seen across the state. I definitely do not recommend this to anyone on horseback or on foot until something is done to improve the safety of the area. There were several older couples with family groups when we went that came from out of state to see the Moonville Tunnel and it was a great concern that they could travel the route safely. We tried to contact someone about these concerns, but the e-mails do not work. There are also no hours posted or rules and regulations online or posted at the site.

It was a great experience to visit the Moonville and Kings Hollow Tunnel. The website
has no current information.emails are bouncing.Their latest news letter is 2009.
whats going on.

The Moonville Rail-Trail right-of-way is owned in part by Vinton County, Ohio Commissioners, and by Athens County, Ohio Commissioners. The trail is passable but there are overgrown stretches and many water crossings with no bridges. The governing organization is trying hard to find funding to build new bridges to make the trail continuously usable in all seasons. The website is: