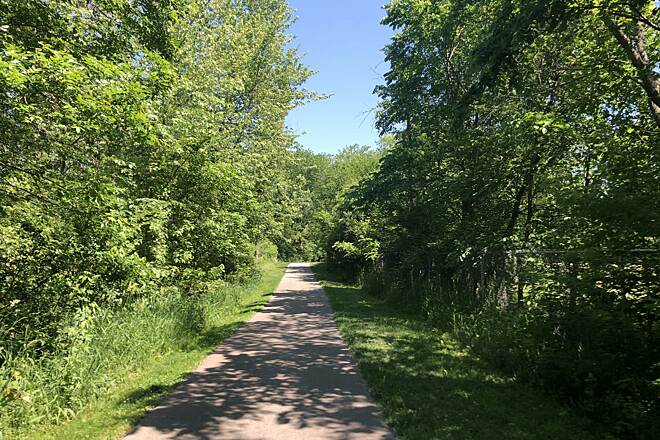 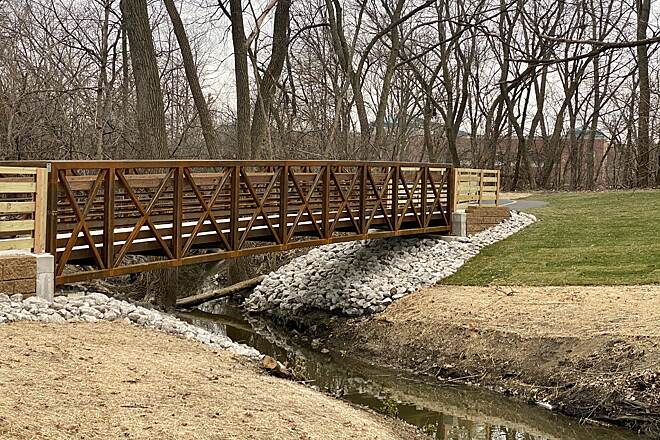 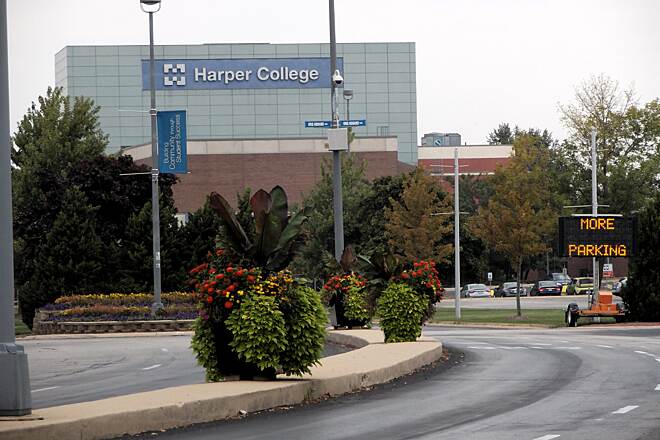 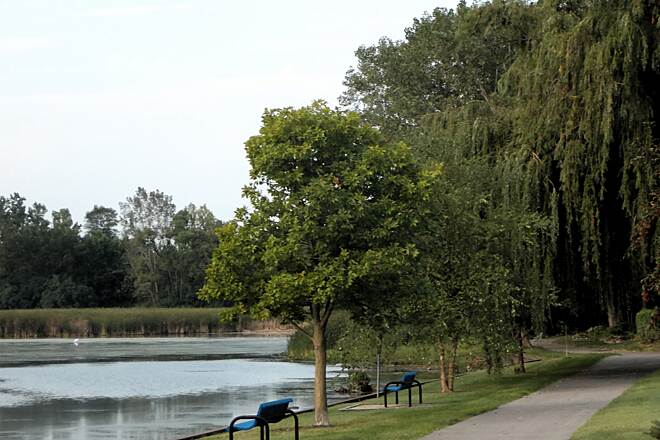 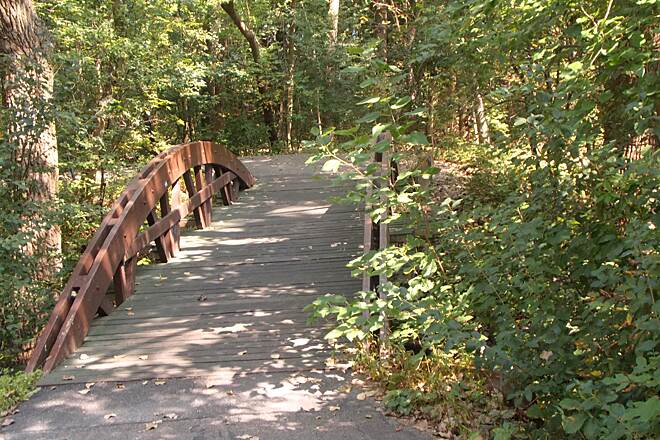 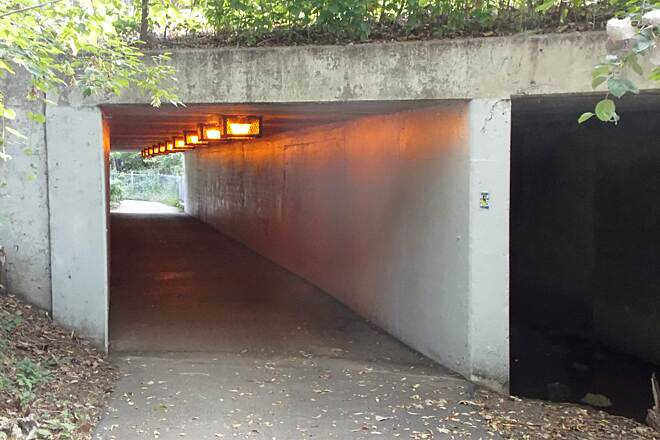 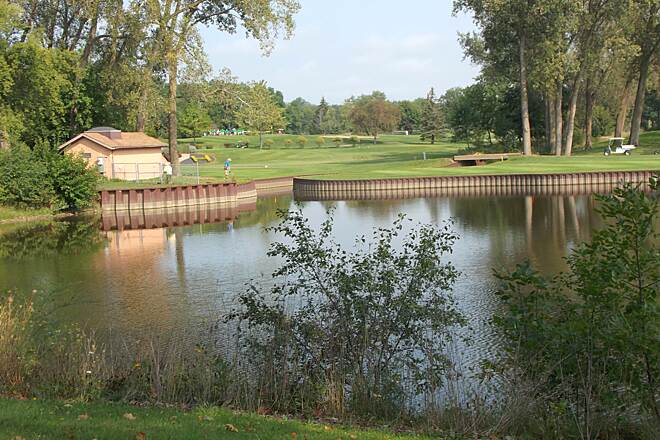 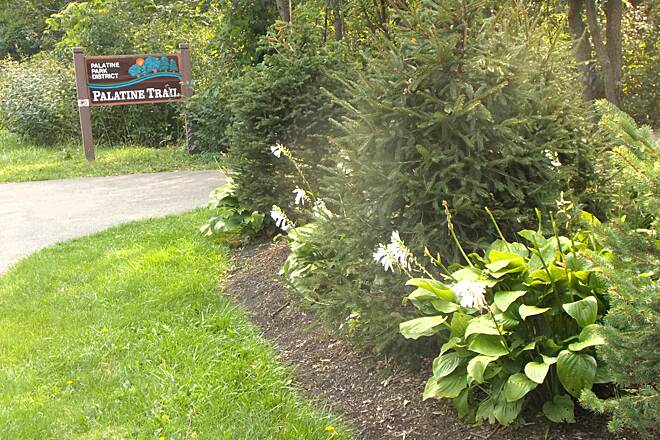 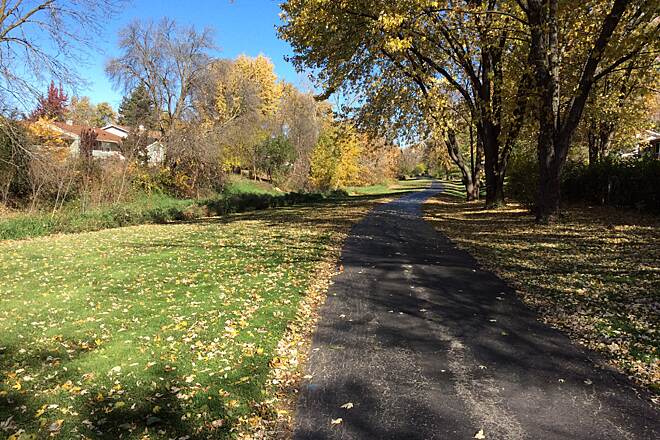 The village of Palatine has connected many of its community assets with two long sections of off-road, multi-use trail. The more popular northern section is the one most references call simply and exclusively the ‘Palatine Trail.’ But both sections are of similar length, managed by the Palatine Park District, and connected with a marked on-street bike route.

Each section of the Palatine Trail also connects directly with trails through area forest preserves: The northern section connects with the Deer Grove Trail; the southern section, with the Algonquin Road Trail/Paul Douglas Forest Preserve Trail.

Northern Section: The northern section of trail begins in the west with a short sidewalk passage along Dundee Road, connecting the forest preserve trail with Palatine's only section of rail-trail—a north-south alignment of the old Palatine, Lake Zurich and Wauconda Railroad. Opened in 1912, the PLZ&W was an 11-mile, short-line (and short-lived) railroad providing freight and commuter service to these three towns.

The rail-trail part of this trail is heavily wooded and hilly in places. On eastward from there, the trail passes a lovely park and golf course area. Then it's on to an open electric utility corridor, running west to east for the long middle part of the trail. This is punctuated only by a turn to approach the safe-passage viaduct under heavily trafficked Hicks Road. To the west of the viaduct is a bit of wooded trail and a spur to the public library; to the east, it's one block of houses along the road, then back to open trail again.

Towards its eastern end, the trail turns back to the south for a short neighborhood passage. There's a lake, a park, trees and open areas before the trail comes to an end at a small school and playground.

Southern Section: The southern section of the trail begins in the west with a long, straight stretch along Algonquin Road. As the trail turns to go around Harper College, it passes a small reservoir that is stocked with fish and attracts local fishermen. On to the north, there is a trail spur that continues to an equally beautiful Peregine Lake. Back to the main trail, it runs along busy Euclid Avenue for a ways, then turns to run through a neighborhood of apartments and on to connect even more neighborhoods and their amenities.

Nice trail with minor stops in between !!

I was looking for parking on Dundee rd to get into this trail, then realized I had to park in the Deer Grove trail and then cross Dundee and get into the trail. It’s was really nice and smooth ride until Hicks rd. After that there were multiple minor stops. But overall it was good to ride this trail. Really liked the atmosphere and the clean and well maintained path. Overall good experience!!!

Nice smooth ride, in and out of the trees running along a creek. Very pretty!

Terrible for inline skating. Hills with poor pavement, blacktop repairs that get sticky with heat.

Terrible for inline skating. Hills with poor pavement, blacktop repairs that get sticky with heat.

Rated by Miki the 8 yr old- it has cool downhills, and its fun cause there's ducks crossing; there's parks. You shouldn't go at night cause i just did, and its pitch black.

A Tale of Two Trails

We're out-of-towners, always looking for new places to go and new trails to ride. Paved, off-street trails, that is. We like to ride safely at a leisurely pace, enjoying nature and urban surroundings alike. We were happy to find Palatine has two sections of trail that looked interesting: The classic 'Palatine Trail' that connects to the Deer Grove Trail in the north; and a southwest section around Harper College, which also connects to a couple of other significant off-road trails through natural areas. We stayed two days to ride all we could of these trails, and enjoyed our time immensely.

It was good to see so many townsfolk enjoying the trails, as well. Older folks, mothers with small children, bicyclists. Mostly using the trails for recreation and exercise, it seemed. Safe and pleasant surroundings, with lots of pleasant sights to enjoy along the way. You see my five stars above.

Such a pleasant ride

We rode this trail from Windsor Ave. to Dundee Rd. The last few miles were as pretty and as pleasant as you are going to get in this area. The trail winds through forested areas, beside a creek, with frequent bridges to clatter across. If you continue off the trail west down Dundee Road, you hook up to the Deer Grove Forest Preserve. For the earlier 6 or 7 miles -- very pleasant, sunny, mostly on an asphalt path down a utility easement. There’s not a lot of water on the trail and few potties, so be warned.

We entered the trail at Winston and Anderson Dr. We took it north and west about as far as Ashwood Park. Nicely paved - some natural areas and some of it runs behind houses of Palatine (separated by grassy areas). If you need a break, there's a Mariano's at Hicks Road and 1st Bank drive off the trail.

For a suburban trail, this one is very good. The main train from Anderson to Dundee is wide and well-marked with only a handful of road crossings, making it a very easy ride. I really like that it is it's own trail, not just a section of the regular road, so you don't have to worry about car traffic. There are parks w/ water fountains along the way and the Palatine Library as well for drinks, restroom breaks, vending machines, etc.

"The Palatine Trail is owned by the Palatine Park District and is located in Palatine, Illinois. The main trail is roughly eight miles long. Several spurs off the main trail add a few more miles.

The main trail begins near the intersection of Winston and Anderson Drives on the east side of Palatine. To get there take IL 53 to the West Palatine Road exit. At the first stop light (Winston Drive) turn right (north). Take Winston Drive to Anderson Drive, turn left (west) and the trail will be on your right (Maple Park will be on your left and if you cross the creek you have gone too far). You can park your car on any local street.

The Palatine Trail is also connected to the Busse Woods Bike Trail (Ned Brown Forest Preserve) via a bike route on residental streets (the route is marked with ""Bike Route"" signs). The route starts at the start of Palatine Trail and ends at the Busse Woods Trail at the Intersection of Golf and Algonquin Roads (IL 58 & 62).

One of the Palatine Trail spurs connects to Harper Community College (though much of the route involves riding down residental streets; this route is also marked with ""Bike Route"" signs).

Access to the Busse Woods trail can also be made from Harper College via another bike route."