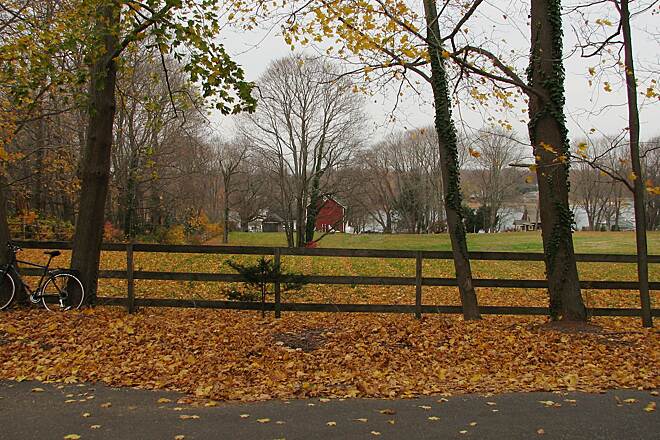 This shared-use path was built as part of the improvement of NY State Route 347 in Suffolk County. SR 347 is a 15-mile arterial between Hauppauge and Port Jefferson, and the trail is envisioned to stretch the entire length of the roadway. Currently, however, it extends nearly four miles through the town of Smithtown and its hamlets, Hauppauge & Neconset.

The path sits on the south side of SR 347, and is divided into two travel lanes. It begins at its intersection with Townline Road and ends just east of Gibbs Pond Road, passing by residential, office and commercial areas. Rest stops are provided, with benches and interpretive signage. Bus shelters have also been sited in intervals along the route. The trail is smooth asphalt, with pleasant landscaping and slopes slightly upward towards the Gibbs Pond Road endpoint. There are several intersections with streets and driveways along the way, and the Terry Road/ County Road 16 is the widest of these. As always, proceed with caution at these points.

Users may be able to park at the businesses along the trail.

no lighting along trails

I have walked biked and jogged along greenway trails in Hauppauge along 347 from route 111 to Terry Road numerous times. Lately i run at night as do several others who i see along the trails. I have never seen the giant solar lights along the trail come on. The bus stop lights are on but the lamposts are never on and the paths are very dark I use a flashlight but others don't and it can be dangerous with debris along the pathway. I can't be the only one who as complained because it seems that since its inception they have never worked and i don't know why it took so long fpr me to complain. Concerned runner, Thank you