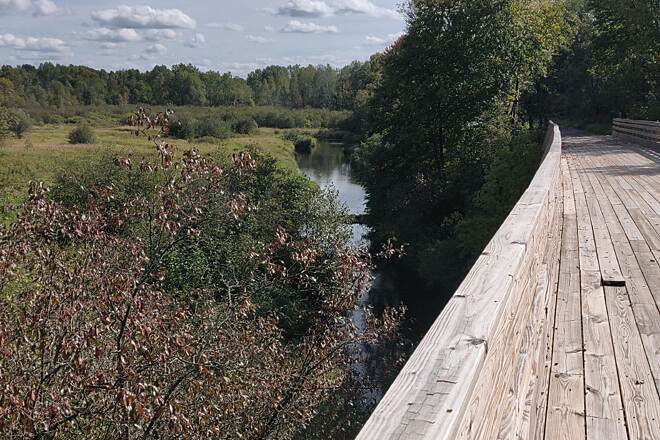 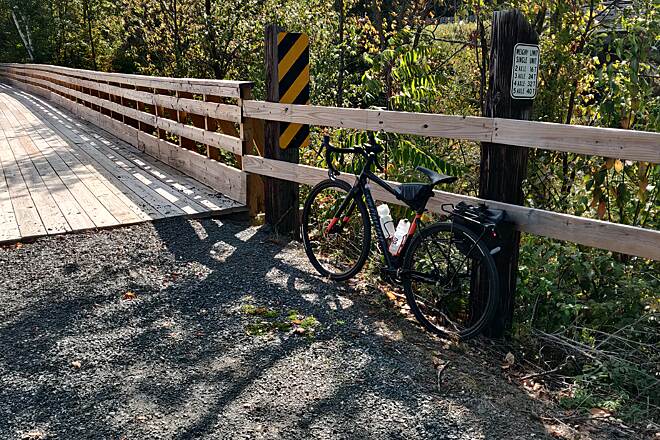 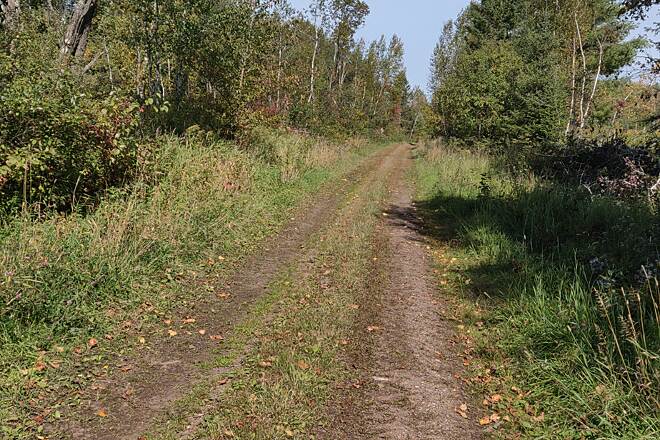 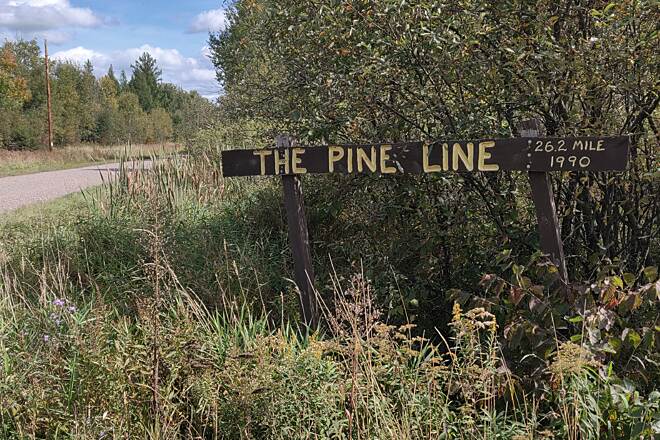 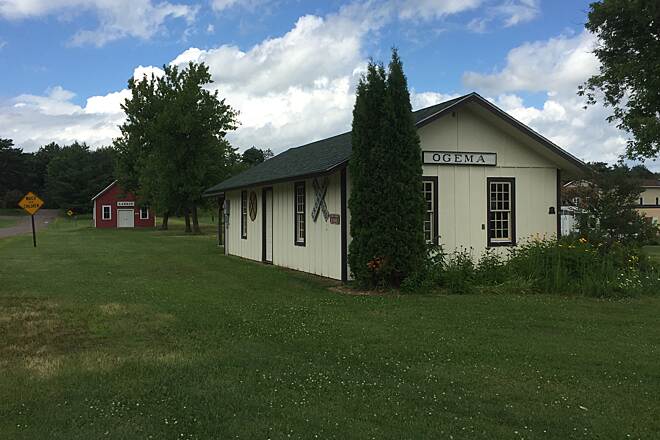 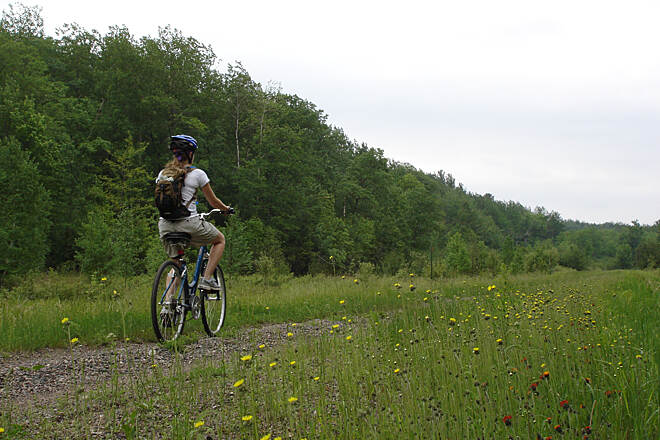 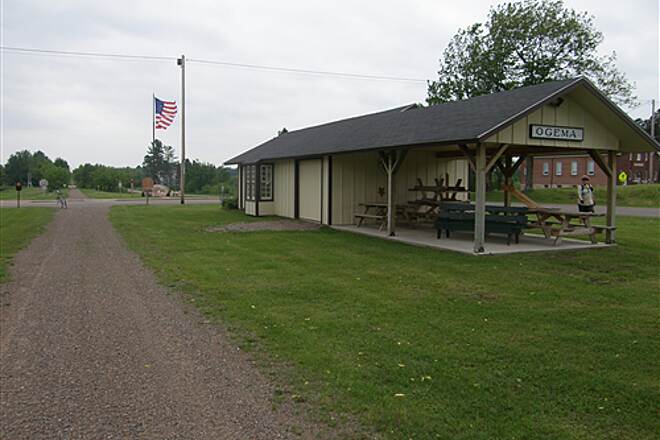 The 26-mile Pine Line Trail calls to mind a time when trains loaded with timber chugged out of northern Wisconsin’s great white pine forests. The local economy still depends on lumber, as sawmills are at work in Medford and Prentice, located at either end of the trail.

The trail follows a section of the Wisconsin Central Railway, which launched rail service in 1876 between Lake Superior and Chicago. The Soo Line took over until 1985, when the Wisconsin Central Ltd. got the rail bed, but it ceased to use the line in 1988. Price and Taylor Counties then acquired it for use as a trail.

In the mid-1800s, lumberjacks had been somewhat selective in harvesting timber because of difficulties in getting the lumber to market. The arrival of the railroad changed that and ushered in the so-called Cutover period of the late 1800s and early 1900s, when whole forests were reduced to stumps. Immigrants later cleared that land for farms, while conservation methods, begun in the 1930s, created new forests. You’ll see farms and second-growth forests from the trail.

The city of Medford at the trail’s southern end dates from the 1870s. Much of the downtown streetscape, including the 1913 vintage Soo Line railroad depot located between East Broadway Avenue and West State Street, appears much as it did in the early 20th century.

Beginning in Medford, you’ll travel on screened limestone for the first 3 miles; after that it’s crushed gravel. Dairyland farming dominates the landscape as you leave Medford. At 5 miles, you’ll pass through the crossroads community of Whittlesey as the land around the trail alternates between farms, forests, and the Black River wetlands where you may see beavers at work.

Five miles up the trail, you’ll arrive at the Chelsea community, a former railroad stop where the second-growth forest becomes the dominant feature. Another 4 miles and you’re in Westboro, another former whistlestop with cafés. If you take County Road D about 8 miles west, you’ll find camping and hiking in the Mondeaux Hardwoods State Natural Area of the Chequamegon-Nicolet National Forest, where the Civilian Conservation Corps planted trees in the 1930s.

In the 6 miles between Westboro and Ogema, you might notice a slight grade as you head over a glacial moraine. A restored railroad depot provides a welcome rest area in Ogema. If you’re hungry, hit a nearby restaurant for some true Wisconsin fare: fried cheese curds.

The last 5 miles from Ogema is slightly downhill as the trail ends at a parking lot on Morner Road.

The trail in Price and Taylor Counties is open to snowmobiles and ATVs from December through March when the temperature is below 28 degrees. UTVs are allowed on the trails during those conditions only in Price County.

To reach the southern trailhead in Medford from US 51, take Exit 208 onto westbound SR 64 in Merrill. In 9.3 miles, bear left (south) onto SR 64/SR 107. In 1.9 miles, bear right to continue west on SR 67/SR 107. In 25.2 miles, turn right onto Luepke Way. Go 0.9 mile—Luepke Way becomes Centennial Parkway, and you’ll pass restrooms in Medford City Park—and turn right onto W. Allman St. Go 0.2 mile and look for trailhead parking on the left. Parking also is available on River Drive, just past the trail on your left.

To reach the northern trailhead in Prentice from US 8, exit just west of Prentice on SR 13, heading south. Go 2.7 miles, and turn left onto Morner Road. Go 0.7 mile, and look for parking on your left and the trail across the road on your right.

Amazing Trail — Until It Wasn’t.

Rode the Pine Line trail out of Medford — (June 31, 2022) This was a little gem of a trail. Parking was perfect. Great wooded scenery and farms along the route. Gravel surface was nicely graded and we noticed that every mile was sponsored by someone. We rode like this for about 17 miles — perfect ride, perfect day, no traffic, crossings were primarily over private driveways. Then you cross into Price County and it’s like crossing into East Berlin during the Cold War! No more gravel. No more groomed trail. Highway right off the trail. We were like — what the heck happened??? We rode into Price County for about a mile or so until the route was so ripped up and tracked that our tires were falling into the grooves and it got downright dangerous. If you’re going to ride this trail, leave from Medford. The only negative thing I can say about the Taylor County side of the Pine Line Trail is that there are no bathrooms along the way. There was a porta-potty in a Lions Club rustic campground near Chelsey. Saying it was ‘rustic’ is kind of a step up from what it actually was. The park was overgrown, there was one sad looking camper parked there and you kind of got the feeling that you just didn’t want to find out what may be living in the porta-potty or if you were brave and tried it, as you were sitting there the door might be flung open and some guy with a chain saw and mask might be there while your pants were down. Included some scenery shots and trail shots— as I said, a pretty little gem of a bike trail — until it wasn’t. The last 2 are the crossover into Price County.

We walked/hiked this trail for 15 miles. Thought the trail was well maintained. Our only complaint was there are no places to sit and rest. Did make suggestions to put some benches along the way but didn't get a response back.

We walked/hiked this trail for 15 miles. Thought the trail was well maintained. Our only complaint was there are no places to sit and rest. Did make suggestions to put some benches along the way but didn't get a response back.

it appears that the trail is NOT open to ATV travel except in the winter ?

all the reviews are very old:)

Give this trail a chance it’s not too bad nice and flat great for kids, awesome park a block into Medford at the beginning of the trail great places to dine in Ogama right off the trail, A few beautiful bridges going over a little nature area with plenty of beavers and wildlife of all sorts(we saw baby beaver it was adorable). I honestly only did the first 10 miles of the trail which only takes me a few miles out of Ogama, But once I complete the whole trail I will gladly review my review¿. Long story short give this simple flat trail a chance chance¿

This is a snowmobile trail masquerading as a bike trail

Started in Medford and rode North. The trail was great and as advertised (crushed limestone/granite) until Whittlesey. There were a couple of trees down (very recent) over the trail just out of Medford however I was able to carry my bike under and over them. The trail kind of deteriorates until Chelsea and then it is mostly not maintained with grass and weeds about 2' high and mud bogs (this has been an exceptionally wet year in WI from what I hear) for much of it. I was riding a mountain bike with knobby tires and was covered in mud by the time I got to Westboro. I don't think a smooth tired bike would make it. In a few places along the way people are cutting the grass and it is like you are riding across someone's lawn.

That said I had a great time. The trail to Westboro is away from Wisconsin HWY 13 and I saw no one except for deer, gold finches and one otter munching down a craw dad which was pretty cool as I had never seen an otter in the wild before.

So my wife drove to Westboro with the dog and the dog's trailer where we met up with the thought of riding to Prentice. I hooked the trailer to my bike and started riding. Very slow going and very low gears lots of muck. Keep to the center of the trail as there is poison ivy growing up to the very edges and you don't want to brush up against it.

We got to about mile 17.5+/- and there was about a foot of water over the trail. We threw in the towel and turned around. The section north of Westboro that we rode is adjacent to HWY 13 and was not at all peaceful with the logging trucks and other semi's blasting along next to the trail (kind of reminded me of the glacial drumlin trail between Dousman and Waukesha along HWY 18)

There are snowmobile clubs that advertising that they are maintaining the trail but probably not for bikes. All in all pretty cool from Medford to Westboro but pretty rustic from a rail-trail stand point. For what it is worth

The first 3 miles of the trail starting at Medford, WI were a solid 4 start for a non-asphalt trail. However, once the crushed limestone ended the trail quickly turned ugly. The trial was either 2 parallel ruts or lush green grass with no solid surface visible. I won't ride this trail again and would not recommend it to others until it receives some tender loving maintenance.

The bridge that was burned by arsons has been rebuilt. The trail is open with access to Prentice.

Nice level ride. Crushed gravel is fine from Medford to Whittlesey; it gets a little coarse after that. A trestle bridge is burnt out north of Ogema - so the trail ends before Prentice.