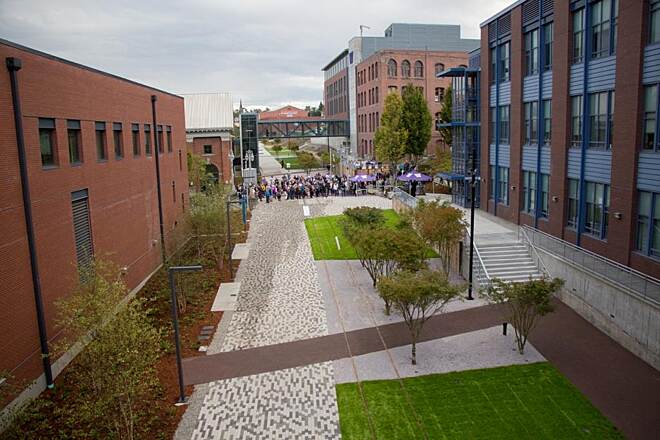 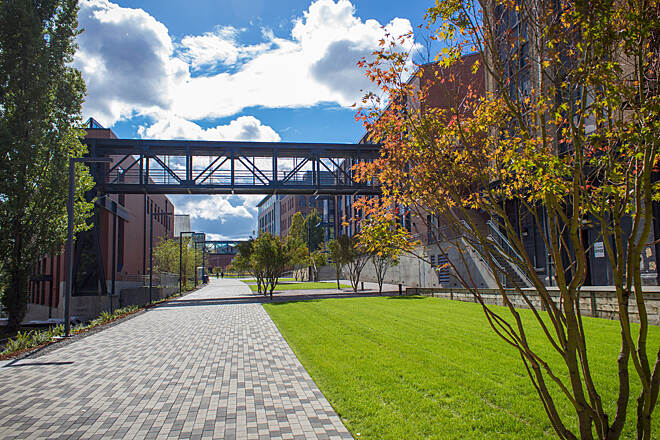 Tacoma's Prairie Line Trail follows the former Northern Pacific Railroad that was established here in 1873. Tacoma was the terminus of the rail line that stretched all the way to the Great Lakes.

The first of three phases of the trail opened in September 2014 and travels down the center of the University of Washington’s Tacoma campus. The trail is a beauty with a section of elegant gray-and-white brick. Ornamental trees, rain gardens, and other landscaping add to the trail's visual appeal.

In 2017, another short section opened that extended the trail farther south to S. 25th Street and into the Brewery District. Eventually, the rail-trail will extend to the Museum District, the Thea Foss Waterway Esplanade, and the Water Ditch Trail.

The trail includes interpretative signage on the area's history and several pieces of public art. At its north end, across from the Tacoma Art Museum, trail goers will see “Shipment to China” by Hai Ying Wu; the sculpture includes a 1909 railroad car and dozens of bronze boxes that bear the names of Chinese workers who helped build the Northern Pacific Railroad. Farther south, a 13,000-square-foot trailside mural "Working Forward, Weaving Anew," created by a team of Native American artists, shows scenes of handicraft, including basket weaving and furniture building.

As a retiree of the City of Tacoma who worked there at "The Barn" (aka Street Maintenance Shops) at S.24th & C St for 30 years, this railroad track and the crossing on S.23rd & S.25th (then equipped with not-very-effective Wig-Wag signals) were a daily part of life working there, as the tracks basically cut the City's property in half. The "Upper Yard" as it was known was where the City parked a lot of their heavy equipment, dump trucks as well as their supply of salt & sand for winter treatment of the streets. They own the whole parcel from 23rd to 25th streets on the north & south and from the railroad tracks to Jefferson Street east and west.
Anyway, we've seen everything there from a train trying to go up this grade pulling too many cars and stalling out and blocking every crossing between the main line and where they stalled out Pacific Avenue included, to one time where a box car got away from the crew trying to spot it near Atlas Foundry and this thing rolled all the way down the hill, past the barn where they figured it was traveling nearly 70 mph during daytime hours all the way down the line crossing Pacific Avenue and finally derailing near their main line, unbelievably all without hitting anything. That was front page news in the Tacoma paper. The railroad spokesman said they were extremely lucky that nobody was hurt or killed.
This line was the way the trains got out to South Tacoma, Lakewood and Ft Lewis and were switched onto this track down by the grain terminal on Schuster Park Way. Now since the new light rail line coming from Freighthouse Square heading at first west then south, crossing Pacific Avenue with a new bridge that ties in to this old line, it has essentially cut off what they now bill as the Prairie Line Trail from it's historic roots. You can see what they've done traveling down South Tacoma Way from S. M Street towards Pacific Avenue. It's completely upgraded with brand new ties, rails etc and goes straight to Freighthouse Square. Whereas before, it came about halfway down the gulch before turning northwest and going past what I described above and heading towards their mainline switch.
So while this now is a very attractive addition to the college district there near S.21st and Jefferson, I don't know what they plan on doing to connect this trail to any others, as the south end dead ends at their new light rail line off of South Tacoma Way just a couple of blocks away. And the other end dead ends at the Burlington Northern-Santa Fe main line down by 4th & Dock Street, though they'll probably try and tie that into their Ruston Way waterfront trail that's very attractive & popular in it's own right.
Along with all the other trails in Tacoma this one was well thought out, well maintained and actively used and is a true asset for the downtown area that it goes through. As a true Rails To Trails type project this one should be a poster child on how to do something like this RIGHT and all involved should be proud of what they are accomplishing here. It's definitely not one their largest endeavours (about a mile long when complete) but when it's done it could be one of the best.