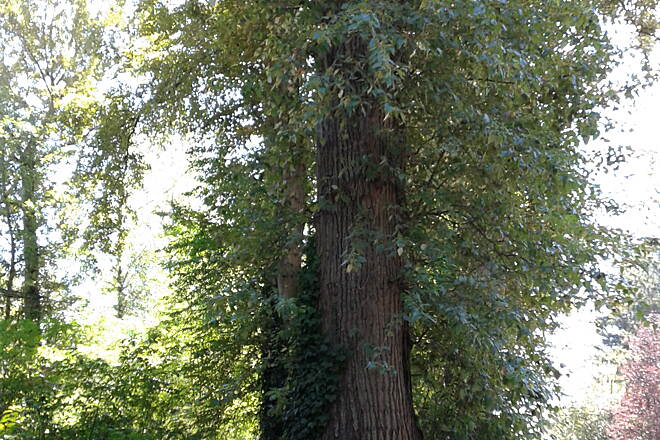 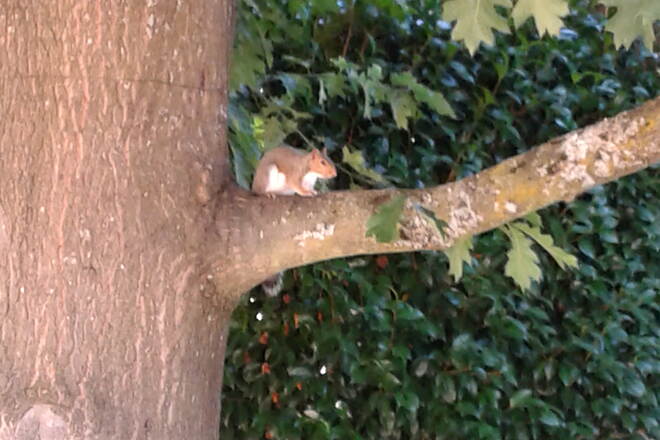 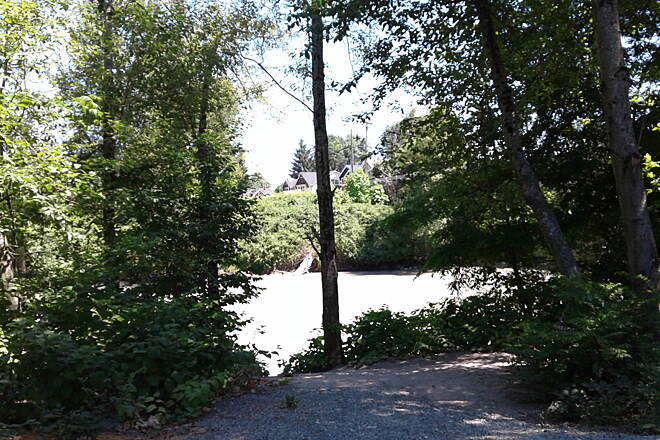 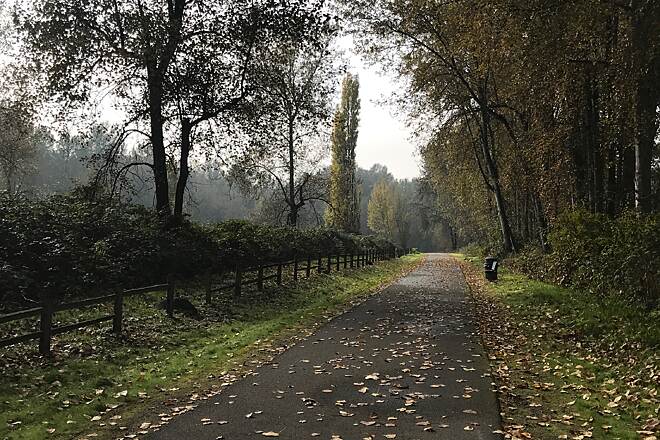 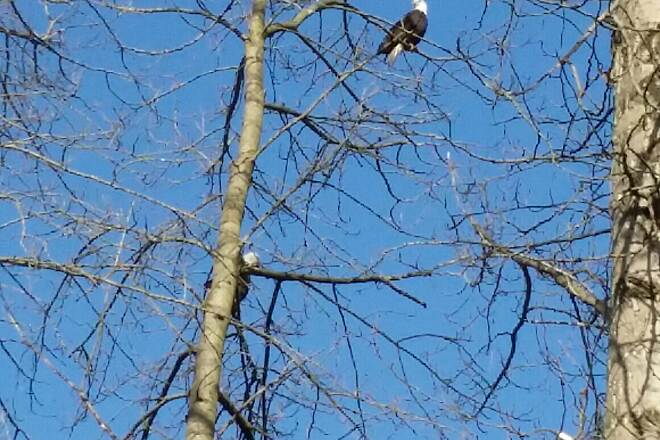 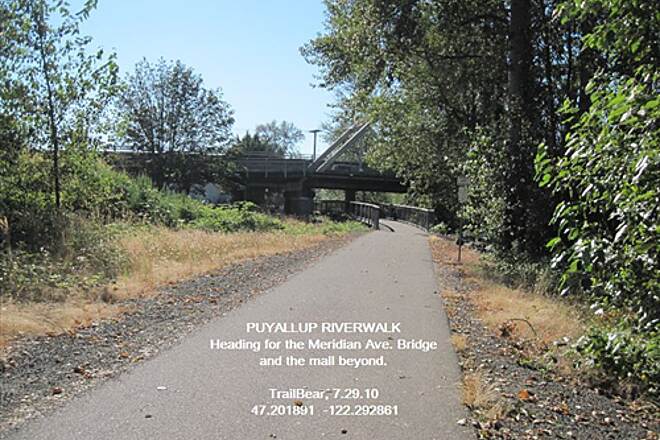 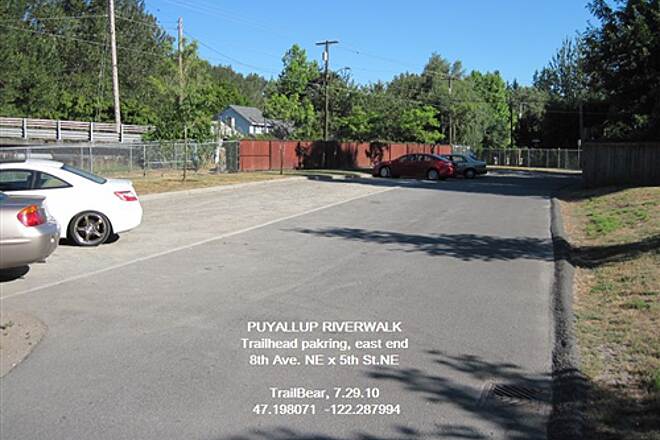 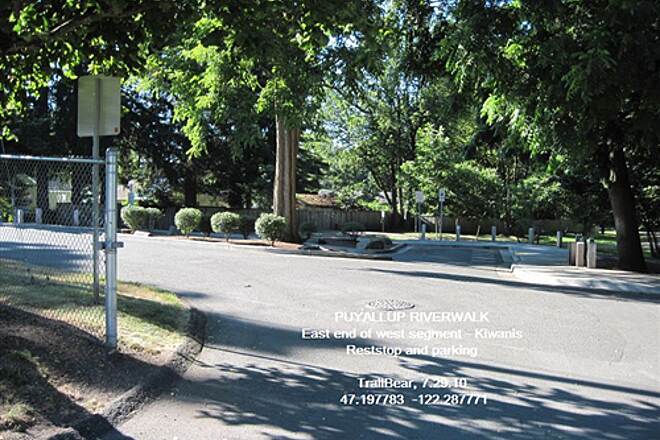 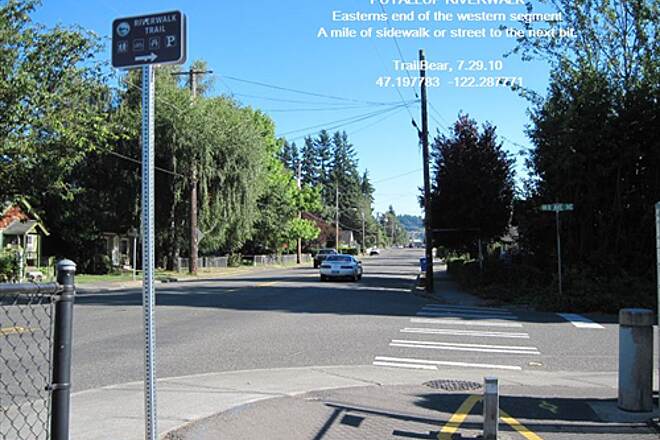 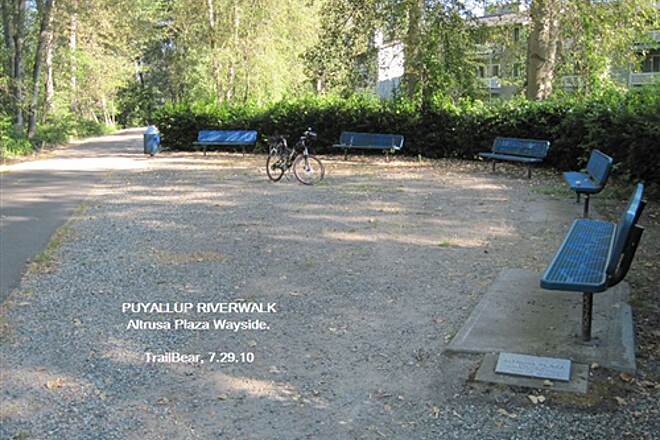 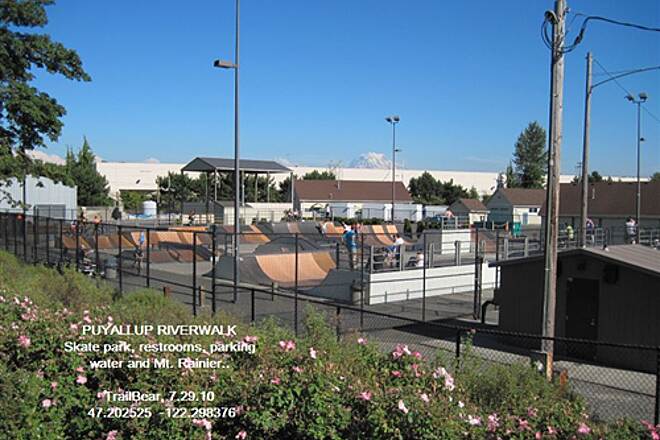 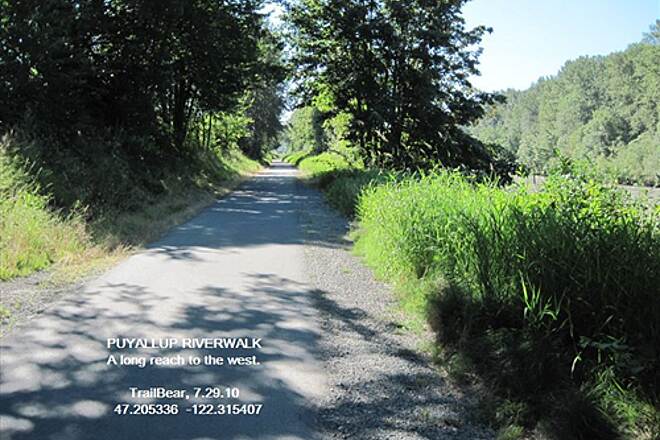 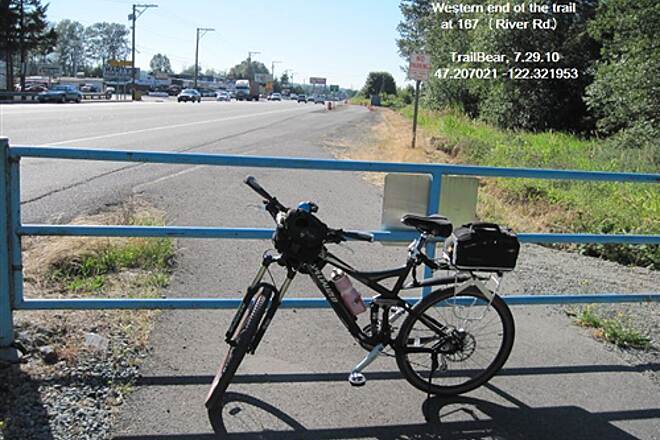 View Trail Map Send to App
The Puyallup Riverwalk Trail traces the tree-lined shoreline in northern Puyallup, a few miles southeast of Tacoma. The paved pathway consists of two completed segments with about a mile of residential roadway and sidewalks in between. As you travel alongside River Road, you'll catch glimpses of the water on one side and commercial areas on the other. A mall at the Meridian Avenue crossing offers places to stop and eat.

The trail ends on the outskirts of Sumner. From here, the adventurous can continue their journey on the Foothills Trail. From the Riverwalk's eastern-most endpoint, cross under Main Avenue and go south on 134th Avenue through rural landscapes for about 1 mile to make the connection just off 80th Street. The scenic rail-trail stretches about 15 miles through the towns of Alderton, Orting and South Prairie.

Parking is available at several points along the trail, including Puyallup Skate Park (1299 4th Street NW), the shopping area at the intersection of River Road and Meridian Avenue and the lot at River Road and 11th Street NW.

The trail walk is a beautiful experience. Most of it goes along the Puyallup river and you can walk, run, bike or skate on the concrete path. There are benches along the way to rest or just watch the scenery. The trees are gorgeous and it's lovely to see the wildlife and wildflowers. It's handicapped accessible.

Parked near the skateboard park on 4th and headed west on my bike. Before I left I went to use the bathroom but it was occupied by a vagrant. Saw a couple of bums/druggies along the way. Met a police car coming down the trail so there is a police presence. Turn around at the west end and headed east. Very nice views of the river. Managed to use the bathroom at the veterans park, met the attendant as she had just cleaned it. To go to the east you have to leave the trail for a short while but it's well signposted. Got to the east end and turn around to go back. This time I made a mistake and ended on Main Street which was ok because I found The British Bites tea shop I wanted to try. Rode back to the west and then back to the skatepark. 10 miles altogether, nice ride. Trails in great shape.

Being a local, I've walked the entire length more than once but I've enjoyed doing segments too. Today I parked in the parking area beneath SR-512 just off East Main and went east to the trail's end at Mama Stortini's which is 1.6 EASY miles each way. It's along the river the entire way with plenty to see. Even on warm days this is a great walk as most of it is in the shade of the huge cottonwood trees all along the trail. It's in good shape and they keep the sides trimmed up from the blackberry bushes & brush that thrive in the area as well. I saw inline skates, skate boards along with plenty of bikes, so the trail is smooth enough for whatever you feel like riding or wearing. That's the Burlington Northern - Santa Fe mainline across from Mama's and the trail ends just about right underneath that railroad bridge, with a rhubarb farm (just look at that FERTILE valley soil there) just past that rail bridge. There's over 60 trains a day that pass by there so (BE CAREFUL and) if you're a railfan there's another reason to make this walk. I also saw a fish trap that's anchored into the river's current just upriver from Mama's with an interesting sign explaining how that thing works and the reason it's there.
Last time, a week ago or so we walked, we parked at Fred Meyers at Meridian & River Road which I realize you're probably really not supposed to do. But I shop here often and that parking lot is huge. So there's ALWAYS plenty of room and I have NEVER heard of them towing any trail walker's vehicles EVER. (How would they know? And if you're worried about it go buy something. Their restrooms are clean too..) HOWEVER (as of 6/1/2015) they are well along in the process of building a new bridge that crosses the river there on Meridian and they are using the Fred Meyer parking lot behind the store near the garden center there out back by this trail, TO STORE MANY, MANY full sized containers that (I was told) hold the new pieces of the new bridge deck they are getting ready to lay. SO...there's VERY LITTLE PARKING by the trail behind Fred Meyers due to construction and all of these containers they're storing and using there. Anyway, once I parked in the main lot, I walked west all the way to the trail's end close to where the old weigh station used to be on River Road. And again this segment of the trail is nice and flat and in great shape as well. Just west of Fred's there's a rest room and limited parking there for access too. All in all this really is a nice trail and the City of Puyallup should be proud of and has done an excellent job with signage, access & maintenance on this popular and well used public trail. And we look forward to when this trail will be connected to the Foothills & Sumner Link Trail(s) to the east as well as going all the way into Tacoma to the west. Thumbs up!!

Approach/Parking:
Along the western end of the trail, it travels between River Rd and the Puyallup river. The River Road trail-head does not have any marked parking, it shares space with a pull-off for a truck scale. Approaching this end of the trail via bicycle along River Road is OK, there's a paved right-of way on River Rd, but it's not particularly wide on the North side of the road, and there are intersections and businesses on the South side of the road (plus you then have to cross a busy 4-lane highway to reach the trail). Towards the West end of the trail there are side street with parking, as well as a Fred Meyer (no idea what their policy is on parking there to bike, but it appears some people do). In Puyallup, there's a gap in the trail with some parking at both ends of the gap as well as parking (decent lot plus on-street) at the East end of the trail.

Views/Connections (West to East):
From the West, it's pretty much River Rd. As mentioned this is OK. Views are decent. One side is the river, other side does have businesses/farms (not necessarily scenic ones) in the foreground and great Rainier views in the background on clear days. The mountain is effectively hidden from view once on the trail. There are spots to pull off for views of the river, which remains near the trail on one side. The other side is not as scenic. Several places there are Trees, a Berm/Levee, businesses and homes. Before you reach Puyallup it is still enjoyable from an ambiance perspective. As you reach Puyallup, there's a Fred Meyer, as well as bar next-to the trail (good refueling spot for those on longer rides). The Bike Rack at Fred Meyer is at the far end of the entrance, which does strike me as a little strange given the proximity to the trail. Up until the gap, you're pretty much in town with houses on one side and the river on the other. There is a gap with signage to reach the other portion of the trail. Overall I've never encountered significant traffic, so I would consider the gap to be reasonable. After the gap, even though the trail is in town, it is well isolated with river on one side and trees on the other.
The eastern portion of the trail continues East to East Main Street. Across the bridge on East Main can get you to the White River Trail (approx 1/8 mile on road), or go Under East Main to connect to the Foothills trail (one mile on road). There's also a gravel surface trail that continues along the river but I've never ridden it. There is a nice view of Mt. Rainier at the East end of the trail (after passing under E. Main).

Trail conditions:
They appear to still be working on portions, so condition is overall quite good. Not much elevation change, so it's a reasonably easy ride.