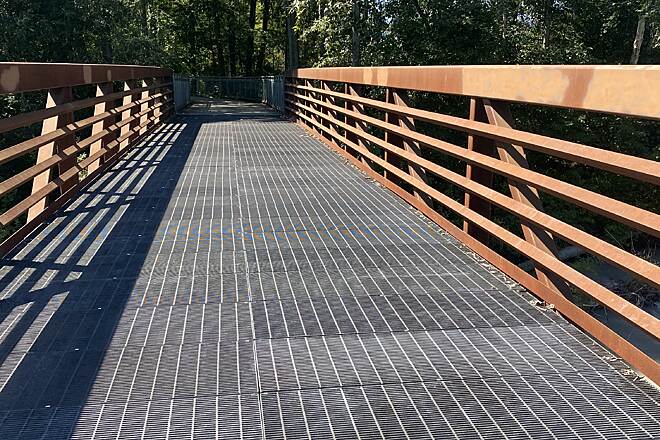 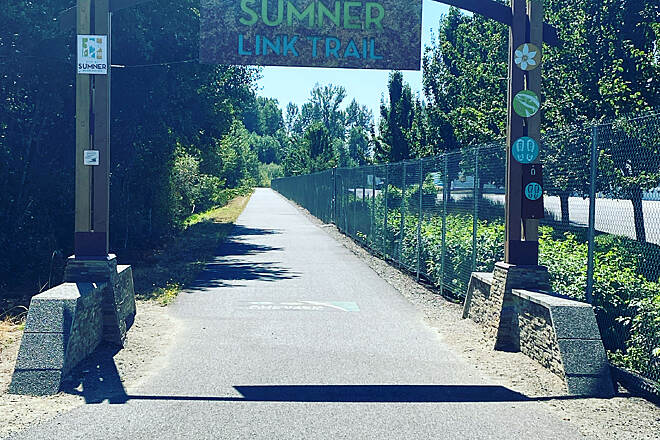 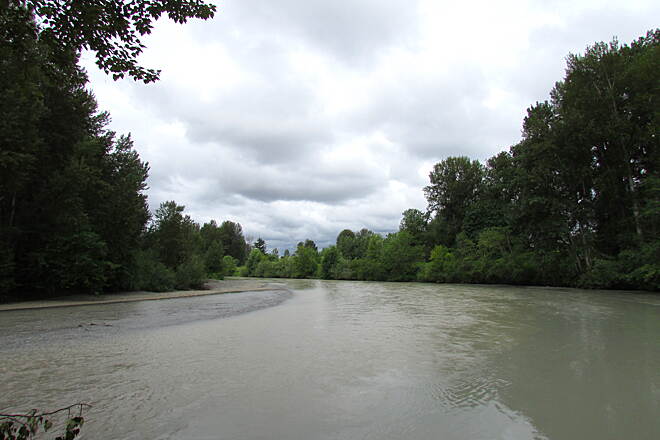 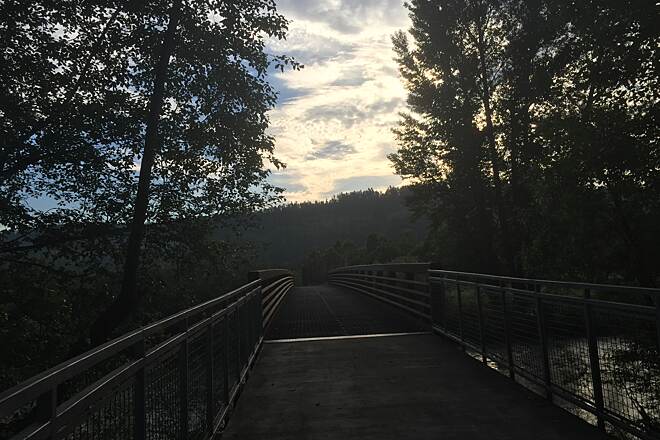 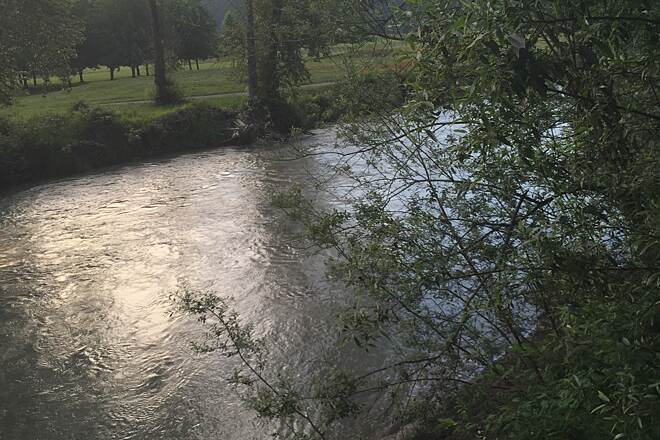 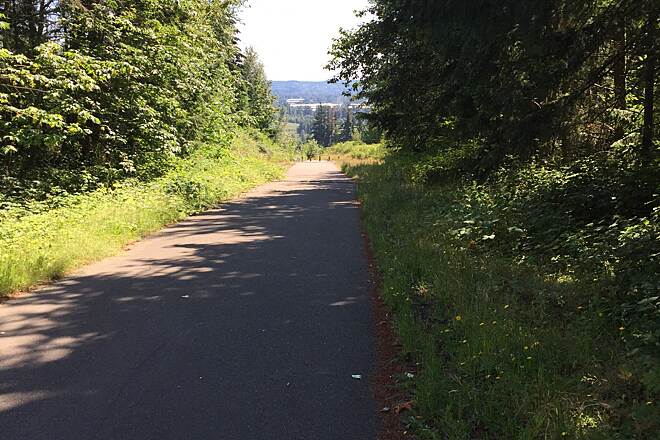 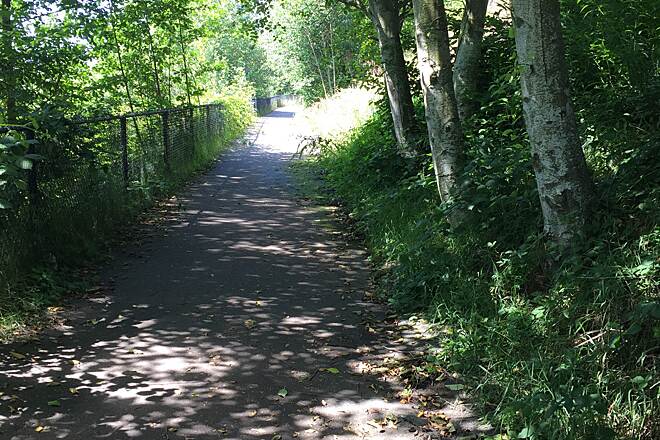 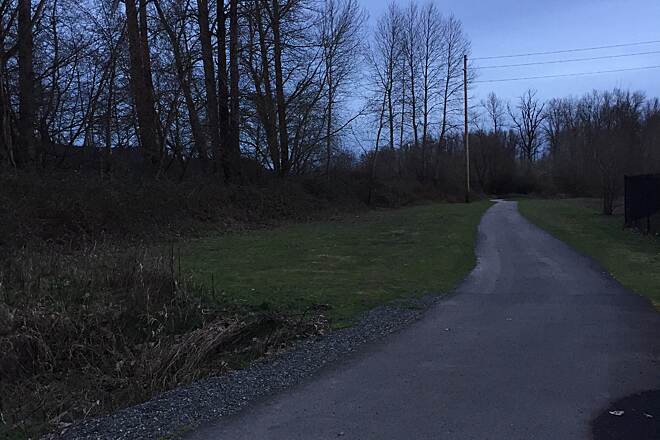 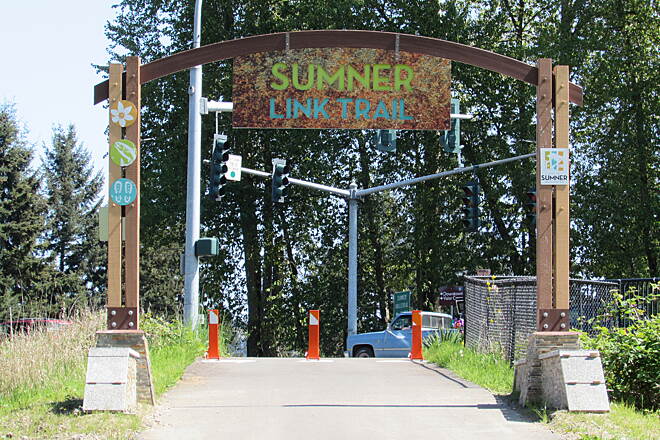 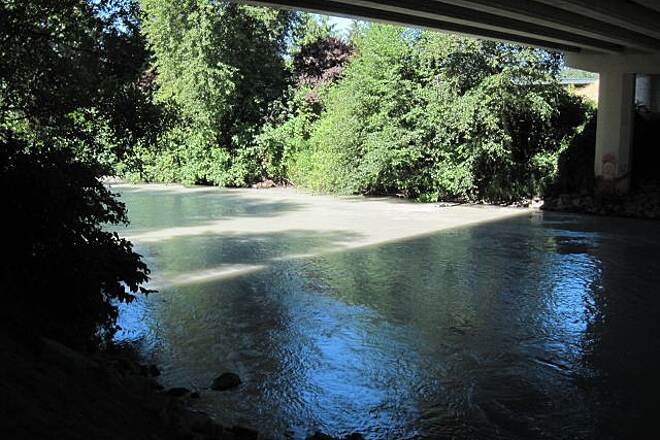 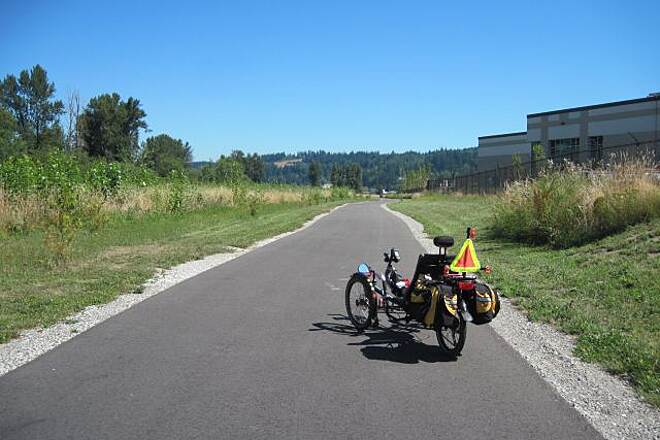 Sumner Link Trail provides an important connection between the Interurban Trail and the Puyallup Riverwalk Trail. Along the way, the trail follows the White River, offering views of the water, meadows, and farm fields. Note that a portion of the route—along Fryar Avenue—is on-road.

The trails are well maintained. You'll see more people walking than bike riding. Surrounded by farm land, warehouses. Two bridges that go over the river. I found a side trail that leads to a closed down golf course. It has some paved trails as well. It has pond, I saw some kids catching some fish.
Descent trail, it's an easy bike ride. If you enjoy walking, it's perfect.

We rode the entire trail out and back starting near the intersection of SR410 off of East Main Street. The trail is paved but many sections are in poor condition. Some of the asphalt has bumps created by tree roots. These sections are marked by yellow paint lines but one has to wonder why the city doesn’t fix the trail. On other sections, overhanging trees and prickly berry bushes encroach on the trail. During our ride, it was obvious that the edges of the trail were recently mowed. However the debris from the trimmings was left on the trail instead of being cleaned up. It was a mess.

The most annoying aspect was the trail is poorly marked in some sections. How hard is it to put a directional sign to let you know which direction to ride? Also, the trail is not contiguous. Once in the town of Sumner, you must cycle for several blocks along a busy truck route before picking up the trail again.

For the most part, the trail primarily goes through industrial areas along with some open fields, woods, and neighborhoods. The trail was OK and an interesting way to see a part of the city you wouldn’t normally see. There were some benches along the trail and one or two bathrooms.

My first visit to the Sumner Link Trail took place on July 21, 2015. I rode almost all the trail on a recumbent tricycle. I determined where to park (away from downtown) in a two-stage process: 1) used the City of Sumner's on-line map to identify the general location of the trail and parking lots and 2) followed up with detailed study with Google Earth to form a mental map of how to get there. I chose the access point at the end of 16th Street East.

From the 16th Street access I rode to the north end of the trail (Stewart Street), then south almost to the south end of the trail, and back to 16th. At the north end is a grandiose portal that I liked a lot---all trails should have them---but it seemed out of place abutting a busy street. At the south end I stopped immediately west of the East Main Street bridge. I did not follow the trail farther south (I did not cross the bridge). I saw about a few cyclists, a few walkers, and two dozen geese. The problems I encountered were intruding vegetation (mostly berry vines), many asphalt upheavals, a few cracks in the asphalt, poor signage, and (downtown) route confusion and heavy traffic. A Sumner Planning Department sign at the 24th Street bridge explains the City's plan to replace that pedestrian bridge with a street bridge having a bike lane. The boards of the bridge made a pleasant chirping sound as I rode over them.

Overall trail length is about 5.3 miles and it is completely paved. The north end is at busy Stewart Street (no parking!). The south end (according to the on-line map but not confirmed in person) is the south end of the East Main Avenue bridge that spans the Puyallup River. About 80% (four miles) of the route is on dedicated alignments. The rest is a combination of bike lanes, sidewalks, and traffic lanes on streets. Scenery is varied: farming fields, woods, rivers, warehouses, busy city streets, and a quiet residential neighborhood.

In several places, notably near cottonwoods, the asphalt has bumps created by tree roots but they are well-marked with yellow paint. (Why doesn't the City of Sumner run a grinder over them or remove the roots or build trails better?)

The City's on-line map needs a lot of work. In the area where one needs navigation help the most---downtown---the map is next to worthless, suffering from a lack of detail. The city's website doesn't mention that in the built-up part of the city the trail uses bike lanes, traffic lanes, and sidewalks. Signage along the route is inadequate: the route is poorly marked, especially downtown. It, too, says nothing about the use of streets and sidewalks. Like other trails in the Kent Valley, it suffers from a lack of orienting signs (street names and directions to landmarks or institutions).

I rode this trail earlier this week. It was a nice trail seemed brand new. Nice information signs along it. New bridges etc.. Places to picnic and even some bbq pits in Sumner. The only draw back is the section from the Interburban trail to this trail along 8th Ave is treacherous. Narrow busy roads for about 3 blocks. Hopefully they link the 2 soon.

Has anyone seen the Sumner Link Trail?

I couldn't find it though I may have...seen it.
As I'm a frequent walker in Puyallup, Tacoma and everywhere there may be a good walking trail I was rather excited to be going to Sumner today to check out their Sumner Link Trail. Coming down Shaw Road and then into Sumner from that direction, I was keeping a keen eye for signage that might direct me to the nearest trail head where I could park. Of course I pulled up the map on the website before leaving home but being sort of drawn out instead of just using something easy like Google Maps, that did NOTHING and was NO HELP at all except to confuse the issue (and I'm a map reader familiar with all aspects of reading maps, unlike some folks). Oh well, I thought, I'm sure they have good signage pointing the way, after all the City of Sumner online seems rather proud of this accomplishment. So proceeding towards Sumner after getting off the new Shaw Road exchange there at East Main in Puyallup, I was keeping an eye out for any kind of sign that would point out the trail, a trail head, a parking area, ANYTHING and so it went. Until I remembered from that confusing online map that State Street in Sumner went to the trail head where the street ends, I was so intent on finding (according to that drawn out & confusing map on Sumner's city website). So off Traffic Ave onto State Street and heading towards the river I go and still looking for those elusive signs that every other city seems so intent on posting, especially for a POPULAR place to walk along the river. I wind up all the way to the end of State Street and I'm guessing as to what I've stumbled on here - parking places for some kind of business that's situated here or is this parking for the treatment plant employees or is this the parking lot for their river walk?? I can't tell because ALL the parking places are taken (this was around noon-thirty on Tuesday), there's a garbage truck doing something there and it still looks like some kind of business parking with a worker also doing something with his dog tied up to his work van (I think). So it's off I go, still looking for Sumner's Link Trail that's supposed to be by the river...somewhere. Obviously it wasn't here at this location. So it's back to Traffic Ave and still looking for the signs that I'm sure should be there pointing out this somewhat "hidden gem of a trail" at least here in Sumner, I go. So I get to where the street crosses the river by The Riverside Tavern and that famous furniture store and I haven't seen anything that might point the way or even mention this River Link Trail in this area or whatever they call it, even though I did manage to find the river. Anyway about this time my patience was wearing very thin, so knowing the area a lot better where I came from, I just headed back to Puyallup on the side of the river where they remembered to install something as important as a sign that not only points to the attraction itself (where to park at the trail head for instance) it mentions the trail itself in numerous and outstanding locations all along the trail itself throughout the city. What happened in Sumner?
So if anyone finds a better map using old technology like Google Maps and can get the Sumner city people to change over to a map a stranger can read and figure out AND INSTALL A FEW MORE SIGNS THROUGHOUT THEIR CITY pointing this "hidden (literally) gem of a trail" I'll be glad to support the cities and to stick to walking in places that do. And right now and in my not so humble opinion, the city of Sumner has some work left to do and a lot more signs to install before I'd rate this trail anything except MARGINAL - and until that's accomplished that's as close to a compliment for this trail as they'll get out of me.

I walked this trail for the first time today. I didn't walk the entire trail, I will do that next week. It is brand new with beautiful bridges over the river. I walked down the Lakeland Hills trail to access the trail. Wonderful addition to trails in Washington State.