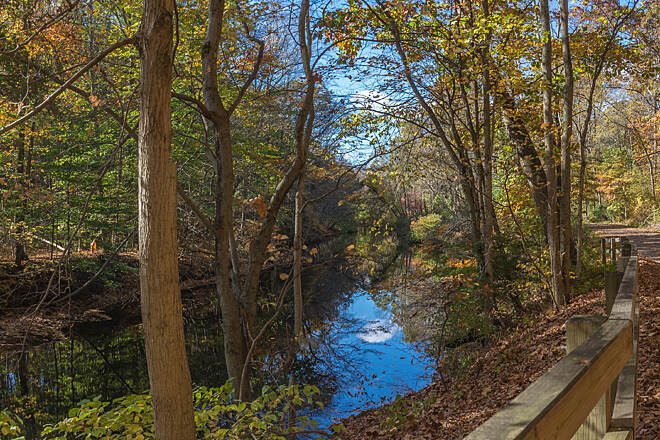 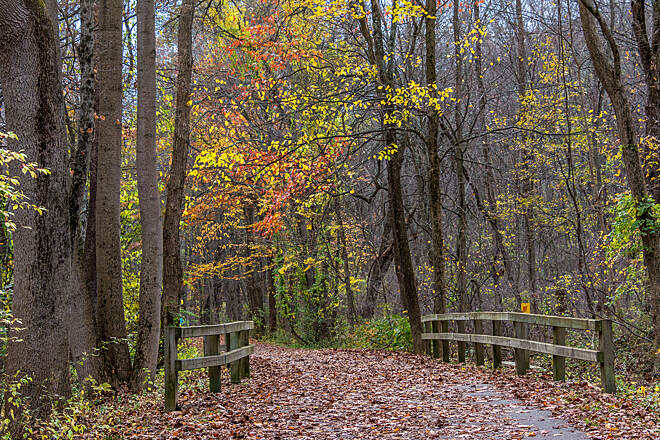 The Quinnipiac River Gorge Trail is a 1.3-mile rail-trail in Meridan, Connecticut. The trail occupies the former railbed of the Meriden, Waterbury & Connecticut River Railroad, a 17-mile line which was used to transport manufactured goods up to the Connecticut River. The railroad was abandoned in 1929, 41 years after it opened due to a lack of money to run it. The history of heavy industry and the urban development that came along with it took a heavy toll on the river’s health. Efforts have been made to rehabilitate the Quinnipiac and restore the riverine habitats that hosted a diversity of fish, birds and wildlife.

The River Gorge Trail begins on Oregon Road, at the parking area near the 78-ft Red Bridge. The bridge serves up scenic views of the river but there are other viewing and fishing spots as you travel along the trail. The entrance is marked by two granite columns. From there, the trail follows the river as it heads northwest and then bends south to end on Finch Road near the Meriden/ Cheshire boundary. The trail is heavily wooded, and the trees surrounding it especially stand out in their fall colors. Mile markers are placed every quarter mile, and interpretive signage has been provided to illuminate the history of the river and the railroad.

Park at the parking lot on the corner of Oregon Road and River Road, then cross the Red Bridge to the trail (101-107, Wallingford,). There’s accessible parking across the river on Oregon Road, right at the start of the trail.

Just north of that, still on Oregon Road, is another parking lot on the right, at the Hanover Pond Trail trailhead.

There's also a small parking lot at the West end of the trail on Finch Avenue (771 Finch Avenue).

I have trouble with my legs and was able to complete this walk. There are benches along the way. The trail is wide and paved.

I have trouble with my legs and was able to complete this walk. There are benches along the way. The trail is wide and paved.