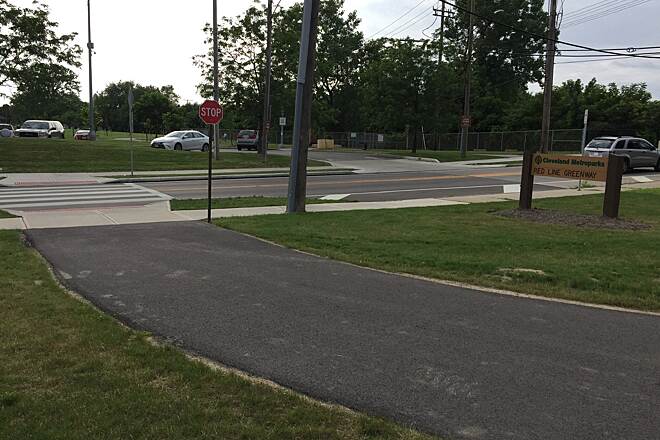 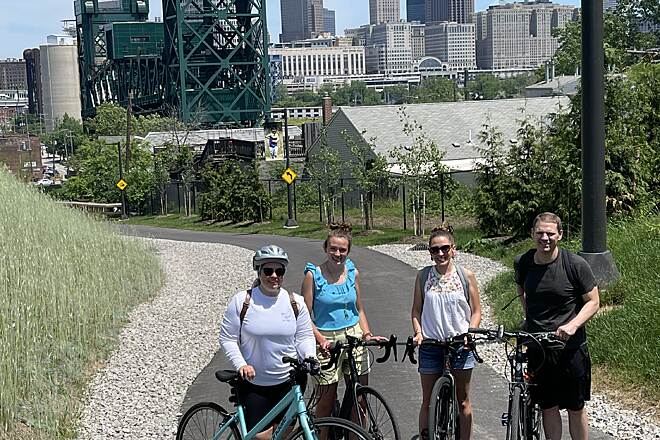 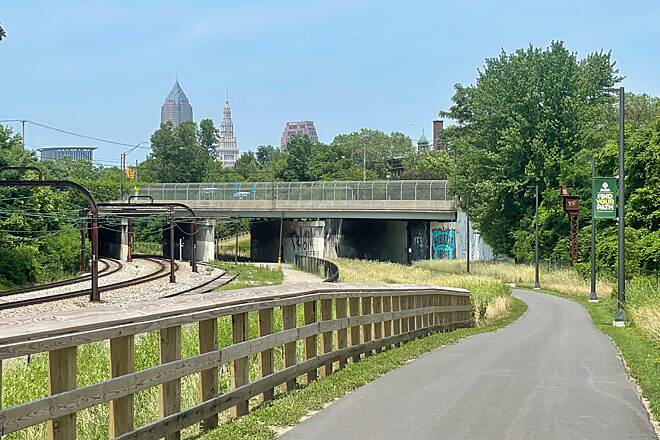 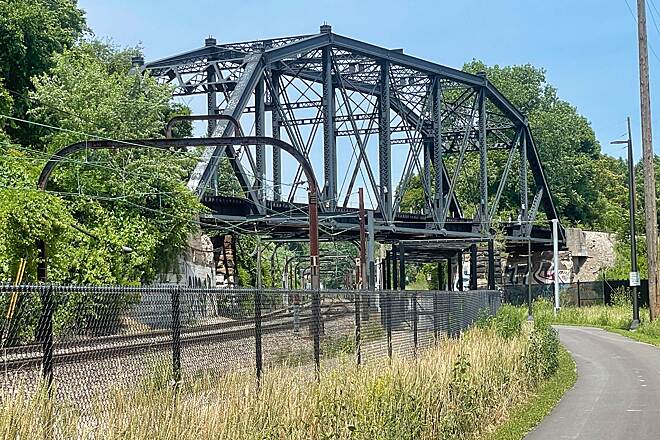 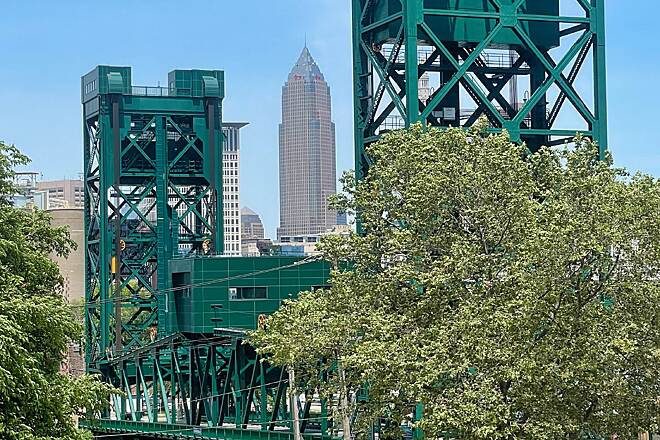 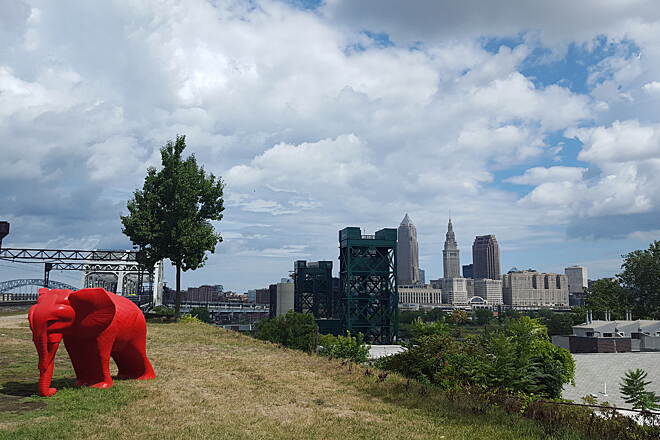 Cleveland's latest link in the city's growing trail network is the Red Line Greenway, a two-mile rail-with-trail project that opened to the public in May 2021. The trail runs along the tracks of the Cleveland RTA Red Line, taking trail users along the rail corridor from the Michael Zone Recreation Center in the west to a connection with the Cleveland Foundation Centennial Trail to the northeast.

The Red Line Greenway offers a smooth asphalt path, with a well-lit route that features pleasant natural landscaping and native trees, helping to give the trail more of a scenic feel despite its urban location. The trail runs through a number of Cleveland neighborhoods, providing local residents with a useful pathway to help navigate the barriers formed by the railroad tracks and the nearby interstate, making the trail an important, safe off-road connection.

The result of years of work from the city and local volunteers to help clear the corridor for its new use, the Red Line Greenway should provide residents with a pleasant recreation pathway and a useful transportation route for years to come.

The trail is also of course very accessible from the RTA Red Line train system, with the stops at West 25th/Ohio City and West 65th-Lorain offering nearby connections to the trail.

Nice connector to the river and lake loop

Nice new trail that makes it easy to connect to the new bridge out to Whiskey Island. Need to do a little road riding on low traffic streets down in The Flats. Look for the Centennial Trail under the Detroit-Superior bridge. Be sure to checkout the old Coast Guard Station at the mouth of the river, then head west on the new Whiskey Island Trail to Edgewater Park. Head back East on the Lakefront Bikeway to W28th, Church, W25th and Franklin back to the Red Line at Hoopples. Only busy part is about 100ft on W25th with a nice sidewalk.

About 20 car parking lot on W53rd at dog park. See photo. Two police cameras mounted on pole at lot. Not sure if that’s a good or bad thing.

I loved the loop. Some great views of downtown and the lake. Lots of boats to watch on the river during the summer. Enjoy…..bikin-mike

Another Important Link in the Growing Cleveland Trail Network

The Red Line Greenway is a new bike trail in Cleveland, Ohio that opened earlier this Spring. My ride on this trail was part of a larger loop ride I took while in downtown Cleveland. The Red Line Greenway runs from Hoopples Sports Bar, which is across the Cuyahoga River from Rivergate Park in the Flats, out to the Michael J. Zone Recreation Center at West 65th Street and Lorain Avenue. The trail parallels Cleveland’s Red Line Rapid Transit light rail corridor that runs from downtown out to Cleveland Hopkins Airport on the city's westside. The greenway utilizes the former right-of-way along the Red Line to break decades-long transportation barriers, such as freeways and rail lines, that have hindered resident access to and from downtown. In addition, the plan is to provide this linear urban trail with areas where families can pull off for recreation, picnicking, and other activities. At present, there is not a lot to see along the trail other than the rail lines, and the destination points at either end -- the Michael J. Zone Recreation Center & Rivergate Park. Riding to the northeast end of the trail provides connections to the Cleveland Foundation Centennial Lake Link Trail, the Ohio & Erie Canal Towpath Trail and the developing Canal Basin Park. When the planned Irishtown Bend Park project is completed in a few years, there will be even more incentive for people in the Detroit-Shoreway and Ashbury Towers neighborhoods to head downtown. This Cleveland Metroparks trail is definitely one to keep an eye on in the coming years.

I’ve been on this new stretch twice now and I thoroughly enjoy it. Although only two miles, it will take you to other trail connections near downtown Cleveland.