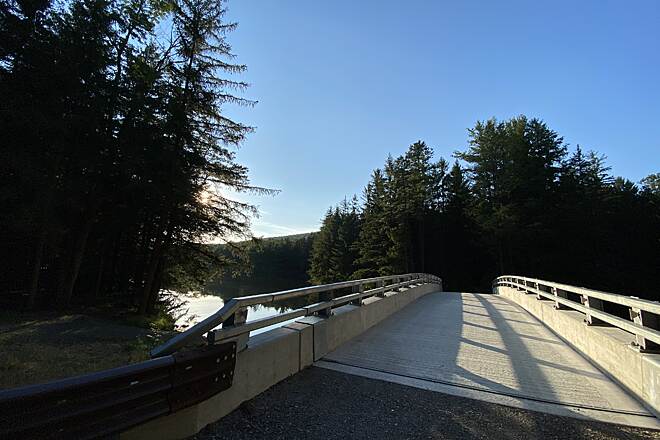 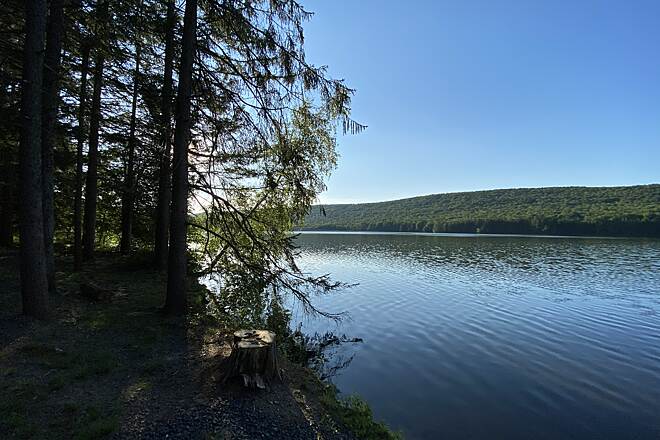 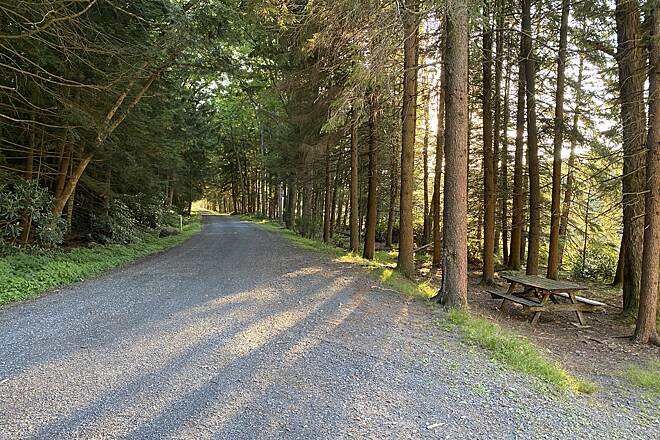 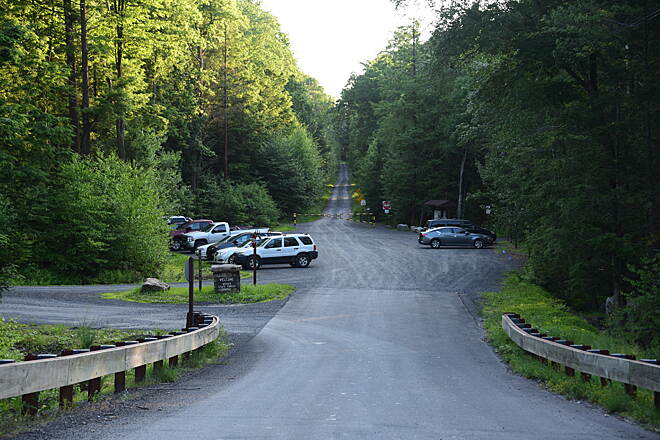 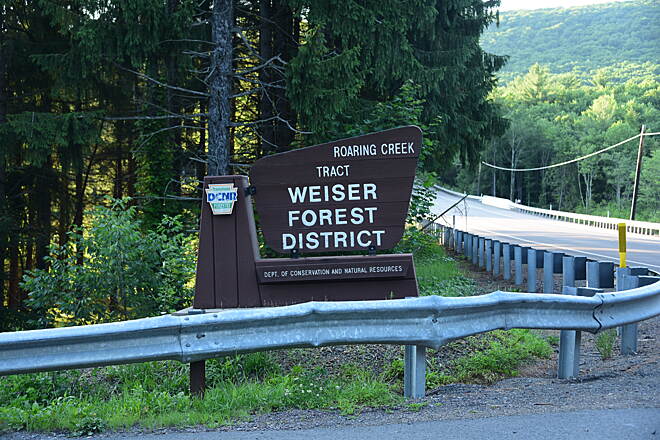 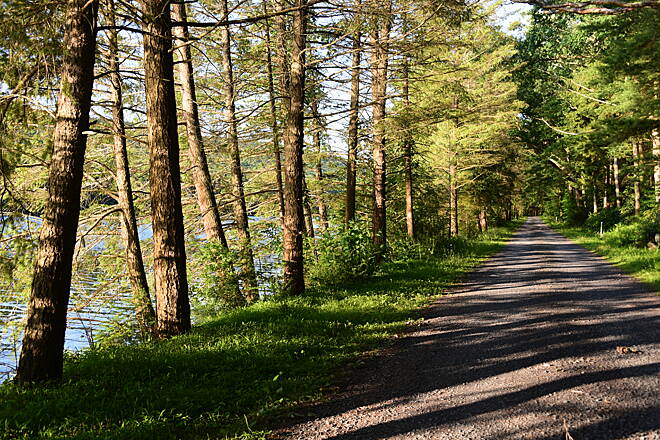 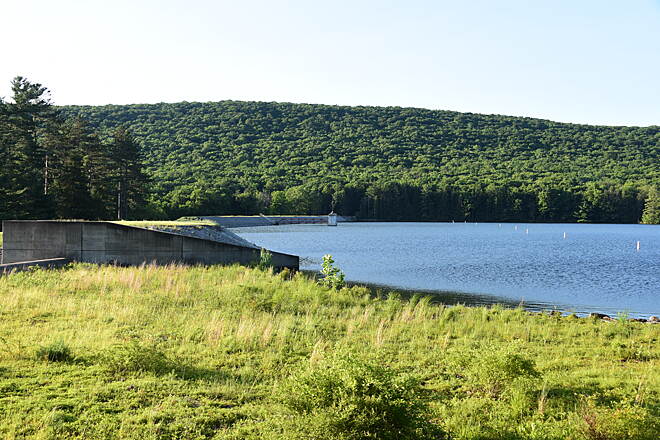 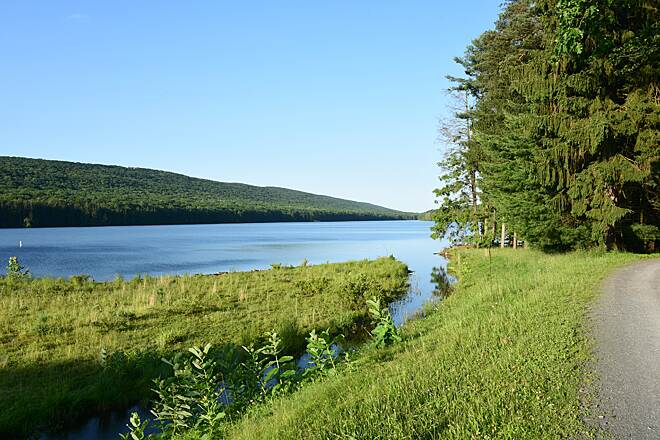 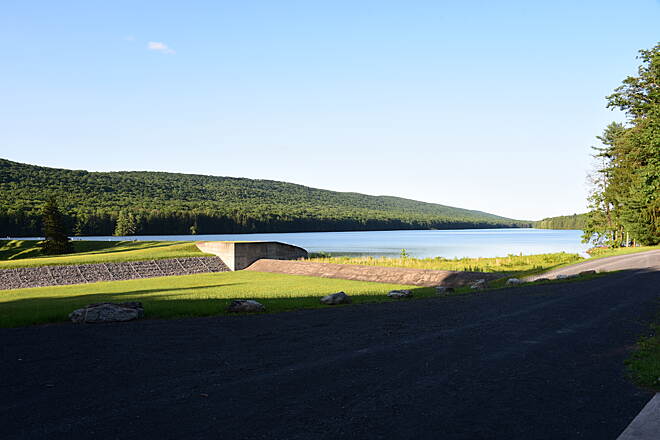 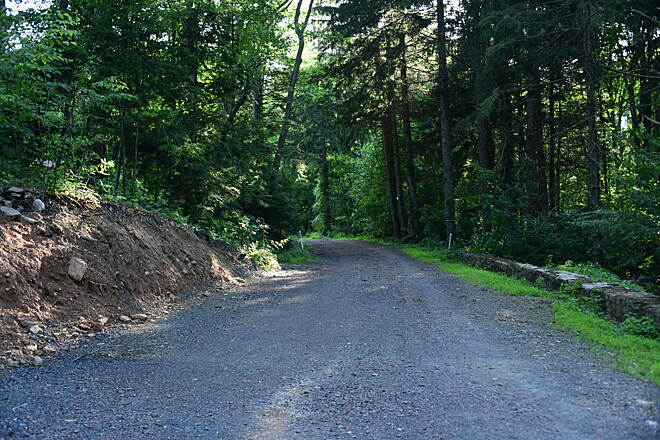 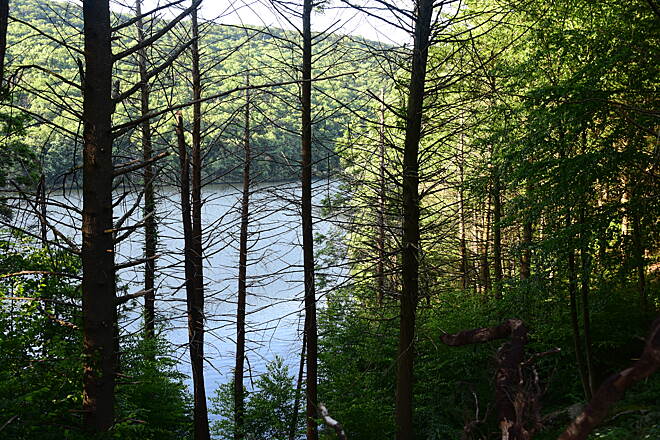 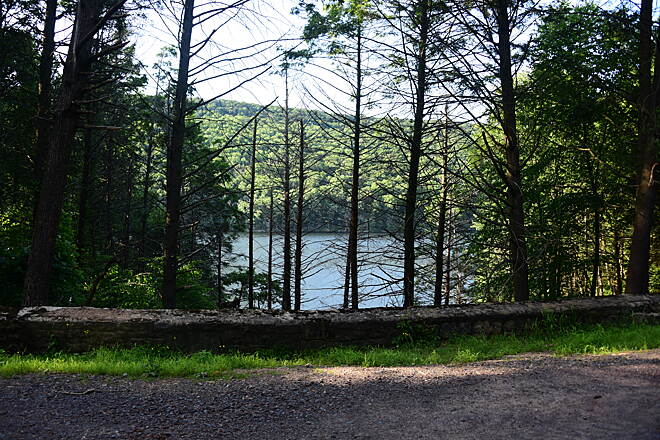 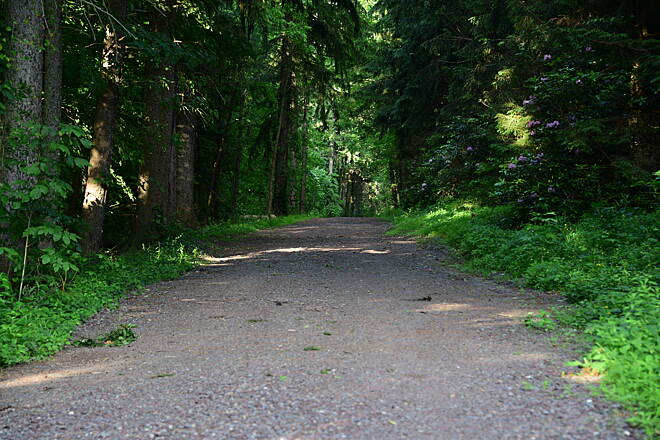 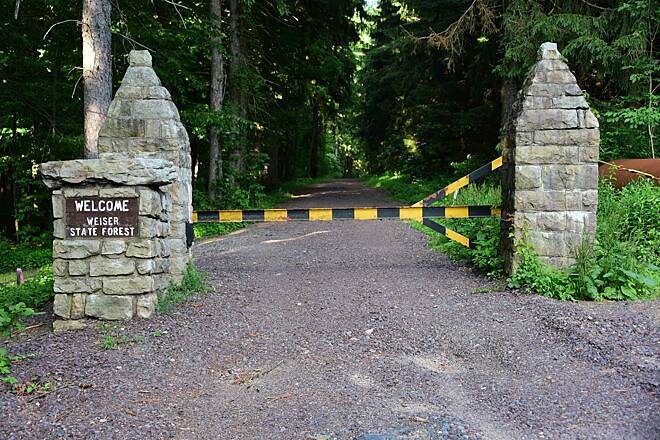 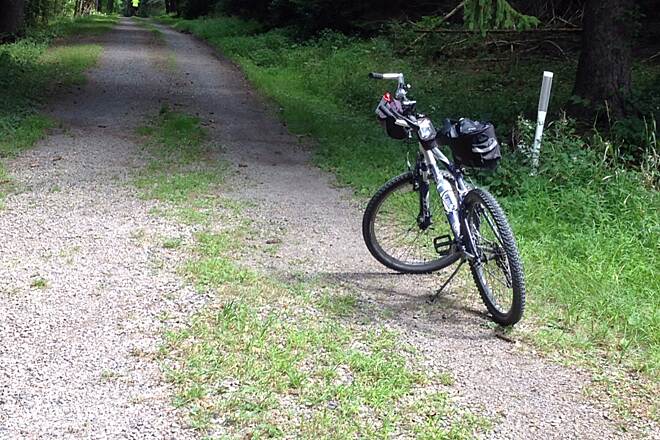 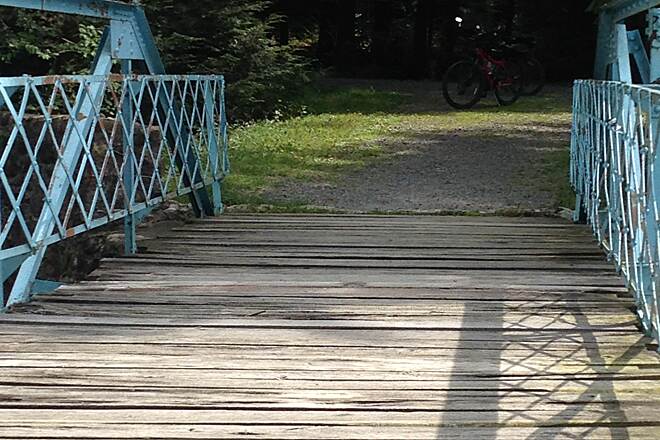 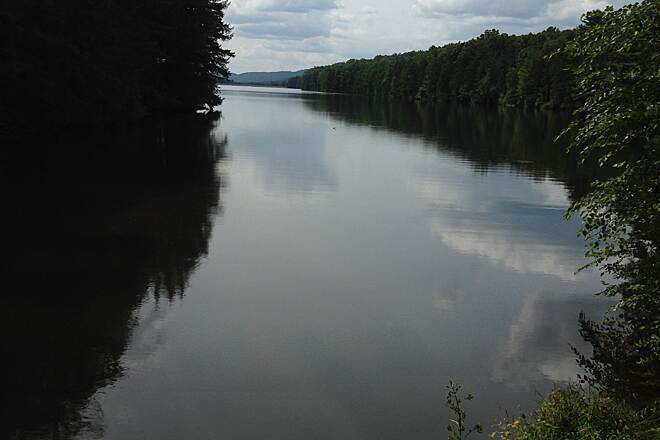 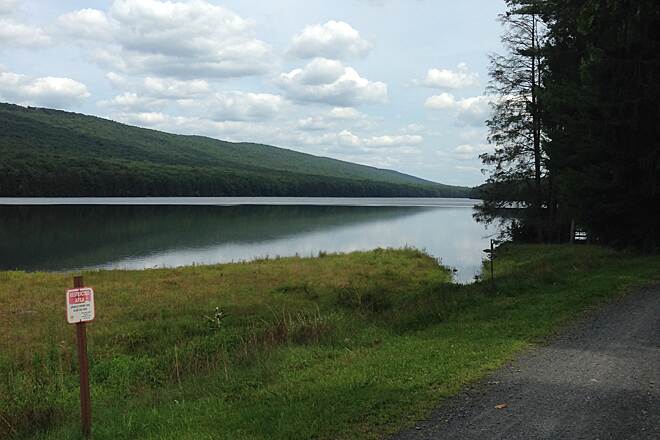 This lovely, relatively flat dirt path runs through the Roaring Creek Tract of the Weiser State Forest. Here, the south tributary of Roaring Creek cuts through the forest, pooling into three large reservoirs. The trail itself generally follows the orientation of the creek, although the waterway may or may not be within eyeshot, depending on where on the trail you are. The entire run is 8 miles (16 miles out-and-back) on a canopied corridor that is cool even at the height of summer. Keep an eye out for the forest wildlife including deer and turkey. There are trail markers and benches provided along the trail.

The Roaring Creek Tract sits on 8,900 acres and although the primary use of the creek is as a water supply for Mount Carmel and Shamokin, there are plenty of recreational activities to enjoy within the park; kayaks and canoes are allowed on the dams (users must portage in). Fishing is catch-and-release only. The forest is about a 10 minute drive south of the Knoebels Amusement Resort near Elysburg, PA.

The Roaring Creek Trail is 8 miles, bookended by two major roadways. One trailhead is along State Route 54 across from the Aqua Water office. (Restrooms are also provided). Trail users can also opt to park at the Weiser State Forest District Office lot (16 Weiser Lane, Catawissa) off SR 42 (Numidia Drive). There is an additional 40 miles of riding trails through the forest for anyone interested in prolonging their experience.

Great family trail. Can make it easy riding. My daughter loved it!! Can’t wait to get back up.

Nice ride you'll want to be rolling on at least x35's

Nice ride you'll want to be rolling on at least x35's

The parking description on the website is misleading. It is not across from the Aqua office as described. Instead drive past the Aqua Office and watch for a large sign on the left, Roaring Creek Tract Weiser State Forest. You’ll find a large parking lot and restroom. The trail is great. It seems easier to start at the 54 end, some gentle up and down with slight elevation overall.

The family rode this trail yesterday. Entered from the route 54 side and biked to the end of the second reservoir (mile marker 6) before turning around. Some hills but not too much, otherwise relatively flat. If not doing the entire trail, or with younger kids, I would perhaps enter from the other end of the trail. There is over a mile of recent pipeline digging which needs to grow back. Views at the 2nd reservoir are fantastic.

VERY Pretty Trail providing a good workout on a bike

I biked this trail eastward from RT54 to its eastern terminus at RT42 on 6/22/2019. This is NOT a flat trail as both Google and some other reviews describe. It is a roller coaster of a trail. There are places that I slowed down to 8MPH ascending the hills and then hit over 22MPH descending the hills. At approximately mile 4.1, I encountered the western edge of the McWilliams Reservoir and paralleled this for a while to its eastern edge. Near the eastern end of the trail, I encountered Kline's Reservoir. Absolutely gorgeous! If you are one that likes to have an easier return trip versus the outbound ride, then I suggest you start from RT54; the western end. I averaged 12.19 MPH on the outbound trip and averaged 12.87 MPH overall; i.e. I moved a lot faster on my eastbound return trip. The surface of the trail is NOT your typical crushed limestone but rather a very hard pressed stone & dirt trail. There were times that one was biking right next to the edge of the reservoirs. Worth the trip. If you don't have the time to do the entire trail but want to catch the awesome vistas, I suggest that you start at the eastern end @RT42 and travel westward about 3.69 miles to the western bank of the McWilliams Reservoir.

My wife and I entered on the 54 side and road across and back. The 54 side of the trail has logging going on currently and was muddy in spots. Next time I will start on the 42 side and maybe go halfway and back. The trail map does not show the restrooms in the middle or the 42 trail head. A great easy ride with enough grade not to be boring.

I cant believe I passed this trail by. This is a beautiful region. The forest road passes by 3 reservoirs. The trail is actually a forest road. There are parking areas at either end of the trail with very clean restrooms. There is even a restroom around the halfway point. There are also non-motorized boats allowed on 2 of the reservoirs and numerous trails in the surrounding area. There are picnic tables along the way, and the forest is quiet and peaceful. The road isn't flat, but not too strenuous either. I plan to go back in the fall. I'm certain the color will make this ride spectacular. I highly recommend this ride to everyone. It's a gem.