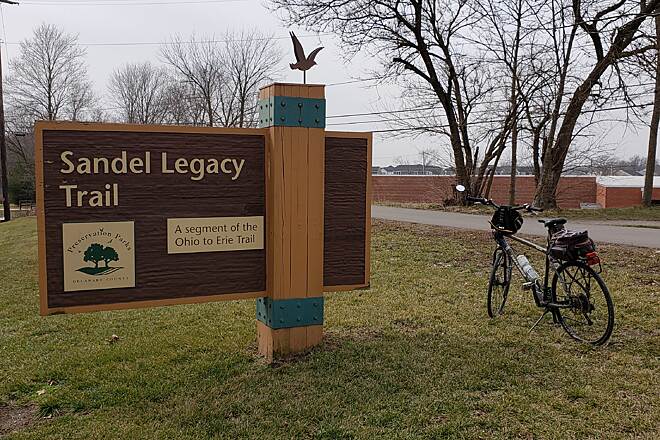 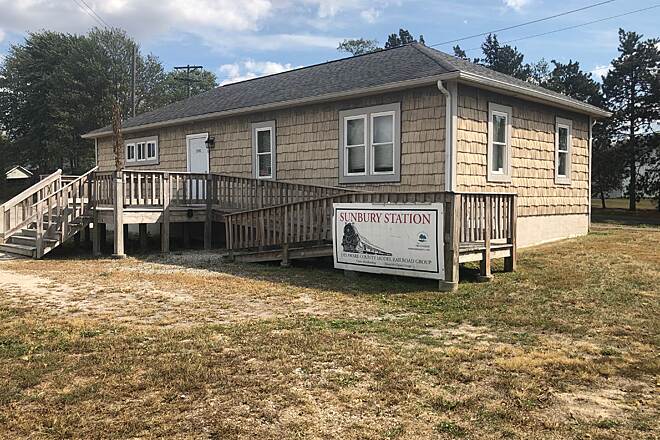 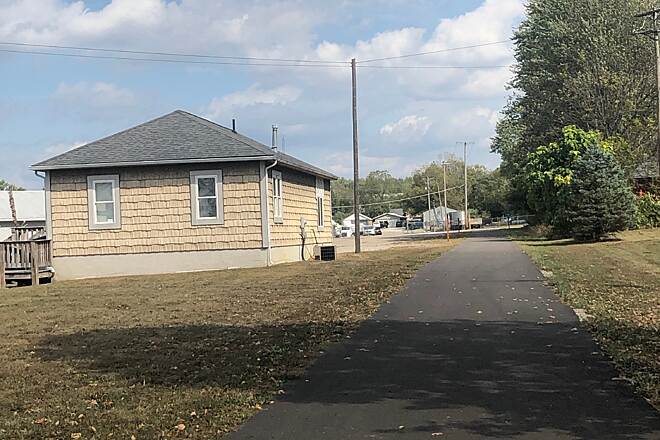 The Village of Sunbury makes its own contribution to the expansive Ohio-to-Erie Trail with the Sandel Legacy Trail. The trailhead on Columbus and Vernon Street offers an early treat: a model railroad club housed in a reused train depot, which opens once a month to the public. For now, the Sandel rail-trail, (formerly known as the Big Walnut Community Trail) is just over a half-mile long – just good enough for a short out-and-back excursion within a wooded setting where you can spot small wildlife like groundhogs.  There is an additional segment of paved trail between E Cherry and Walnut Streets. Future plans will see it connected to the other portions of the longer trail.

Park at the Trailhouse parking lot on Columbus & Vernon Street.

Not Yet Ready For Prime Time

The Sandel Legacy Trail located in Sunbury, OH currently exists in two parts which total only 0.6 miles in length. I rode what currently exists of this trail when I rode across Ohio on the Ohio to Erie Trail route.

I rode the southwest section of the Sandel Legacy Trail as it was closer to the next trail leading to Columbus, the Galena Brick Trail. There is a whole depot-like area within Sunbury, just south of the Delaware County Courthouse Square, where the old rail line ran through town. The two segments of this trail seem to be on either side of this depot area. You might actually be able to ride the area between them, but I did not attempt to do so. When I left Cleveland to ride across Ohio, I knew that construction was going on that was going to connect the southwestern section of the Sandel Legacy Trail with the Galena Brick Trail. It was my hope that this construction would have been completed between the two trails before I reached Sunbury, but I had no such luck. I guess that extension of the Galena Brick Trail will have to wait until my next OTET trip.

As far as the Sandel Legacy Trail goes. the asphalt surface is in great shape because it is new, and probably because so few people presently ride this trail. Once the connection is made to the Galena Brick Trail that will change. First of all, there is quite a bit of home development going on along this trail extension. You can see connecting trails already going into these new home communities. Secondly, the combined trails will give local residents a longer trail to ride and a safer connection to the trails that lead into Columbus. I believe this will also create a greater demand for the Sandel Legacy trail to be extended northeast through Sunbury and then further north to the Meredith State Road Trail, thus closing the North Columbus Trail Gap entirely.

At present the highlights of the the Sandel Legacy trail are the rail bridge over South Columbus Street, the Sunbury Station/Depot building (home of the Delaware County Model Railroad Group), tree identification markers along the trail that point out various tree species that occur along the trail. When the trail gets extended to the north on the other side of the depot area, the trail will cross over the Big Walnut Creek on a fairly large rail bridge.