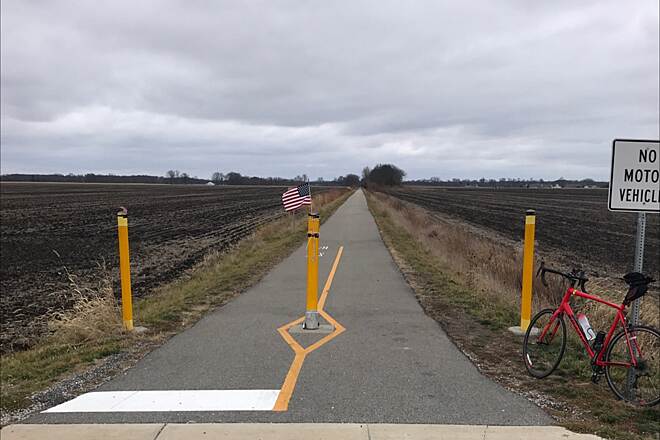 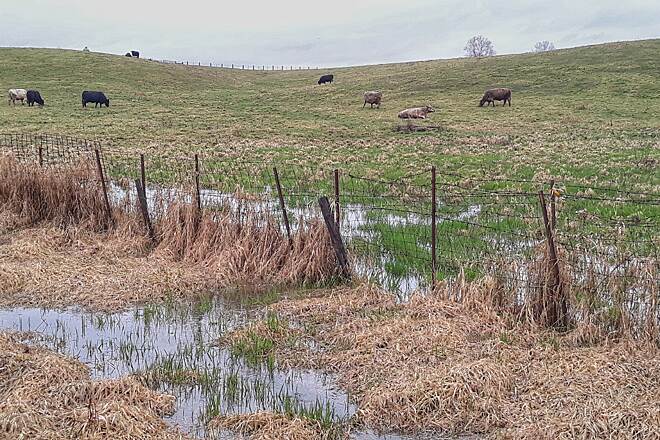 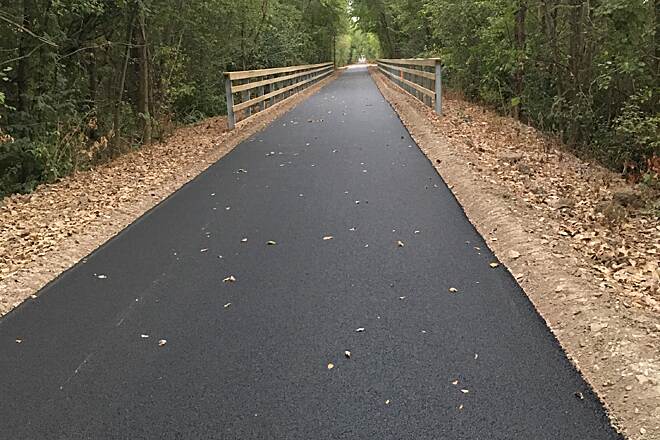 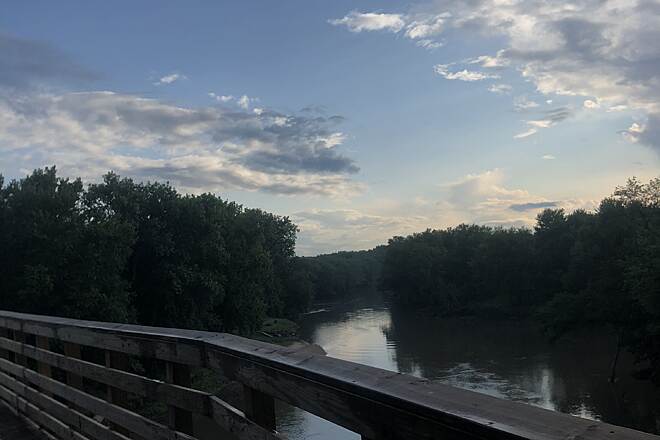 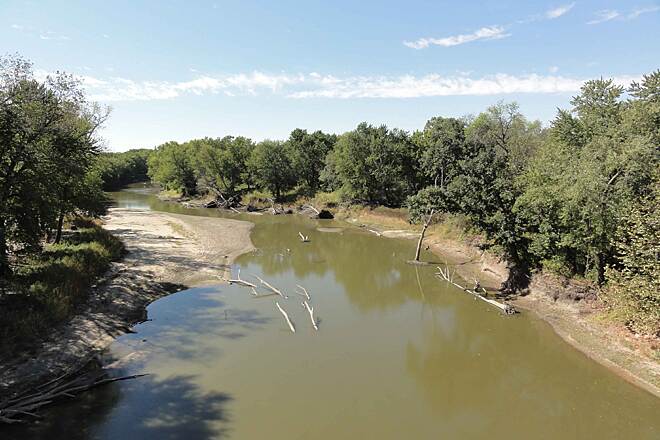 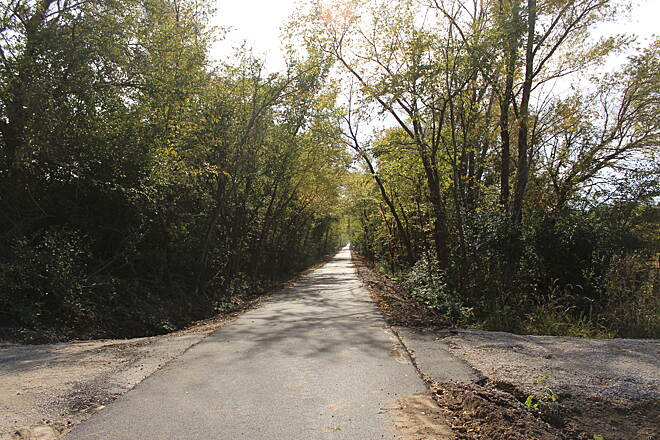 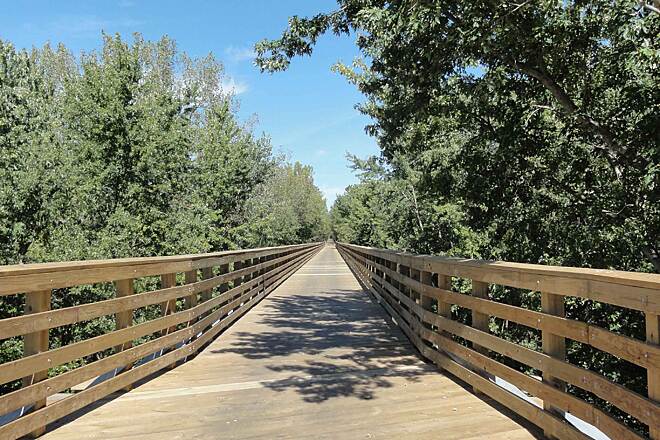 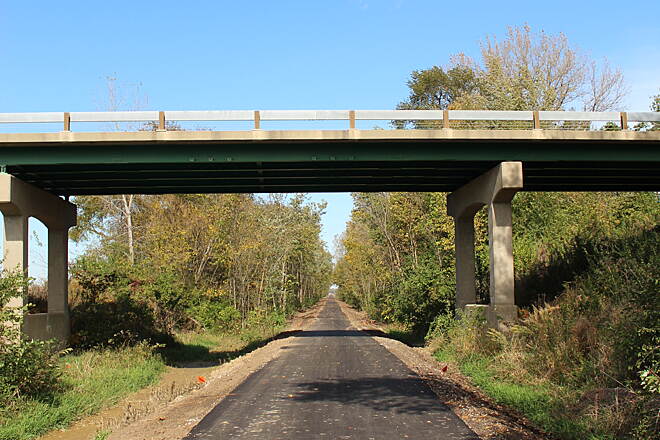 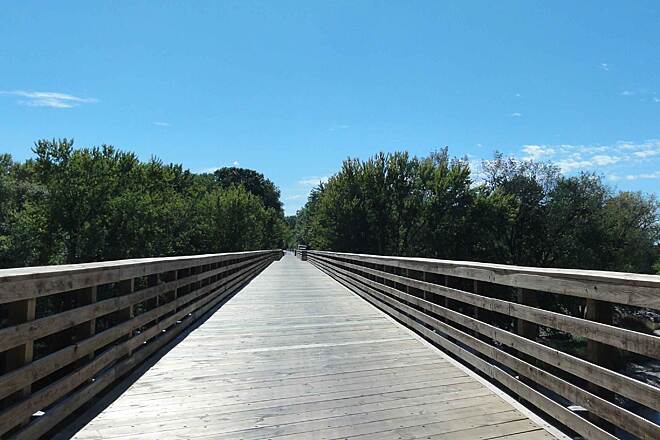 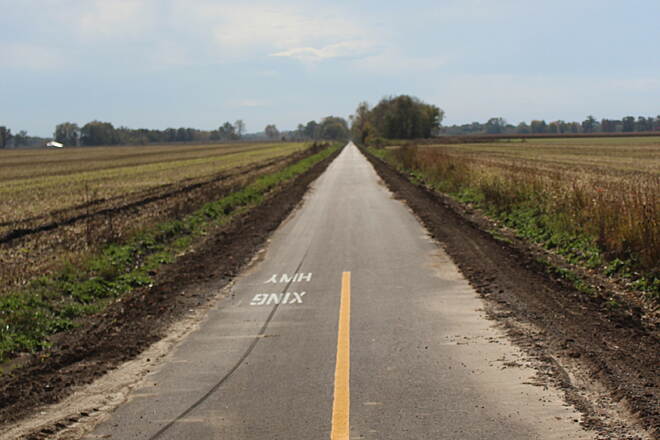 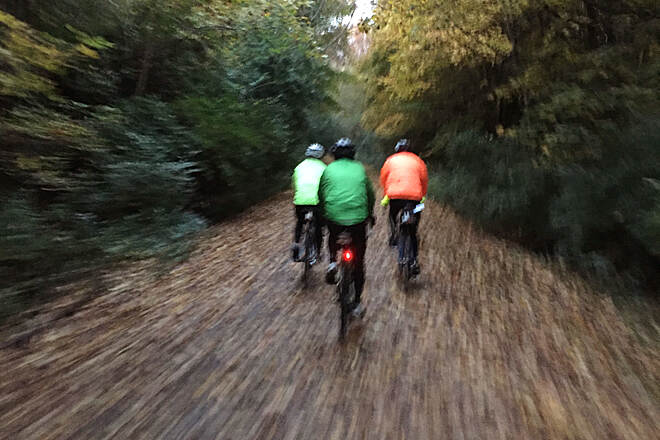 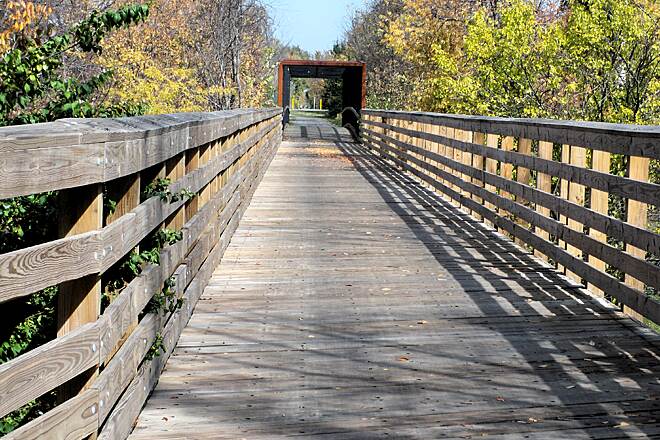 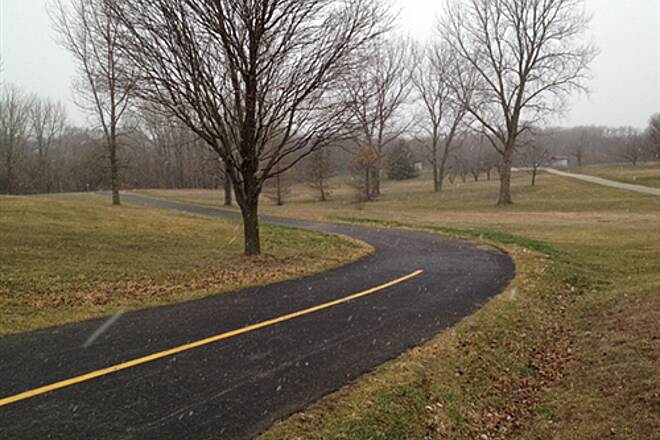 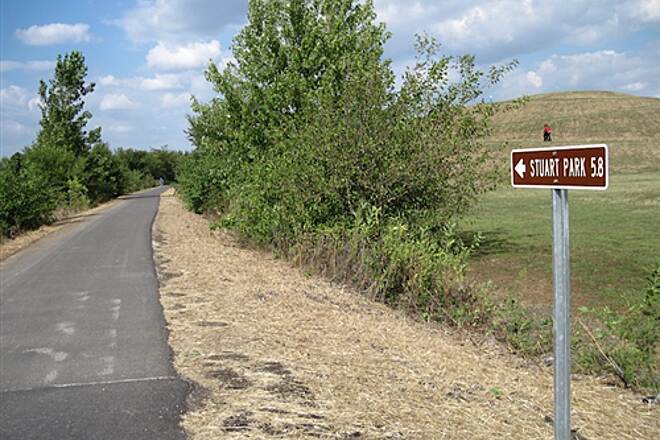 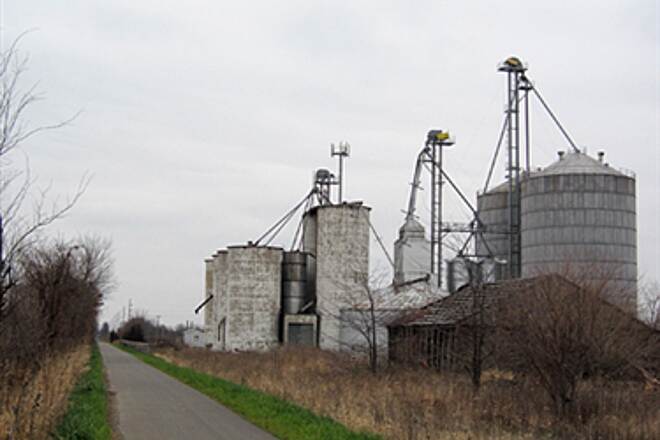 The first 5.5-mile segment of the 38-mile Sangamon Valley Trail opened in summer 2011 and runs between Centennial Park and Stuart Park in Springfield. In 2017, a 6-mile extension was opened between Stuart Park and Irwin Bridge Rd. The paved addition features two bridges that put trail users eye-level with the tree line. The trail extension  enables the recreational pathway to cross the Sangamon River, the river that provided the trail with its name. When complete, the Sangamon Valley Trail will link Girard and Athens, as well as the towns between. The trail follows an abandoned right-of-way of the old St. Louis, Peoria and North Western Railway, which later became part of the Chicago and North Western Railroad. The north-south trail is located in western Sangamon County.

There is trail access at all its street crossings south of Old Jacksonville Road. The only trail parking is in the parks at its end points. Located in the extreme southwest corner of Springfield, Centennial Park is easy to get to and has two parking lots with direct access to the trail. To get there from I-72, take the Wabash Avenue exit and turn northeast toward Springfield. Upon entering the sweeping curve to the east, turn left onto Bunker Hill Road. Proceed just over 1/2 mile till you see the turn-ins to the park and parking on the right.

For the extension north of Stuart Park, you can park at Cantrall Creek Road, which is about 0.5 miles west of Brown Rd. and a mile from the Irwin Bridge Rd. endpoint.

We cycled the 11.5 miles of the trail. There are two main trailheads in Springfield that we know about: Centennial Park at 5938 Bunker Hill Rd and Stuart Dog Park at 1800 Winch Rd. We parked at Stuart Park and began our ride there. The trail is 11.5 miles and the park is midway.

We cycled the entire path first heading south towards Centennial Park. Most of that section is shaded. About 1.5 miles from the end, there are a few road crossings. The road crossings were easy since that section has quite of few farms remaining and are low traffic areas. However, there are a few developments that are starting to encroach on what was farmland. We turned around at mile zero and headed back towards Stuart Park to continue north.

The section north of Stuart has a bit more of a rural feel. I don’t recall any road crossings on this section. The trail was mostly shaded except for one short section that was in full sun. There is a section with a fairly long bridge over the river which was a surprise.

The trail is very well maintained. There are a number of benches along that trail but only the trailheads had amenities. We cycled on a weekday and the trail wasn’t very busy. This is a great trail that I would recommend checking out.

Very nice paved 12 mile trail from Centennial Park to Irwin bridge road the SVT has a lot of tree coverage. Has limited parking so but several access points. The trail highlight is the bridge that crosses Sangamon River which a young Abraham Lincoln navigated. You can ride on the road 2 miles to Athens,Il on the northern end of the trail.

Very nice paved 12 mile trail from Centennial Park to Irwin bridge road the SVT has a lot of tree coverage. Has limited parking so but several access points. The trail highlight is the bridge that crosses Sangamon River which a young Abraham Lincoln navigated. You can ride on the road 2 miles to Athens,Il on the northern end of the trail.

Need SPEED LIMIT/SAFETY signs posted all along the trail

I LOVE THE TRAIL -- but have some SAFETY CONCERNS.

I jog every other day on the trail and there are LOTS of bikes
and some of them are going 15 - 25 mph! Some speed this
fast even when there is much traffic going BOTH directions,
which is dangerous! Some of these bikes are going as fast
as a slow moving car! Fast enough to really HURT someone
BADLY if a collision occurs due to negligence.

There are baby buggies and slow solo walkers and couples
walking hand-in-hand and runners and about everything you'd
imagine or expect . . . in other words, a VERY MIXED POPULATION
with people moving at a VARIETY of speeds.

Some of the bikers seem to be trying to explore how FAST they
can go (disregarding safety concerns) not to mention an utter lack
of courtesy and regard for others, etc.

There ought to be a SPEED LIMIT posted or SOMETHING!
Someone may get badly injured!

We rode this trail on 7/6/18. Started at Centennial Park and rode north. This is a great trail to ride on. Outstanding bridges, very well maintained! We will be back to ride this one again. If we had more time we would have done 2 loops on this one.

It was pretty clear that they will be expanding this trail beyond it's current run from Stuart Park to Centennial Park. Due to time constraints I rode from Stuart to Iles Ave. and back. There's a very slight uphill run over that length, but it's not at all noticeable because the trail is very smooth. There were a constant flow of trail users, but it didn't feel crowded at all. There seemed to be an above average number of dog walkers on the trail, but I chalked that up to the dog run located in Stuart Park.

I had spent the day in workshops and at the State Capitol, so this was a perfect way to burn off some energy before a long drive home. I was very glad I made the stop and will likely do this again when I'm in Springfield.

This trail is fairly flat but very well maintained. The City of Springfield really does a superb job with all of its bike paths and should be a model project for all Illinois communities.
A mix of open and tree covered canopy type cover, it has 4 or 5 road crossings which are low traffic excluding one that you have to pay close attention too.
Over all distance park to park is 12.25 miles, parking lot to parking lot. Mid way bench rest areas for those that desire a break.

I give it a A+ for its category of being flat.

This is a new trail for our family and has become a favorite of ours.

We start off near the Bunker Hill Road entrance and it's nice and flat ... until you get the last part near Stuart Park ... a few hills to deal with but not bad (nothing big) ... nice and steady and you can make it. Just don't take bikes too fast the down hill parts as there are quick, sharp turns to make.

Great area to walk or ride. Lovely bridges along the way.

This trail is nicely paved, but very little shade. If you don't mind the heat, this path is smooth and maintained.

Great for a down and back

I was most impressed with the surface of this trail, light colored so it won't be scorching hot in summer, little bit of roughness to it so won't be slick when wet but most of all no cracks,holes or raised/sunken spots for the whole 5.5 miles. Great parking at both ends n enough in between also. At the southern 1/2, it has a few little kiddies parks,a golf course and nice homes that are close enough to seek help and I would think keep mischief at bay but yet not take away from the "in nature " feeling. The northern 1/2 was more shaded n secluded, ending at a park. There were a few street crossings through out the trail but well marked for cars and those on the trail. What road crossings there were, were subdivision type streets n not busy. Also they mowed along both sides of the trail so I think you could run on the softer surface of grass about the whole 5.5 miles if you wished. But I think they could have had a water stop or two since they were close to a couple of homes to have tapped into. Also the there was a little sloping off to the side but I guess it was needed for water to drain. I didn't see anywhere that water would puddle which is amazing. Very wide trail also

..of the more extended trail yet to come. Sept '12. We found a small new parking lot on the west side of the southern trail end. There were also porta potties there and at the parking lots in both trail end parks.

A tale of two trails

The southern half of the trail has five grade-level crossings, which are good for access but can slow down trail users. The first two -- if you're northbound from Centennial Park -- make it easy to look ahead for cars, so you don't have to slow down if you don't need to. But the last two have various trees and topography that necessitate slowing to a crawl just to see if a car is coming.

But after the last crossing -- at about the 2.8-mile mark -- the northern half of the trail is smooth sailing all the way to Stuart Park.

The scenery is mostly suburban in the southern half with some nice wooded areas in the northern half. At the 2-mile mark, there is a cool/creepy abandoned grain elevator complex. There is ample signage along the trail and several benches are available at various points. The existing trestles have been fitted with some nice wooden approaches.