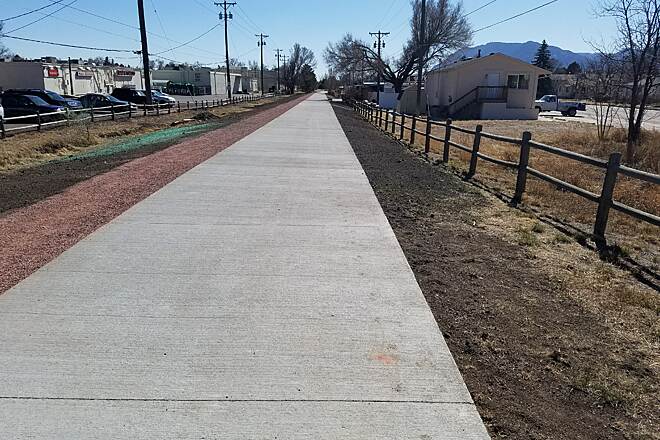 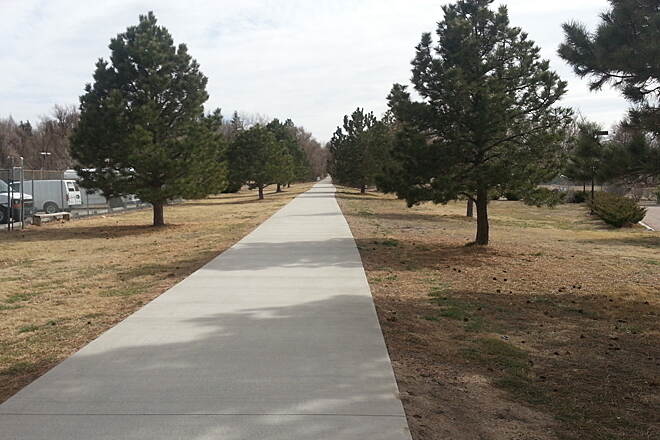 The paved Shooks Run Trail runs north–south along Shooks Run Creek near downtown Colorado Springs. It is one of the easier bike paths in the area; however, runs slightly downhill from north to south. The trail gets plenty of sunshine even during the winter and a favorite among families, connecting the downtown with neighborhoods along a safe corridor. Shooks Run also offers a gravel path for running.

The northern end of the Shooks Run Trail meets up with the Rock Island Trail two blocks north of Jackson Street and one block east of Nevada Avenue (behind the Bon Shopping Center between Wahsatch and Weber). The southern part of Shooks Run will soon connect with the Pikes Peak Greenway.

Access the Shooks Run Trail from Shooks Run Park on N. Franklin Street or at the northern end from the Rock Island Trail.

The city seems to love cement trails, i guess they have lots of money. I would prefer a nice gravel trail myself. The cranks and grinding to level the cement has improved the surface a lot.

The city seems to love cement trails, i guess they have lots of money. I would prefer a nice gravel trail myself. The cranks and grinding to level the cement has improved the surface a lot.

My husband and I biked this trail today. We liked it. Did not see any vagrants or encampments.

My husband and I biked this trail today. We liked it. Did not see any vagrants or encampments.

I am a fitness skater who loves speed. This trail is worse than every trail but prats of the Highline Canal Trail in Westminster, CO. Moved here last week and was looking for a 5-star trail system like the one in Denver. This one is a full-star unlike the 1/2 star Rock Island. Do not skate here without SUV skates or large wheels, preferably the latter to avoid flats

Pros:
- Some cool restaurants and an ice cream place along the way
- Covers nicer neighborhoods in the city

Cons:
- Have to cross major and minor roads every 1/10 - 1/4 mile
- Parks along route need some serious care
- Major chunks of concrete missing
- Dirt under the legacy loop bridge that never gets cleaned up
- Dirty
- Broken concrete in patches

Does this city care about the park system? You can get from Denver to Aurora, Chatfield to Golden on some of the nicest sidewalk. Here it feels like the last time anyone paved a trail or removed and power washed the dirt away was 1995. There is 1 nice section though with a new sidewalk between the bridge and Tasty Freeze. Could be such a great skate/run/biking trail. They will need to enhance the trails to compete with the quality of life in the state.

Trail Upgrade between Jackson St. and Fontanero St. is Complete!

The old cracked and crumbling asphalt through this section has been replaced with new concrete and a gravel shoulder for runners thanks to ballot measure 2D! Awesome!