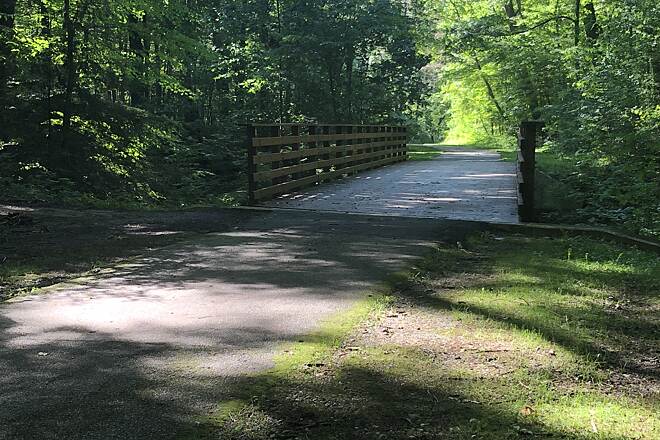 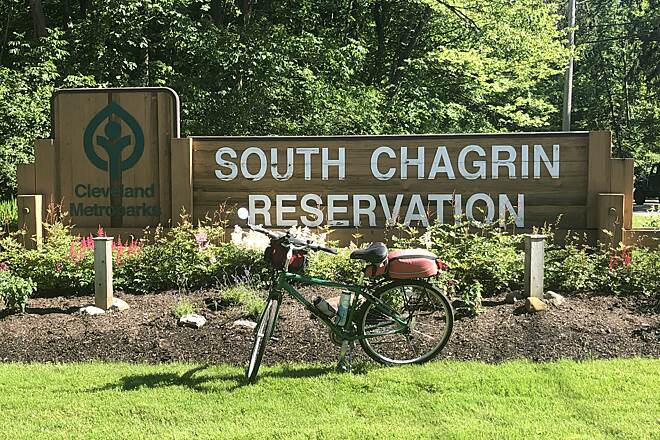 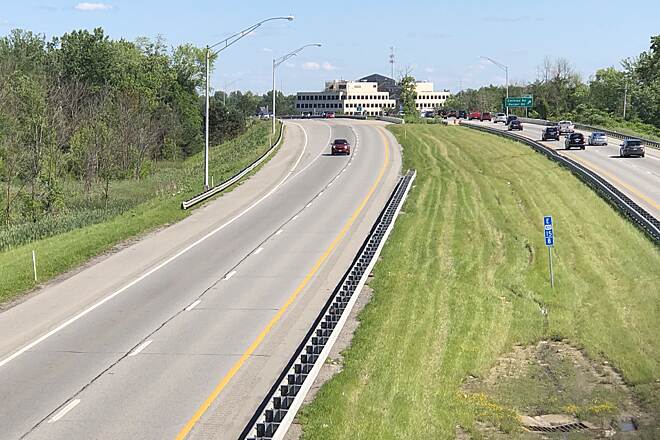 The South Chagrin Reservation All Purpose Trail offers a paved route just over 7 miles through its namesake park in northeastern Ohio. From its western end on Richmond Road, the trail follows Hawthorn Parkway, passing Sunset Pond as it heads northward. The surrounding landscape is largely residential, buffered by wooded areas, and you will have a few well-marked street crossings.

About midway, the trail turns eastbound and you'll come across the Harper Ridge Picnic Area, where there is a parking lot and restrooms. The trail ends in a loop around the Shelter House Picnic Area. Coming off the loop, you can access the park's bridle trail system and a hiking path that leads down to the Chagrin River and a sandstone carving called Squaw Rock.

You'll Climb Up Hill No Matter Which Direction You Ride

No matter whether you start from the southwest or northeast end of this trail you will find yourself climbing. This is because the trail crosses over the ridge that separates the watersheds of the Chagrin River to the east and Tinkers Creek to the west. Of course, once you pass the Harper Ridge Picnic Area near the trail's midpoint then it is downhill the rest of the ride. The climbs are not necessarily difficult, but their are a few short spots where the gradient in all likelihood exceeds 7%. I mention this as many TrailLink users will find that this trail is definitely not a rail trail with gentle climbs.

Less than 20 miles from Cleveland, the Bedford Reservation offers a scenic, natural oasis with many amenities and attractions, including opportunities...

Though not far from two of Ohio’s largest cities, Cleveland and Akron, the Bike and Hike Trail passes alongside beautiful natural areas, including the...

The Ohio & Erie Canal Towpath Trail is an amazing trail journey that takes users from the heart of this country’s industrial might in cities like...

The Ohio to Erie Trail is a colossal project, not just for the state of Ohio but also nationally. Dreamed up more than 25 years ago, this route will...

The Garfield Park Reservation All Purpose Trail is located in Garfield Heights, a southeastern suburb of Cleveland. The paved pathway spans nearly...

The Brecksville Reservation All Purpose Trail offers a pleasant paved pathway connecting the community of Brecksville with the Ohio & Erie Canal...

The Shaker Median Trail provides three miles of paved, multi-use trail in the streetcar suburb of Shaker Heights, to the east of Cleveland, Ohio....

Picking up right across the street from the southern end of the Harrison Dillard Bikeway, the Lake-to-Lakes Trail provides a path for cyclists and...

South of Cleveland, the Ohio & Erie Canal Reservation All Purpose Trail offers an outdoor excursion of just over 7 miles in Cuyahoga Heights. A good...

The Harrison-Dillard Bikeway is a north-south urban path that not only connects the Lake Erie shoreline with the University Circle district, but...

The Gates Mills Interurban Bridge, known locally as simply The Walking Bridge, offers a pedestrian-only route over the scenic Chagrin River. The steel...