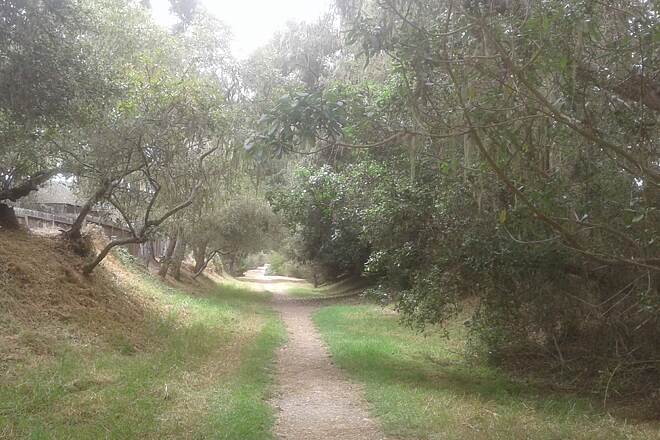 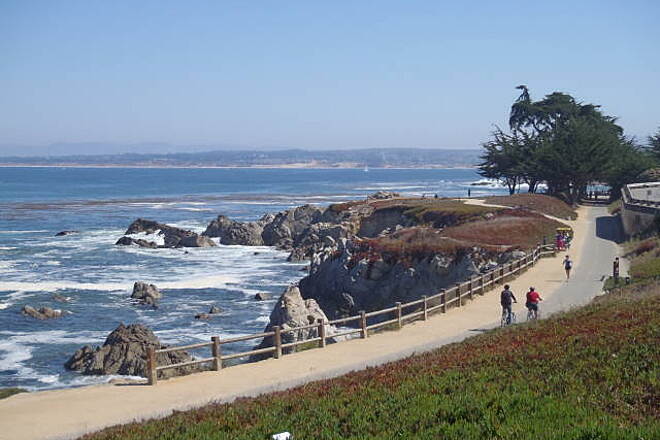 The trail passes through the Pacific Grove Municipal Golf Course, crosses Lighthouse Boulevard and then runs through forested neighborhoods before crossing Sunset Drive. The final stretch of trail leads to 17 Mile Drive along the Links at Spanish Bay golf course.

Along its route, the trail provides access to the Asilomar Conference Grounds and other trails that lead to the beach. From the trail's northern endpoint, take Jewell Avenue to reach the paved Monterey Bay Coastal Recreation Trail, which continues northeast on the same former Southern Pacific corridor through Monterey to Castroville.

There are no facilities along the trail and parking is limited to street parking, which is plentiful in the area. Be sure to obey any posted parking restrictions.

A friend and I parked one car on Del Monte near Egan, then drove the other car to a spot just outside the PG gate on 17 Mile Drive. We parked next to the fire road gate leading into the Rip Van Winkle Open Space. We then crossed the street and found the (unmarked) beginning of the trail. We made our way between the back sides of some businesses along Sunset Drive and the edge of the Spanish Bay golf course, crossed Sunset Drive at Crocker, and picked up the trail heading north.

Just after we crossed Sinex Avenue, we arrived at the site of the Asilomar station (such as it was) with a rebuilt replica of the tiny passenger shelter and an explanatory sign. Continuing north, the trail eventually turns into a narrow street, appropriately named Railroad Way, which terminates at Lighthouse Avenue. After crossing Lighthouse, we skirted the edges of the El Carmelo Cemetery and came out on the golf course, now heading east. We followed the path, crossed 17 Mile Drive and finally came out on Del Monte, close to where we had parked the first car. We followed the former track bed as far as a fence with a locked gate, on the other side of which is the mobile home park whose apparently-unnamed driveway (private property, no trespassing, as the sign says) continues the former train route to Lovers Point.

We picked up the car we had left on Del Monte, and drove it back over to where we had left the other car.

My step counter told me we had walked 1.7 miles total.

Although none of the trail is marked, it was not at all difficult to follow.

For anyone interested in historical information (and photographs) of all the railroads around the Monterey Bay, santacruztrains.com has a wealth of information.

Winding along the Pacific coast, the Monterey Bay Coastal Recreation Trail offers breathtaking views of the Pacific Ocean and a great way to tour...

The Watsonville Slough Trail follows its namesake waterway through a residential area of the city. It's part of a system of trails in a wetland area...

The Ohlone Loop Trail offers a birder's paradise in a wetland area of Watsonville on California's central coast. Its location, bordering a residential...

The Upper Struve Slough Trail is part of a network of trails running through Watsonville's wetlands, offering a natural, outdoor experience and...

The West Cliff Drive Bicycle Path is just over 3 miles long, but, with its gorgeous backdrop of ocean waves and dramatic cliffs, you'll wish it was...

The San Lorenzo River Parkway Trestle Trail is the first completed segment of the Coastal Rail Trail, which will eventually run 32 miles from...

The Santa Cruz Riverwalk Trail follows both sides of the river through downtown Santa Cruz, a California beach town on the shores of Monterey Bay....

The Great Meadow Bike Path provides an important 1.5-mile transportation route from the main entrance of the University of California at Santa Cruz to...

This extremely scenic rail-trail is located in the majestic Forest of Nisene Marks State Park near Aptos, California. The park was the site of major...

It is difficult to travel through suburban Santa Clara County for more than a few minutes without noticing an abundance of cyclists and runners in the...

For most of its length, the scenic Coyote Creek Trail meanders along its namesake creek south of the city of San Jose. South of Metcalf Road, an...