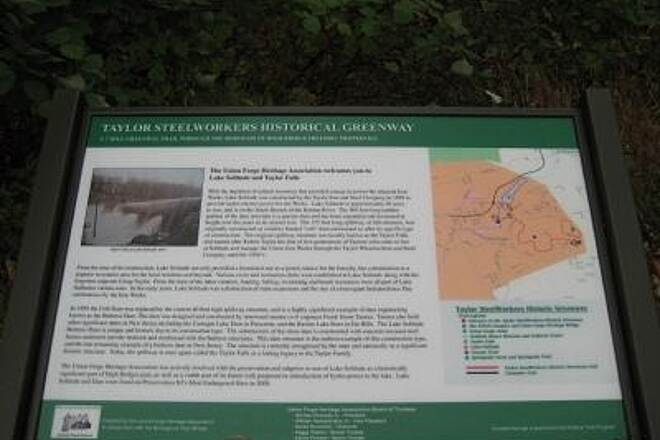 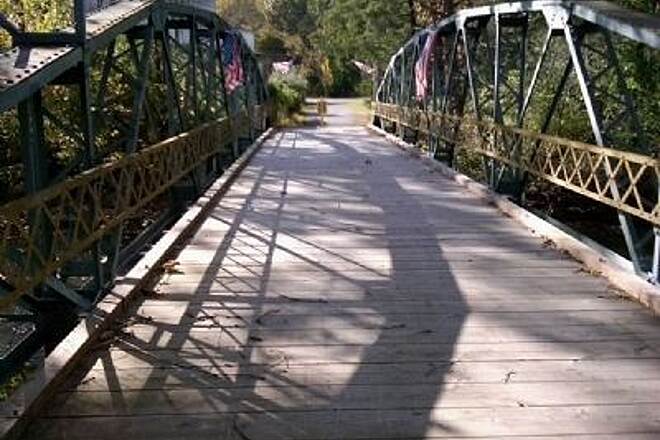 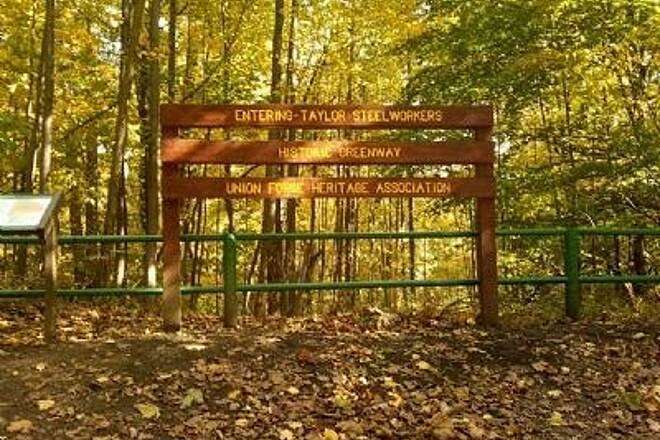 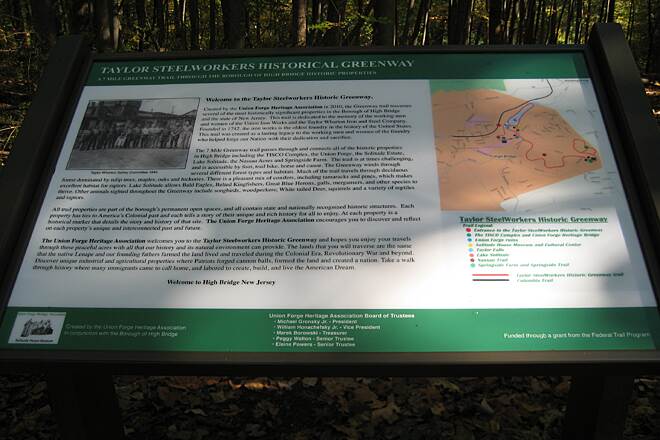 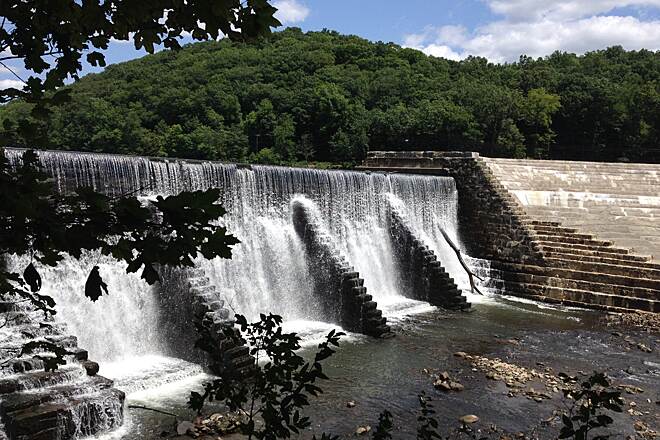 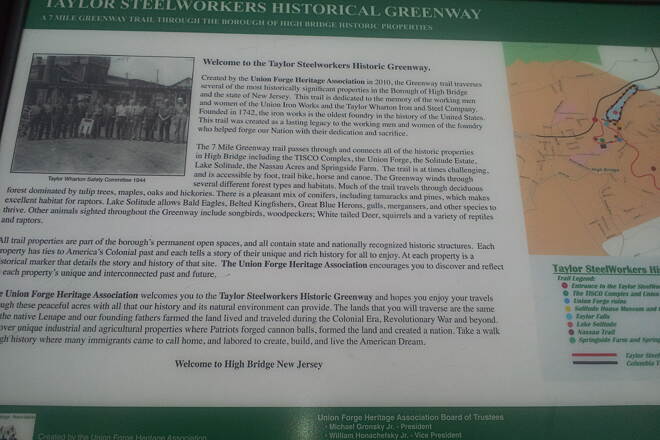 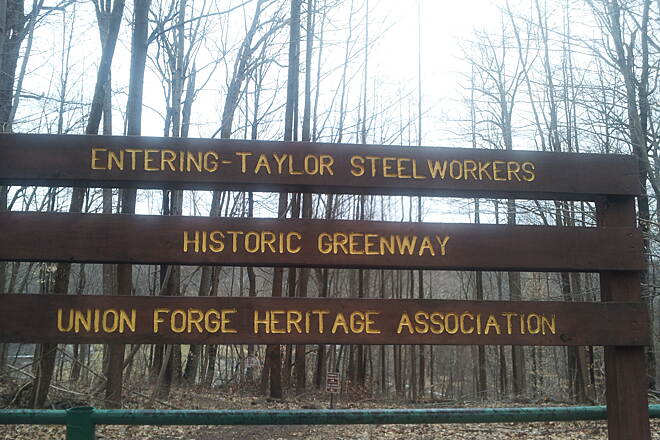 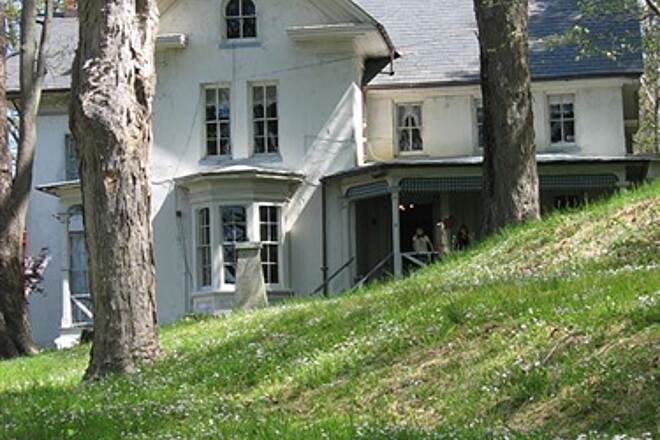 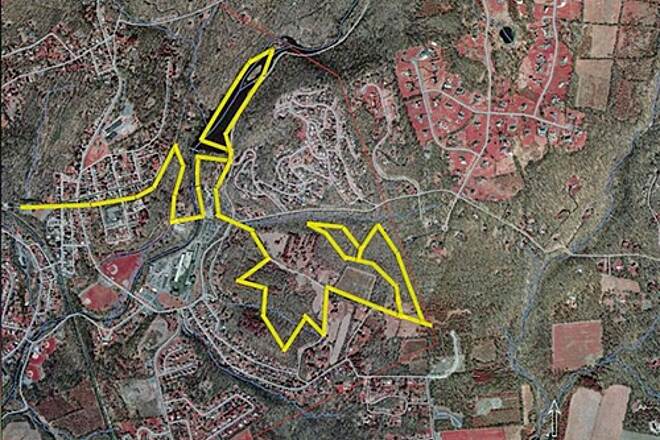 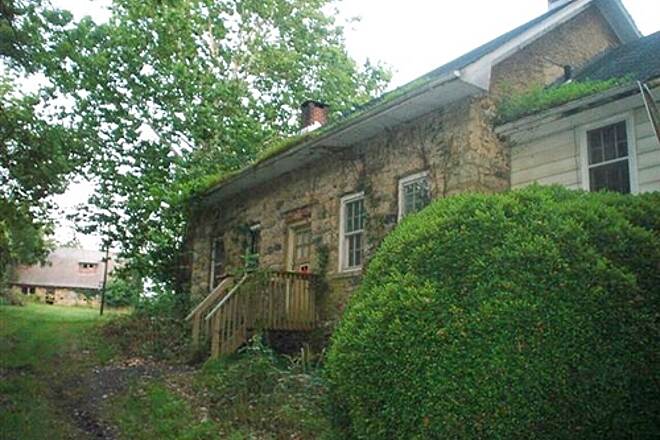 View Trail Map Send to App
DESCRIPTION: The Created by Union Forge Heritage Association in 2007,Taylor SteelWorkers Historical Greenway is a 7 mile trail that winds its way through High Bridge criss-crossing a number of historical sites and beautiful scenery. This is the perfect trail for wildlife watchers and history buffs alike. Follow the Columbia Trail for approximately 1/4 mile looking on the Right for the trailhead gate that includes a sign and entrance for the famous Lake Solitude Dam. Heading in a southeasterly direction from the Columbia Trail, this trail proceeds to the historic structures of the TISCO Complex and then onto a 100 year old truss bridge. After crossing the bridge, the trail proceeds north along the South Branch of the Raritan towards the Lake Solitude and Lake Solitude Dam (circa 1858), Solitude House Museum and the Union Iron Works ruins (circa 1742). From there the trail continues on to the entrance of the Nassau Trail, works its way to Springside Farm (Springside Lane, High Bridge) and its adjoining woods and proceeds from there to its end at Lord Amesbury's Furnace, circa 1752 , located in Clinton Township. For more information about this trail contact Union Forge Heritage Association at 908-638-3200

WILDLIFE: Bald Eagles are a familiar sight in the region. They often are easier to spot in winter when trees are bare of leaves. Check the trees along the trails; seasonal sightings include Brown Creeper, Eastern Phoebe, Ruby- and Golden-crowned Kinglets, Blue-gray Gnatcatcher, Palm, Pine and Yellow-rumped Warblers and Yellow-throated Vireo. Look a little deeper into the woods for Hermit and Wood Thrushes, Veery, Ovenbird and Red-eyed and Blue-headed Vireos and Pileated Woodpecker.

DON'T MISS: Several miles north of High Bridge, the Columbia Trail passes over Ken Lockwood Gorge Bridge, built 80 feet above the gorge floor. This steel span was built in 1930 to replace the original wooden trestle bridge, which was the site of a memorable 1886 train wreck.

DIRECTIONS: Exit park by turning Right onto CR 513 South and after 2.0 miles turn Right onto Church Street following signs for CR 513 South. Turn Left onto CR 513/Main Street and take immediate Right turn into the Municipal Parking Lot. Walk out of parking area and cross the street to where trailhead begins.

A Historical and Environment gem in Hunterdon. Remember to pay attn to detail to the information on these wonderful kiosks. Seven in total.

No helpful trail markers or signs.

We came on a beautiful September day in the middle of the week. The entrance to the park was well marked on the Columbia Trail but after that you're on your own. Turn left and we ended up in someone's backyard, turn right and it only went for about half a mile with a couple of buildings that did have signs but ended at two bridges you couldn't cross. No signs anywhere that things were closed for any purpose. We asked two locals walking dogs along the trails where things led and they didn't know any more than we did. Said they had lived there for two years and still couldn't figure it out. We came with mountain bikes but there was no way we could use them safely, plan on hiking it only. So overall it was a pretty disappointing experience and we did the whole thing in half an hour.

Partial closure as of summer 2020

Seems like part (most?) of the trail is closed as of July 2020 by order of the mayor of the Borough of High Bridge due to "unsafe conditions." Supposedly, the order is only temporary, but the trails are still closed despite the order having nominally expired. Not sure when/if the trails will actually reopen.

A short stretch of the trail from the Columbia Trail to the Union Forge Bridge is still open. The part that's open is interesting, so I hope the rest reopens within a reasonable timeframe.

This is mountain bike/hiking trail

Maybe it's a great trail but you need mountain bike to ride it.

Used as both a hiking and an experienced mountain biking trail, this 7 miles is quite a stretch of the leg. Each step of the way offers a little more to the reader on this sites amazing history which dates back to the 1700s and still active today. You can almost picture yourself in the middle of the history. I hike this 4 times a week.

not great for cycling

This trail is more of a hiking rather than biking trail. It's a good mountain biking if you like rougher terrain, hills, roots and rocks. But this is not for a family type ride. We ride with our kids girl 12, boy 15 regularly about 20-30 miles at a clip and have done some challenging trails but nobody likes this.

During the course of 7 miles, you will follow international trail markings in yellow for the Taylor Steelworkers Historical Greenway. There are two spurs marked in red and green for the Lake Solitude Overlook and Lake Solitude Dam. At each historical site, seven in total, there is a clearly marked kiosk next to each stating the unique history and description of the individual site with a historical photo included. Each site is clearly marked on the map to the right on the kiosk throughout the tenure of the trail.

Great stretch of the leg , about 7.5 miles through about seven or eight historical sites. A well used trail through a number of unique historical sites of the "oldest continually operating foundry in US History" and natural beauty and bridge. For those who want to get off the beaten path. Marked in yellow for the Greenway, with red and blue tangents for the Lake Solitude Dam and Dam overlook. Very popular with the local community.

The trails are okay .... The trails are marked but the markings don't match the map on the trailhead or the historical sites and the maps on the trailheads and don't show you where you are, which really doesn't matter because the area is not that big. If you are looking for solitude or animals this probably is the place for you. It's a nice walk but it's really a suburban grouping of trails and that's about it

Wife and I took the trail off the Columbia Trail on bikes. The trail is marked with a huge sign, and blazed in yellow. A few feet onto the trail, there is a left spur that takes you to a view of the dam below (worth a visit!). The trail goes right down the hill. The first part was finished and bikable - the lower section had roots and some erosion so wife wanted to walk it. At the bottom you see the steel works building. The trail goes to the left over a refinished bridge. It passes through an easement provided by an existing industrial company. The trail was covered with a thick mulch of chips and small branches - it was bikable but barely. Past the easement the trail turns left, and after a few hundred feet comes to a T intersection - the full trail appears to go right - we went left towards Solitude house.

I had seen two maps of this trail - one has the trail marked with yellow lines overtop a satellite image, the other in red over a map. Both show the trail going around Solitude lake - I found bits of a trail but what I saw was not bikeable. Also, both show a crossing over the dam - but no crossing exists. So, we decided to get onto River Road at Solitude Dam, and proceed north on it. Good choice!We took the road to Califon and returned on the Columbia Trail.

Again, the both trail maps show a crossing at the top of Solitude Lake, and I was looking for one, but never did see anything. There was one spot where it appeared shallow - maybe 6" of water - but I wouldn't ride a bike across. If you did get across, you would not be able to make a loop anyway

Based on what I saw, this trail is really meant for hikers - even though one blurb I read mentioned biking. One nicety is that the connection we took permits one to park at the Columbia Trail head, and get to Califon on River Road, then looping back on the Columbia Trail. During our ride at 10:00Am, not a single car passed us on River Road. Half way to Califon the road become gravel, then it's closed to cars for a mile or two. We arrived at the center of Califon without having had one car overtake us!