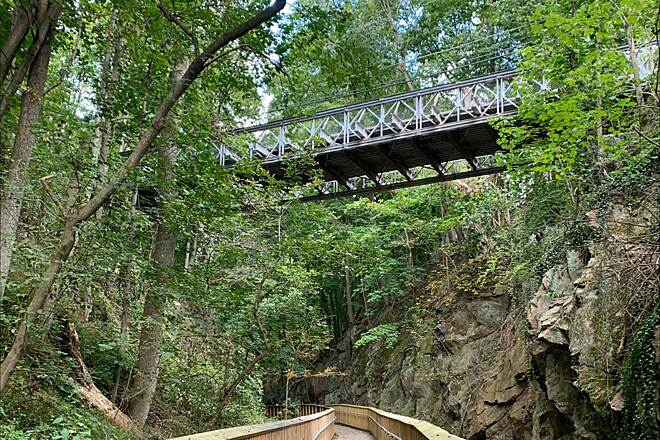 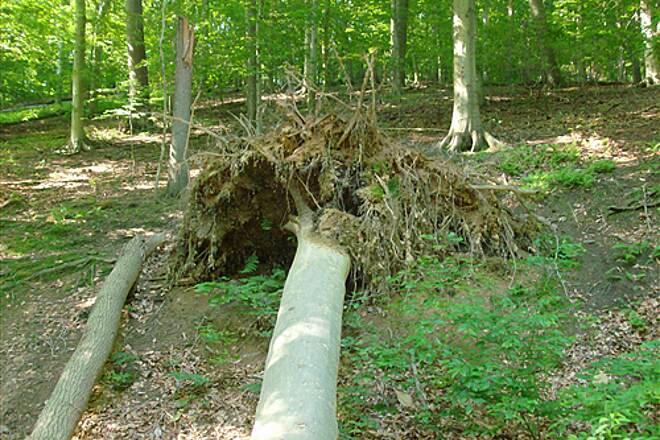 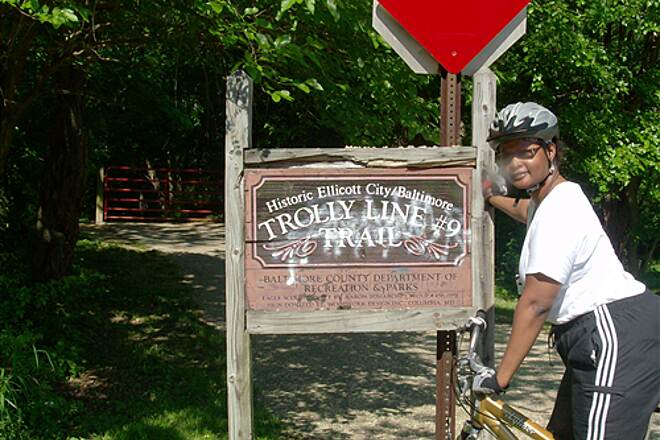 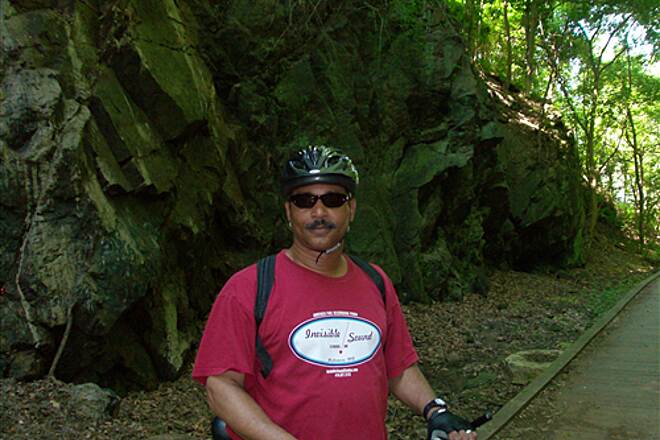 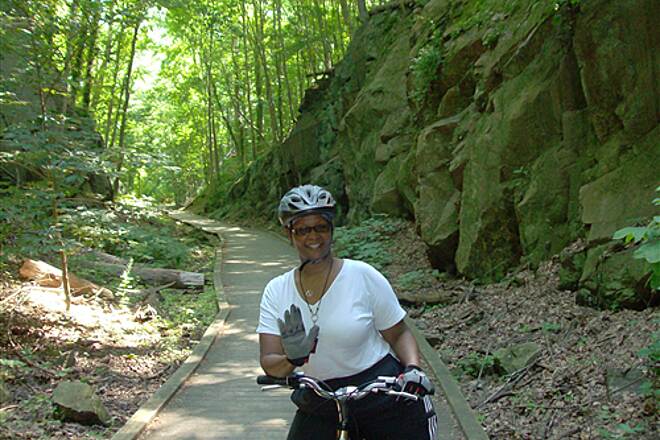 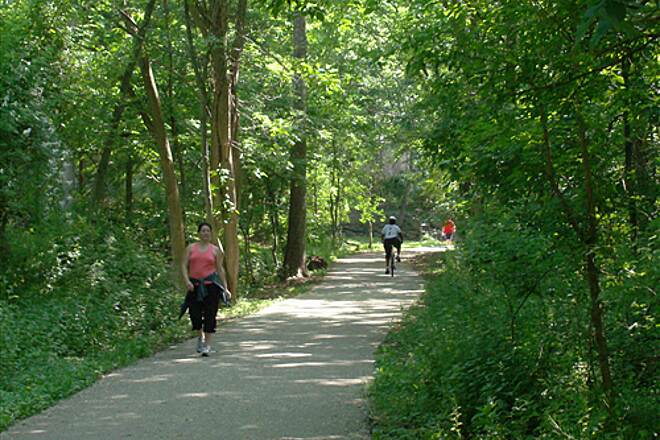 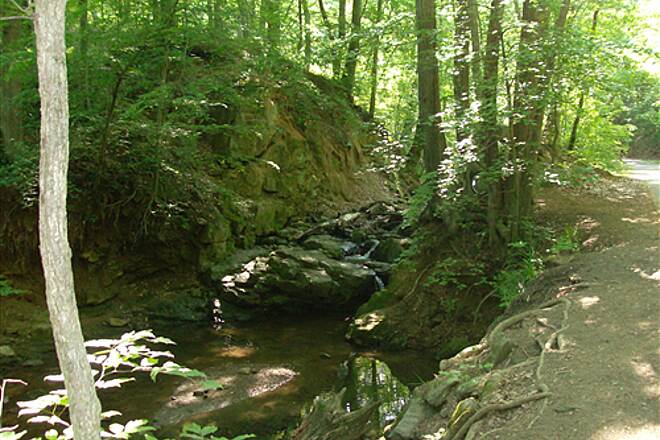 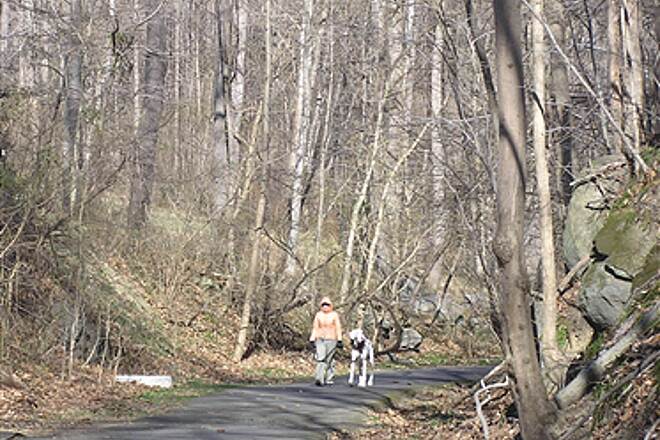 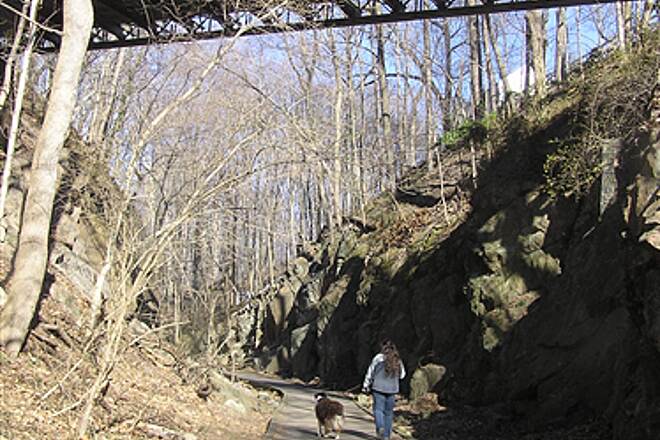 The first thing you may notice about the Trolley Line #9 Trail is the boardwalk that curves between the bluffs of massive rock. The granite was hand cut in the 1890s when the electric streetcar rails were built from Ellicott City to Catonsville. Today these 100-foot-high walls create a striking gateway to the trail from historic Ellicott City just across the Patapsco River from Oella.

The boardwalk quickly gives way to pavement as the trail winds uphill through the woods. On your left, a babbling stream feeding into the Patapsco River provides a peaceful soundtrack to your journey. Tall shade trees keep the trail—and you—cool while you climb through the woodlands and occasionally pass homes that border the trail. Near the 1-mile mark, a short detour off the trail will take you to Banneker Historical Park & Museum, which has nature trails, archaeological sites and living history areas re-creating the Colonial farm life of Benjamin Banneker, an African-American astronomer and farmer.

Back on the trail, the rustic scenery gives way to a more suburban landscape. The few road crossings are well marked and the gradual slope makes for a pleasant trip both up and downhill. When you reach the end of the trail, simply turn around and head back downhill to enjoy Ellicott City, including the Baltimore & Ohio Train Museum, which highlights the history of the nation's first railroad.

The Trolley Line #9 Trail immerses visitors in a historic working community that sprung up more than 200 years ago in a gorge formed by the Patapsco River near Baltimore. This 1.5-mile segment of an old trolley line begins amidst unadorned brick-and-stone buildings that housed mills and factories. The trail travels through a wooded creek valley and ends in a contemporary suburban neighborhood.

The electric-powered cars of the Catonsville & Ellicott City Electric Railway Co. started carrying commuters and some freight between Ellicott City and Baltimore in the 1890s. The railway endured, under several company names, until the mid-1950s, when it made its last run under the auspices of Baltimore Transit Co.

Pulling into the parking lot in the old mill town of Oella, you’ll pass between still-standing stone supports for the long-gone trolley bridge that crossed the river into Ellicott City. These structures are now included on the National Register of Historic Places. Nearby, old buildings house cafés and coffee shops.

The trail begins as a boardwalk that curves uphill between rocky bluffs. The granite from these 100-foot walls had to be hand cut, a time-consuming and dangerous task for 19th-century workers. Trail builders later installed the boardwalk, as the former railbed could get quite muddy.

The trail climbs a moderate grade to a stone arch bridge at 0.4 mile, crosses Cooper Branch, and more or less levels out; the trail crosses another stone arch bridge in half a mile. The rocky stream provides a peaceful soundtrack for your excursion through the woods.

Back on the trolley line, the trail emerges from the woods into a small commercial district with a bakery and then ends at Stonewall Road in 0.4 mile. To explore farther, take a 1.2-mile jaunt on the shoulder or sidewalk along Edmondson Avenue, which brings you to the No. 8 Streetcar Path, a 0.4-mile-long relative of the No. 9.

The return trip includes that downhill through Oella to the river. Now is a good time to try those eateries or take a short stroll across the Frederick Road bridge into old Ellicott City, where you’ll find the circa 1930 B&O Ellicott City Station Museum, housed in the nation’s oldest standing railroad depot.

To get to Oella from downtown Ellicott City, take State Route 144/Main Street east to the Patapsco River, where the street becomes Frederick Road. Cross the river and take an immediate left (north) onto Oella Road, where you will find trail parking on your right (the river is on your left). You must climb stairs to get to the trail from here.

For accessible parking, follow SR 144/Frederick Road east past the Patapsco River and turn north (left) onto Westchester Avenue. A small parking lot will be on your left, just before a switchback in the road.

A fine trail along the old Trolley bed. Better to park in Ellicott City end and walk up to Catonsville. Then it’s all downhill for the walk back. Plus a bakery half way up/down! https://en.m.wikipedia.org/wiki/Trolley_Line_Number_9_Trail

This was a beautiful easy walk. Shady the whole way. Not too much traffic. Parking was not a problem at 10am.

(Leisurely bike rider here) If you like more of a woodsy atmosphere you will appreciate the tall canopy of tree leaves keeping things cool and shady on this nicely paved trail. I started out by the Trolley Stop restaurant and pedaled East / North about 1 mile towards Catonsville. It’s lightly uphill so a bit of a workout but not bad. Where the trail crossed Oella Ave., I went one block west and found a bodega / country store where I got an ice cream cone and they also had sodas and snacks. The trip back on the trolley line is literally all downhill and it was wonderful!

This is a pleasant trail more fitted to walking than biking, although there are some road shoulder lanes for bikers which allows for a longer ride. It is peaceful, although we walked it July 3, 2016, and there were plenty of other strollers going to-and-from Ellicott City. A nice way to limber up and get outside on an afternoon. And, you can stop in Ellicott City for a coffee or lunch. We came down from the Edmondson Avenue side where there is street parking. It is near the Catonsville Elementary School. Of course, you can depart from Ellicott City and walk the other way. You have to find the stairs up to the trail which are near the The Trolley Stop just over the bridge past the RR Museum.

The trail is a great way to recreate during a hot summer day: it's well shaded and the stream alongside the trail (albeit down a short but steep ravine) offers a few pools for dipping your feet. Ellicott City is a charming town, too, and this trail just adds to its amenities. When you get too hot from strolling the town streets and window shopping, head for this lovely trail just over the Patapsco River.