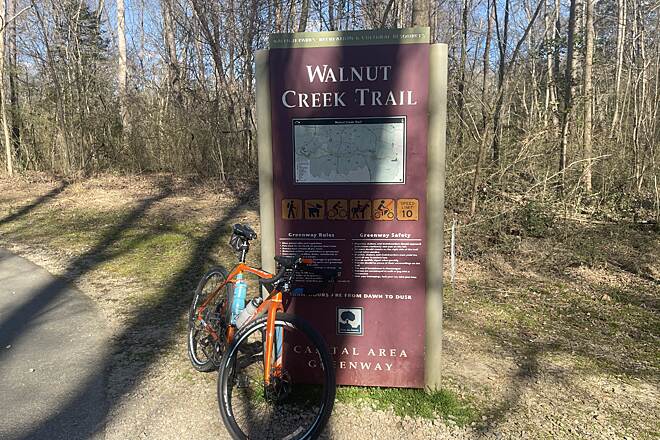 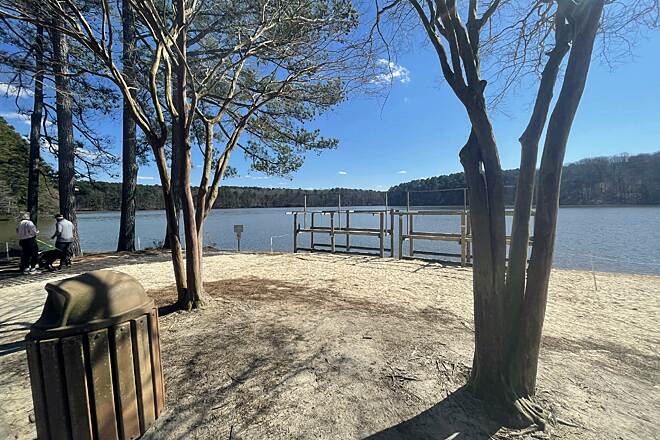 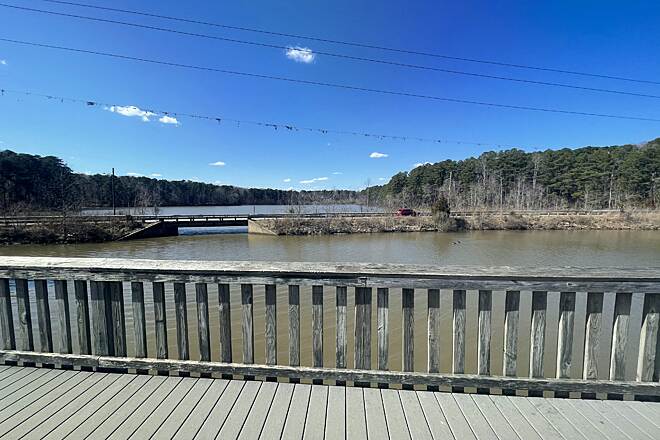 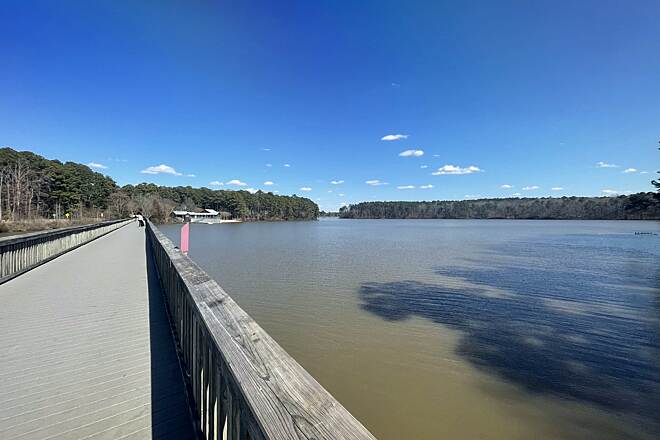 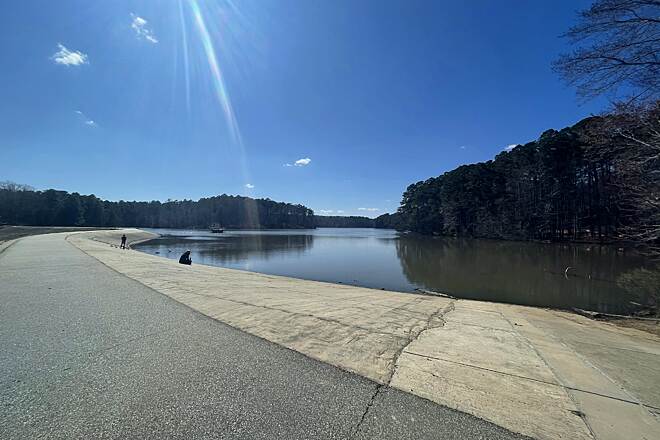 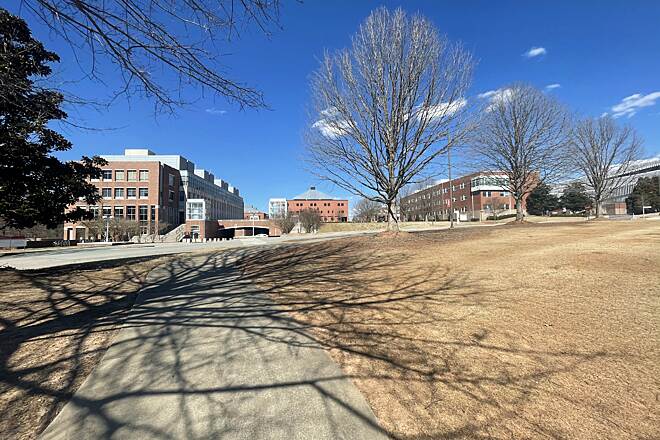 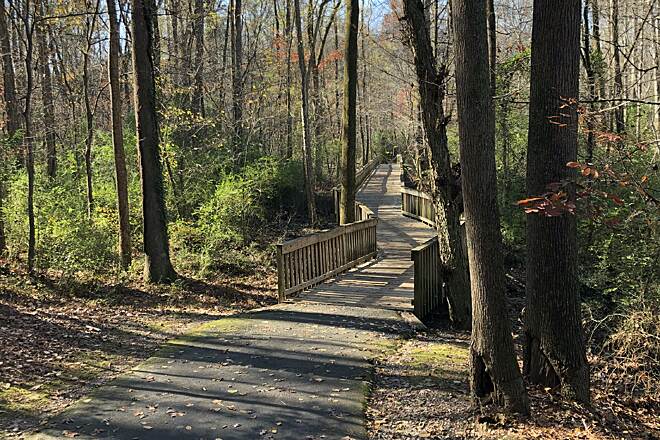 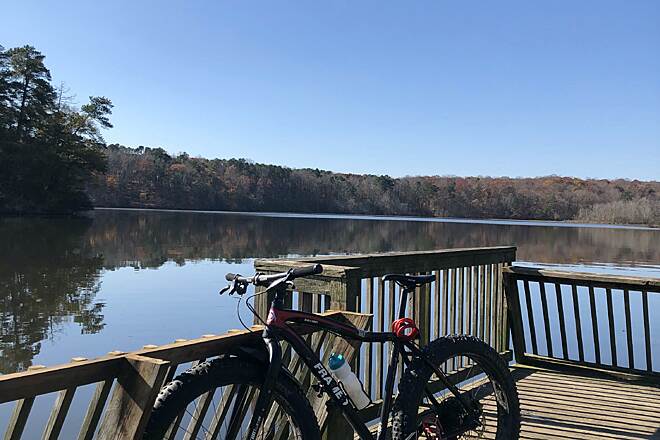 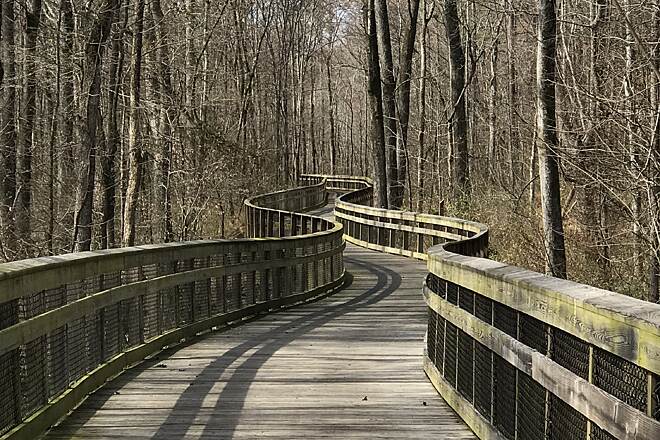 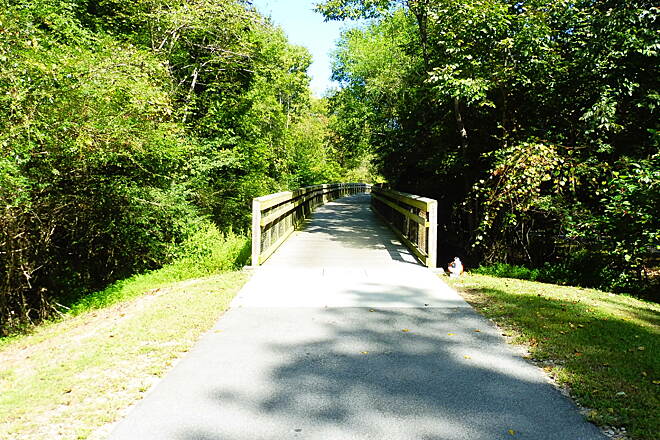 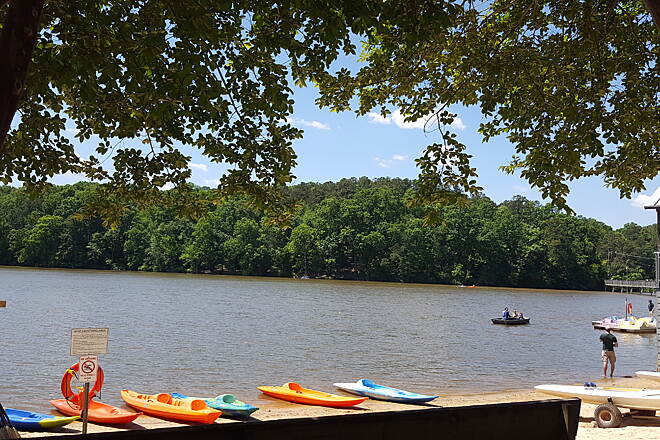 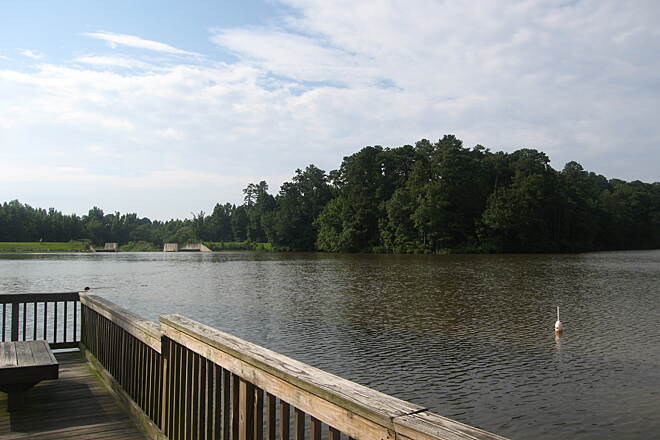 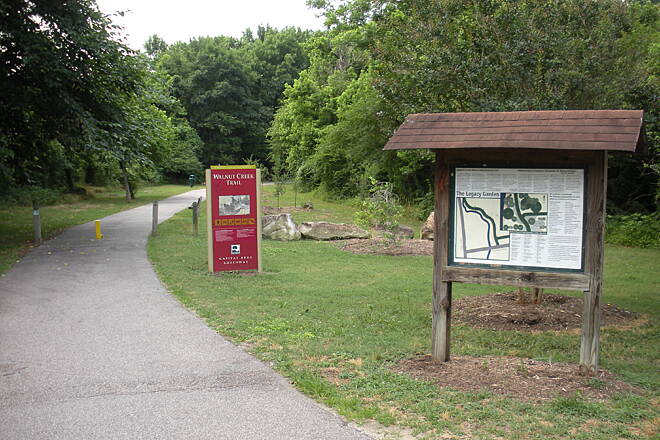 The Walnut Creek Trails spans more than 19 miles on an east-west route through Raleigh. Only its western end, through Lake Johnson Park, is unpaved.

Increasing its value for both transportation and recreation, the Walnut Creek Trail links to other trails in the area: Rocky Branch, Little Rock, and the Neuse River Trail.

Very nice scenery. Mostly flat with some nice little hills at Johnson Lake. Thoroughly enjoyed the ride! Hope to be in the area again sometime to ride it again.

Great trail for new cyclists. Not intimidating and enough natural elements to get you use on the bike. Inclines to practice braking and getting use to riding at high speeds. I will be back.

My neighbor and I have ridden the entire WCT from Lake Johnson to the Neuse River Trail and back a dozen or more times. It’s fully paved and twists and turns along Walnut Creek. Much of it is shaded. We’ve found it to be less congested than the Neuse River and American Tobacco Trails. The trail is generally well maintained. The signage leaves a bit to be desired - but with almost everyone carrying a smartphone it’s easy to find your way if you take a wrong turn. One word of caution - stay away after a rainstorm! The trail has dozens of boardwalk sections that literally become slick as ice when damp. My neighbor and I (both seasoned cyclists) have each fallen on the wet boardwalks. It’s easy to see lots of scarring on the boardwalks, particularly on the curves - from pedals and chainrings making contact with the wood when someone crashed. I wish the city could apply anti-skid coatings of some kind - particularly where the decking is scarred. Also, after a major rain storm, the longer tunnels and several sections of the trail become covered in silt, in some places, 6 inches deep. It’s a bit nasty riding through a dark tunnel through 1 or more inches of slick, sucking mud. The city does a pretty good job clearing things up, but it may be several days or even weeks before they get to the whole trail. All things considered, it’s a pretty good trail. I will continue to ride it unless I seriously injure myself on the boardwalks.

"No lights" in the tunnel why?

Rode the entire trail in 4/2/2020. I didn’t see any part of the trail that was crushed stone, though there is a section of wooden decking on the ground at one point. There is a detour at Worthdale Park to Sunnybrook Road, but the old detours closer to Lake Johnson are gone. The trail is hilly in spots, but the tunnels and boardwalks are fun. Lots of beaver activity and other wildlife. Anderson Point is only a short distance from the end at the NRT. It makes a good resting place.

Rode this trail today. Started at the Avent lot at Lake Johnson. Unfortunately they are doing some sort of construction there that involves part of the trail so almost immediately we were forced on a detour of about 2 miles of just sidewalks up and around Lake Dam Rd until we could get the trail again. The trail is nicely paved and partially wooded. Very enjoyable to ride. Love the marsh bridges and tunnels. Adds some fun variety to the ride we hadn't experienced on any other trail. Also loved area at Lake Raleigh. Definite photo op!!! My only "complaint" would be that the trail is not well marked when it hits Water Works street and the Rocky Branch trail. We lost the trail on our way out at the water works area and some other bikers helped us get straight and then on the return we somehow ended up on Rocky Branch Trail instead of Walnut Creek. They may merge as one but we didn't know and didn't have extra time to hope they did so we used the traillink map and took a street to get us back to Walnut Creek Trail. Hope to come back and ride again sometime. Had about 5 miles to opposite end but had to turn to head back (time crunch) so missed riding the long marsh bridge which would have loved to have done.

Surprising Beautiful for an Urban Trail

I rode the Walnut Creek Trail in Raleigh, NC today. For an urban trail, it was quite beautiful with relatively few road crossings. Since it is part of a trail network, it was often confusing which way the trail proceeded. I had a particularly hard time finding the starting point from the Lake Johnson trails where I parked. I learned that my Traillink website subscription on my phone would show my GPS location on and a few times near the trail when I made a wrong turn. There was one point where the trail was supposed to be according to the map and GPS where it simply ended. Thanks to the app, I was able to connect to another trail just north of the abrupt ending that quickly connected back to the Walnut Creek Trail.

The trail was 15.5 miles long, but I covered a touch over 34 (out and back) looking for the western end and with the wrong turns. There were also some elevation changes. I wish I had put road tires on the gravel bike. The trail guide said there was 2 miles of gravel, but I found no gravel. I saw a very large doe cross the trail near the NC State Campus, go figure, and 3 fawns once it went back in the woods near Lake Johnson. The underpasses to avoid the highways were treacherous. Crazy 90 degree turns. Glad I was not on the tandem, they would have been very difficult. I give it a 7 gear rating on a 10 gear cassette.

We biked from Worthdale park east to the Neuse river trail. Beautiful well maintained and a little hilly. This section is 5 stars. We then went 4 miles or so west ,after struggling to find the street connection , and it was a little more dated , not quite as wide, and in need of some cleaning but pretty nice. We rated this section a 3+. Well worth a visit.

I stumbled across this trail by accident, while out riding my Trikke, while taking a course at NCSU.

The paved portion now runs about 15 miles. The map here on the Traillink site needs updating.

A definite must do for the riding enthusiast. The best way to access this trail on the upper end is to park at the Poole Road access to the Neuse River Trail and ride south a short distance to the trail. After passing under Barwell road and crossing an interesting span over Walnut Creek this trail will lead you through extensive wetlands. The most interesting feature in this section is the 1 3/4 mile continuous boardwalk through the swamp around the Maybrook Subdivision. Worth the trip and an easy ride.

Raleigh's rail trail system is amazing. We stayed downtown and were able to pick up the trails within a few blocks from our hotel. The Rocky Branch Trail is located on Fayetteville St. and the Walnut Creek Trail is on South Wilmington St.
We rode 40 miles, with close to 95% of it being off road. Some of the street connections were difficult to find. However, other cyclists were able to give us directions or lead the way. There is an extensive map available at the visitors' center at the Marriott; however, we didn't find the insets (which are supposed to direct you to the connections) particularly helpful.
If you take the Crabtree Creek Trail, there's a section that becomes dirt and full of roots for about a half mile. It ends at a staircase. At the top of the staircase, if you ride to the left, you'll find the trail again about a quarter mile down the road on the left.
If you take the Rocky Branch Trail, it comes out on Western Blvd. Cross the street to the prison, go left and ride along Western Blvd., keeping Pullen Park on your right. The trail picks up again by the park.
We found fellow cyclists to be very friendly and helpful. We picked up 4 riders along the way. Riding the trails is a great way to see Raleigh and to meet people.