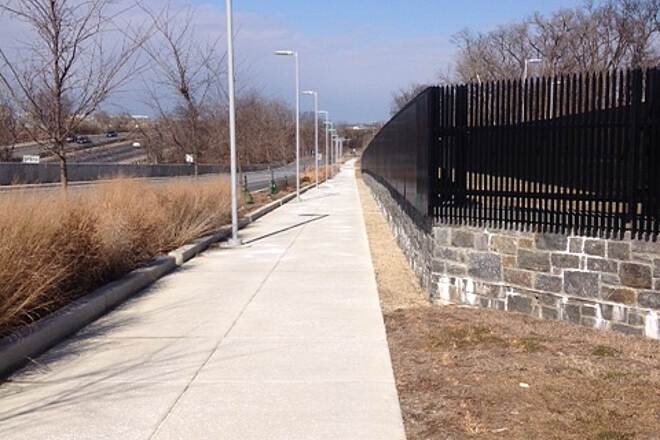 The West Campus Access Road Trail, the newest rail-trail in Washington, D.C., travels through the sprawling former campus of St. Elizabeths Hospital, now set to become the new home of the Department of Homeland Security (DHS). Running alongside its namesake road on the western edge of the campus, the trail provides access to the gleaming new headquarters of the United States Coast Guard, as well as the campus' bus bays.

The trail was built on a former spur line off the Baltimore & Ohio Railroad's (later CSX's) Shepherd Branch. The branch once carried trains bringing aviation fuel to Bolling Air Force Base and chlorine to the Blue Plains Advanced Wastewater Treatment Plant, but in the early 1900s, the corridor was an even busier main line: barges transported loaded railroad cars across the Potomac River to awaiting locomotives in Alexandria on the opposite shore. While service ended on the Shepherd Branch in 2001, trains on the shorter spur to St. Elizabeths stopped running long before then, when coal—the primary heating source for the hospital and only traffic on the line—was replaced with more modern heating methods.

For now, the West Campus Access Road Trail's primary utility is to bring non-motorized commuters from Barry Farm and Anacostia—and eventually a planned streetcar on Firth Sterling Avenue SE—onto the DHS campus, although views of monuments and a historic cemetery make the trail a worthy destination in its own right.

In the future, the trail will be extended along with the West Campus Access Road farther south to a planned terminus at Malcolm X Avenue SE. In the north, the planned construction of the connecting South Capitol Street Trail will eventually allow trail users to head south to Joint Base Anacostia–Bolling and north towards the Washington Navy Yard and downtown DC via the popular Anacostia Riverwalk Trail.