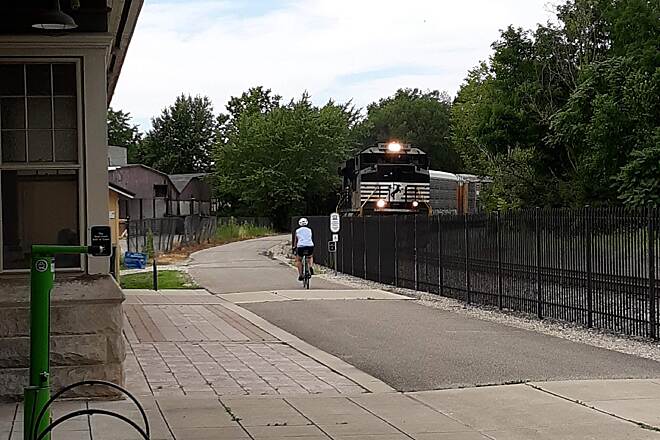 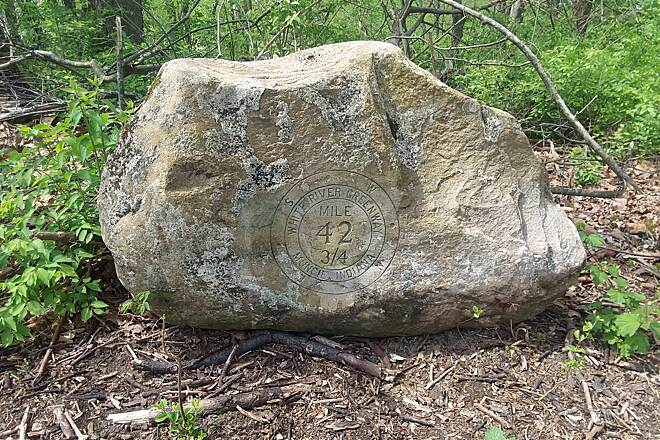 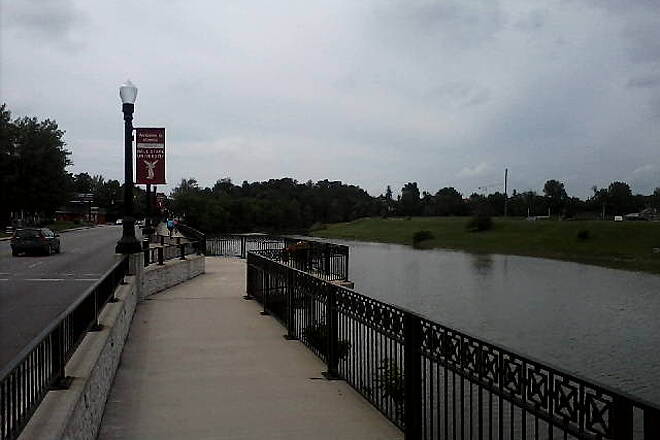 Muncie's White River Greenway follows the course of its namesake river through the city between W. White River Boulevard at W. River Road and N. Gavin Street at Bunch Boulevard. The trail corridor runs through a narrow greenway between the river and urban neighborhoods, passing through several parks. A highlight of the route is the beautiful John Craddock Wetland Nature Preserve on the east end of the trail. Spanning 27 acres, the preserve allows travelers to experience woodland, wetland, and prairie habitats.

In Muncie, the White River Greenway also crosses the Cardinal Greenway, the longest rail-trail in the state and an inductee into the Rail-Trail Hall of Fame.

A great ride along the river in Muncie; slightly longer than the map indicates

The trail has also been expanded since the TrailLink map was updated. It now goes under the railroad by North Gavin St, and continues along the river and some switchbacks before crossing a bridge known as Bridge #85 south of East Jackson Street, connecting back up with the Cardinal Greenway west of the river. This forms a loop option you can take with the Cardinal Greenway and the White River Greenway in Muncie. Technically the trail is closed under the railroad (perhaps they need to add protection for falling cargo from trains?), but with a very short segment on Bunch Boulevard, you can bypass the closure and get right back on the trail on the opposite side of the tracks.

This trail is very scenic of the white river through the heart of downtown Muncie and the Minnetrista.

This trail is very scenic of the white river through the heart of downtown Muncie and the Minnetrista.

Just rode this trail last week. I parked at the Cardinal Greenway lot at the former C&O station at the east end of E. Wysor St. I started on the Cardinal Greenway east to E Jackson St, went across the bridge and then left onto the White River Greenway. The trail was in excellent condition. It is basically flat with a few small grades up to street level. Scenic with some wildlife, mostly birds. A nice stop is Minnetristra, the former Ball family estate. Beautiful buildings and gardens. On the return trip I went back on the Cardinal trail from McCulloch Park to the train station.

This trail is a great extension/connection to the Cardinal Greenway. The trail runs entirely next to the White River, and provides numerous chances to see wildlife along the river. Nearly every time we use the trail we see ducks, geese, turtles, and an occasional crane in the river. There are several streets that all connect to downtown Muncie which you can use to get to several of the outstanding downtown restaurants.

Warning: as you navigate the scenic trail, you will need to keep a constant look for the ever-present geese who are a constant presence along the trail and the "calling cards" that they litter the trail with!

The best thing in Muncie

...or maybe one of the only good things. I lived in Muncie for a year during an internship. It's not much. However, the White River Greenway and the Cardinal Greenway are jewels that made it bearable. I lived just a couple of blocks from the restored train station and used the trail to commute to work. The WRG ended at the time at a sweet little 50s diner that had a jukebox and Elvis specialities on the menu. The Cardinal Greenway goes through the Ball Estate (think jars) with its historic homes and lovely gardens and then runs along the river. Altogether pleasant and fairly well maintained. They did not have visible police presence when I was riding it so it got a little iffy at dusk. Other than that, I rode it by myself and loved it. Well maintained!

Where the heck does it start?