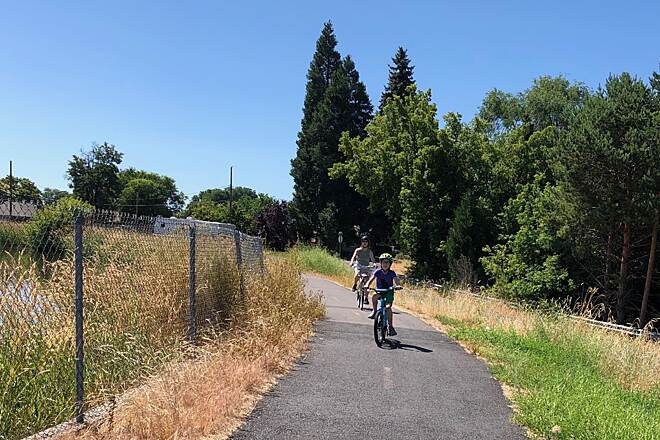 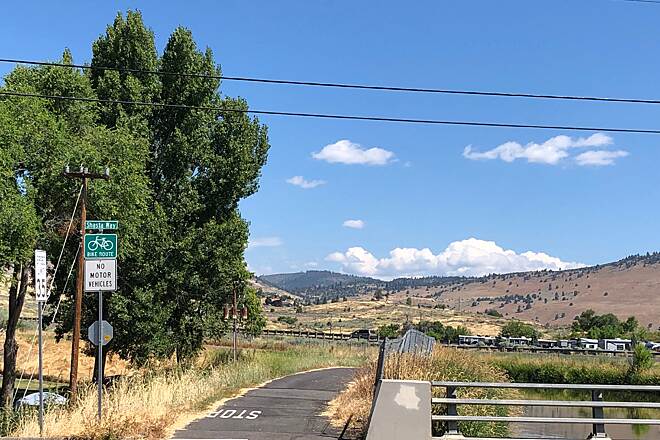 The A Canal Trail offers a pleasant, paved route of just over 3 miles that connects the communities of Klamath Falls and Altamont in south-central Oregon. Traversing both urban and suburban settings, the trail parallels the Klamath A Canal, built in the early 1900s by the Bureau of Reclamation. Along the way, the trail provides access to several schools, parks, and the YMCA, offering a convenient commuting route.

Near its southern end, travelers can pick up the OC&E Woods Line State Trail to go a whopping 109 miles northwest through rocky terrain and the beautiful backcountry of Fremont National Forest.

The best way to get to the ballpark

Klamath Falls is consistently overshadowed by our neighbor to the north (Bend), and for good reason. Bend is the gem of central Oregon. For some reason our city planners, and citizens don't want prosperity. We discourage growth, investment, and quality of life. For a guy such as myself however the living is easy. No traffic, low property crime and easy access to wilderness.

All that being said I am impressed with our trail system. In the last 11 years I have been learning just how great my city is for the ease of biking, hiking and X-C skiing.

I regularly use the A Canal trail to get to the south east part of the metro area. This trail takes you from Esplanade street clear down past the fairgrounds and the ballpark and then continues south along the canal system into Glenwood. You will intersect OC&E Woods Line Trail (Oregon's longest linear park) in this section

A spur path at a street called Patterson will keep you off the road beyond the Steens Sports Park, an incredible facility that houses a full size indoor soccer field, multiple outdoor soccer fields, baseball fields, an indoor batting practice facility, and what was ranked the third best skateboard park in the United States by Transworld Skateboard Magazine.

This spur also safely and easily allows riders and hikers to access the splendor of Hogback Mountain, a butte with vistas of the Klamath basin, Swan Lake basin and the Cascades from Shasta to the Crater Lake Complex.

North of Esplanade, there is a short section without bike priority along a parkway (hwy 39), but one can avoid peril by crossing the parkway at Esplanade and simply moving one street east then turning north for a few blocks. Soon you will find another path that cuts through Kit Carson Park. This will take you one mile north to Campus Drive. From here there are well marked bike lanes in the road. If you go east you will end up at OIT Campus, if you go west you will Cross the 39 again and travel on Biehn Street to Oregon Avenue and down to where Upper Klamath Lake becomes the Link River.

One can descend the Link River Trail back to Downtown Klamath Falls at this point and hook up with the Klamath Basin Birding Trail.

Another option is to follow the bike path on what is now Lakeshore drive (don't ask me why or how it changes name, I think it is a city to county thing), to Moore Park. Possibly the finest and most underutilized city park in America. Within the park are many, many miles of smooth singletrack and incredible solitude. The Klamath Ridgeview Trail cuts across the park on a gentle contour and makes a steep descent to Lakeshore Drive just a few miles from a paved path that takes you to the network of paths and roads that is the Running Y Ranch. At Running Y there is the Bill Collier Ice Skating facility that is open to the public from mid November to mid April.

I recognize that I live in paradise, and because I live mere minutes by bicycle to Moore Park am a child of privilege. Still I yearn for the shelved Pelican Butte Ski area, and the completion of the extension of the Klamath Ridgeview trail all the way to Crater Lake. Those two things would change the game in our area. There is simply almost too much potential.

Klamath doesn't want any of it in spite of the fact that Mt. Bachelor generates 350 million dollars for Bend every year and it shows in the quality of the infrastructure and improvements.

It is puzzling...but at least I can ride my bicycle without fighting traffic to enjoy a baseball game.

I encourage folks to stop by this hamlet I call home and ride, hike, ( or X-C ski when the drought ends...we are in year 4). Klamath falls has a lot to offer. From Weed, California where US97 diverts from I-5 it is exactly the same distance to Portland, and when it is snowing it is an easier drive. Just ask a trucker.