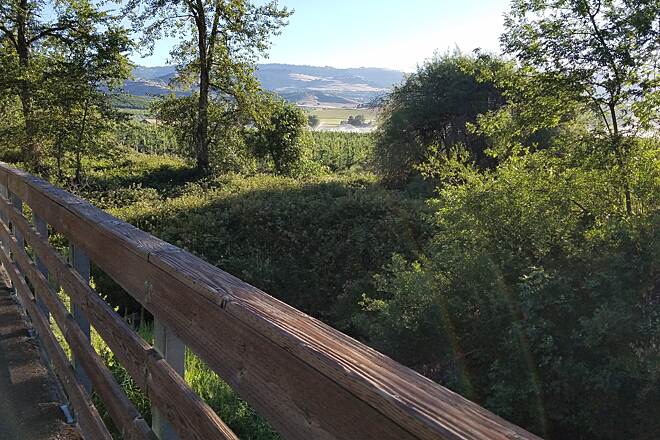 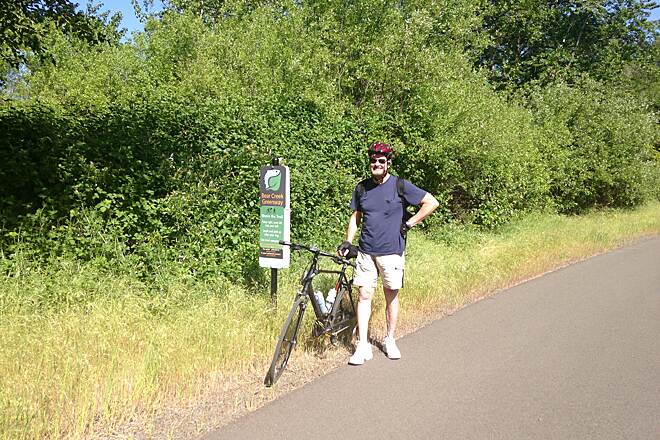 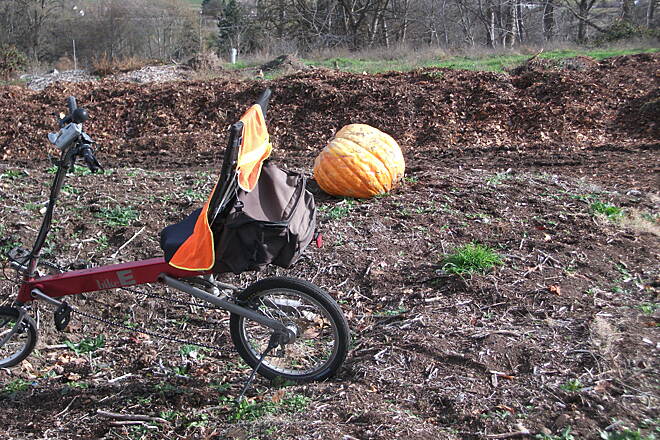 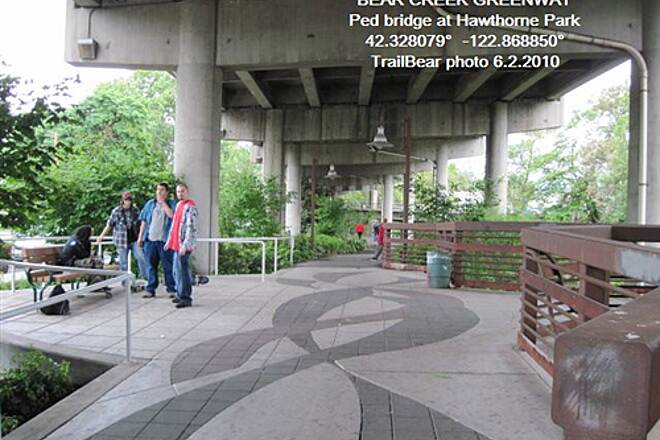 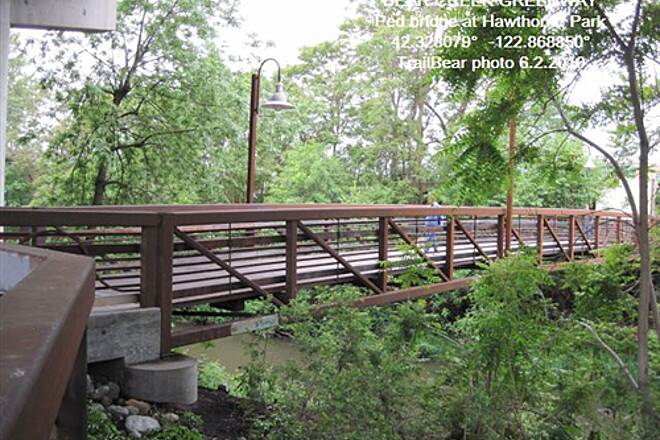 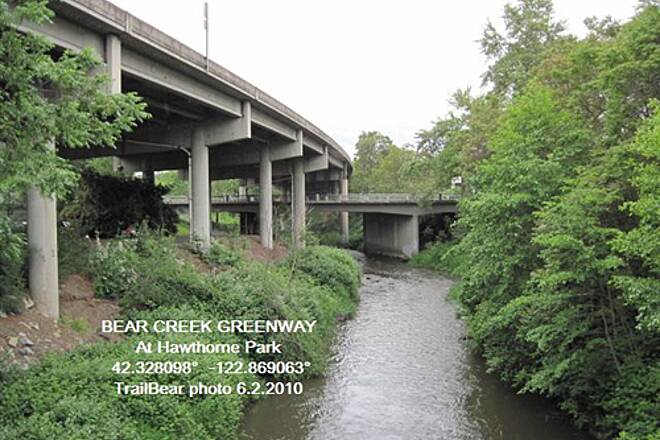 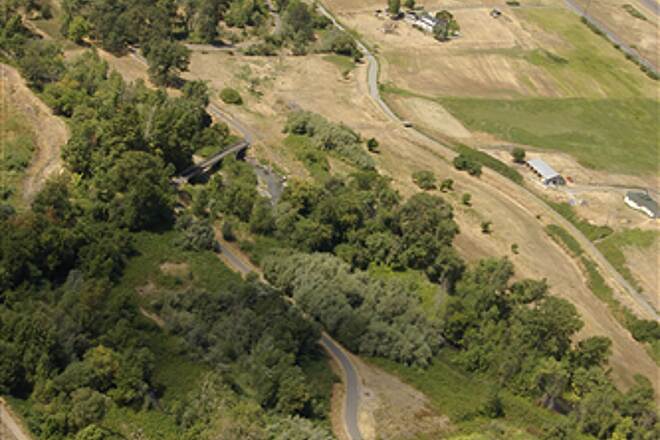 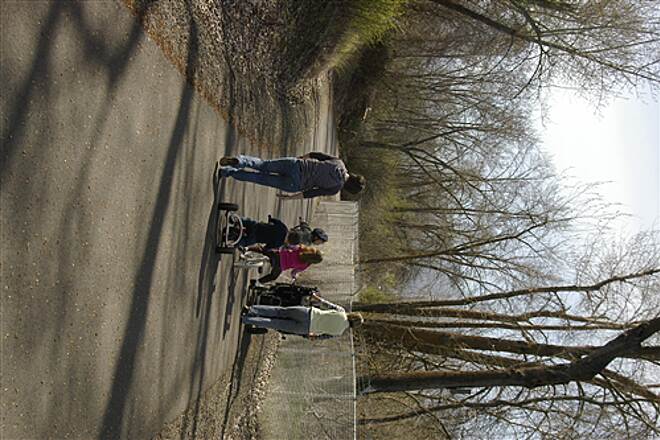 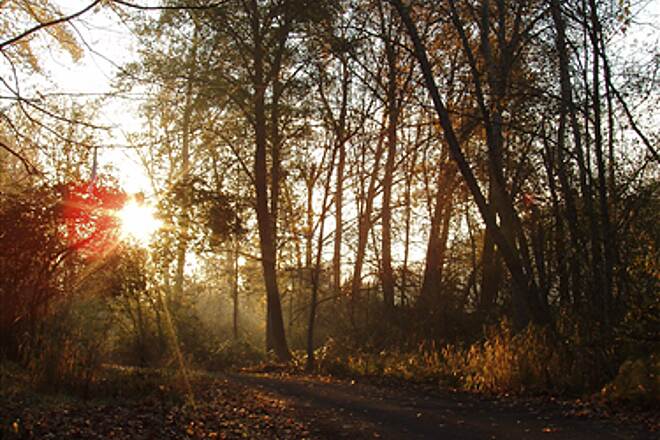 The Bear Creek Greenway is an 18.5-mile paved multi-use trail that travels through creek-side woods and natural areas, connecting five communities and eight parks along its course. The main portion of the trail runs for 17.5 miles from Central Point, through the heart of Medford, to Ashland. A 1-mile section of trail recently opened north of the Jackson County Expo/Fairgrounds. Plans are in the works to join the disconnected trail segments with a path through the Expo property in the near future.

The greenway provides a serene place to exercise, bird watch or simply enjoy a quiet escape to nature. Benches located along the trail offer a place to sit and relax. Walkers, joggers, bicyclists, skaters and wheelchair users are all welcome, and horses are allowed on designated portions in Central Point and Talent.

The trail is louder in some places where it follows Interstate 5 and State Route 99. Some of the notable parks along the route include Bear Creek Park and U.S. Cellular Park in Medford and a popular dog park just north of the southern terminus in Ashland.

There are many places to access the Bear Creek Greenway. In Ashland, take Exit 19 from I-5 and turn south on Valley View Road towards Ashland. Go left on Eagle Mill Road; there is a trailhead near the corner of Eagle Mill and Valley View. In Talent, access the trail from Lynn Newbry Park, just off of I-5 (Exit 21) towards Talent. In Phoenix, access the trail from Blue Heron Park, located on the south end of town, just east of Oak Street and SR 99.

In Medford, access the trail from U.S. Cellular Park, Bear Creek Park, Hawthorne Park or Railroad Park. In Central Point, the trail can be accessed just off of I-5 via Exit 33. Go east on Pine Street, then north (left) on Peninger Road. There is a parking area immediately on the right at the corner of Pine and Peninger.

Park at Dog Park in Ashland

We started in Ashland (had trouble finding the start of the trail and where to park at first) and rode to Medford and back. I would say about 85% was very enjoyable and nice scenery. The other 15% was a little sketchy, but not enough to recommend against it.

US Cellular Park to South end.

Rode this section today and found it very pleasant. The first two miles have some repair going on and more root heave than the North half. The trail detours at Fern Valley Rd. due to construction but is easily navigated. After the detour, the asphalt is in good to excellent condition with a stretch of new concrete between mile nine and ten. There is much less traffic noise on this half. I would recommend riding southward first when doing an out and back, due to the gradual uphill grade traveling south.

US Cellular Park to north end.

Rode this today and enjoyed it thoroughly. The asphalt is in excellent condition and the scenery is great considering it's urban setting. The trail is completely paved now contrary to what their brochures say.

I would have rated it higher if not for the large amount of traffic noise in certain areas.

If you like coffee, stop at Bad *** Coffee Company. They have 100% Kona which is very hard to find.

One of the best leisure rides with wildlife, creeks and shops to refresh along the way. However it's best to avoid the trail from medford south to central point (too many bums/druggies hang out around there), but medford to Ashland is sublime. I've been riding it over 8 years.

The Greenway has since had major work done on it; there are only about two rough spots on the path near the Phoenix portion. The rest is as smooth as glass. This is a great cycling trail especially if you don't want to deal with traffic during the weekdays to use the numerous backroads in Jackson County. It gets more important as one gets older and doesn't want to deal with cars as much. I am hoping someday the foundation finally gets this Greenway connected with the Rogue River one so that there is a nonstop bike trail from Ashland to Grants Pass.

Transients aren't any bigger a deal here than anywhere else the country. I've never had trouble with them or with other people. And yes, police do patrol this Greenway; I have seen them numerous times. It's no more unsafe than other bike trails in the country.

I rode a portion of this trail today and was apprehensive from reading the reviews but would like to share what I experienced today. I rode to Phoenix from Ashland and had a very nice ride. The trail was not bad really. The few spots that were mark we're okay. It appears sections have been worked on and new cement poured that made it nice. Didn't encounter any transients along the way and going by the trailer park was not bad. A couple of people out on their patios were quite friendly. These folks are doing the best they can with what they got and I admire their efforts. There were several riders out today and very friendly. I don't know what the trail is like beyond Phoenix but the part I did today was pleasant. There were several walkers as well. I hope more folks can share their experiences so that the trail gets used. Yes you do go along a section next to I5 but it isn't that long. The short part on 99 was okay too. No complaints.

I have ridden almost the entire lenght of the trail and I have some words of caution: The trail has been poorly maintained in numerous spots, with tree roots pushing up and creating rough spots. Someone has circled these areas in painted green and as most are in shaded areas, the rider is upon the rough spots without warning. To an inexperienced rider, this could result in loss of control of the bike. More importantly, the trail winds through a park like setting for about a mile in downtown Medford. This is where the transients hang out. These people pose a threat to anyone coming by on a bike: they will not move out of the way; the vast majority are either drunk or on drugs; some are either lying in the bike path or right along side of it; and you will note a varied assortment of beer/wine containers on the path with some broken glass. I highly recommend carrying either mace or pepper spray. When approaching this area, I would recommend you place the spray in an easily accessible area, preferably either around your neck or in a pocket and be ready to use it. If you are female, I would highly recommend you travel with more than one person. As a male, I ride through the area with both hands on the bars and I never ever make eye contact with these people - you are inviting trouble if you do. I am told the MPD mades periodic visits and chases them out, however, I have yet to see any Police presence. On the North end of the trail as it crossed back to the East and follows I-5 North, (I am traveling South to North) there is a bridge crossing a small stream. There is a huge hole in the middle of the bridge that someone has painted in florescent red paint to alert an approaching rider. If you were to hit that hole, it is wide enough and deep enough to collapse a wheel. On the South end of the trail near Ashland be aware of 'goat heads' along the trail. These are thorns that will destroy tires in a heartbeat. In summary, this could be a very nice trail, similiar to the trail along the Spokane River or the Trail of the Cour d'alene's, but its over all condition is not good. I would advise anyone traveling in or around Medford to use the roadways as there are a lot of bike lanes which are maintained and some fabulous scenery through the wine country and orchards.