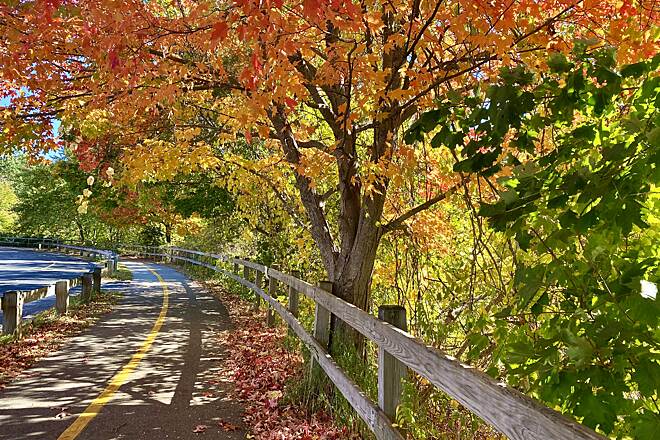 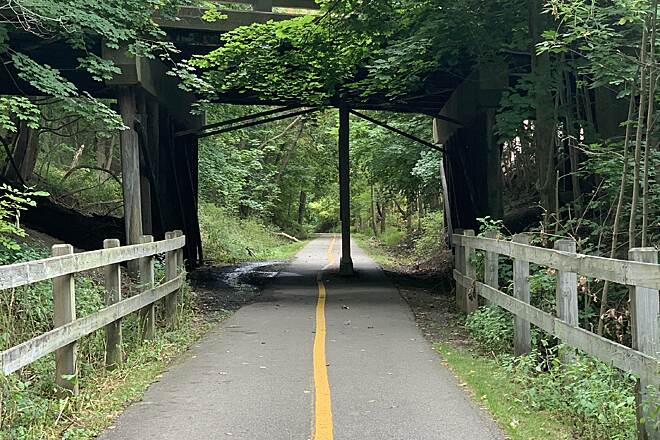 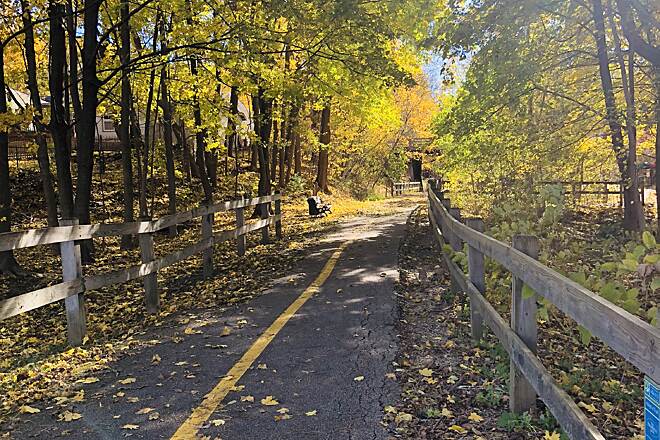 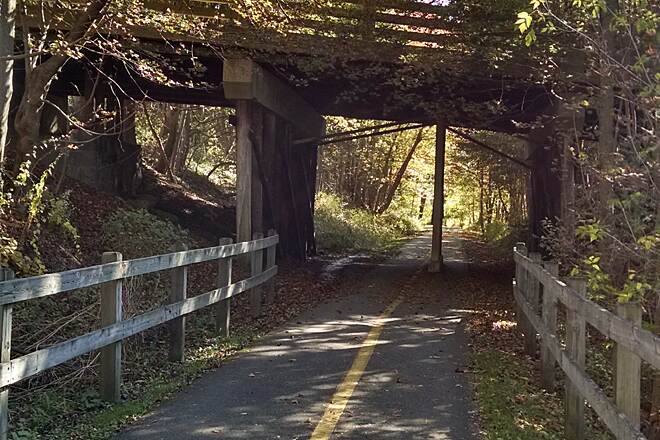 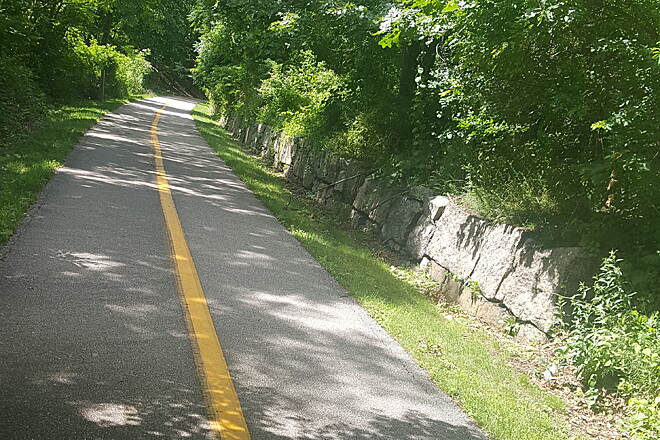 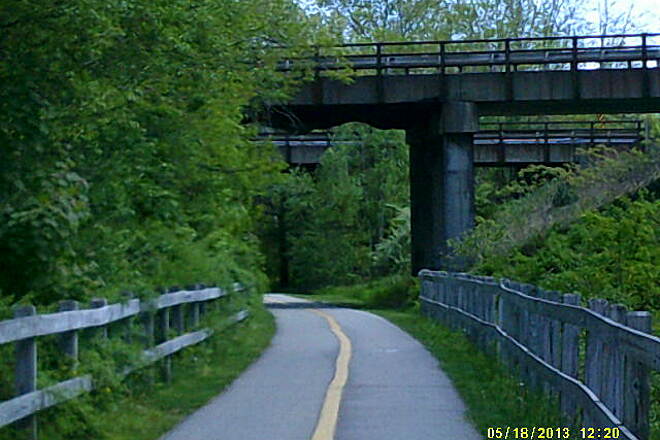 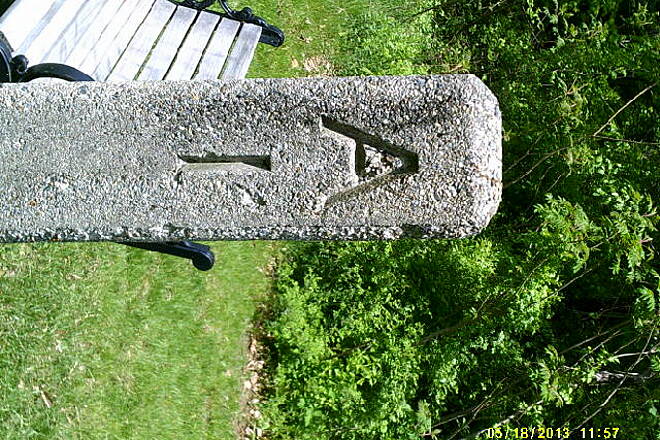 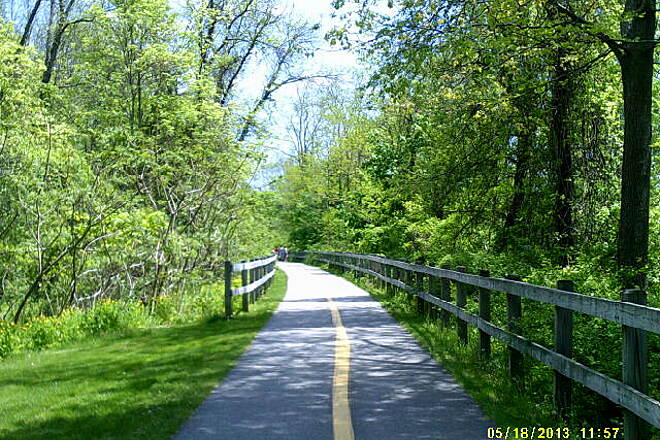 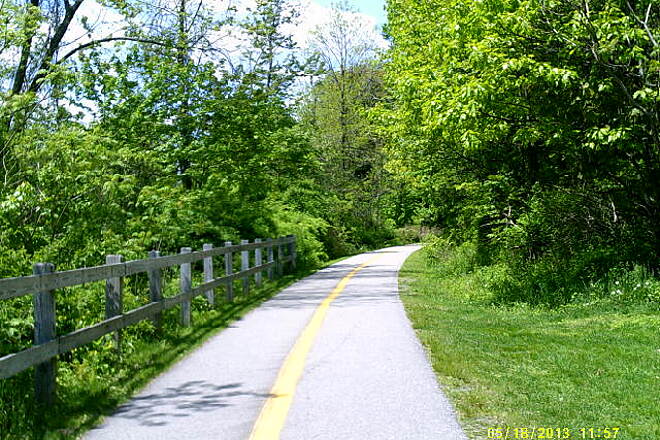 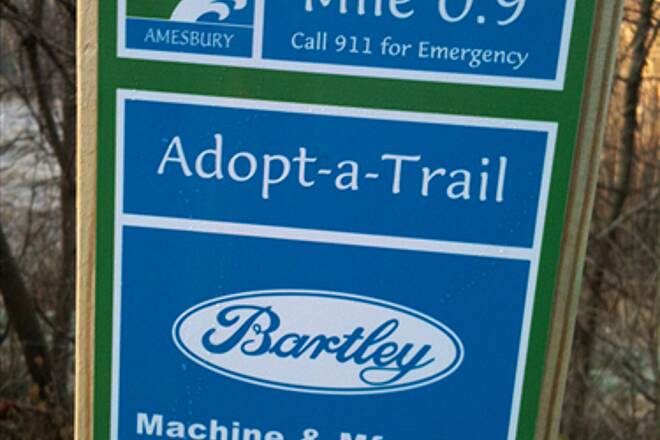 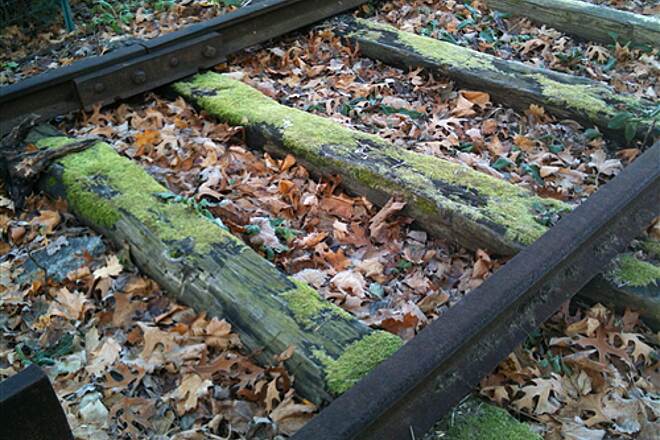 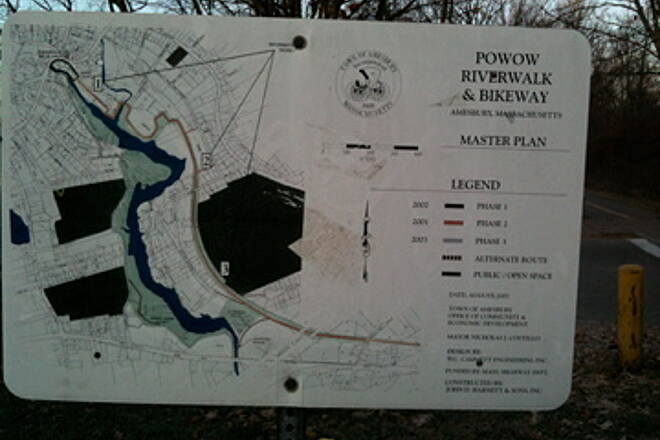 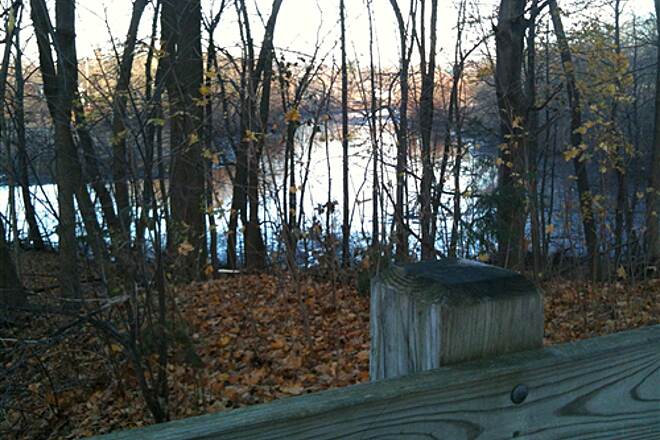 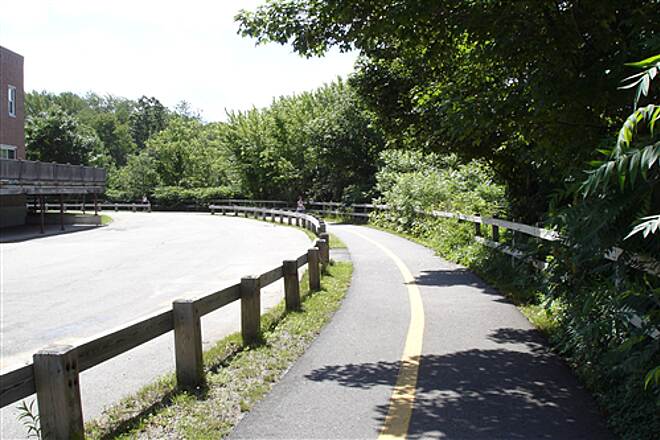 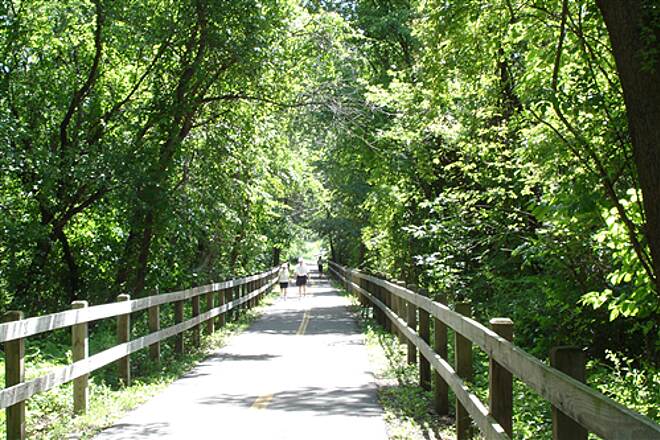 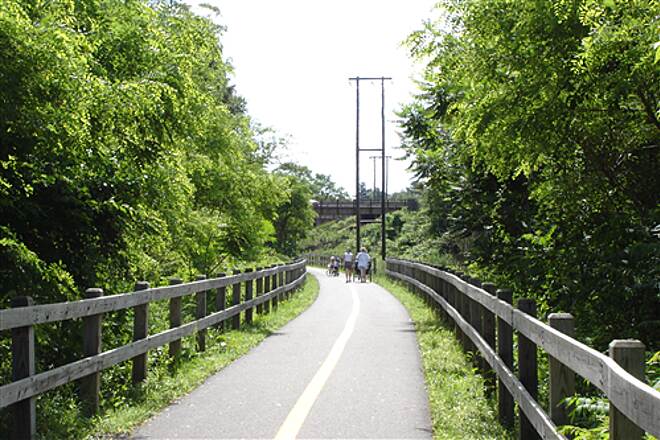 The Amesbury Riverwalk (also known as the Powwow Riverwalk) carries visitors between a resurgent waterfront district on the Powwow River to a modern shopping center on the outskirts of this historical mill town. The 1.3-mile paved trail is part of the Coastal Trails Network, which one day will link several northeastern Massachusetts communities with 30 miles of trail.

The trail follows the Amesbury-Salisbury branch of the coastal Eastern Railroad that began serving the area in 1848. The rival Boston and Maine Railroad took over in 1884 and ran the line until 1972. The city of Amesbury and Coastal Trails Coalition created the trail in 1999. Beginning a trail tour at Heritage Park in the Lower Millyard introduces you to the city’s history as a 19th- and early-20th-century manufacturing center. A parking lot in this redeveloped area provides access to the trail and Heritage Park, as well as to restaurants and pubs in the area.

Here on the Powwow River (a tributary of the Merrimack River), industrialists in the 1800s built a series of dams to harness the river’s power for textile mills. Later on, carriage-making took over as the dominant industry, lending its identity to Amesbury’s nickname, Carriagetown. A fire destroyed many of those buildings in 1888, but the carriage industry roared back, shifting to automobile bodies until the Great Depression.

Old multistory brick buildings next to Heritage Park housed mill and carriage operations but are being repurposed to other uses. Upon first entering the park from Water Street, you’ll see the small Salisbury Point Station, which was built in the 1870s by the Eastern Railroad and relocated here.

Winding through the park, the trail overlooks the Powwow River before an interruption for a bridge across Back River on Water Street. (Use the crosswalk to reach the sidewalk on the north side of the bridge, then cross Water Street again to return to the trail.) The trail rolls alongside the river then beneath Oak Street, where it enters a wooded area that surrounds the aged Mount Prospect Cemetery. Here you’ll find the final resting place of Li’l Abner cartoonist Al Capp, among others.

Passing underneath I-495 and crossing Rocky Hill Road, the trail ends at the Carriagetown Marketplace, a shopping center where you’ll find many opportunities for food and refreshment. The Coastal Trails Coalition is working with local and state agencies to finish a trail network linking Amesbury, Salisbury, Newbury, and Newburyport via the Salisbury Point Ghost Trail (less than a mile away), the Old Eastern Marsh Trail, Clipper City Rail Trail, and the Plum Island bike lanes.

To reach the eastern trailhead at Carriagetown Marketplace from I-95, take Exit 58 (from the north) or Exit 58B (from the south) toward MA 110 W and Amesbury. Head west on MA 110/Macy St. 0.4 mile, and turn right into Carriagetown Market-place at the traffic signal. Go about 300 feet and turn left and then right to access the rear of the shopping center. Parking and the trailhead are on the left.

Nice trail, some bumpy parts though

This trail is awesome for biking with the exception of one area that is very very bumpy and uneven. Otherwise it’s a great paved trail. My only other complaint would be that it’s too short!

My fiance and I always see this trail from the on-ramp to 495 from 110, so we decided to walk it this weekend. It's a nice mile or so walk, nice foliage, and at the end goes behind some pretty nice houses. We're looking to buy some bikes, so hopefully we can make a habit of biking this and the other area trails!

We biked this trail as a loop connecting to the Clipper City, Ghost, and Marsh trails. They are planning a connection between this and the Ghost trail which will be excellent when it happens because there is no good connection now. The trail was in good shape and was very pretty. It doesn't actually go right along the river; even the part that is close to the river doesn't have wide open river views because of foliage. If you were expecting lots of river views you would probably be disappointed but if you are looking for a nice stroll through a suburban area on a quality trail then you should be pleased. The village of Amesbury is at the western end of the trail and it is nice to bike through also.

I love biking and this trail is on my top 3! I love it because it is paved and not to long like other trails.

I used to bike this trail regularly when I lived in Amesbury. I moved in 2004. I can't believe they still haven't finished connecting all the trails yet. What's the problem? Lack of money?

The Amesbury Riverwalk was the first completed section of the Coastal Trails Network, linking Amesbury to Salisbury, Newburyport and Newbury, and the Border to Boston Route from Salisbury to Danvers along former trail lines.

Just rode my Trikke (www.trikke.com) on the Amesbury Riverwalk last Sunday at the recommendation of a friend who lives in Amesbury. Nicely paved, 98% clean of debris, pleasant scenery. At 1.3 miles I can't wait till the other connecting trails are added. Will definitely return for quick rides in Amesbury.