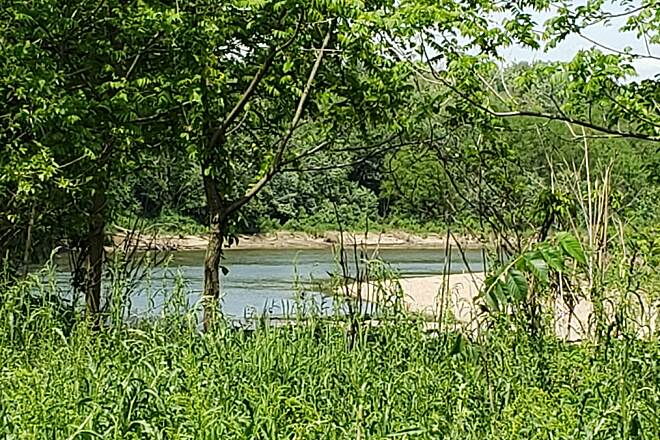 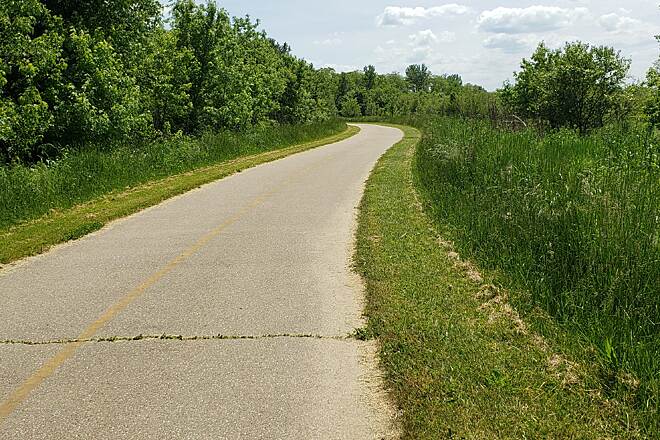 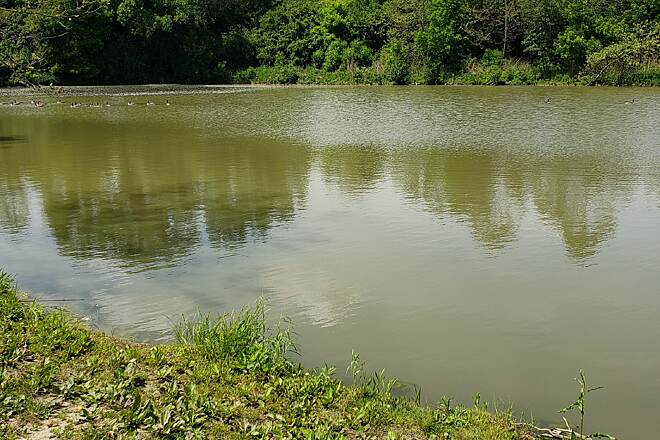 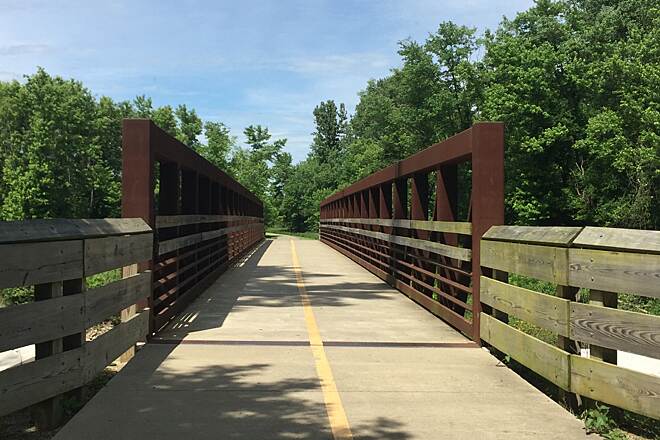 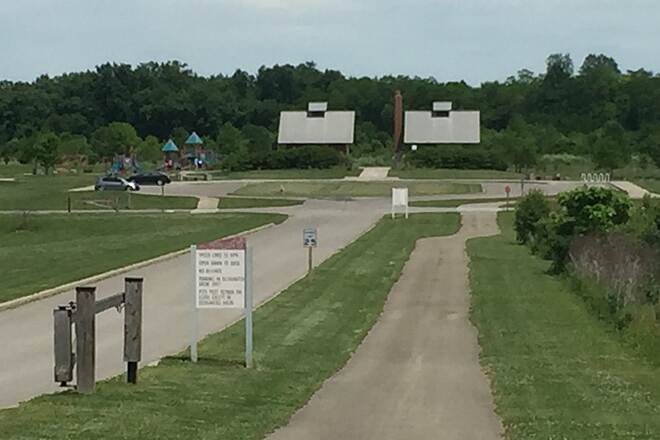 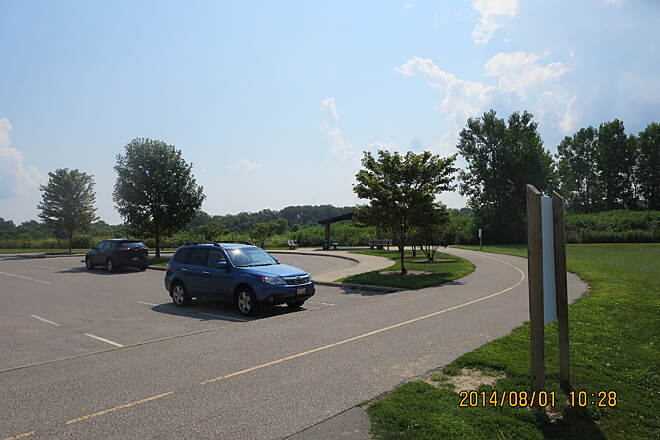 The Armleder Park Trail loops along a wide, paved route through the open meadows of the park, located east of Cincinnati. At the southeast end, you'll find an overlook of the Little Miami River. Within the park's 238 acres, you'll also find offers hiking trails, a playground, picnic shelters, recreational fields, and an off-leash dog park.

Southwest of the park, on the other side of OH 125, you can use the Armleder-Lunken Connector Trail to connect with the Lunken Airport Bike Path, which loops around Cincinnati's municipal airport and connects with the Ohio River Trail.

Adequate for the park.

I rode around the various loop configurations to make sure I covered all the trails and ended up biking 4.3 miles. Maybe doing the outside loop alone would be the 2 miles written in the description. Some of the surface was in better shape than other places. One could go in the woods by the river to hike or bike on non-paved trails. It is out in the open. A playground, central building and a dog park is also within the park.

I was here in the latter part of May and the Armleder-Lunken Connector Trail was blocked off. It said the trail was closed to work on the bridge. I went on Wooster Pike and saw another cyclist, asking him to verify directions to the Lunken Airport Trail. He was heading there, so we went together, but then went different directions around that loop. That was so nice of him.

A Safer Alternative to the Current Ohio to Erie Trail Route

On October 7th, I rode the Airport Connector Bike Path in Otto Armleder Park in Cincinnati, Ohio as part of my southbound Ohio to Erie Trail (OTET) route ride. Officially, this trail is not recognized as one of the trails of the OTET route, but I would recommend it to all who are attempting to ride the Ohio to Erie Trail as it avoids a dangerous traffic circle near Lunken Airport. Having ridden the OTET twice before, I consider Beechmont Circle a dangerous intersection for all cyclists because this traffic circle has a number of buildings and trees in its center which block a driver's view of what is up ahead and around the corner in the circle. Combine these blind curves with fairly high speeds within the circle and the interchange can be hazardous to cyclists. Therefore, I have sought out a way to avoid this intersection all together. My solution is to connect to the Lunken Airport Bike Path or Wooster Road/Wooster Pike (depending on your direction of travel) by using the Airport Connector Trail between Lunken Airport and Armleder Park. If you take this trail you avoid Beechmont Circle completely. This route suggestion of mine should be a temporary route detour. A bridge crossing the Little Miami River to the Lunken Airport Bike Path has been in the works for quite some time. At present, the bridge design is scheduled to be completed by the end of 2019, with construction starting in 2020, and completion by 2021. Let's hope that this timeline can be maintained.

Lovely trail to combine Lunken and the connector trail. Made for a nice ride. Lots of wooly worms, grasshoppers and the fall colors were plentiful. The scarecrow display added to the fun.

Nice trail surprised how easily it floods but I think that makes it an even better wildlife refuge. Lots of birds and not much honey suckel. The connection to lunken is awesome and I can't wait till it ties into more trails. A bridge over the little Miami would connect to the bike trail to Loveland and beyond. A tie into Wason way would allow real commuting.

Last May I once again rode through this park. I have previously ridden through this park twice on journeys along the Ohio to Erie Trail. Using the trails of the park and its airport connecting trail is a good way to avoid a difficult-to-navigate-safely double traffic circle near Lunken Airport where Wilmer Avenue and Wooster Road intersect with Beechmont Avenue.

The Otto Armleder Memorial Park and Recreation Complex is a Hamilton County MetroPark that sits along the Little Miami River and in the landing and flight path of Cincinnati's Lunken Airport. This airport serves primarily private planes and corporate jets and because of this the land the park occupies probably would not be a good fit for residential housing.

The park consists of soccer fields, picnic areas, a dog park, a 1.9 mile biking/hiking loop and a few addition pathways along the athletic fields that can be added to the primary bike/hike loop for variety and additional length. There is also a 1.2 mile connector bike/hike route that connects to the Lunken Airport Bike Path.

This is a nice little park, and riding the primary loop trail was fun but it certainly didn't take very long to complete. Adding in the additional pathways in the athletic fields and taking some pictures took up some additional time but it was a pretty quick ride. If you are looking for a safe, flat pathway to work on speed and distance this very well could be the trail for you. I was here on a Tuesday afternoon and there were only 4 other riders/walkers I encountered. It may be much more crowded at other times or on the weekend. Multiple laps would add to your mileage totals. After finishing a once around all the parks pathways, I took the connector trail and rode around Lunken Airport. Parts of that trail seemed much busier than the one in the park.

A very nice flat trail. Beautiful fields with plenty of wildlife line the path. A fun park for kids to use at the end of a ride. The signage could be a little better but the map at the beginning is helpful.

I ride the Lunken trail and then take the connector under Beechmont ave. into "The Otto". AS soon as one crosses the Duck Creek bridge on the Connector Trail the aroma of drying mud is replaced by the sweetest smell of (apparently) wildflowers. This great aroma is a key to my enjoyment of these two trails. Enjoy!

The loop is only 2 miles long, but the setting is beautiful, an oasis in a rather ugly part of town. The connection to Lunken is complete so you can think of this as a bonus after riding around the airport.

Bike riders be aware of dogs on long leaches / dogs not on leaches. Path leading to Lunken is complete but there is a gate with padlock seperating the 2 facilities. Looks to open soon.

Lots of bugs around dusk, especially after rain.

Very flat and wide asphalt trail. There is one main loop and several cut throughs. Mostly surrounded by meadows, but the far east end there's a Little Miami River overlook. Hope to get out and GPS map this one, the Google maps aren't up to date.