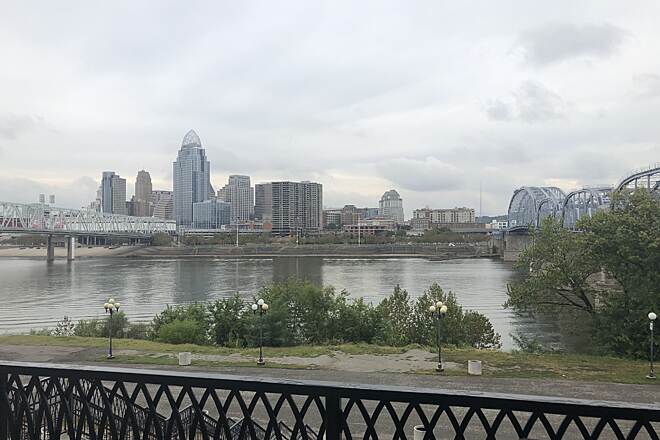 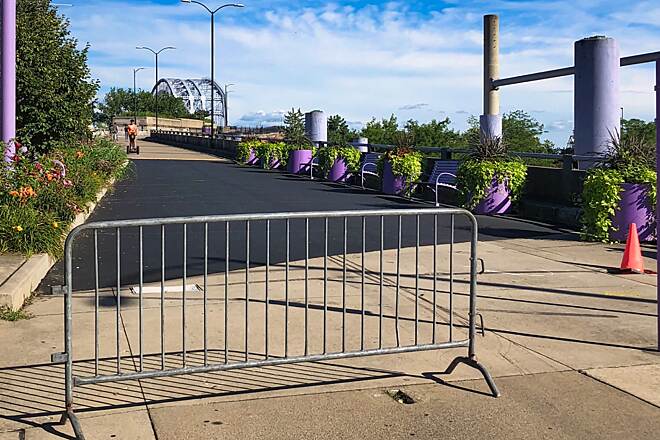 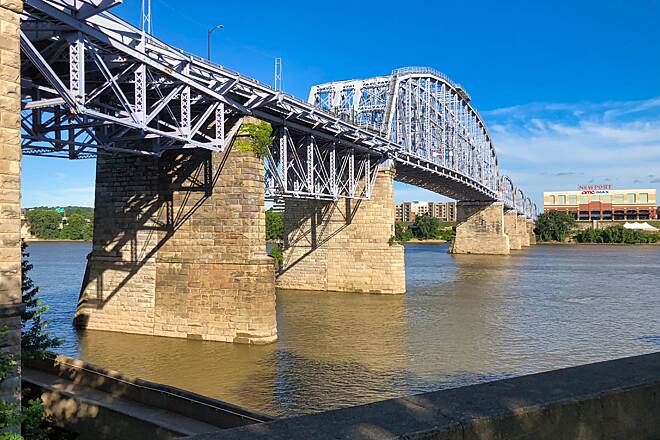 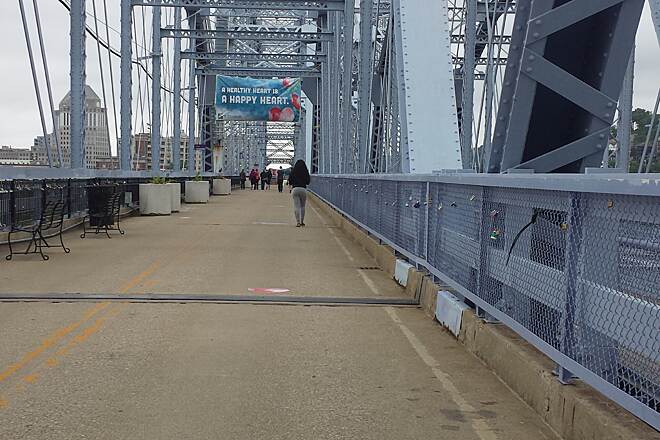 The Newport Southbank Bridge, commonly known as the Purple People Bridge due to its unique paint scheme, links the large Ohio city of Cincinnati with Newport, Kentucky, a medium-sized city rapidly becoming the entertainment hub of fast-growing Northern Kentucky. A $4 million restoration of the original railroad bridge over the Ohio River led to its reopening for walking and biking in 2003.

The Newport Southbank Bridge, as it was officially named after its reopening in 2003, is now the centerpiece of the Newport on the Levee development in Kentucky. The urban renewal project features a movie theater, bookstore, the Newport Aquarium and a host of restaurants and bars.

On the Cincinnati side, the bridge is an integral component of Sawyer Point and Yeatman’s Cove, both offering a variety of recreational amenities along the riverfront. U.S. Bank Arena and Great American Ball Park—home to MLB’s Cincinnati Reds—are a couple blocks west of the bridge approach along the Ohio River Trail.

Parking for the Purple People Bridge can be found in Cincinnati in several paid lots along Pete Rose Way/US 52 or on-street in downtown Cincinnati, a short distance away. In Newport, park in metered spaces on Riverboat Row under the bridge, in paid lots for Newport on the Levee or on city streets in the Mansion Hill neighborhood.

A Must if You Are Riding the Ohio to Erie Trail

If you choose to ride the Ohio to Erie Trail route, especially if you are heading southbound, consider taking one short additional ride on the Newport Southbank Bridge. It is also known locally as the Purple People Bridge because of its lavender color and because it is not open to cars. The length of the trail is listed at 1/2 mile in length, so it will not take you very long to complete even an out and back ride on the bridge.

The payoff for riding this short trail is the opportunity to get some great pictures of the Cincinnati skyline and riverfront. In addition, on the other end of the bridge is the Newport Aquarium, a 20 screen AMC movie theater, and many restaurants and bars.

A Short Ride That Can be Crowded.

Lots of pedestrians walking across this bridge will slow a cyclist's progress. A must ride for southbound Ohio to Erie Trail riders to complete as part of their journey. Nice views of the Ohio River and the Cincinnati skyline. The few minutes it takes to cross and return are worth the effort.

Best option for crossing and ends right beside the Newport aquarium