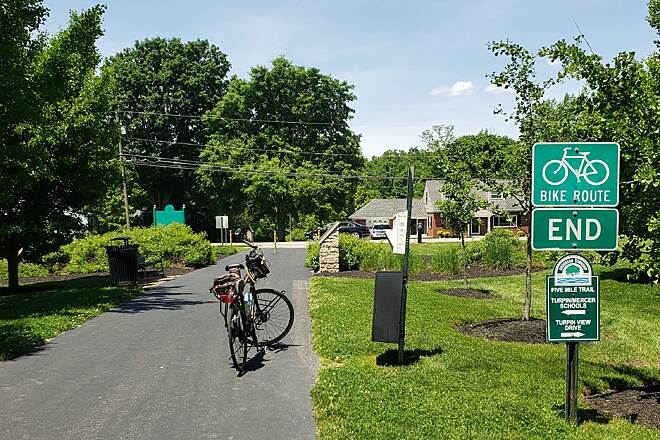 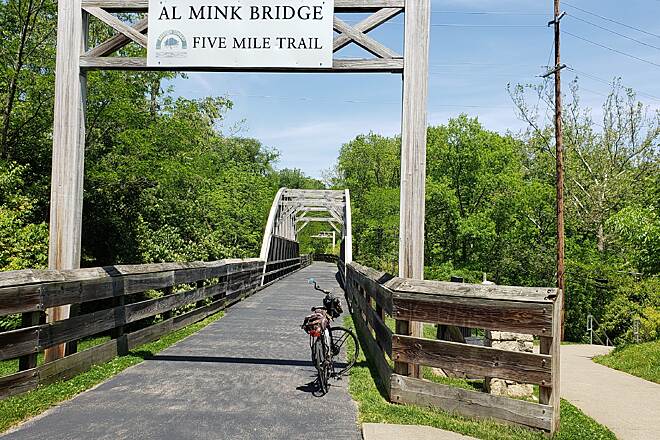 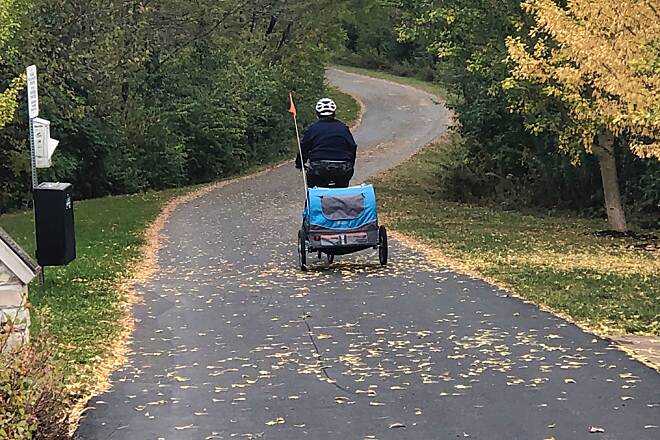 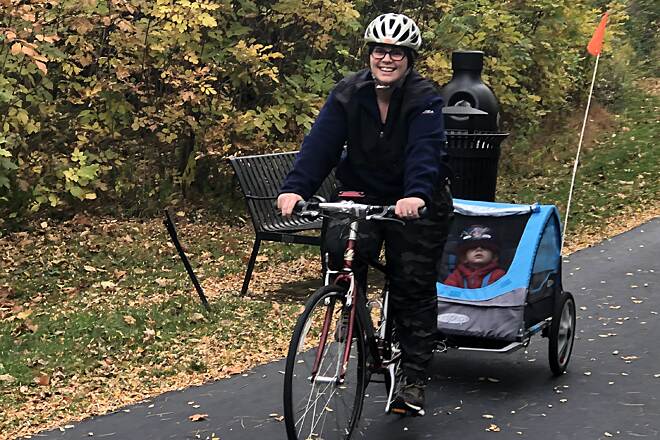 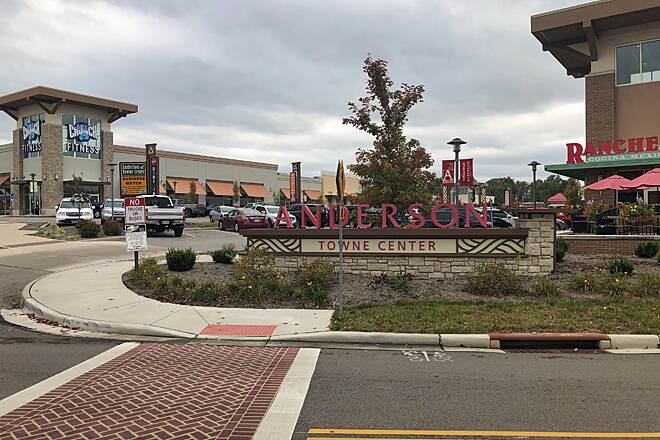 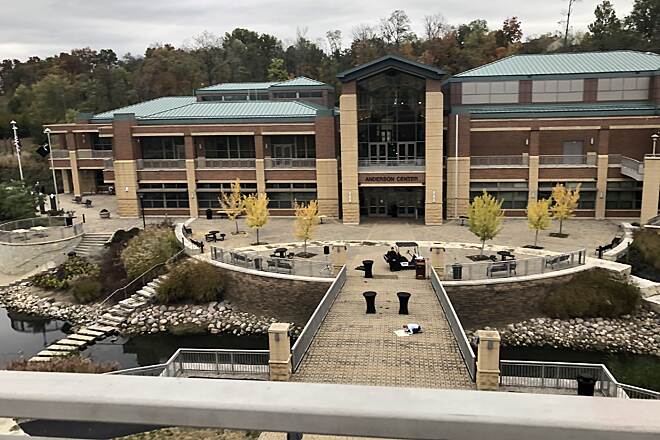 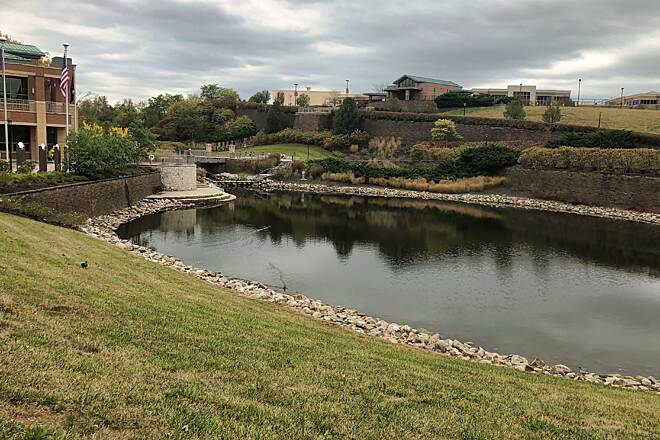 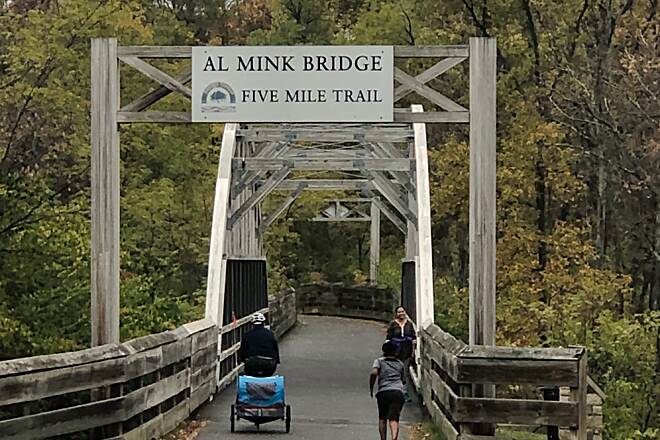 To cover the five miles suggested by the name of this trail, one has to travel out to the opposite end and back again. The trail is located in Anderson Township, about 13 miles southeast of Cincinnati. It's paved surface, convenient location and ample greenery on either side make it the township's most popular recreation trails.  Starting on Newtown Road, the paved trail begins with an elevation gain in its first thousand or so feet, followed by a gentle decline leading to the Al Mink Memorial Bridge over Hunley Road. The name of the bridge honors Anderson's late trail coordinator, who passed away before the completion of this trail.

The trail continues shielded from the hum of traffic and the surrounding neighborhoods by the combination of trees and bushes,  but opens up at Clough Pike, where it begins to parallel Five Mile Road. At State Road, the trail switches over from the west side of the street (and the Anderson Branch Library) to the east side, where it enters the campus of the Anderson Health Plex. The off-street segment of the trail ends near the building, and a signed on-street lane directs pedestrians and cyclists to a short, off-street segment and the trail's conclusion at the Anderson Center, the township's community center and events space.

At the north end of the trail, parking and restrooms can be found on Newtown Road beside (but separate from) the Heritage Universalist Unitarian Church parking lot (church's address is 2710 Newton Road). At the south end, find parking at the Anderson Center (7850 Five Mile Road).

Nice trail, but it is hilly

This is a nice trail with a good paved surface, but no matter which direction you go, you will encounter some hills. It would be a good starting point for hill training, since road traffic would not be a problem.

I started at the southern end of the greenway near the Park and Ride area by the bus terminal (7832 Five Mile Road). This was at the top of the hill, so the ride began with a nice decent. Just keep in mind that you have to go back up the hill when you return to your vehicle. It's about a tenth of a mile long. When going north, the trail goes past a medical complex before it crosses to the west side of Five Mile Road, where more bushes and trees line the route.

After getting to the northern endpoint at Newtown Road, where restrooms are located, I turned around and made the return trip. That hill is more of a long and steady climb. I did take the loop around the Anderson Center and had to wait until 2 families of Canada geese and goslings crossed the path. I started again, but a little too soon, since one parent really hissed at me.

Being able to hop on and off the trail at various places is a good plus for the area. The round trip of 5.15 miles took me about 30 minutes, which included time for photos and the geese crossing.

A Pretty Little Trail With a Couple of Challenging Hills

The Five Mile Trail is a paved greenway that runs from Newtown Road near Turpin High School in Turpin Hills to the Anderson Towne Center Mall in Anderson Township. The trail is named not because of its length but rather for the fact that it travels along Five Mile Road for most of the trail’s southern half. This 2.5 mile long path is paved and the northern half is quite scenic. I encountered a number of cyclists and pedestrians during my time on the trail and had I started earlier in the day and had the sky not been so cloudy I think I would have seen even more people out using the trail.

However, I would not recommend this trail to any novice cyclist or any family with young children looking for a bike outing. My reason for this warning is because there are a number of challenging climbs on this trail. The first one comes immediately if you decide to travel north to south on the trail. Beginning at the Newtown Road Trailhead in Turpin Hills you have to climb for the first .70 miles. You rise 115 feet in elevation over that span. It’s a tough way to start out without a warm up. (It was a great way to finish on the return trip, except for almost hitting a deer coming around a turn on this downhill just before arriving at the trailhead.) The second challenging climb is over a hill found between Clough Pike and State Road. It really doesn’t matter which direction you are traveling with this hill. You have to climb 60 feet of elevation over .30 of a mile heading south, and 40 feet of elevation over .20 of a mile heading north.

On the southern end of the trail you don’t so much find a trailhead as much as you find 2 venues where you can find parking. First is the Anderson Center, which is the conference, meeting, and events center. As the Center’s website points out it is a place for wedding ceremonies, wedding receptions, special occasions and meetings & conferences. The second venue is Anderson Towne Center Mall. Plenty of retail and plenty of parking.

Overall I enjoyed this trail, however, I didn’t expect it to be as hilly as it was. Again, probably not a trail for novice or young riders. Finally, in addition to the hills, there are two road crossings that require you to wait for crossing signals. Again, perhaps this makes this a trail for young cyclists to avoid. Perhaps if you are looking for a trail in which to do hill climbing training this may be one for you. Finally, I would like to suggest to the Anderson Township Trustees that they should consider trying to raise funds to connect this trail to the Little Miami Scenic Trail near Clear Creek Park. I suspect that my proposed extension would end up being as hilly as the current trail, but it would increase the utility of the trail by creating a safe cycling connection to downtown Cincinnati and to the nearby cities of Mariemont, Terrace Park, and Milford.