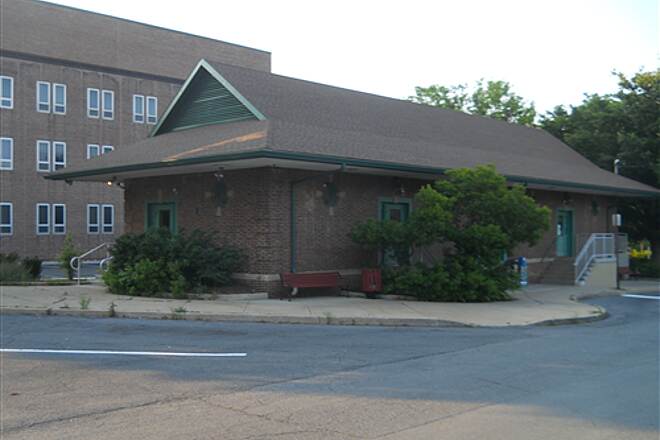 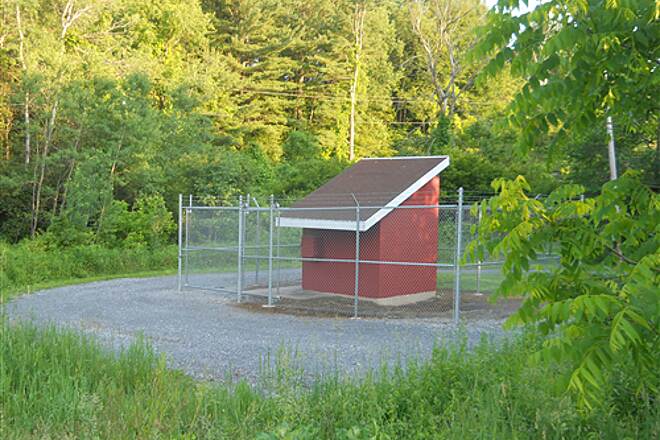 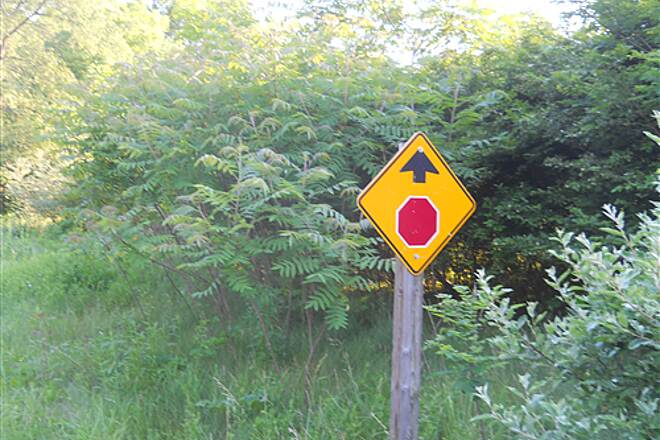 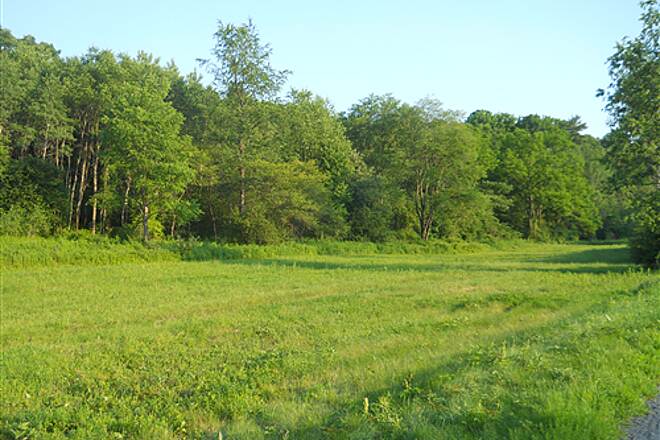 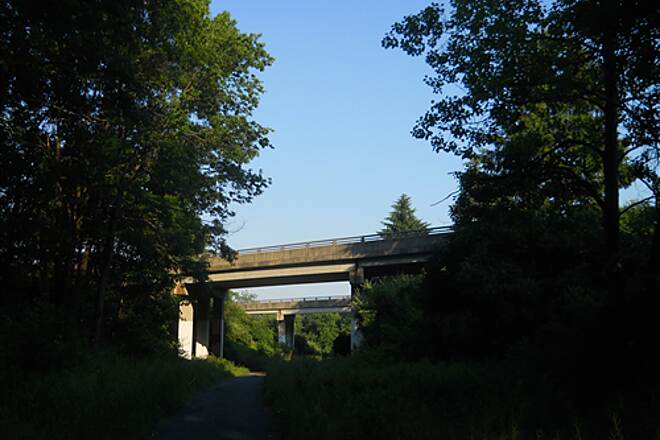 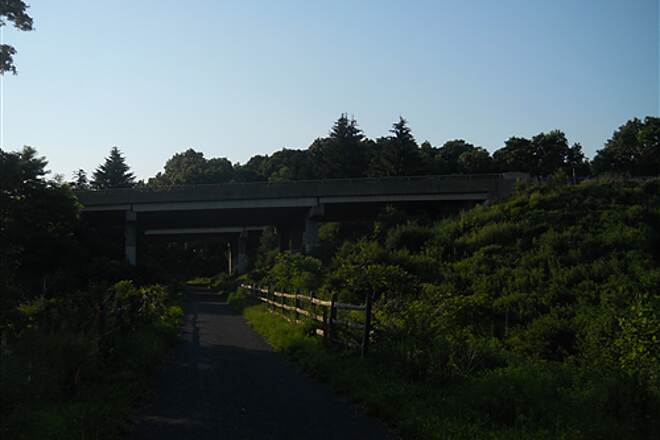 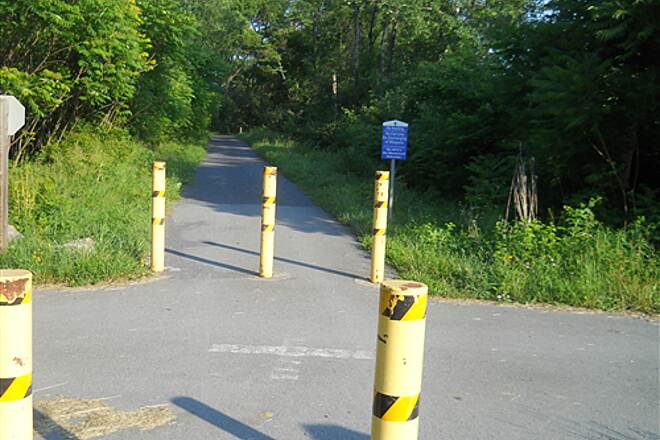 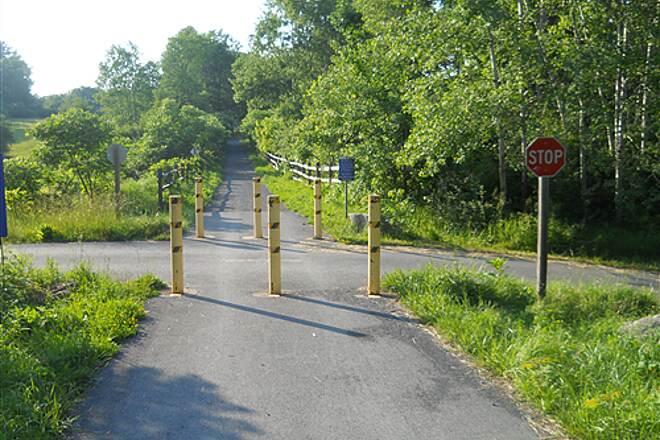 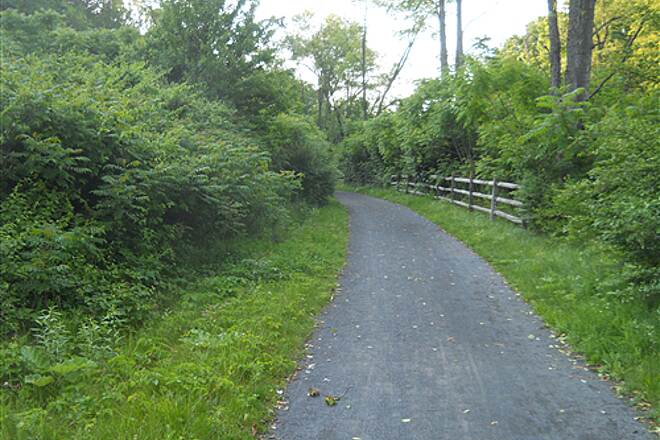 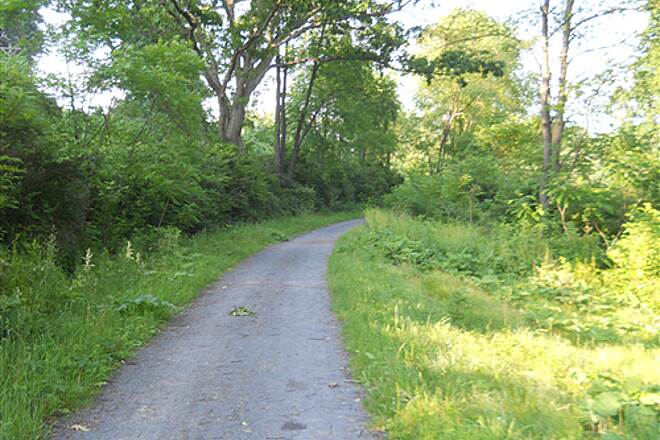 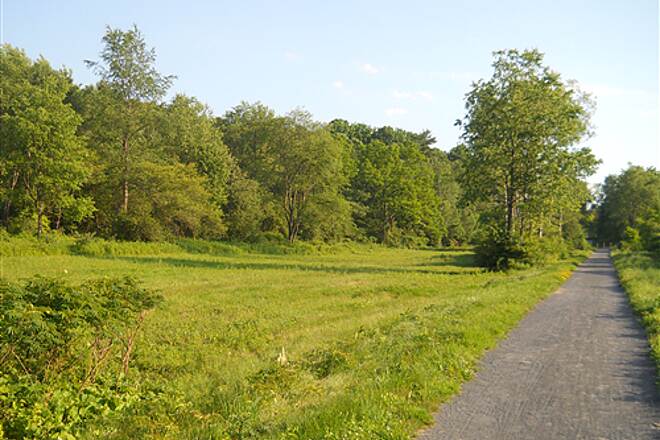 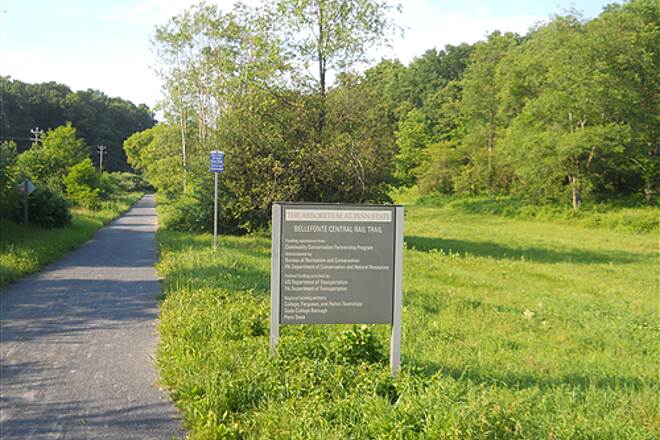 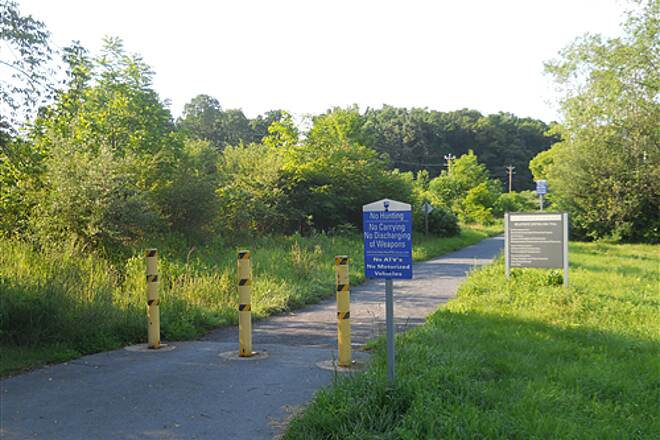 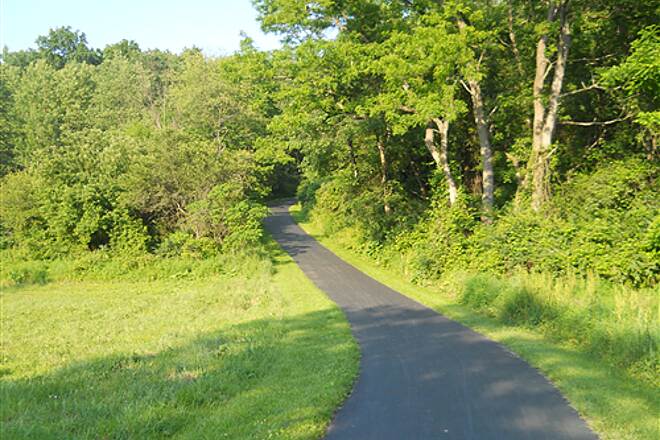 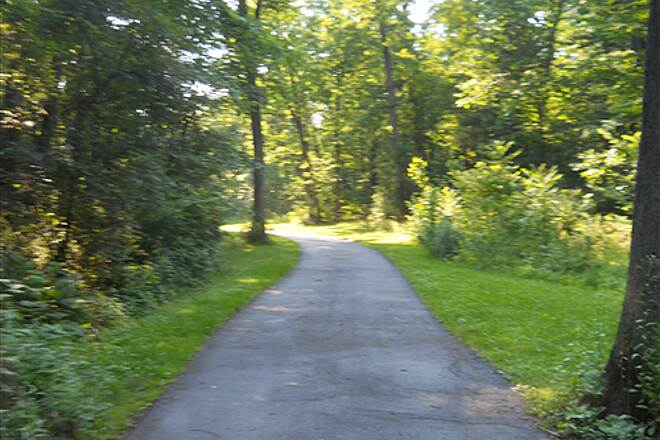 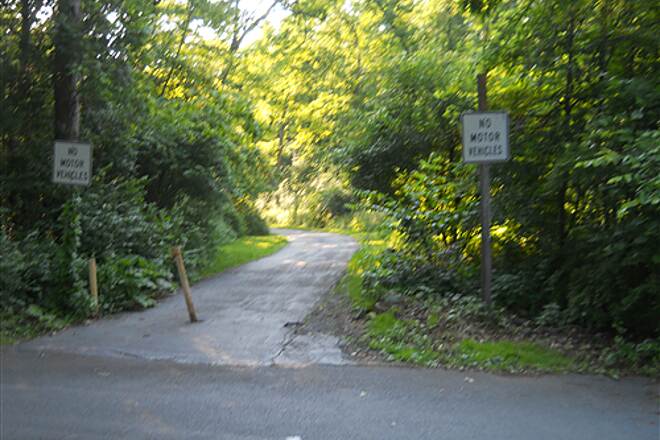 View Trail Map Send to App
Serene year-round, the Bellefonte Central Rail Trail (BCRT) in central Pennsylvania runs along 1.3 miles of the old Buffalo Run, Bellefonte and Bald Eagle Railroad corridor. The original 19-mile line connecting the towns of Bellefonte and State College, home to Pennsylvania State University, was built in the mid-1880s to move iron ore. It changed hands in 1892 to become the Bellefonte Railroad and transported passengers, including many students and freight, until it ceased operation in the 1980s. In 1953 President Dwight Eisenhower and First Lady Mamie Eisenhower traveled on the Bellefonte Central to visit Dwight's brother, then-president of Penn State.

The Bellefonte Central Rail Trail is part of the master plan for the Arboretum at Penn State, where it will be a major artery through the site. Visitors and staff will use it to reach the botanical gardens, wetlands and research facilities, and—closer to the trail—woodlands that are being restored to the oak and hickory forest that dominated the area before invasive, nonnative plants appeared.

The trail sets out a 0.25 mile west of Sunset Park along the McKee Street and Clinton Avenue Bike Path. The southern end of the trail is less than 1 mile from Pennsylvania State University, making the trail a popular route for commuting students. For most of the way it is tree lined, with open fields beyond the shade-lending serene pastoral views, until it ends after passing over a culvert and shortly before reaching the Mt. Nittany Expressway overpass.

An informal trail extends nearly 2 more miles to Toftrees Resort and Golf Course, residential areas and beyond, ending at Montauk Circle in the town of Port Matilda. At its far reaches, the trail becomes rugged and is best suited for pedestrians or mountain bikes. A feasibility study is looking into extending the developed trail to Toftrees and another 13 miles to Bellefonte in the future.

To McKee Street trailhead: From I-80 west, take exit 161, turn left and follow US-220 South 11 miles toward Bellefonte. Take exit 74 toward Penn State University on E Park Ave. At 2.3 miles turn right at McKee Street. At the end of McKee Street (about seven blocks) are Sunset Park (with parking and restroom facilities) on the left and McKee Street/Clinton Avenue Bike Path straight ahead. Follow the bike path downhill less than a quarter mile to the flat where the Bellefonte Central Rail Trail begins.

I almost skipped it. 1.7 almost not worth loading and unloading. True the official trail ends at 1.7, but the next 2.5 was easily rideable on my hybrid with 38mm wide tires. A couple soft spots but not bad. I’ve ridden hall-of-fame trails that were worse. Worst spot was about 100ft from end at Montauk Circle. Felt like pretty much gradual uphill grade form State College until about 1 mile from end. Be careful at Toftrees Ave. Cars seemed to come down that hill and around the curve pretty fast.

Nice views of Toftrees golf course. Trail even shared the paved cart path for a short section. Some road noise from 322 in the middle of the ride. I enjoyed the west end the most. On the way back, I veered off in the Arboretum to Big Hollow Road and some riding through campus and the old historic neighborhood.

Pretty steep hill right at the start at the park. Glad it was short. Nice going down, wasn’t looking forward to coming up it. Avoided it by coming back on Big Hollow, but it had hills too.

Ended up doing 10.5 very enjoyable miles. If you’re in town, be sure to ride this one……bikin-Mike

Took my 5 year old to this trail for the first time and he absolutely loved it. Has just enough hills to make it a workout for beginners and to help build stamina.

Good basic trail. It has lots of other options branching off of it to make your way around the area.

short, The end in Toftrees is rocky

At sunset park it’s a nice trail. Once you get to Toftrees a short ride away, it turns into dirt and rocks. Not worth seeking out unless you live in SC.

Nice little trail but it has not been completed yet. We biked from Sunset Park in State College and made it as far as Toftrees Apartments. We couldn't really go any further than that. There were some really steep hills on this trail. Not really a good one for kids.

I rode the trail on my bike for the 1st time today. I started from the Toftrees Avenue intersection, riding west towards Montauk Circle. After leaving the Toftrees Golf Course land, the trail was mixed stone and dirt. After about a 1/2 mile the trail narrowed to one person or bike wide and after another 1/2 mile it narrowed even further from the sides and above to the point where I was almost constantly clipped by limbs on the sides and above, riding way bent over. At Montauk Circle I turned around and rode back.

About a mile after leaving the golf course, heading in to town not only did the trail widen to a good 6-8 feet it shortly became an ultra pleasant crushed stone trail that then entered the Penn State Arboretum grounds. And parts of the trail were then paved as I approached the end at Sunset View Park.

Both parts of the trail were great to experience, they were just two different experiences. Thankfully I was riding a hybrid that handled both trail types well.

I was visiting State College for an overnight with little time to get in a hike. I found this trail which starts very close to downtown. There were side trails that I explored that took me through wooded areas with small rock bluffs that added to the beauty. I explored approximately the 2 southern most miles of the Bellefonte Central Trail and it doesn't provide great views and a lot of the trail is in close proximity to an interstate highway with the accompanying noise. That being said, it's nice to find a trail so convenient to town.

Just to clarify, the distance of this trail is 4.2 miles from McKee St to Montauk Circle, not 1.3 as listed. I was visiting from out of town and was happily surprised that it was longer than listed here. I rode the entire length and enjoyed it quite a bit.

The start of a nice trail

I use this trail very often to bike commute between my house in Port Matilda and State College. I ride the whole existing length from the McKee Street/Clinton Avenue Bike Path to Montauk Circle, which includes both the improved and unimproved sections.

The improved section from the McKee Street/Clinton Avenue Bike Path to the Toftrees property just beyond the I-99 overpass is very nice, generally well-maintained, and easy riding on a smooth, even surface (I currently commute on a road-touring bike with 35c tires). This section, however is just over a mile long and not very useful for getting anywhere by itself.

The remainder of the existing trail is unimproved and mostly unmaintained. The surface is rocky and rough in many spots to the point where if it were any rougher, it would be unsuitable for my touring bike. The trail is perfectly fine for a wider-tired bike for its entire length. Through the unimproved section, there are a few muddy spots with poor drainage, and there are a few spots that get washed out pretty badly in heavy rain. The at-grade crossing of Toftrees Ave. can be a pain, especially at rush-hour. Currently (12-12-2012) there is construction going on above the trail near Toftrees, and construction vehicles have been using the trail, so it is rougher and muddier than usual.

Hopefully improvement and extension of this trail continues in the future, as even a small amount of improvement would have tremendous benefit for a large number of potential commuters.

I rode this trail last week (Sun., Aug. 3, 2008). From the entrance on Cricklewood Drive near Waddle Road, the trail has been filled with large jagged stones that make for deep, rough going on that downhill slope (not to mention having to walk back up). There's also a patch of sand further along but by keeping far to the right it's easy to negotiate. Once the trail picks up on the old railbed, it's cinders and smooth sailing. At the end of the rail trail is a T; going left takes you to Sunset Park (up a steep hill) where I did not go yet. Going right brings you to the bottom of Curtin Street, another steep hill.

"Your help is needed! Please assist with the effort to maintain our local rail-trail!

From www.arboretum.psu.edu/planning/rail.html: The United Way Day of Caring in October 2001 helped launch a successful effort to establish the Bellefonte Central Rail Trail. With funding now secured and a design nearly finalized, the 1.3 mile trail is on schedule for construction in the summer of 2004.

Those who have visited the trail recently know that the weeds have taken full advantage of the area's rainy spring and summer. The result is that the trail is virtually blocked.

With the help of United Way Day of Caring volunteers, the Centre Rails-to-Trails Association plans to reclaim the trail so that the design and construction can be completed on schedule next season.