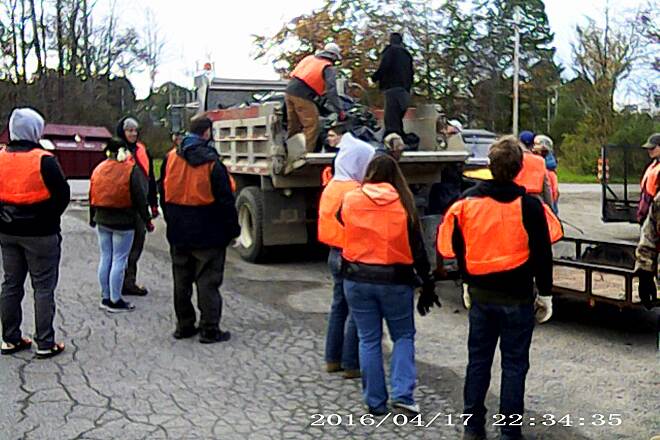 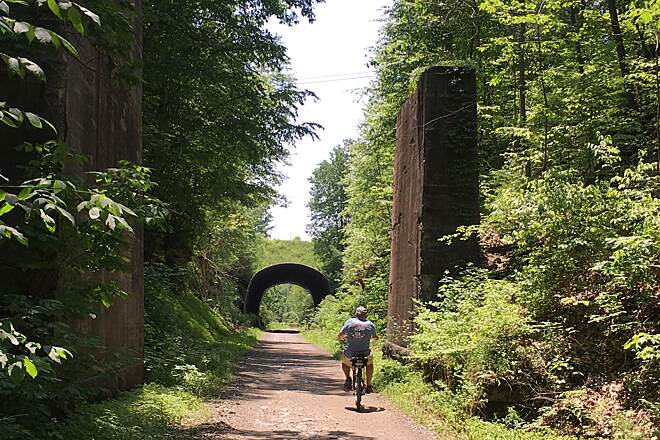 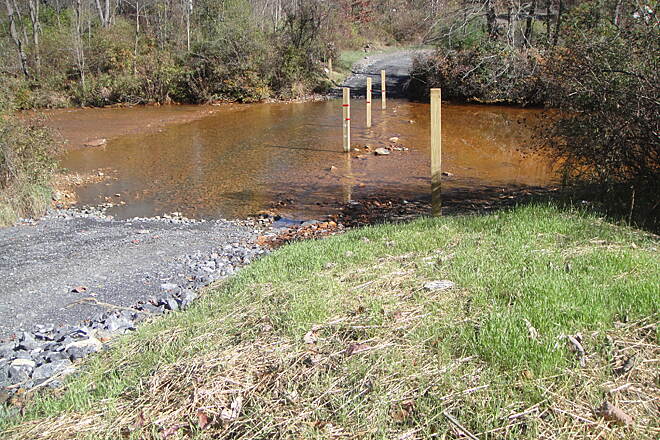 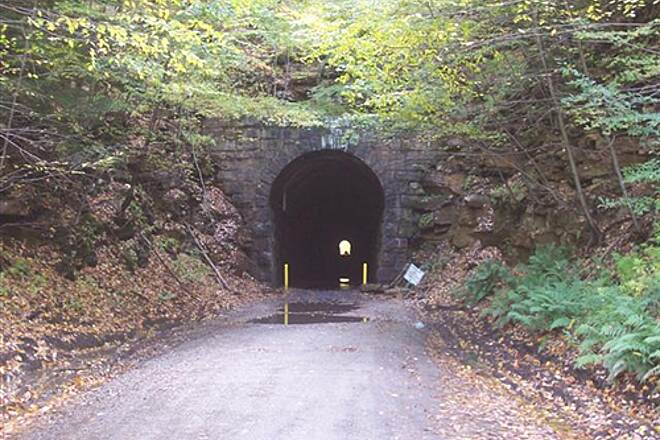 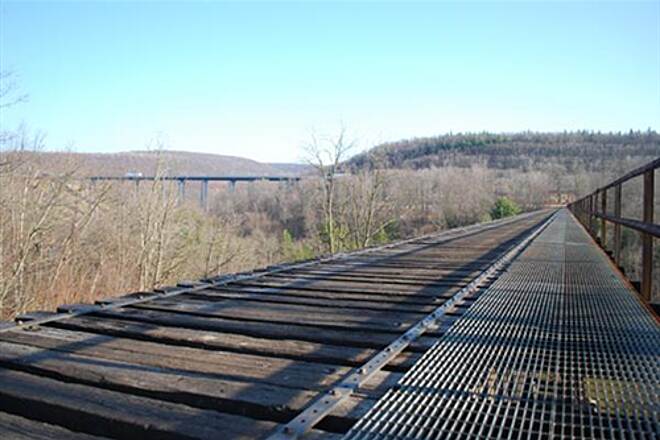 Coordinated by the Snow Shoe Rails to Trails Association (SSRTA), the Snow Shoe Trail caters primarily to ATV and off-road motorcycle enthusiasts. It is open to other users as well, but the rough ballast and gravel surface makes for a bumpy mountain bike ride or a tricky hike.

The Snow Shoe Trail finds its origins in the Beech Creek Railroad, which opened in 1884 to serve the Clearfield Bituminous Coal Company, whose mines were expected to produce 500,000 tons for coal each year. In 1899 the railroad ceased independent operation and was incorporated into the New York Central & Hudson River Railroad Company. The rail line also offered passenger service until about 1934.

The railroad saw its last train in 1990 under the ownership of the Consolidated Rail Corporation. By 1994 the tracks had been removed and the right-of-way had been acquired by the Headwaters Charitable Trust in anticipation of a rails-to-trails project. Since then the SSRTA formed and has worked to create this fully functional rail-trail.

The Snow Shoe Trail preserves the 1,277-foot Peale Tunnel, completed in October 1883. If you plan to pass through the tunnel, bring a light to get a better look at the cut-stone entrances and mix of brick and natural surface on the interior. Its viaduct offers an excellent view of Moshannon Creek; though at 770 feet long and 110 feet above the creek, the bridge may be unnerving for those with a fear of heights.

While all types of users are welcome on the trail, motorized users must get a permit from SSRTA. Local ATV membership is highly recommended. Obey all of the posted signs and be courteous to other trail users. Note that there are 12 gates with bollards along the trail; motorized vehicles must be less than 61 inches wide to pass through these bollards.

To reach the Gillentown trailhead, take Interstate 80 to Exit 147 for Snow Shoe. Turn left and head north on Route 144. Continue approximately 3.5 miles. You will pass Seperish Recycling on the left. At the bottom of the hill beyond the recycling center, turn left at the Snow Shoe Trail trailhead sign. Continue down the gravel road to the large gravel parking lot. The trail is clearly visible along the length of the parking area.

To reach the Black Bear Run trailhead near Winburne, take Interstate 80 to the Kylertown Exit. Turn north onto Route 53. Go about 0.33 mile and turn right onto Main Street (the first road past eastbound I-80 exit). Stay on Main Street (after about 2 miles you will see the fire hall and Jackson's Bar on left). Continue about 0.5 mile and you will pass the old Avondale Hotel on your left; the road makes an extreme left-hand turn with a park on your right. The road crosses over a bridge that spans the Red Moshannon/Centre County Line. Continue up a hill and the Black Bear Nursery will be on your left and a stop sign just past the nursery. You've now traveled about 3.7 miles from Route 53. Turn right at the stop sign and go about 200 feet and turn left into the entrance to the Black Bear trailhead.

From Route 220, take Steel Hollow Road to Julian Pike and turn left toward Black Moshannon State Park. At the Route 504 intersection turn left (toward Philipsburg). Go 0.1 mile across the bridge, turn right onto Casanova Road (toward Winburne/Kylertown); the trailhead is about 5.8 miles and is on the right.

Better for 4 wheelers than Mountian bikes, something different anyway

Hard to locate and complete

The Gillentown trailhead is on W Sycamore Rd not Bombarger Rd. We had to look around for the trail and found it at the Snow Shoe Rails to Trails Memorial. We were able to turn right from there and ride to Clarence and back, a distance of 7 miles round trip. If you turn left the trail is rough and stony. Very difficult by bike. We turned back a mile into it. And it is impossible to ride from one end of the trail to the other due to a bridge out. ATVs use this trail. I would not try it again.

An adventure waiting to happen

I rode a fully loaded touring bike with 38" knobbys from Snow Shoe terminus to Peale, and expected some challenges. I found them. The first rock cut was a mess of big stones and I had to walk some of it. Most of the rest was not too bad, and there were a few short sections I could freewheel, but constant maneuvering was always needed to avoid the bigger chunks and a potential puncture or rim destruction. Based on the descriptions I'd read the trail seems to have been improved significantly of late. The Peale Tunnel was an experience - long, dark, unrideable due to large rocks and huge pools of water, and walking through pushing a bike was a bit of a struggle, my feet were soaked. The biggest challenge was that the access point off the trail at Peale is not a road at all but an ATV trail that was only partially rideable downhill, and would be impossible in the opposite direction except for skilled MTB riders. I didn't go as far as the trestle.
The scenery is nice at a few points, though most of it was closed in with foliage. The rock cuts were interesting. There is a section where the interstate highway is right above the trail, which impairs enjoyment somewhat. Overall I enjoyed the experience, but it's not for road bikes or novice cyclists.

With the great Viaduct off limits to the people, this trail is not much anymore. i myself still got on it by foot in spite of the signs...people should be able to sign a waver that no liability will be held against the owner of the bridge.

This is a very pretty trail and the vistas are probably great when the leaves are off the trees. The surface is tough - a lot of very coarse loose gravel, but most of it was bikeable. The exception was the tunnel - a lot of fun but bring head and tail lights and walk through most of it; it had substantial water, even after a 2 week dry spell and big rocks for the first 20 yards. The tressel bridge is now closed - too bad as it looks like the view from there would be awesome. This is an ATV trail - we found the ATVers to be both friendly and courteous in sharing with bikes. We could not find parking at the SR 4002 trailhead indicated but parked at the ATV launch site.

5 stars for beauty in the fall, 3 for trail conditions

This a gorgeous trail in the Fall. The bridge and tunnels are a great bonus. We hiked and didn't ride, so I can't speak to bike riding. We didn't encounter any ATVs and had a beautiful afternoon-evening.

Not very good for non-motorized users

I rode from my house and bicycled the Snow Shoe trail from Clarence to Winburne on 3-10-12. I was riding a touring bike with 35c tires and was able to ride all but a couple of sections that were a hundred-or-so yards long. The sections that I couldn't ride were covered in 2"-3" stone on really wet parts of the trail. I also walked my bike over the longest bridge and through most of the longest tunnel - as it had an uneven/rocky surface that was covered with several inches of water in some places. For most of it's length, the scenery along the trail is outstanding and there are many nice vistas - especially with the leaves off of the trees. However, I can't recommend the trail for that type of bike or anything lighter, and I really can't recommend it at all for any non-motorized users. The trail surface on the first several miles out of Clarence was actually nice and smooth, but after that, it became increasingly rough, rocky, and pot-holed for the next 16 miles or so. This made for a pretty difficult, tiring, and somewhat unpleasant ride on a road bike. A bike with fat tires would have handled better and made for a smoother ride. Although it was a chilly day in early spring, there were *many* ATV's on the trail. Almost all of the ATV users were very courteous to me, but the noise and exhaust, combined with the poor trail surface made the riding considerably less pleasant than it was on the quiet back-roads that I took to get to and from the trail. Unfortunately, there is also beginning to be some Marcellus shale gas development in the area, which will only further degrade the scenery and the experience.

I have traveled this trail by ATV and foot. Going in on foot isn't bad if you stay away from summer holiday weekends. For those who enjoy geocaching, there are several along this trail. Peale Tunnel, the Viaduct, one near Six Mile Run and one at Black Bear Run. All locations are highly recommended. More geocaches will most likely be added in the future because there are interesting sites all along the trail. For historic information on the former Beech Creek Railroad (now Snow Shoe Rails to Trails) visit: http://go.owu.edu/~jbkrygie/krygier_html/peale/peale_bc.html

"My husband and I found this trail to be hard on the feet, ankles and knees. The large gravel made walking difficult. The trail is also used by ATVs and dirt bike so we frequently had to step aside to allow them to pass. We also would have liked some distance markings at least on the map at the trailhead so we would have known how far the bridges and tunnels were from the trailhead."

"As of this year 2005 the Snow Shoe Rail Trail is open to the public. Motorized usage,however, is by permit only through the SSRTA. Permits can be down loaded from the web at www.sstr.org. "

The Snow Shoe Trail is a developing trail system that is open to members only. The Snow Shoe Rails to Trails Association is a great group of folks who like to have fun riding ATV's.