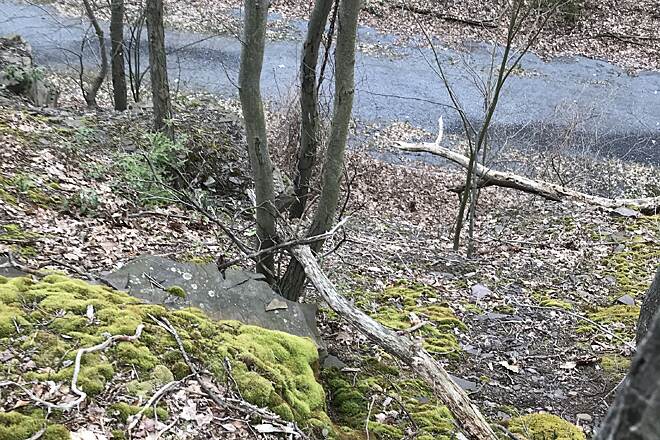 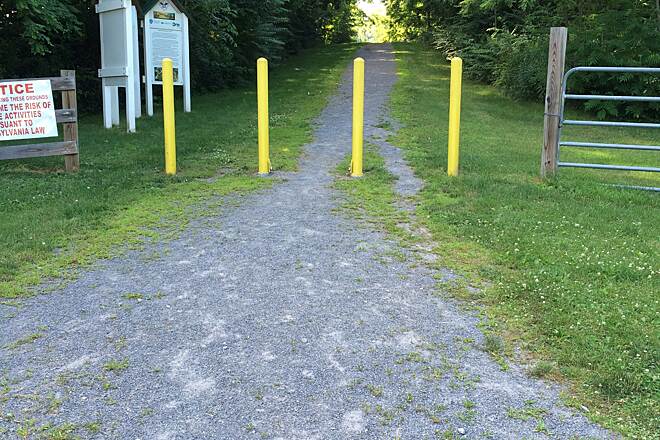 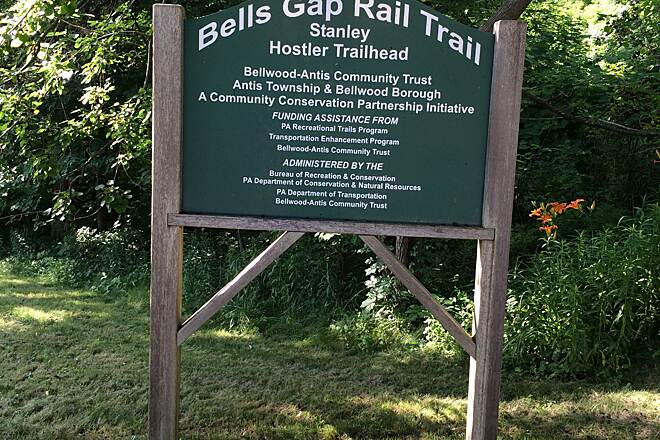 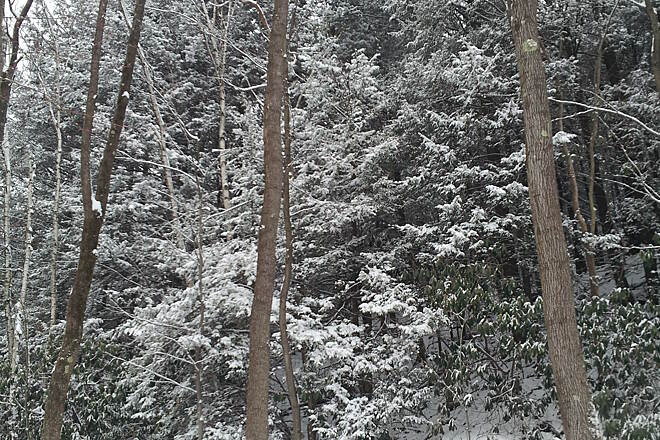 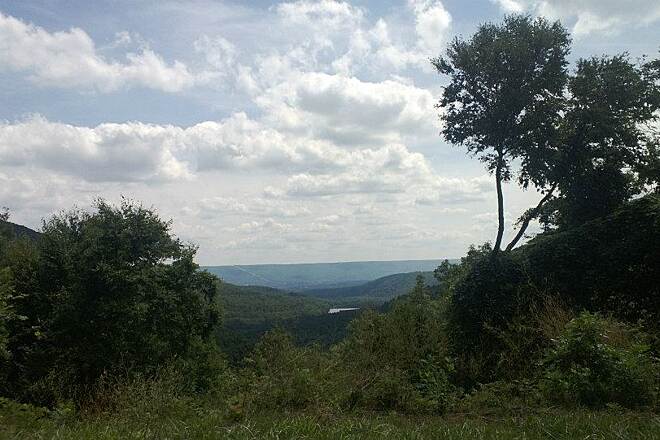 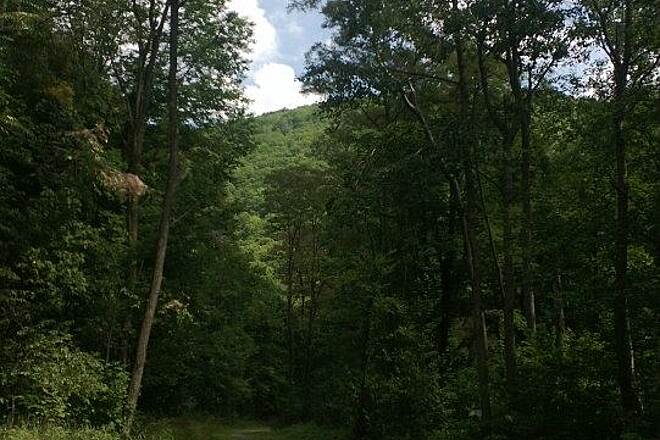 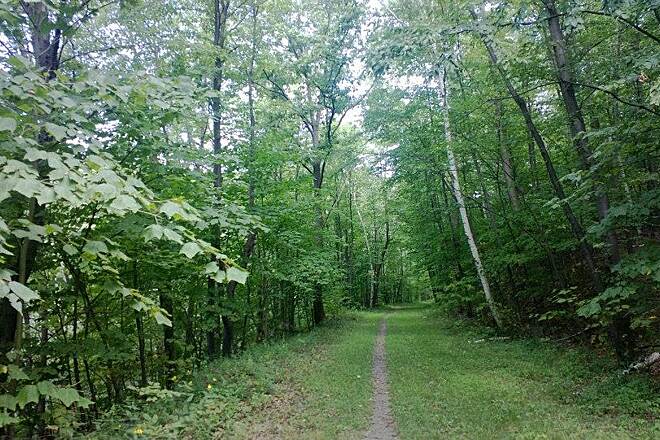 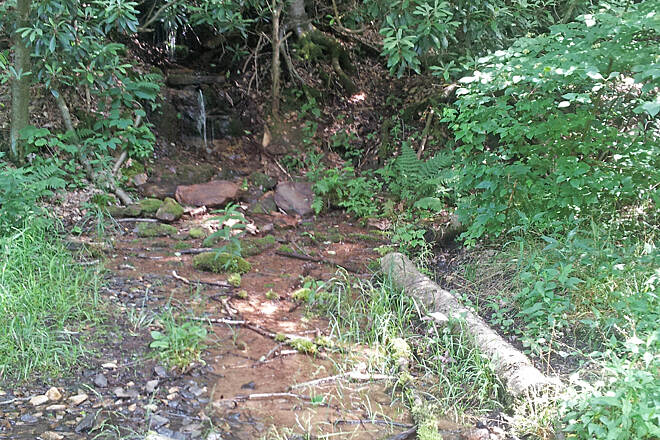 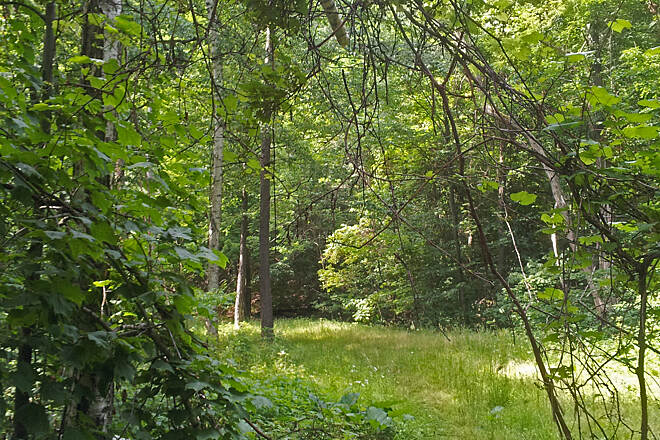 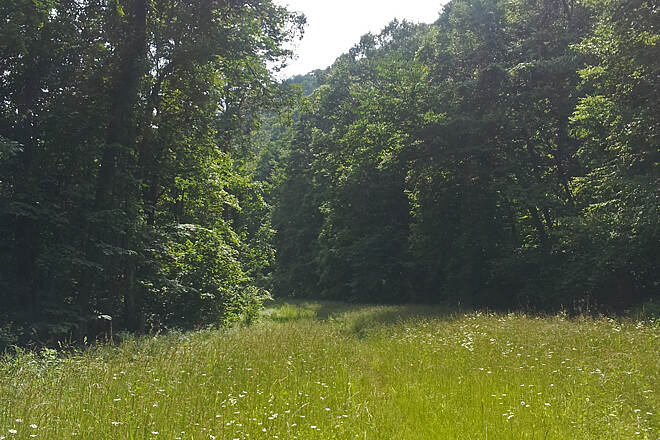 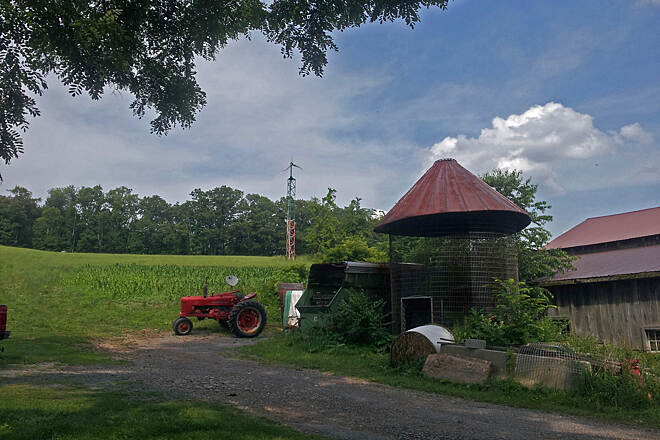 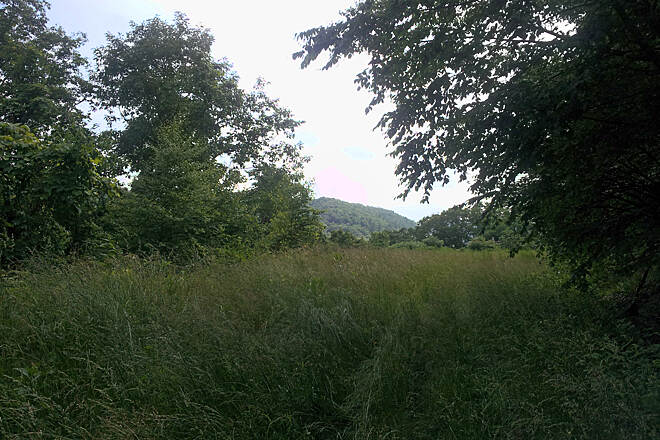 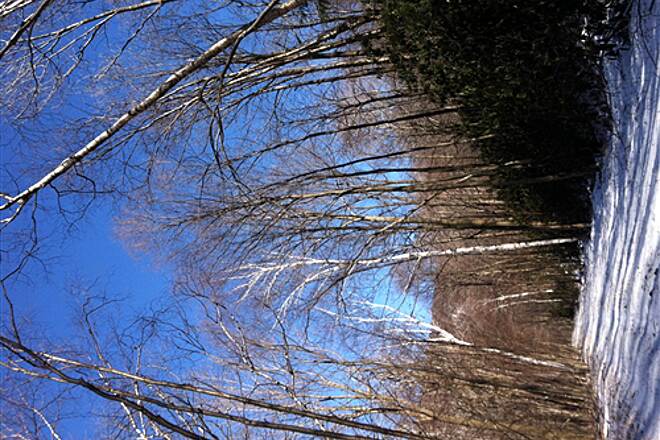 The Bells Gap Rail-Trail is really two trails in one-a smooth 2.1-mile southern section with crushed limestone surface, and a rougher, more difficult northern section of 4.2 miles that is best-suited for mountain bike enthusiasts or hikers seeking a challenge.

Starting from the trailhead off of Igou Road at the southern terminus of the trail, the trail ascends at a rather steep grade for almost its entire 6.3 miles with a couple of locations where it levels off ever so briefly. Horseback riding is permitted on the grass edge of the trail.

Along the smooth 2.1 mile section of the trail, there are a plethora of benches along the way to rest and enjoy the scenery. A couple of the benches even have a canopy roof over them. After the first 2.1 miles, the trail enters state game lands and abruptly changes to an unimproved trail that consists of dirt, ballast, and grass. Approximately at mile 5.7, the grassy trail becomes a state game lands access road consisting of ballast and cinders for the remaining 0.6 miles. The trail ends at Route 865 in Lloydsville; there is no trailhead or parking here

To Bellwood trailhead: From I-99, take exit 41 onto 865 toward Bellwood. Continue north on 865 for approximately 2.5 mils though Bellwood to Igou Road. Turn right on Igou Road; parking at the trailhead is immediately to the left. There is a small sign on 865 for the Bells Gap Trail at the intersection with Igou.

The southern 2.1 miles of this trail is wheelchair accessible.

I biked and hiked this trail on Sunday 8/16/2020 with a temperature in the mid 80's. Despite the smooth crushed limestone surface for the 1st 2.1 miles, it was still a workout trying to move at a moderate speed. I took a photo / water break about every .5 miles to catch my breath. I continued biking the trail into the State Game Lands at mile 2.1 for about .25 miles before I dismounted and hiked 3.6 miles of the trail pushing my hybrid bike. At mile 5.7, the grassy, tire-rutted part of the trail dumped out on to a State Game Lands access road. I was able to gingerly bike this section of trail over ballast and cinders for the last .6 miles before encountering one of those DCNR yellow bar gates very near Rt 885. My T-shirt was soaked with perspiration. After taking some pictures and drinking a lot of water, I headed back. I found it best to bike the grass next to the dirt path that had been forged over the years from fellow travelers. The dirt path was narrow and many of the underlying stones had made their way to the surface which made the dirt path a bit treacherous in some places. I was able to bike at a fairly moderate pace on the grass with a hybrid bike travelling between 11mph and 15mph. When I finally got back on the crushed limestone surface, I was flying; hitting speeds of 21mph. If there had not been any soft spots on the crushed limestone surface, I would have been able to hit higher speeds. But the fear of wiping out held me in check. It took me about 2 hours and 10 minutes to ascend to the end of the trail and about 20 minutes to descend back to the Igou Rd Trailhead.

Some commentary: The trail is nice where it has been surfaced with the crushed limestone. It's wide and hard packed most of the way with lots of poop-out benches. There are mileposts every .25 miles. The ROW (Right of Way) was built on a shelf cut out of a mountain. So on one side of the ROW, one has an ascending hill while on the other side of the trail one has a descending hill with nice vistas. It is not until one starts to bike / hike the undeveloped part of the trail, that one can obtain vistas of distant mountains along with a couple of rock cuts. I covered this trail by myself in the evening and I could hear and see wildlife in the undeveloped section of the trail. I felt very uneasy and was ever so glad to be able to move quickly thru the undeveloped area on my return trip. I would recommend covering the undeveloped section with another person or dog.

It’s a incline from the trail head up. Nice bench’s, nice walking or biking. You can tell someone is trying to improve it.....

When I read rules that specifically state all dogs are to be leashed, that is what I expect. The only reason I go to any of these Rails to Trails is for the safety of my dog considering the cities of Altoona and Hollidaysburg both have no enforcement, and I mean zero even in school zones, for rules concerning leashed dogs.

If you know anything about dogs, you would understand a leashed dog will feel the need to protect themselves against a dog running LOOSE. As on any given Rails To Trails in this area, Lower Trail included.

I do not believe your conservatory is part of 6 to 10 in Duncansville, but you know, idiots are everywhere.

Finally got another one of those Pennsylvania Railroad tower name origins here... "BELL", for, not only BELLWOOD, but for the BELLS GAP RAILROAD junction here, which was right at the PRR station! Great photos in that "BellwoodAntis" website! You get two miles of STEEP, I mean the STEEPEST trail I have ridden in my 730 miles of rail-trail outings! That stated 3.5% is compounded by large washout gullies which have been filled with inches-thick layers of crushed limestone, which make the grade tougher going up, and downright dangerous coming down! (Hug those brakes the whole way back!) The improved trail ends at 2.0 miles from the lower trail head, and I ventured only a few tenths of a mile farther on the 1938-abandoned high grass right-of-way, with protruding rocks, old ballast, and cinders, especially after I almost ran over a black with yellow bands snake on the trail, near the site of the once largest viaduct of seven (which I believe I've identified as a TIMBER RATTLER!) It might be wise to do the upper end of this trail, MP2 to Lloydsville, after the frost and cold weather sends these creatures back into hibernation! Watch that high grass and single-lane bike path right now! There are no railroad artifacts visible on this trail, but the Boy Scouts did, very intelligently, place several significant, and very informative markers at spots, And as most of the markers I've seen get vandalized, these paper markers are locked, behind glass, in cases facing AWAY from the damaging sunlight! Good job, guys! Great information on the railroad and its history, so much lacking on so many of the rail-trails I have scoured! Again, forestation is a scenic killer right now. Without leaves, this would be a pretty dramatic setting! PA-965 climbs the Allegheny Range right paralleling you, but falls off hundreds of feet below as you ascend to Milepost 2. Sadly, pre-trail encroachment never allowed the trail to get down into Bellwood proper, but do check out the junction site at the Station Street pedestrian overpass. BELL Tower was located west of town, and its interlocking spanned the once four-track (now three) PRR main lines, and spun off the Bells Gap Railroad (later the 65-mile long Pennsylvania Northwestern Railroad), as it was, in 1887, extended to Punxsatawney, PA. You can ride the OTHER end of this railroad WEST of Punxsy, on the 15.5 mile MAHONING SHADOW TRAIL. I highly recommend that ride.

Rode the trail for the first time today on horseback - very enjoyable, nice grassy footing along the sides, with interesting historical markers. Gamelands part has gorgeous vistas of Allegheny Front, and even has some curves.
Directions to parking could be improved. There is no sign for Igou Rd., only Grandview Rd., which says "no outlet" and that's the road you want. I passed it by the first time and went all the way to Lloydsville before I could turn the trailer around. Not complaining, just saying maybe the directions could better.

This is a very nice trail, with a 3.5% grade going uphill traveling north. I rode my mountain bike on it this afternoon and really enjoyed the scenery and the beautiful woods. The first two miles are a very smooth cinder trail, the next 3 miles were a grassy with ballast gravel, but a good surface. I did not cover the last mile or so. The ride back (south) was wonderful, all downhill. There are several signs along the trail giving the history of the railroad and industry in the area.