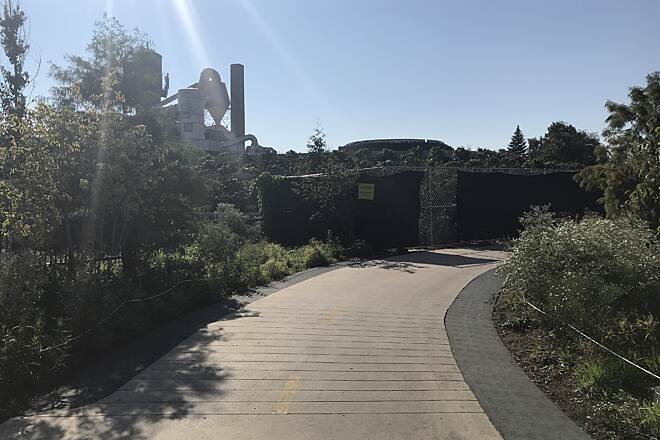 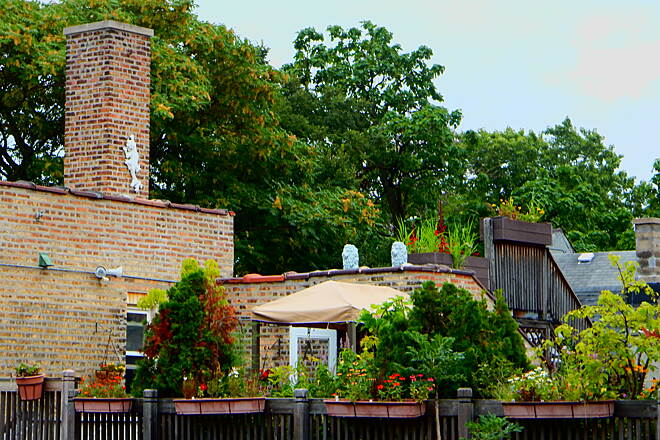 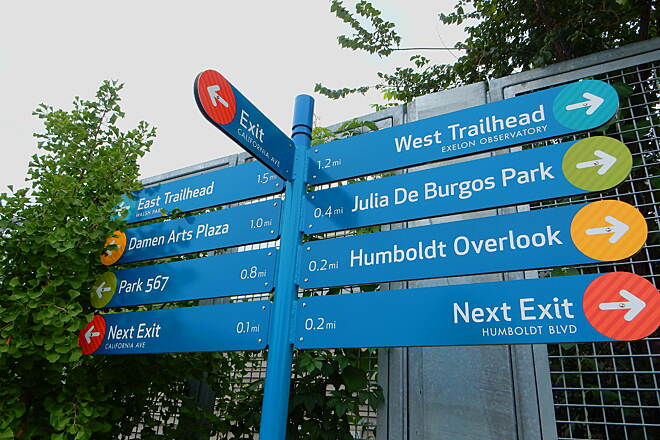 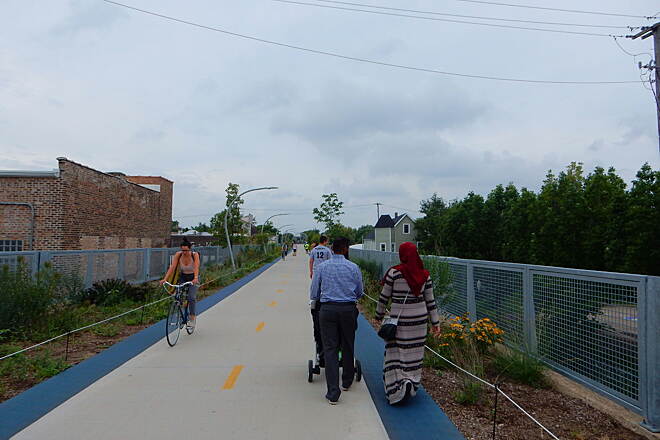 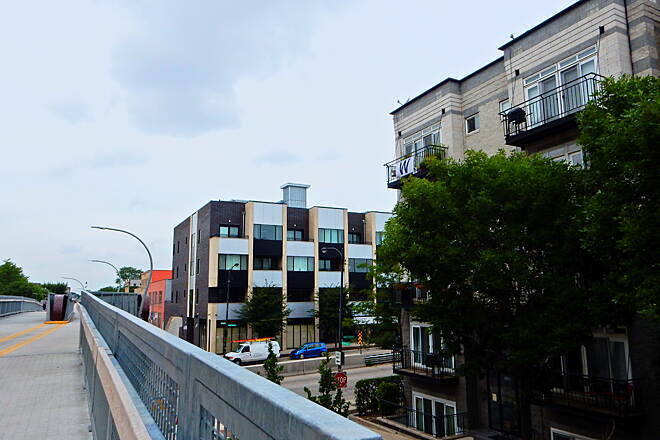 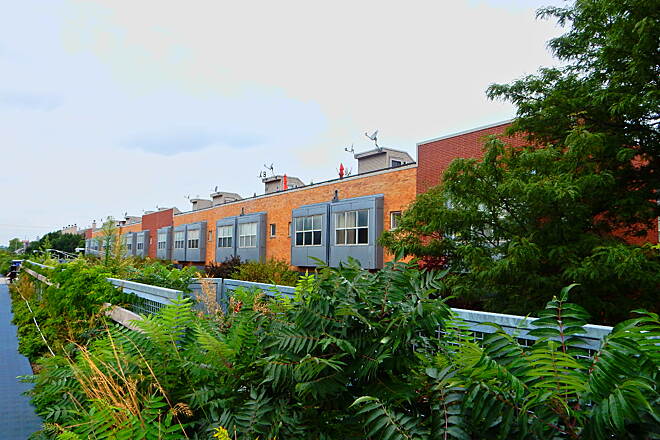 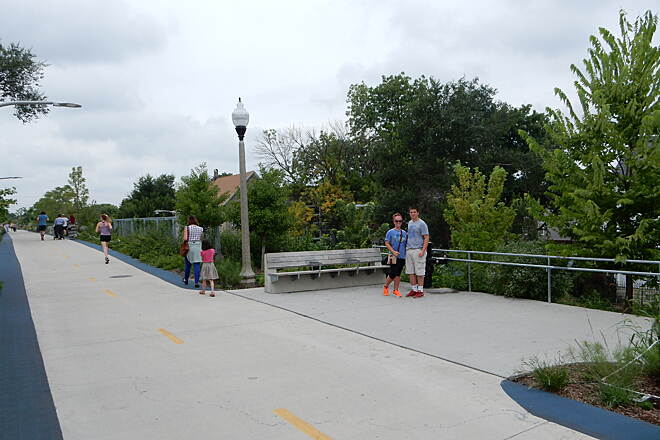 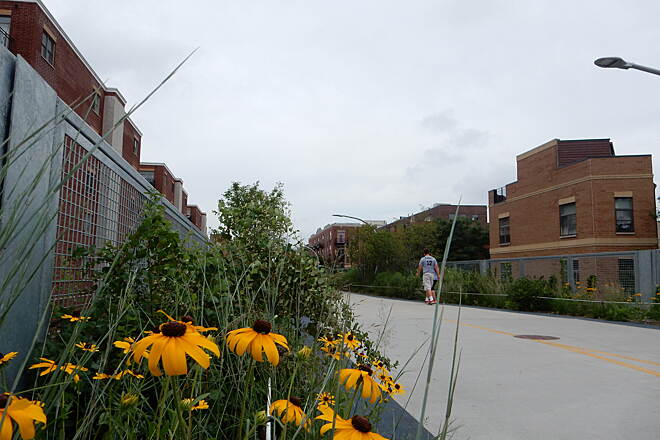 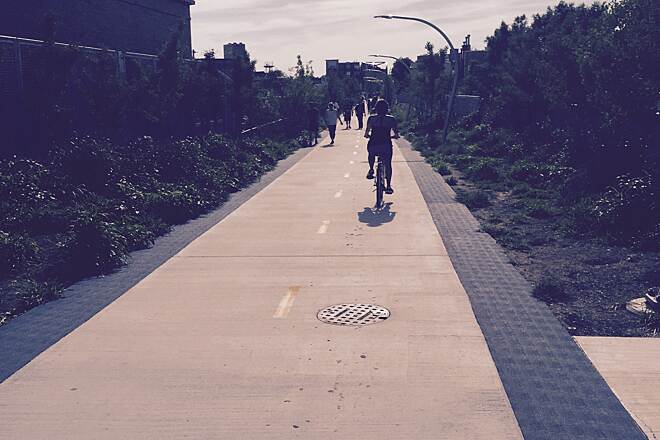 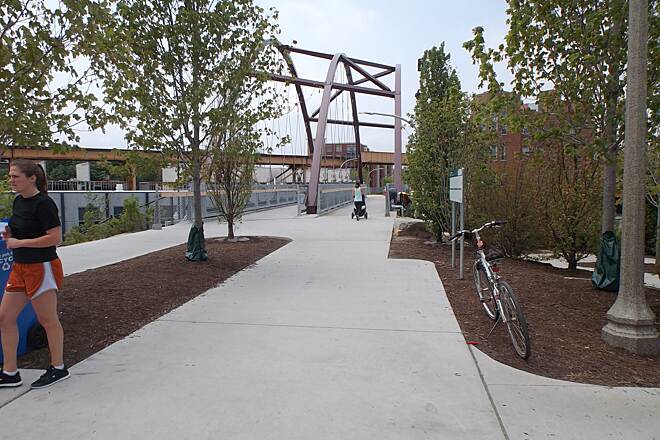 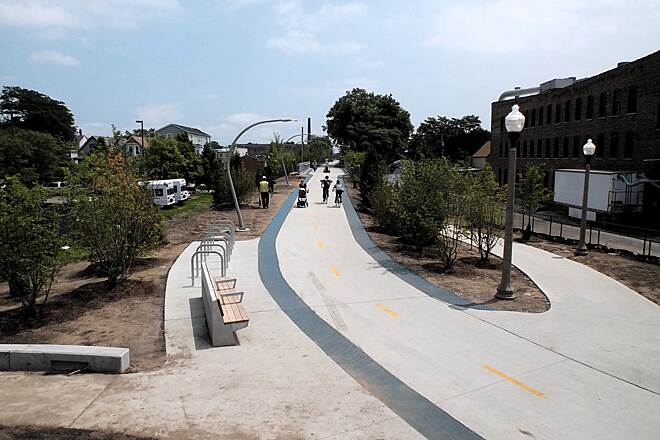 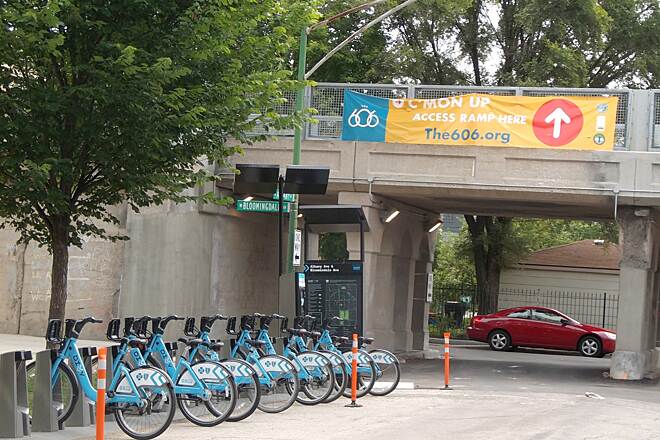 The Bloomingdale Trail, part of “The 606” park system, is a 3-mile, elevated rail-trail on Chicago’s northwest side. Built on a former rail line, the trail sits 17 feet above four of the city’s neighborhoods: Wicker Park, Bucktown, Humboldt Park, and Logan Square. An estimated 80,000-plus people live within a 10-minute walk of the pathway and the parks surrounding it.

Plans for the rail-trail began in the late 1990s, but the freight line remained operational for several more years. By 2003, neighbors and fans of the idea began to gather and advocate, forming the Friends of Bloomingdale Trail (FBT), a nonprofit community involvement group. FBT partnered with the Chicago Park District and The Trust for Public Land, among others, to design and develop ideas for the park. After years of discussions, final plans for the new trail were revealed in 2013, and the trail opened in 2015.

As you travel along the trail among cyclists, strollers, runners, people walking their dogs, and children riding their bikes, you get a very neighborhood feel. Numerous coffee shops, bars, restaurants, and shopping districts are also all within a few blocks of the route. You’ll pass five trailside parks, many historical sites, and other points of interest on your journey too.

Twelve ramps down to street level allow for ample neighborhood use. The paved trail is 14 feet wide with a sleek, modern look featuring steel railings, bike parking, benches, and landscaping along its entire length. Currently, there are no restrooms along the trail, but both the eastern and western trailheads have bike repair stations and water fountains.

While there are no designated parking areas for the trail, street parking is available nearby. Multiple Metra and CTA train and bus routes also have stops close to the trail, and there are Divvy bike-sharing stations close by as well.

To reach the western trailhead, take I-90/I-94 to Exit 47A for Fullerton Ave. Head west on W. Fullerton Ave. and travel along it 1.3 miles. Turn left onto N. Kedzie Blvd., traveling south 0.5 mile. Turn right onto W. Armitage Ave., now traveling west 0.7 mile. Turn left onto N. Ridgeway Ave. and you will see the trail entrance at the cul-de-sac at the end of the road. Look for street parking in this neighborhood.

This trail is ok for a slow ride. I wouldn’t use it to work out as it’s short and crowded most of the time. Late night ride is empty and well lit but there have been assaults etc in the past on this trail. I’ve used it to avoid having to ride armitage/north ave from west to East but on a nice day, I found its faster dealing with car drivers on the road.

I've ridden and run this trail several times. It's really nice, newly paved and smooth. Well taken care of and has nice views. The only warning is this trail can get pretty busy so be cautious on it.

A Very Cool Ride, With One Major Caveat

The 606 is amazing. Just the concept itself is unique and beautiful to experience. However, recent crime has made the 606 a no-go for me. Realistically, robberies can happen anywhere at anytime, but the recent uptick in these happening at the 606 has me on edge. If you go, go with another person, go during the day, and keep your wits about you. Pay attention to suspicious people and report any incident or anyone suspicious. This is a rule of thumb for doing anything in the city: just be smart.

Being a Chicagoan I had yet to ride the 606 until last week. My first impression was what a great trail. The idea of traveling without motor traffic and no stops for almost three miles flies by. The ride on the return trip was much slower as there was more traffic on The 606. Still it was the fastest way to travel through this area. The 606 has also improved an area that at one time the term less desirable would of been an understatement. The area has improved and the beauty of The 606 matches the surrounding homes and neighborhoods. This in my opinion is from The 606. We found all the people very pleasant on our journey and they seemed to be very proud of The 606. we saw the Chicago Police Department in a strong presence on our Saturday journey. The CPD was on both foot and bicycle. My only complaint is that it is too short of a trail. Hopefully Chicago will develop more of these useful neighborhood enhancing trails. It is all good on The 606.

The 606 ultra-smooth surface is great for inline skating!

Great for training but busy

This is a pretty great trail for bikers and runners only when there aren't a lot of people on it(thats rare). Winters make the trail empty. during summer if u want to get a workout you should come early morning or late evening to not have to dodge everyone. nonetheless I love it, having a trail so close allows me to bike more.

A couple of relatives and I walked this trail on 8-15-15. We all thought it was great. However, this trail is somewhat narrow. You have to be on your toes and aware of the bikes speeding by at all times, as this trail seemed crowded even for a Monday when we walked it. As stated in other reviews, I would imagine on a nice Saturday morning it would be almost overrun with congestion. The trail is short(around three miles), so to me it's more of a walking trail. But it's well worth it to check out. It has very new, clean look to it, and best of all, it cuts right through some of Chicago's neighborhoods without the hassles of traffic. Although there are some open areas, on many stretches you're surrounded by buildings on both sides, close to the trail. But most are two or three stories high, so the trail retains an open feel to it.

This trail turned out to be a great use of abandoned railway and is a wonderful example of what an urban trail can be. Connects to city parks and provides plenty of great views of the city, with foot traffic (supposedly) separated from bike traffic and using a rubberized track. Great way to take in the city from above.

This is a good route but after 10 pm unless you're trying to go slow. This was built as a commuter route but is really more along the lines of public park or something. Tons of people walking dogs, children riding scooters and just people kind of using the path like it's just another sidewalk. In my experience, if you go before 10pm you will just be dodging kids, dogs and unaware pedestrians. However, once it clears out after 10pm this is a great route for anyone training. Hopefully the commuters will actually get to use this safely once the "new-trail hype" dies down a bit.

A Great Trail for All Chicago!

It's been just over a month since the official opening of this trail, and already it's plain to see it's going to be a great one. There are still some amenities that need to be added, landscaping that needs to be completed, and infrastructure to be built up around it. But the trail surface is complete and it's design is perfect.

I drove into the city and rented a Divvy Bike to ride the trail. And even at midday on a weekday, there were a lot of users on the trail. Families, groups of kids and friends. Walkers, bikers and skateboarders. Young and old alike. Plus a healthy presence of Chicago's Finest (police), as well.