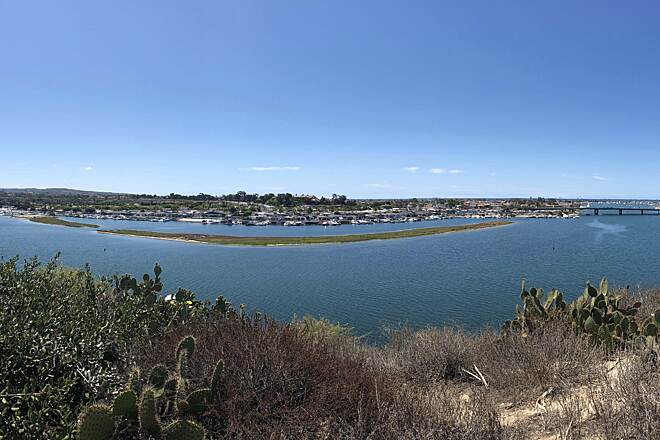 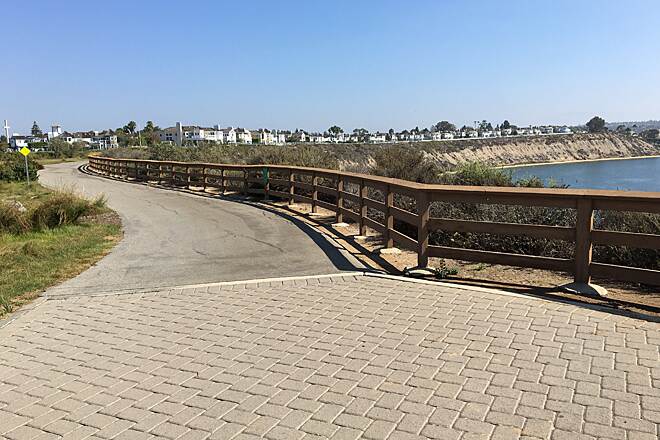 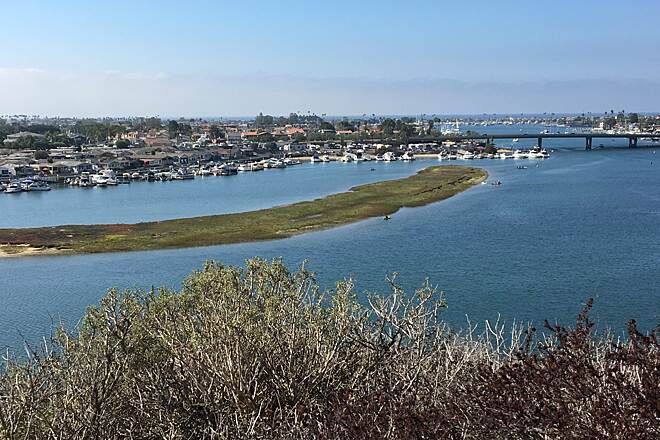 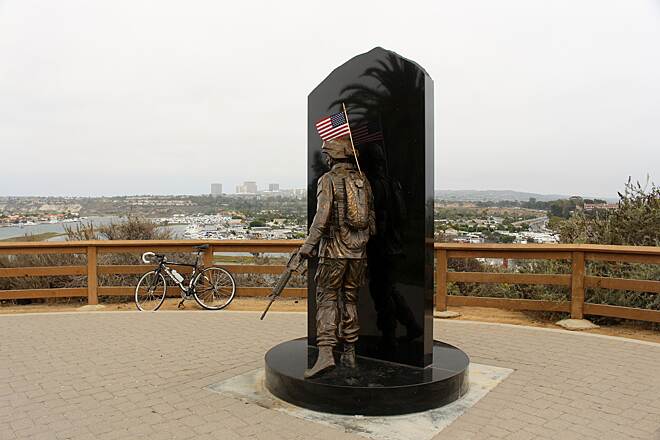 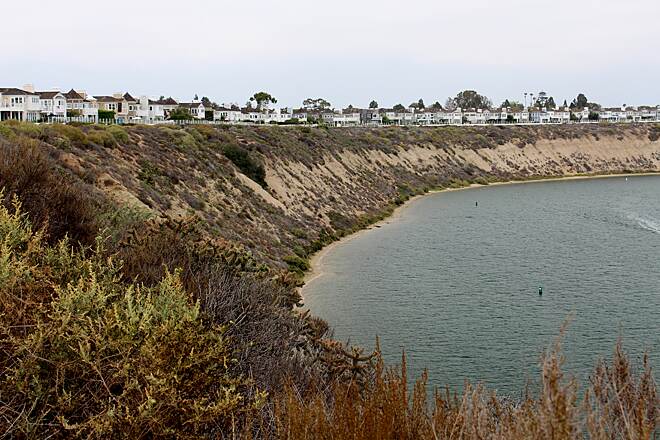 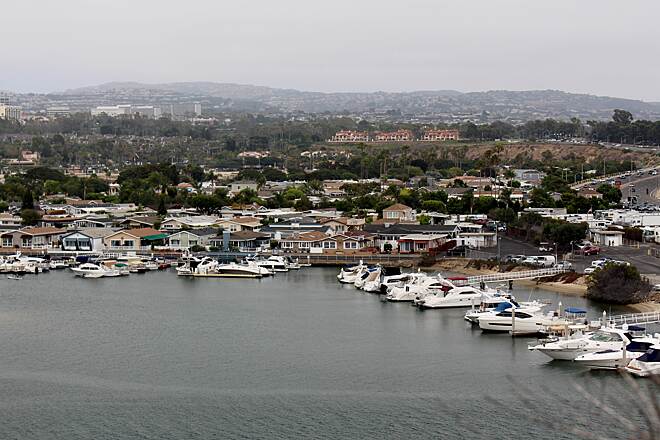 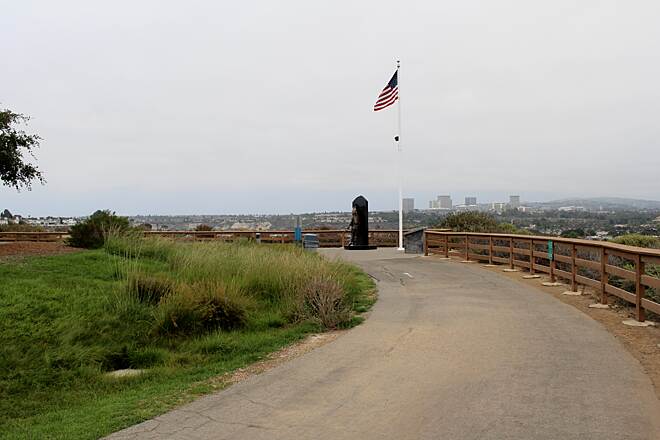 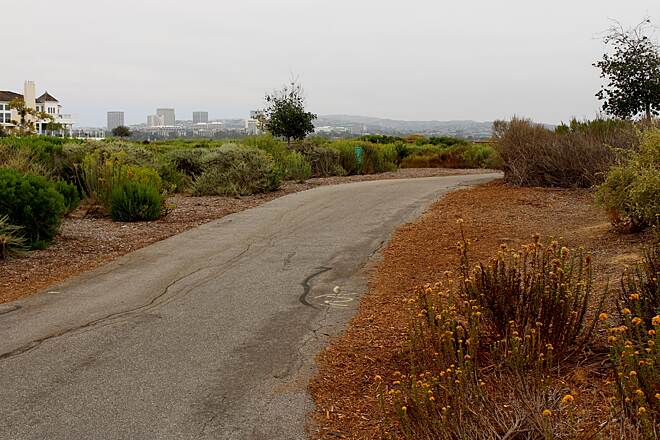 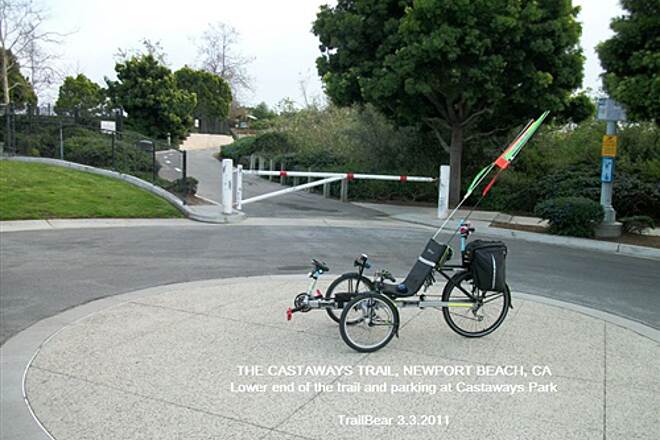 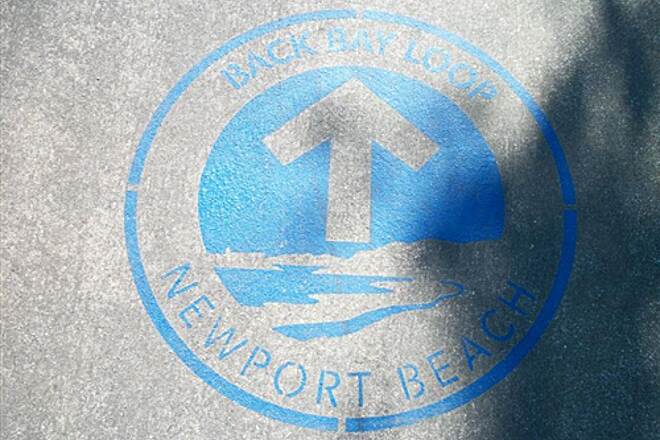 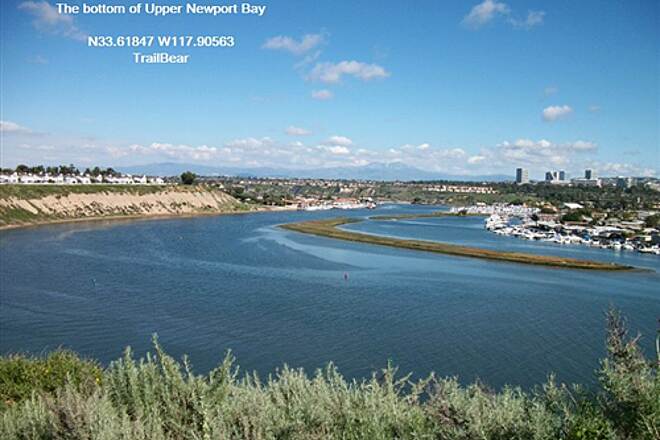 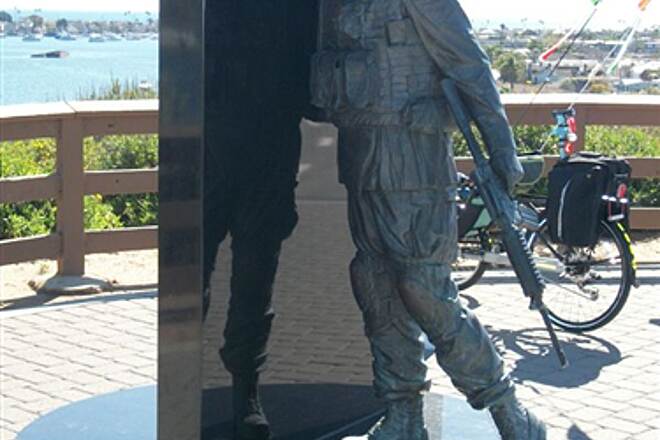 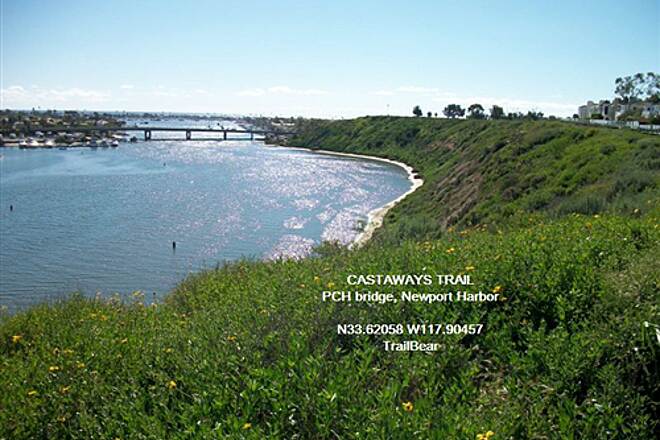 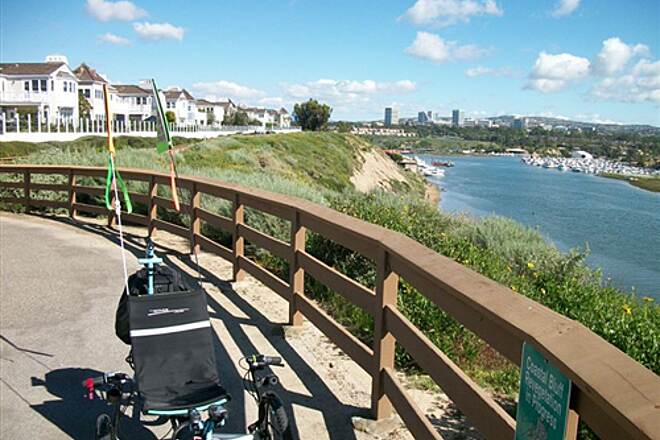 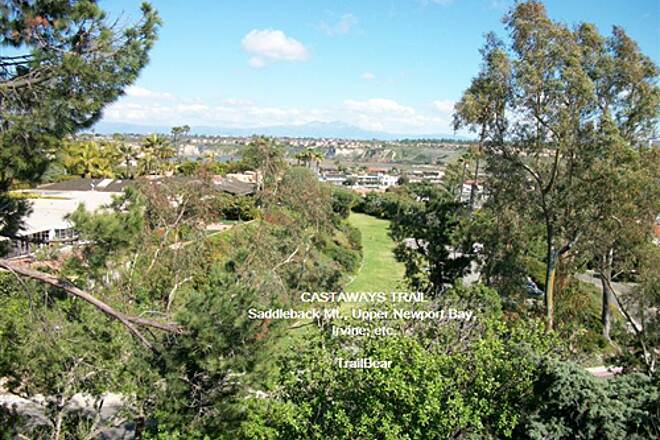 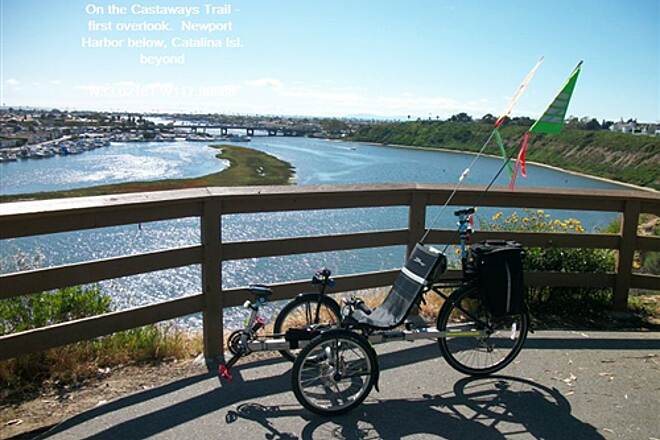 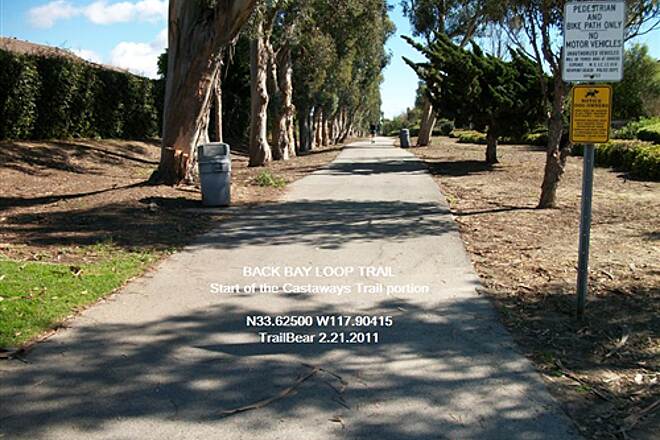 The short Castaways Trail has expansive views of the mountains, ocean, Upper Newport Bay and Newport Harbor. Much of the 1-mile path runs along the bluffs in Castaways Park and the trail offers several overlooks to take in the scenery. Both tails of the trail end at Dover Drive, so travelers can make a loop by continuing along the roadway, passing by Bob Henry Park along the way.

From the Pacific Coast Highway (State Route 1) in Newport Beach, take Dover Drive uphill to Bob Henry Park on Castaways Lane (on right). This area provides access to the trail, as well as parking, restrooms and drinking fountains. There is another small lot across Castaways Drive and fronting on Dover Drive. The start of the trail is at the far end of this lot. Another option is to ride uphill on Dover Drive to the other end of the trail at Dover and Westcliff Drives.

Most locals consider this part of the ten mile loop - called fondly the Back Bay Loop. This section runs behind Expensive houses that overlook the water and is a great place to walk your dog.

Nice short, paved trail that ‘bridges’ or continues the Back Bay’ loop trail of 10 miles around the estuary.

Nice short, paved trail that ‘bridges’ or continues the Back Bay’ loop trail of a total of > 10 miles around the estuary. Panoramic views of the Back Bay to the West, South and East. Two look-outs at opposite ends, including a cliff-edge set of views along 90% of the trail. Some bark alternate sections and then a grand fan-ale down a 10 - 15% paved section that the Newport Beach City asks you to walk your bike down ( please yield to pedestrians if you ride ). You can street park at different ends, or better yet, ride from the YMCA.

It’s a fine, sunny day in SoCal and the TrailBear is enjoying the views along the Castaways Trail atop the bluff overlooking the Upper Newport Bay and the Newport Harbor, plus mountains, fine homes, office towers and bit of this and that. There is a whole lot of overlooking to do on the Castaways.

Length = 1.14 miles. You can make it longer and do a loop by using the bike/walk along Dover Drive.

Average slope = 2.2%+, -1.5%. Percentage slope is feet up/down per 100’ horizontal. GE claims a max slope over 34%, but this is not true. TB measures slope with an electronic level on his surveys and says, ”Not so and nowhere near.”


@@@ THE BIG PICTURE – CASTAWAYS AND THE BACK BAY LOOP

The loop is worth the ride. There are some miles of mellow bike lane on the east side of the bay. Traffic is restricted. Speed is limited and you are almost at water level. However, on the west side there are miles of bike lane up Dover Dr. and Irvine Ave. with four lanes of high speed traffic. Not the place for a family ride with young kids.

Looking at this Irvine Company web page, you will see that you can take the loop and join another 22 mile collage trail (which is all Class I bike trail) called the Mountains to the Sea Trail. You do have some riding options.

If you are just doing the Castaways Trail, you can park at Bob Hart Park on Dover Dr. This is a full service trail head. You can also park at the little lot across the street and next to the church parking at the southern end of the trail.

Want a bit of distance and an 8 mile loop ride?

TrailBear starts his ride some miles north at his condo. At Irvine Ave. and University Dr. is the Upper Newport Bay Nature Preserve and Ecological Reserve, with on-street and lot parking and restrooms and water in the Peter and Mary Muth Interpretive Center. There is a lot of bike activity here as the start of the San Diego Creek Bikeway and 45 miles of Class I trails in Irvine is about 1.7 trail miles away.

Dover Shores is a nice place to ride. It is laid out something like a maze for good reason. There are no really direct streets, so there is no through traffic. Instead you have wide streets, low traffic, gracious homes and a nice ride from trail to trail. TB often does this as an 8 mile out and back ride after work, ending at the Marine Memorial in Castaways Park. The two streets of interest are Santiago and Highland Dr. At Santiago and Polaris Dr. there is a short spur leading onto the Castaways.

If you rode Santiago over, you turn left once on the trail and a short bit later you are out onto the edge of the bluffs and the northern overlook. Enjoy the views of the mountains, Spyglass Hill on the far shore, Fashion Island, the marina at the bottom of the Upper Newport Bay (Back Bay) and the lower harbor.

Ride along the bluffs. There are two more view points and then the Marine Memorial, dedicated to the 1/1/1 Marine Division. Circle round the flag pole and head inland. The trail divides up ahead. The right fork takes you down to the trail end and parking lot. Across the street is Bob Hart Park, with parking, water and restrooms. If you want to loop the trail, head this way and then up the bike/walk to the other trail end at Westcliff and Dover.


@@@ FROM CASTAWAYS TO BACK BAY LOOP…

If you want to ride the Back Bay Loop Trail, turn left at the junction. Now the trail heads steeply downhill and you are enjoined to walk your bikes. How you walk a trike is uncertain. TB rode his down at a slow bell. At the bottom of the slope you are on a wide bike/walk leading down to the Coast Highway. Follow it and turn left, taking the bridge over the channel.
Continue on to the light at N. Bayside Dr. The bike/walk is on the far side of Bayside. Turn left and ride it to the gated entrance at the end. Here there is another bit of bike trail passing behind the trailer park and the RV campground. It will take you to Back Bay Dr.

Go left on Back Bay and now you are on a scenic bike lane with low speed traffic to the top of the bay and the observation point at Back Bay Dr. x Eastbluff Dr. Here you pick up the trail at the top of the bay. There are Mountains to the Sea signs. Ahead is the junction with the San Diego Creek Bikeway and miles of Irvine trails and more.