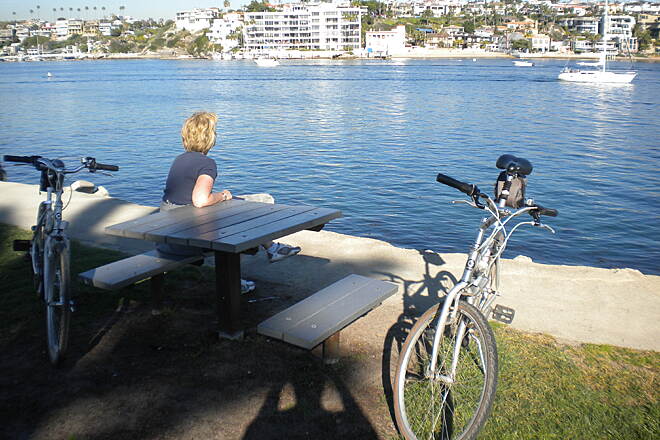 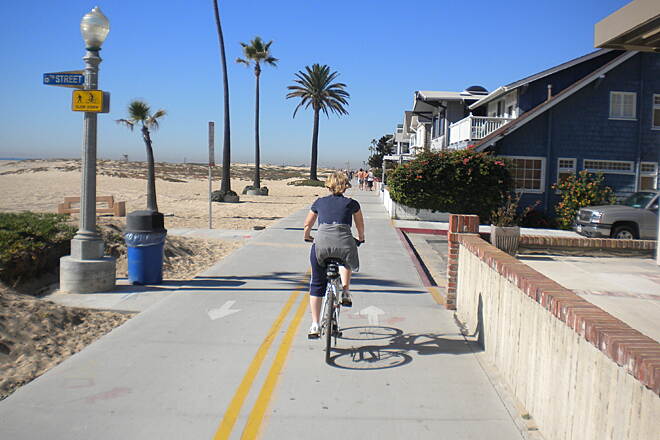 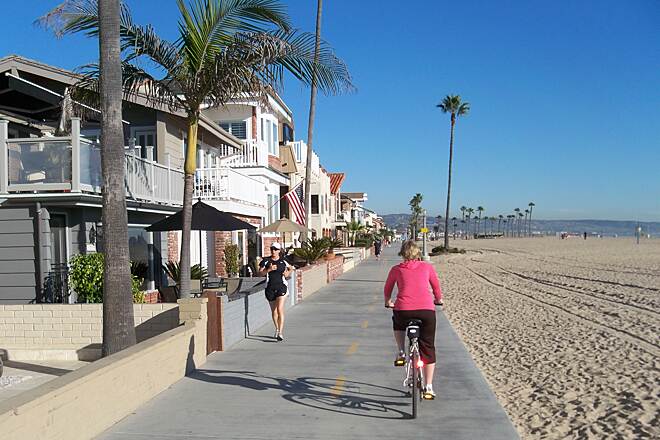 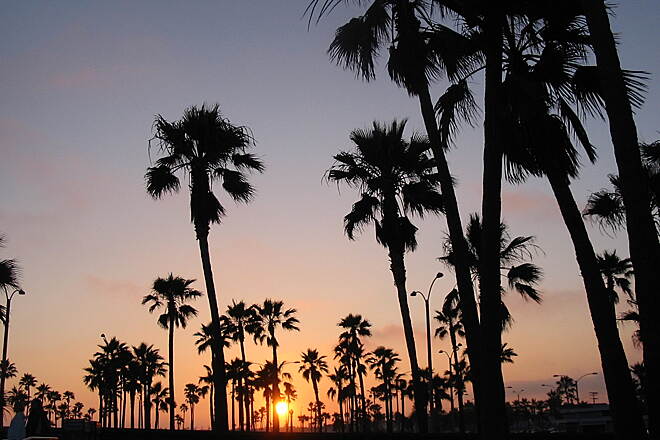 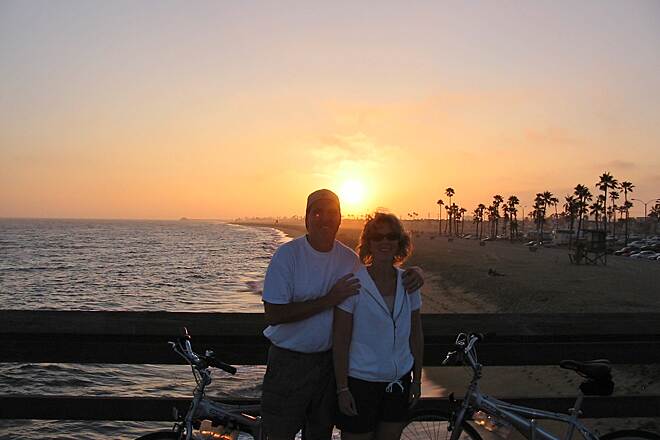 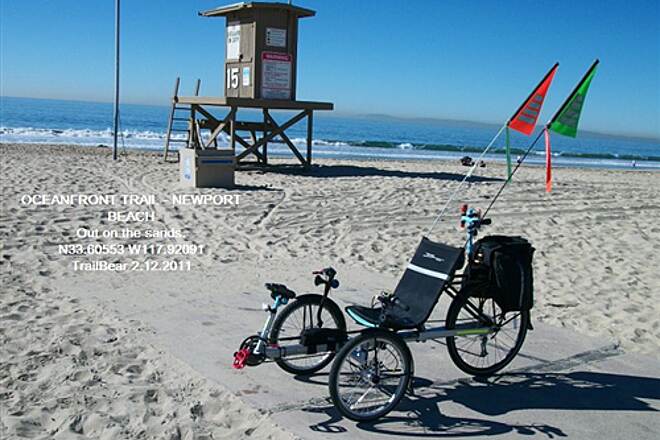 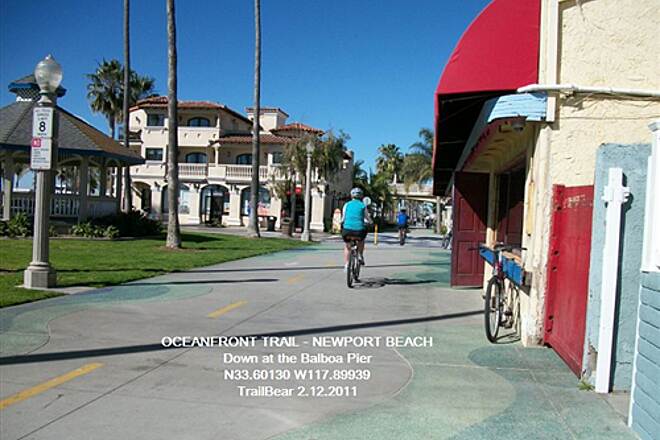 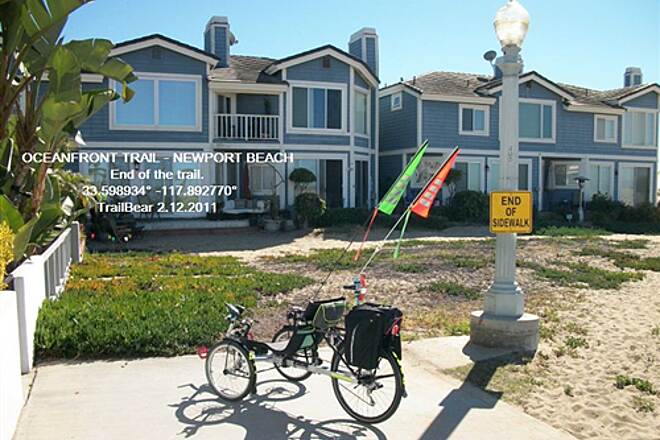 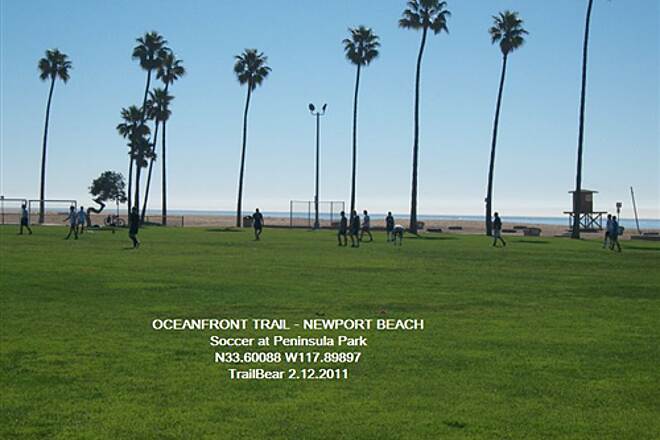 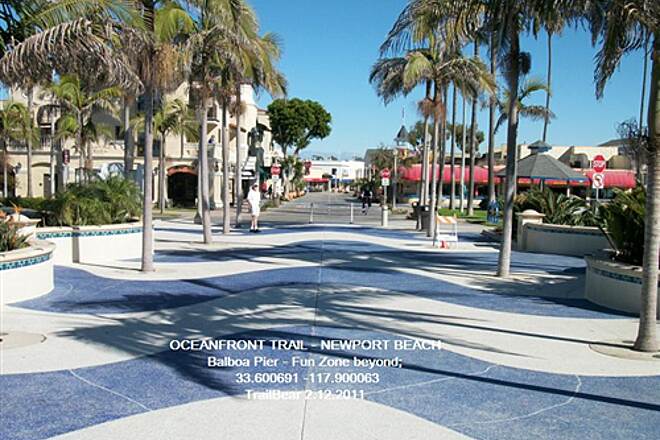 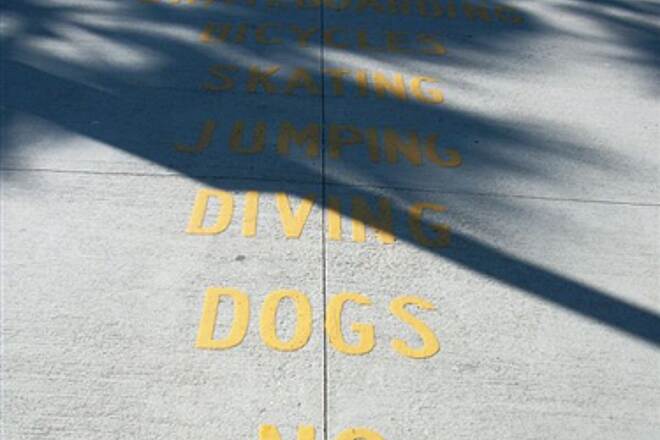 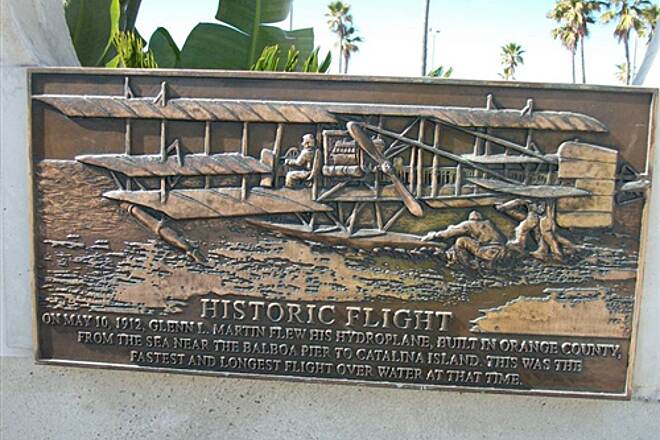 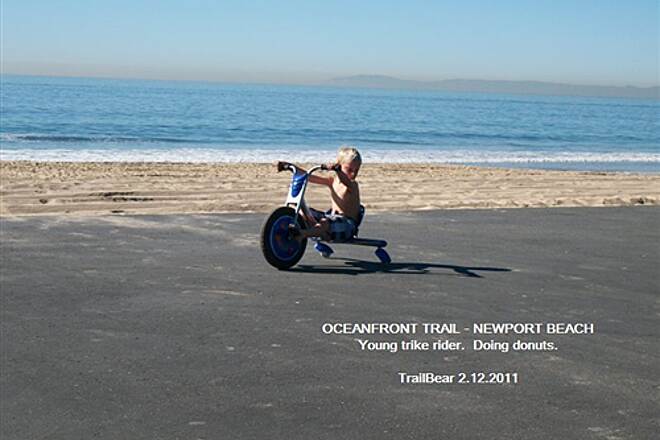 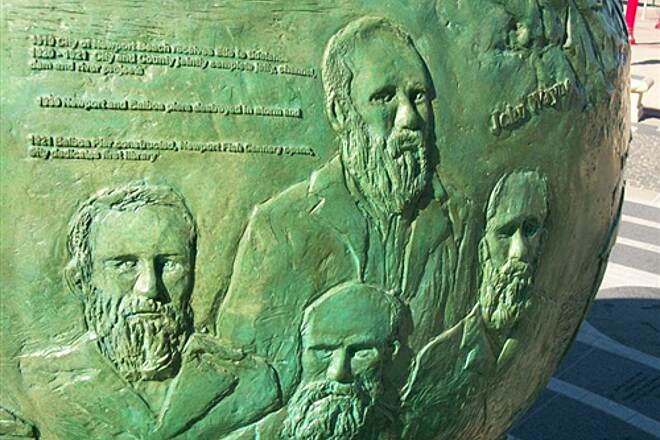 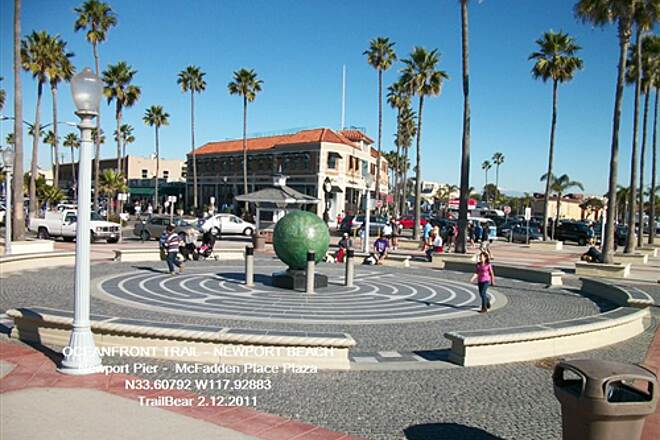 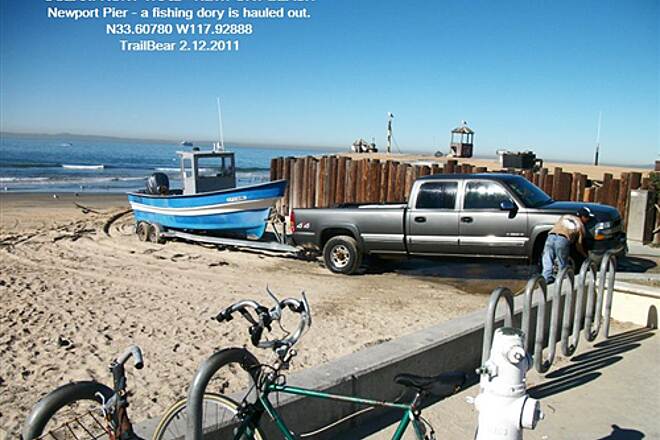 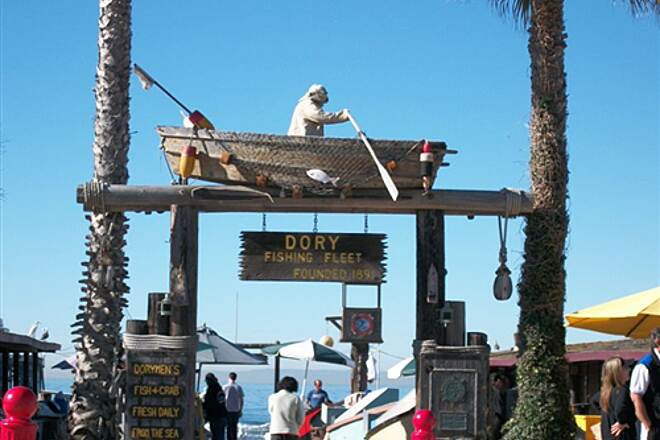 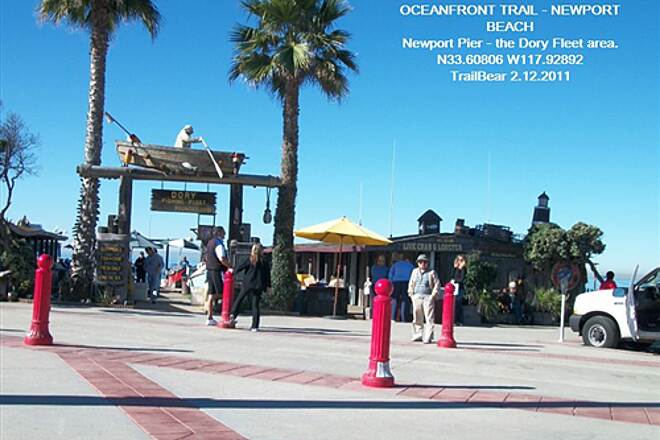 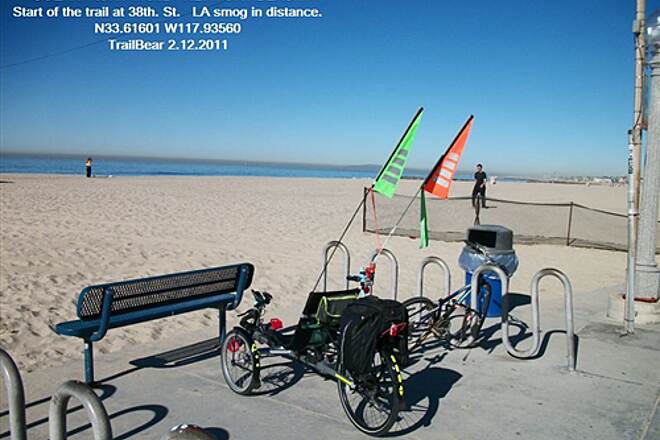 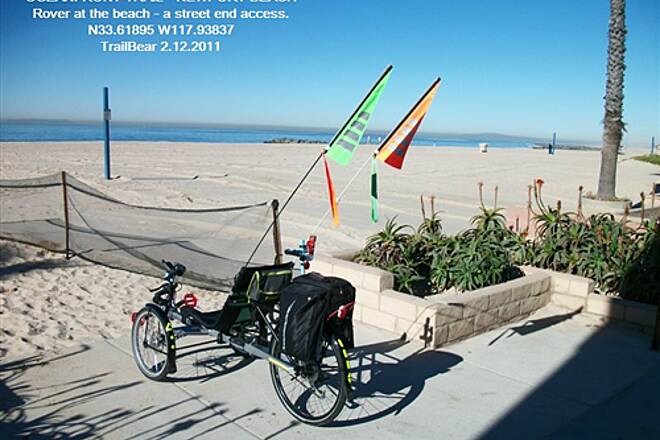 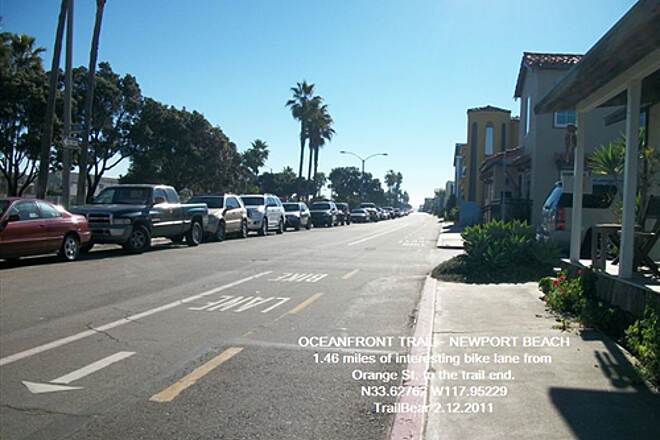 The Oceanfront Boardwalk begins in West Newport Beach at the end of 36th Street and runs nearly 3 miles down the Balboa Peninsula. Along the way, trail-goers will find restaurants, dory fishermen, upscale beachfront housing, and views of ocean and sand. Highlights of the trail include the historic Balboa Pier, constructed more than 100 years ago, and the Newport Pier, overlooking a beautiful beach. The popular trail is typically thronged with walkers and riders, so be prepared for a relaxing, slow-speed saunter through the scenery.

Alternatively, park at West Newport Park, which runs along the Pacific Coast Highway from the Santa Ana River to 57th Street. There is free on-street parking along Seashore Drive and paid parking in a series of city lots. Take the bike lane 1.5 miles down Seashore Drive to the start of the trail at 36th Street. Parking on the Balboa Peninsula is not recommended as it's limited and highly contested.

This path is an absolute gem, a classic I've ridden and walked so many times over the past forty years. It's so cool to have a wide, sandy beach on one side of the boardwalk and multi-million dollar ocean view residences on the other. (We like to park on a quiet street with very little traffic near The Wedge in Newport Beach, and then jump on the boardwalk at the southern trailhead).
The Oceanfront Boardwalk is only a few miles long, but we usually continue on up the coast and connect to the Huntington Beach Bicycle Trail to enjoy a longer ride.
Consider peddling beyond the end of the Huntington Beach Trail past Warner Avenue and then down the center of park-like Pacific Avenue for a few more miles. You'll be able to brag you pedaled all the way from Newport Bay to Huntington Harbor and back!

No better ride on the planet!

Stop for a Balboa Bar just at the end of the Newport Pier. Be prepared to ride 8 mph :-) You need a bike bell to let traffic know you're coming. Not too busy today. 10-11 a.m. ride on Wednesday in June.

TRIKES ON THE TRAIL: The Oceanfront Trail, Newport Beach, CA

TRIKES ON THE TRAIL: The Oceanfront Trail, Newport Beach, CA

But why here? The actual trail is 1.41 miles over yonder.

Several whys: Free on-street parking vs. $1/40 minutes in the city lots hereabouts (Yes, they seen ya comin’ and they’re layin’ for ya). We snag an open end space. Parking on the Balboa Peninsula is a challenge in winter. It is limited and the locals think they have some claims to it. Can you imagine?

In summer it is the Everest of Parking – plus the traffic goes into gridlock as a whole freeway filled with beachgoers from the sweltering interior dumps onto a few streets. Summer is also Rental Season – that time of year you can rent your Close to Beach shotgun house for $xxxx the week. Check it out on Google E. This is the Land of Close Living. Narrow lots, deep homes. Lots of people in season.

There is a nice little pocket park and restrooms across the street. This is the West Newport Park and it runs in a strip from the Santa Ana River down to 57th St. with a series of parking lots, green spaces, restrooms, tot lots and finally – tennis courts. (This is Newport Beach, after all. Anorexic bleach blondes in Mercedes coupes and tennis clothes are as common here as burka babes in Kabul.) Then there is the bike lane.

Seashore Drive is one way up to Orange. They made the other lane into a divided bike lane. It’s a fun ride from Orange to the trail. All sorts of interesting folk are on the bike lane – walkers, joggers, bikies, in-line skaters, dog walkers, etc.

The beach, some miles of it, is over there. You can see it at every street end you pass. However, there is no beachfront trail from the river to 38th St. There is no signage for the trail either. TB pedals onward until he notices a jogger crossing a street end. Pull in, take a look: We have trail.

Backtrack to the end and restart the GPS log. Log it as a trail end. Take photos. Record the waypoints on the digital voice recorder to match the waypoints on the map to the pix. If you geocode your photos, Traillink will post the thumbnails along the trail where they were taken. Great feature – you can do a mini tour from home.

It’s a fine sight from there. The seeing is good. Up coast is a brown ribbon of smog blowing out to sea from LA. Catalina Island is visible and down there is Newport Pier. TB remembers it well. When you are running the 10 fathom curve up the coast in fog and the bottom drops out of the soundings, you are crossing Newport Submarine Canyon, which heads just off the pier. The Santa Ana River came out here Once Upon a Time.

Set a course to the SE, down the trail. It is striped concrete with about 6’ lanes. Not overly broad, given the traffic loads. Here there be joggers, dog walkers, bikies on cruisers and beach beater bikes, some roadies in Suits of Light, walkers, kids on Razors, etc.

The Official Speed Limit is 8 mph. The actual speed is less in places because of traffic. You often have to come to a stop behind some strolling group, peer out and around and try to see what is oncoming before you pass. It’s a great trail for a trike. We don’t fall over at 0 mph. We just sit and TrikeSmile.

There are miles of white sands to the right and beach “cottages” to the left. (Think $millions.) They live in the public eye. Their patios open right onto the trail. What is it like to have thousands of people wandering past your front yard? I suppose you could sit there, look at the view look at the madding crowd and think: I’m living on the beach in Newport Beach. Got mine. Sucks to be you.

The first big attraction on the trail is Newport Pier. In the Olden Days it was McFadden Wharf and a shipping point for the produce of the interior. Think: citrus from Orange and Riverside Counties, etc.

The wharf was taken out in the Chubasco of 1939. We do catch the rare Mexican hurricane up here. Now the rebuilt pier is a tourist attraction – and an attractive one. There is the Dory Fisherman market where real life fishermen who fish from that ocean out there in dories sell their catch to you. There are restaurants on the pier, cutsie shops, and an attractive plaza with the Ball of Newport Beach History in the center. You can relax on your trike and watch the people.

TB watches a real live dory fisherman haul his dory out over the sand. A 4x4 truck works well here. With a surf running, what do they do? But enough, onward.

From Newport Pier onward, we are out on the Balboa Peninsula. This is a sand spit with very pricey real estate thereupon. A number of fine yacht clubs are on the interior side of the spit. The homes run for more than the French war debt.

Here the girls are playing sand soccer. Here is the Newport Elementary School and across the trail is a large blacktop area with basketball courts. Here also is a Young Triker on what is probably the ICE version of a Big Wheels delta trike. His stern wheels are on a spar and look like casters. He can turn in his own radius. He is doing a series of donuts across the tarmac.

Here is the last Big Attraction on the trail. You are entering the Fun Zone. The pier and attractions is on the ocean side. On the leeward side is the Balboa Fun Zone with attractions, arcades, eateries, art galleries and the Balboa Ferry – going to Balboa Island. Sailing out of the harbor, you should remember that the Balboa Ferry gives way to neither God nor man. You do the ducking.

Ride on another four blocks and it’s over. End of trail. If you want to see The Wedge and the surfers, take to surface streets. Try E. Ocean Blvd, two rows of homes back of the beach and out of the main traffic. It comes out at Jetty View Park. You can sit there where the beach meets the breakwater and watch the surfers to the right and the boaters to the left.

TrailBear
Riding in comfort on his Rover X5 trike