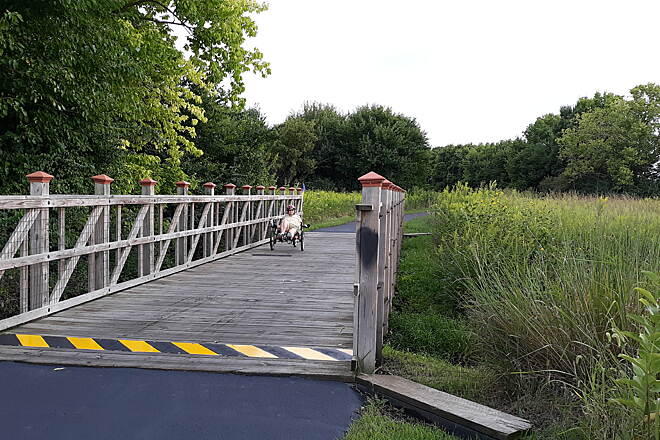 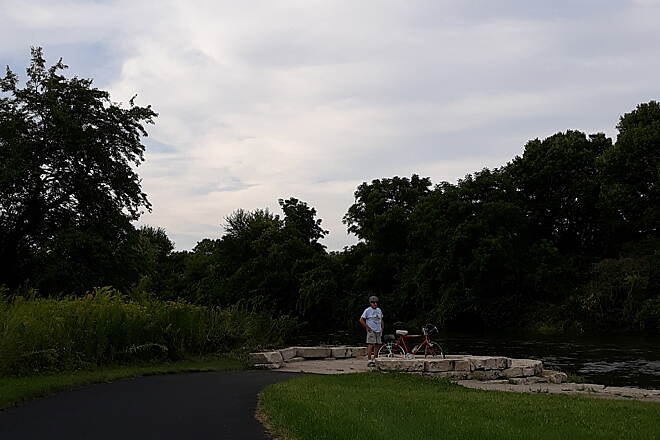 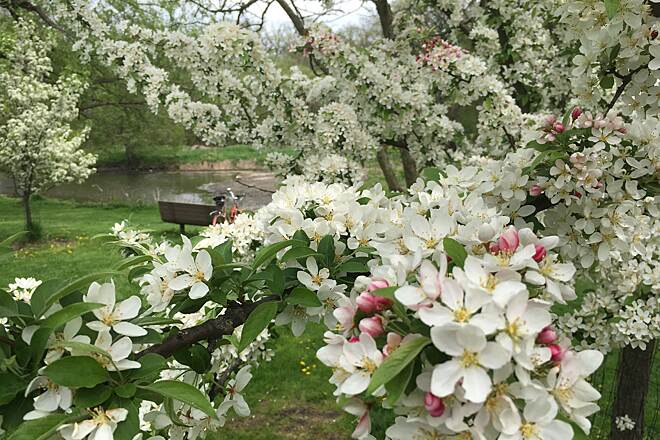 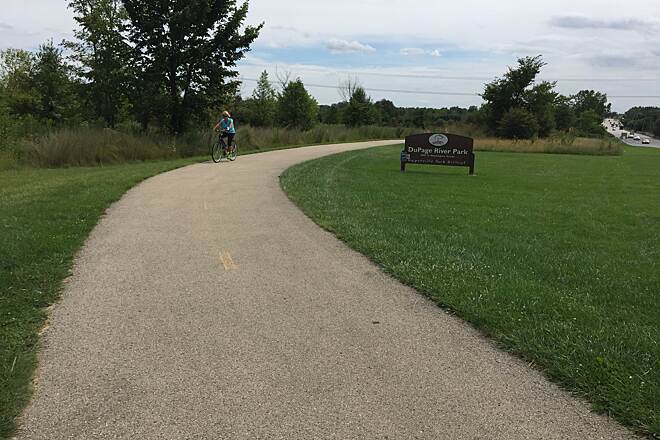 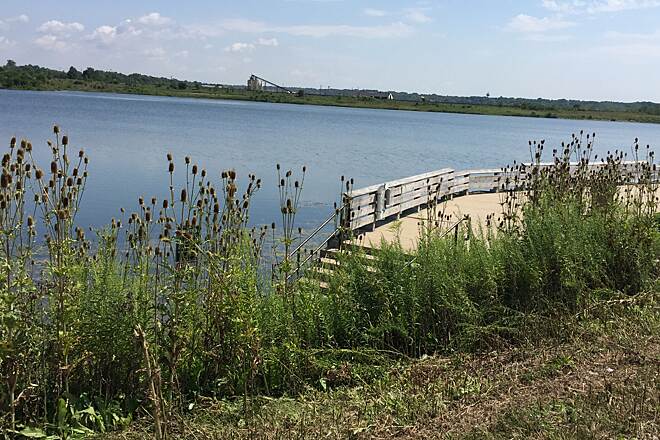 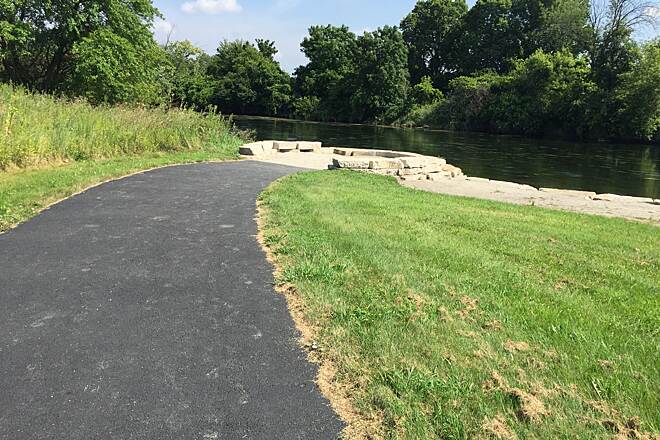 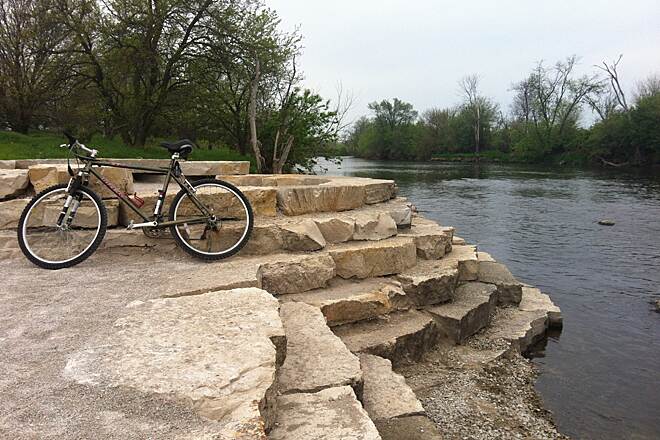 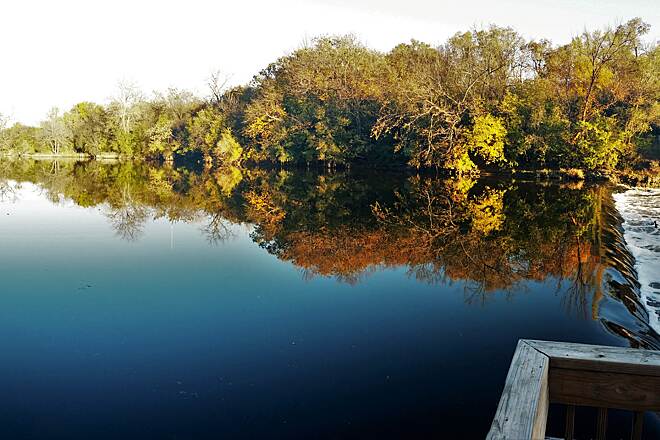 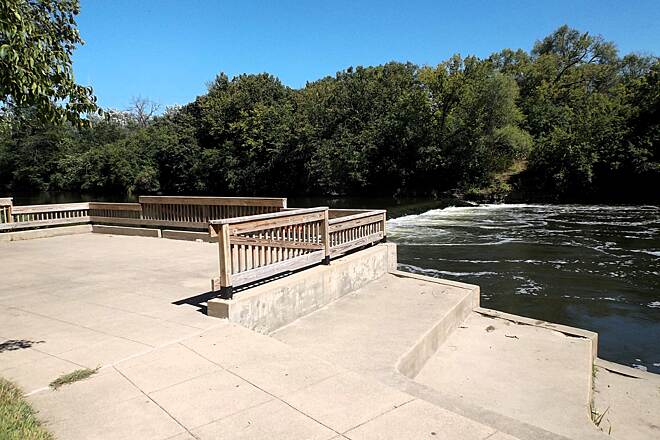 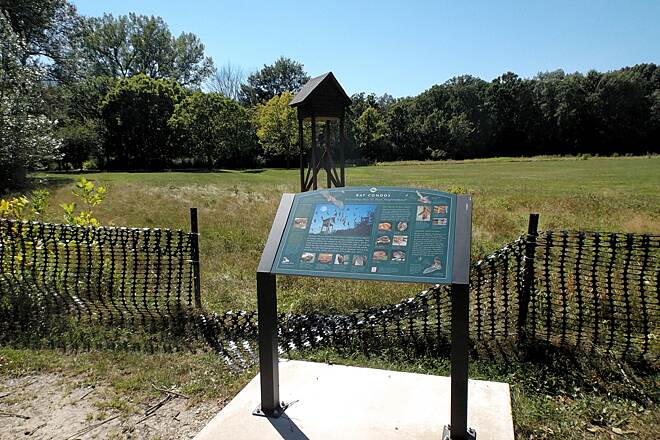 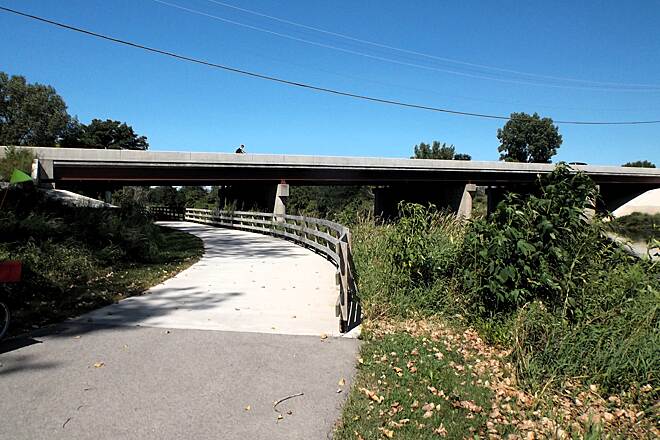 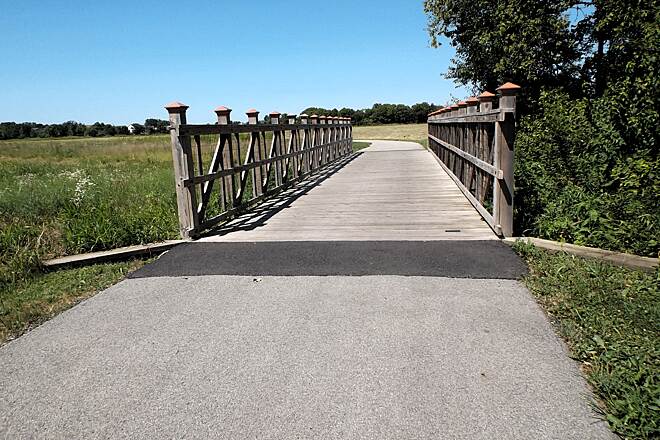 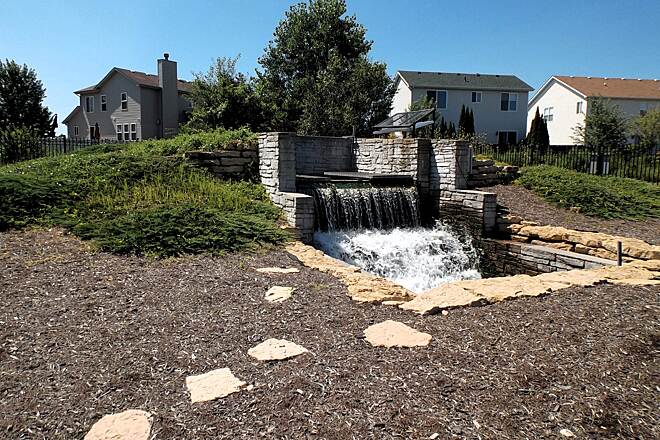 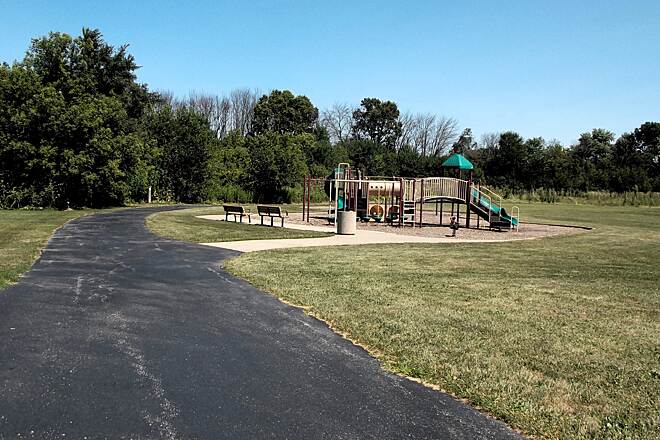 The DuPage River Trail spans over 30 miles across two counties: DuPage and Will. It's currently open in several disconnected segments mainly in parks and forest preserves beginning in Warrenville and traveling south through Naperville, Bolingbrook, Plainfield, and Shorewood. On its northern end, it also connects with the Illinois Prairie Path, a notable 61-mile pathway in the Rail-Trail Hall of Fame.

A trailside attraction in Bolingbrook is Hidden Lakes Historic Trout Farm. Fishing is allowed in this beautiful park with a permit. The ponds are stocked with trout in April and October, and with catfish from May through September.

The southernmost segment begins at Sunset Parkway, where the trail is almost entirely open and flat across a floodplain of the adjacent DuPage River. Along the way, there’s a trail spur with a decorative waterfall and a small rest area with river overview.

Approaching Black Road in Shorewood, the main trail descends to go under the road bridge, next to the river. There is an alternate grade-level crossing of Black Road just to the west, one that can be used when the lower crossing is closed due to flooding. But traffic is often heavy on Black Road and there is no stop light to make that crossing easier and safer.

Once south of Black Road, the remainder of the trail is in beautiful Hammel Woods. The woods entirely cover the trail here, as it moves forward over some gently rolling hills. It passes by two large park areas, the second of which has a most interesting information plaque and display of its Bat Condos. Arriving at the southern trail end, one can proceed across a short bridge to still another park area or on to a picturesque overlook area next to a small dam across the river.

From north to south, parking is available in:

Parking is also available at four areas in Hammel Woods:

This trail is inaccurately described as asphalt. It is partially asphalt and crushed stone. The trail is poorly marked and has too many interactions with busy roads to cross. Would not recommend for any attempt of a long distance ride as not enjoyable.

Don’t know why we did not investigate this section of the trail sooner.

My husband and I rode this trail for the first time. We rode the Naperville and Bolingbrook sections many times. This section is as good. It has large portions with shade. Several toilets. Picnic tables. A dog park. Picturesque photo op trail branches. One drawback: dog poop. Strangly enough, not near the dog park. The poop is scattered 30 ft or so on either side of access points. No reason for it, because free bags are provided at each access point. Good thing dog walkers are too lazy to walk any farther. We will go back. The poop is not enough to keep us away. Also, we saw a police 🚔 patroling the trail.

Nice now, and will be much better when fully connected

The trail from Knock Knolls to Lake Whalon in Bolingbrook is also great, with a lot of good scenery and wildlife along the way.

There are points through downtown Naperville that doesn't allow bicycles. Otherwise I nice trail.

disappointed - trial not marked, Joliet not supprting of the trail

From descriptions, we thought we could start from Hammel woods and bike either North or South.
While Hammel woods part of trail is nice, it is small, and once you leave, Joliet doesn't give you any guidance where to go on roads to connect up with next section of trail.
In fact, coming out of Hammel Woods on the North into a subdivision in Joliet, Joliet wouldn't even cut the curt - trail ends abruptly at a curb! If you don't see it coming, easy to bend/bust your rim going hard over the curb.
I'm used to riding on trails where towns care about the trail, bikers, and visitors.
Never will ride in Joliet again, or spend money there.

This trail is divided into several sections so my review will be divided as well.

Downtown Naperville - Knoch Knolls Nature Center
This section is very nice, much of it follows the DuPage River and you are in shade trees. In downtown Naperville you are on streets for a short period and must follow the signs. Then the trail becomes a beautiful paved path along the river. Highly recommended.

Knoch Knolls Nature Center - to Rt 53 and Royce Road
This is a well maintained, beautiful trail through both woods and prairie. I like this stretch because you are away from the road and on a paved trail. It circles a small lake (Whalon Lake), passes by a trout lake and the scenery is beautiful throughout your ride.

Hassert Road (111th) in Riverview Farmstead
Very short, but nice. I live right by this part so I am on it all of the time...probably not worth a trip here because it is so short.

Stretch in Plainfield along the DuPage River
I started in a subdivision (GPS location: 1713 Parkview Dr. Plainfiled) This trail is worth the trip. It is a mix of riding through prairie and woods along the river. I went during the week so it wasn't crowded, but I can see where this trail could be busy. Very few hills so it is an easy ride. I rode from my starting point to where the trail ends at route 52 and then back again, only about 7.5 miles. There are points along the river to stop and take in the view. The trail goes under W Black road so you don't have to worry about crossing that busy road. If you don't want to start where I did, there are numerous parking areas in the forest preserve. Very nice.

My husband and I have a road tandem. This trail was perfect for us. There are very few busy road crossings (watch for cars turning right into your path......they don't watch for you). We rode on a friday and it was perfect. I think it might be busier than we would like on the weekend. A lot of twists and turns, which we like, but would definitely slow you down with more traffic on a weekend. Not many hills (would have liked a few more) but we didn't do the whole ride. The southern most entrance point does not begin on the trail. Avoid that unless you want to travel with GPS through neighborhoods. The next entrance point begins on the trail but if you don't cross the wooden bridge you dead end (we did that... added distance to our trip, but that's OK). I think the trail would benefit from some signs or off ramps that lead to a cafe or restaurant or coffee shop. Overall, this is the best trail we have done yet and we will definitely go back!

I hope I'm still around to ride this entire trail when it's finished. The first section through Hammel Woods is really delightful! A good, safe underpass at Black Road. Excellent parking and rest areas. Peaceful overviews of the river. A very nice visit with nature.