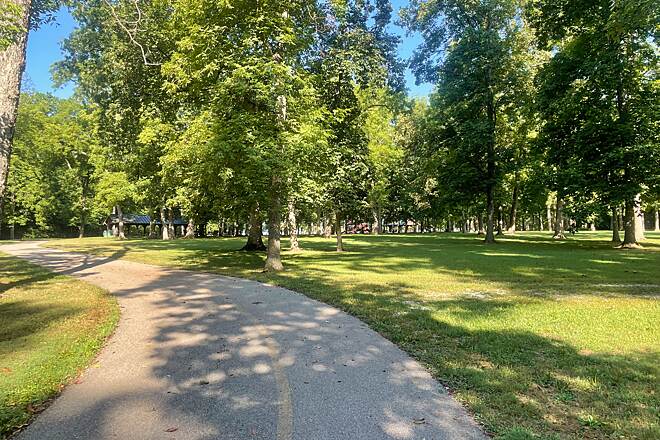 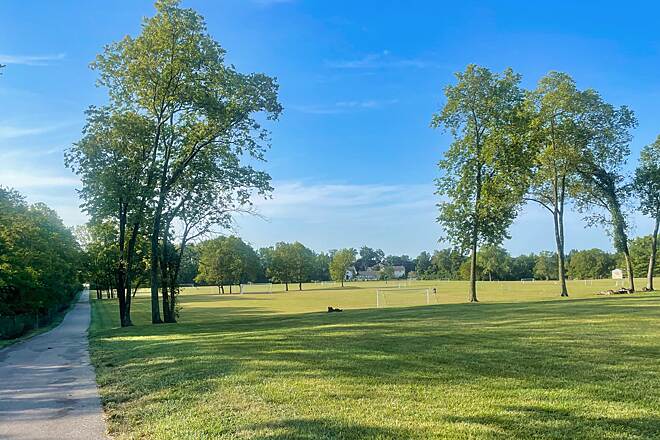 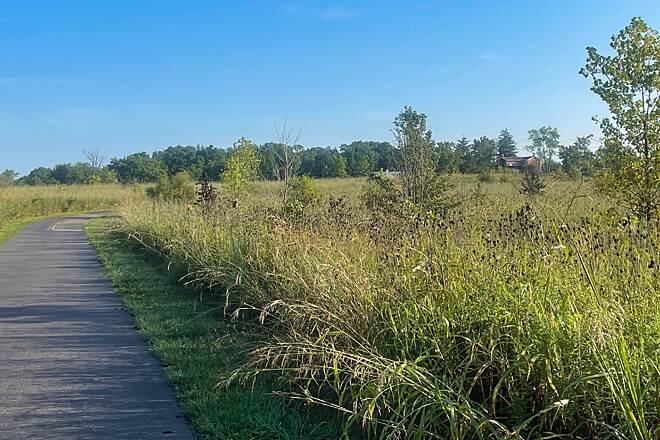 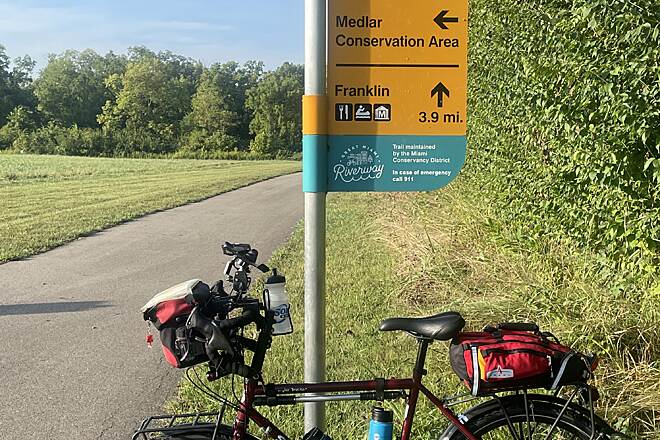 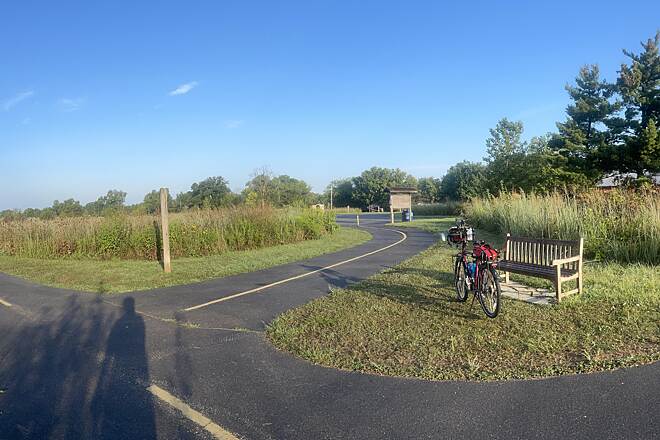 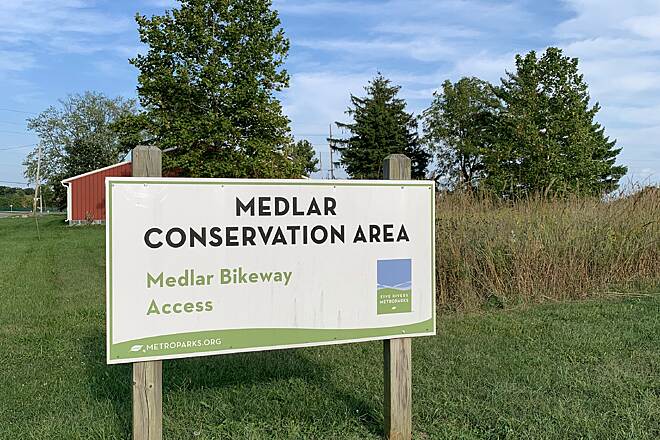 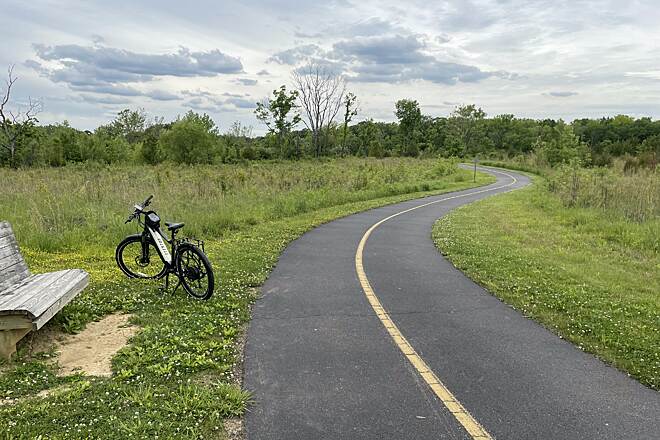 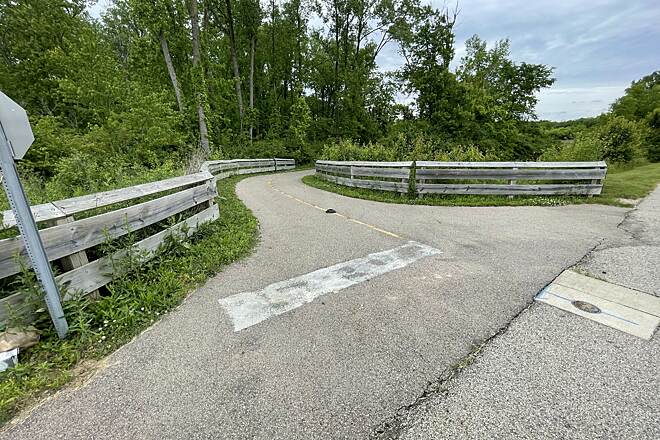 How can a trail be great and little? When it connects two of the Miami Valley's most popular regional trails, the Great Miami River Trail in the west, to the Little Miami Scenic Trail in the east. The Great-Little Trail is a ribbon of smooth asphalt, branching off from the Great Miami River Trail just north of Crains Run Park. The trail heads east, traversing the Medlar Preserve. The 2.5-mile section through the preserve involves challenging climbs through mature woodlands, and relaxing rides across fields and shrublands.

Cross the Miamisburg Springboro Pike and ride the edge of Medlar View Elementary down to Byers Road. From Byers, the trail heads east, paralleling the wide Austin Boulevard. After passing over I-75, the trail comes to the Austin Landing retail district with its mix of department stores and restaurants.

Continue along Austin Boulevard/ Austin Pike to Social Row Road. The paved path parallels Social Row Road, whein Washington Township, where it comes to an unceremonious end. Plans are underway to extend the trail through Butler and Warren Counties until it reaches the Little Miami Scenic Trail.

Parking is free at the Medlar Preserve (4558 Medlar Rd, Miamisburg).

A Good Start to a Key Trail Connector

This is a trail of considerable contrast. The central part of the current trail encircles Austin Landing, a mixed-use retail district that includes retail stores, restaurants, motels, office buildings and contemporary apartments. There is lots of traffic in and around this mall as commuters enter and exit Interstate 75 at adjoining Exit 41. The trail along Austin Pike (or Boulevard, in front of the Mall) is very busy. At each intersection between trail and roadways there are crossing buttons at the crosswalks. However, with the exception of the crossing at the intersection with Springboro Pike none of these buttons work. You’ll just have to wait for the automated timing for the crosswalk signals to activate in order to cross these streets and highway ramps. My suggestion is to avoid riding along Austin Boulevard as much as possible by riding the portion of the trail that loops around Austin Landing.

There is much less traffic as you move toward either the current eastern or western end of the trail. To the east you will ride around the Miamisburg Soccer Association soccer fields and then through the Medlar Conservation Area. The conservation area is a preserve of over 400 acres that contains mature woods, fields, shrub-scrub habitat and wetlands that protects some of the last quality open space in southern Montgomery County. When you enter the Medlar Conservation Area after coming from Austin Landing it’s like you are in an entirely different world. The trail meanders through this preserve as it makes its way toward the Great Miami River Trail on the eastern bank of the Great Miami River. Once you enter the Medlar you will quickly become aware that you are dropping in elevation. That's not so bad if you are only traveling westward, but challenging if you know you will have to climb back out to return to your start. Fortunately, the planners of this trail put in enough switchbacks into this portion of the trail to make the climb reasonable for most adult riders. Young children would find this climb difficult.

The trail east of Austin Landing runs for about 2 miles along Austin Boulevard/Pike. This portion of the trail is less developed and mostly residential. It passes by Dayton Wright Brothers Airport, a small public civil aviation airport, and ends near Robert F. Mays Park in Washington Township, Ohio. This trail is intended to connect the Great Miami River Trail with the Little Miami Scenic Trail. The trail will be extended further east into either Greene or Warren County depending on the route selected to connect it to the Little Miami Scenic Trail. When this connection between the two river trails will be completed is unknown at this time.